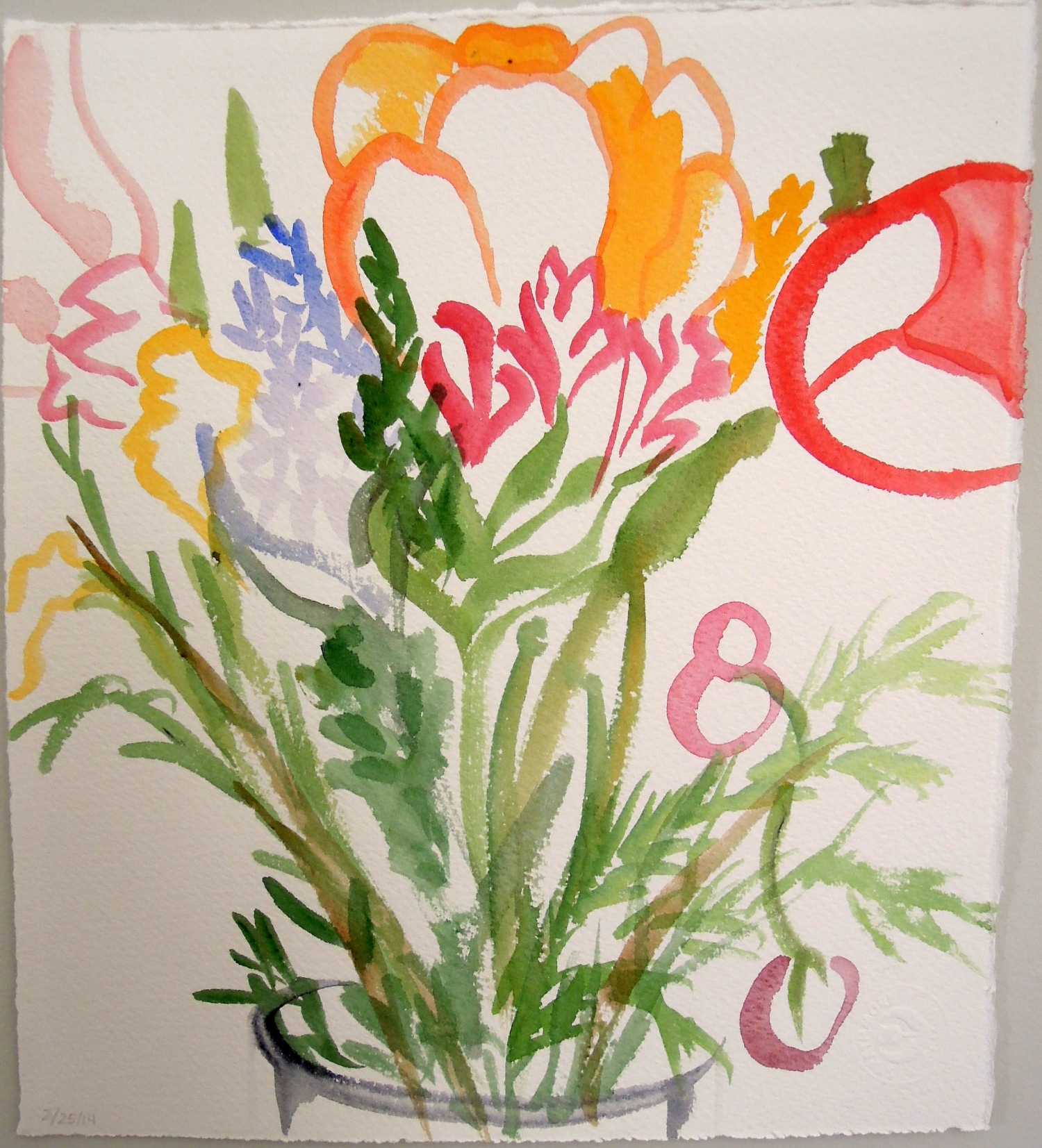 The other day I asked Erik, “Do you feel like we live here?” He thought a moment, and replied, “Yes… but it also kind of feels like this could be another AirBnB.” I said, “That’s how I feel too.” The flip side to living in other people’s places for two years and making them all feel like home, is that now that we are home, it still feels… not temporary, not worse than home, but somehow lighter than my accustomed sense of home — as if our roots had spread broad and shallow, rather than feet deep into a single spot of earth. Which makes perfect sense, and I like it, but still there’s something mildly unnerving about it, like floating on the surface of the ocean when what you’re used to is solid ground.

Some more glimpses of where we live now:

the happy chair + a stool bought this weekend from an estate sale
(it serves to hold my water or tea when I’m reading)
I haven’t decorated this spot, because if we decide to bring in the piano, it will go here.

flowers from the farmers’ market,
bin to transfer to compost,
French drinking glass (99¢ at Goodwill!) 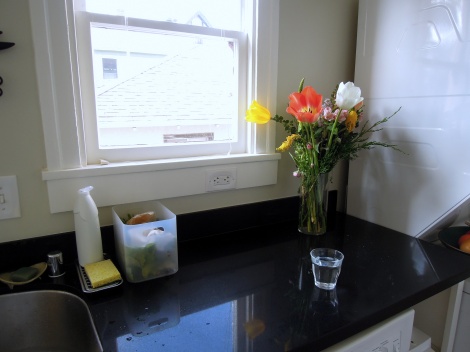 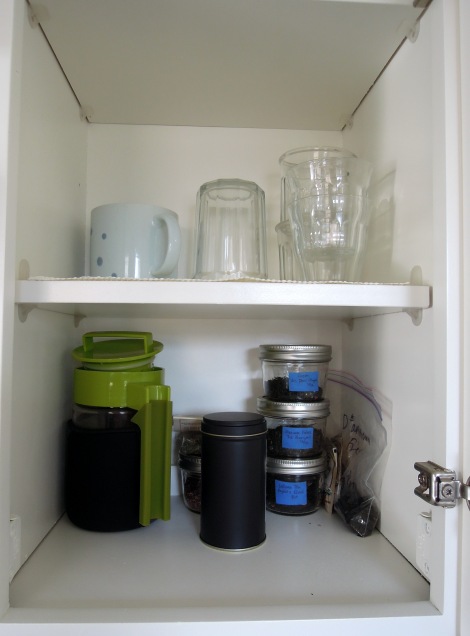 I haven’t been able to get the labels off everything.
Nor will I make myself crazy, trying.
But I still think some label-removal goes a long way. 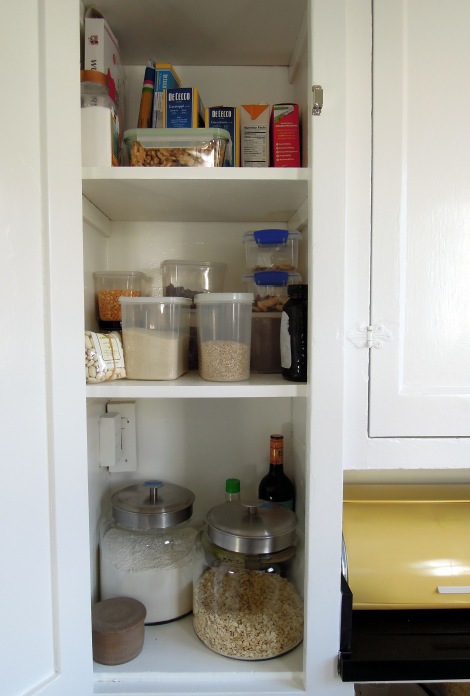 A month ago, when we were in Vero Beach visiting Erik’s aunt and uncle, Auntie suggested I buy myself flowers every week, to paint. “Then, in a year, you will have 52 paintings!” I don’t know if I will do it every week, but I do like the idea of a year of flowers. 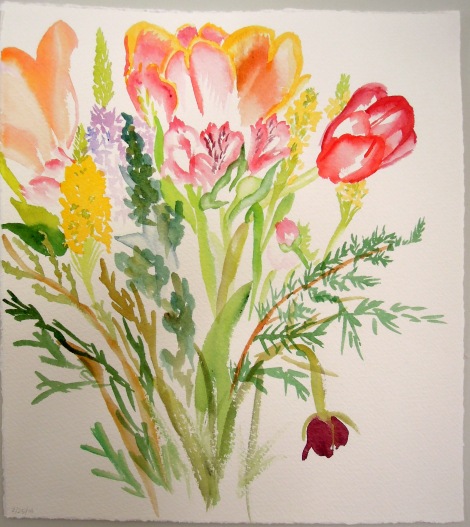 I thought the above sketch was overdone, so I did a faster one too, but now I like the first one better.

They look good on our wall. I notice that this wall color — a rather strange green-grey that is almost more of a neutral than a color — really showcases any artwork that has green in it. 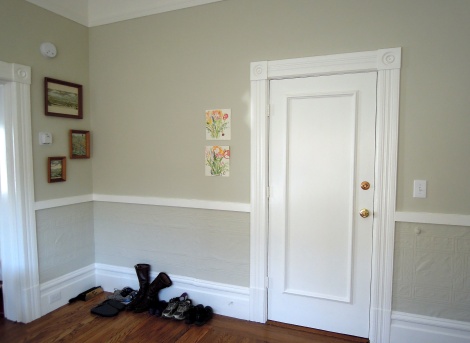 I was trying out a cool print of a 19th-century map of London — bought at Sir John Soane’s Museum in Lincoln’s Inn Fields — on that same spot on the wall, but I think it’s too small. I stashed it in my closet, though, and may bring it back at some point, once I have something to go next to it.

I wrote in my journal this morning: “I feel as if I have been playing homemaker ever since we moved here, and now I’m ready to hand those reins over to someone else so I can get some work done. But there is no one else, and in the meantime there still is cooking and cleaning that must get done.” Truly, not only has most of my energy gone to nesting, I’ve also been busy with domestic activities, especially cooking. Today I made arugula pesto.* On Sunday I shelled two pounds of walnuts (some of them went into the pesto). Yesterday I made my own paneer, my first foray into cheese-making:

draining the curds (alas, I spilled some!) 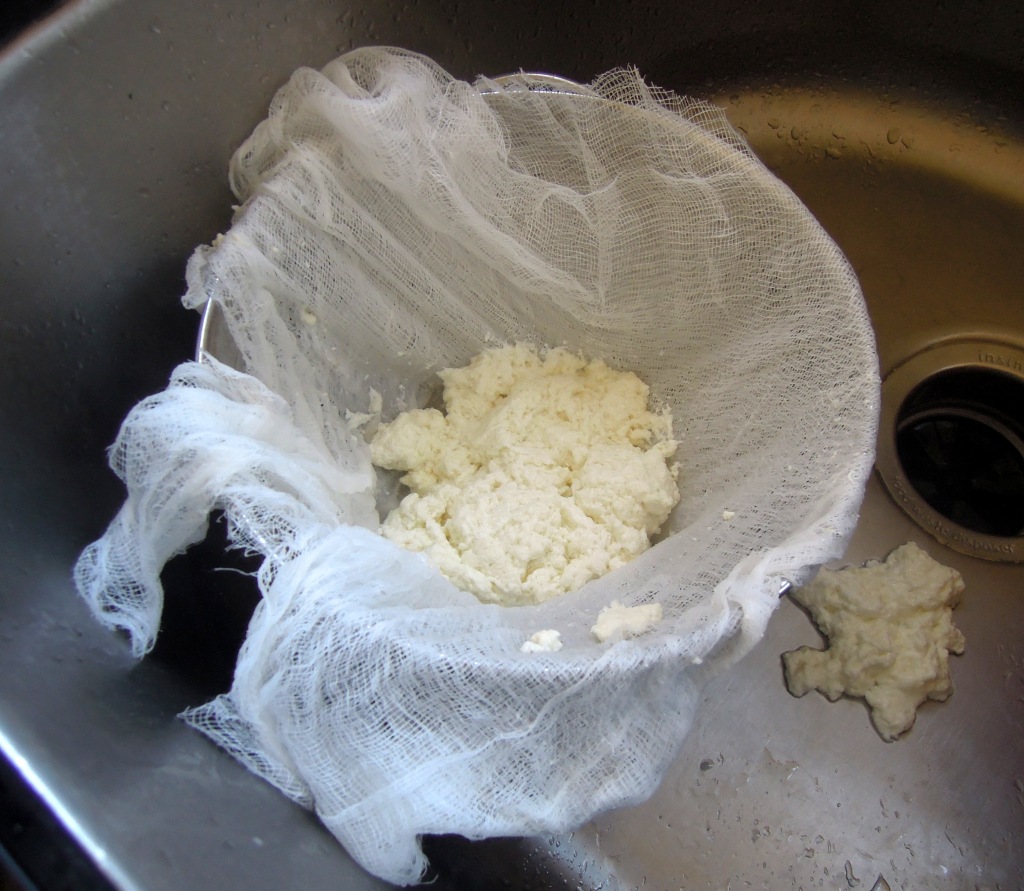 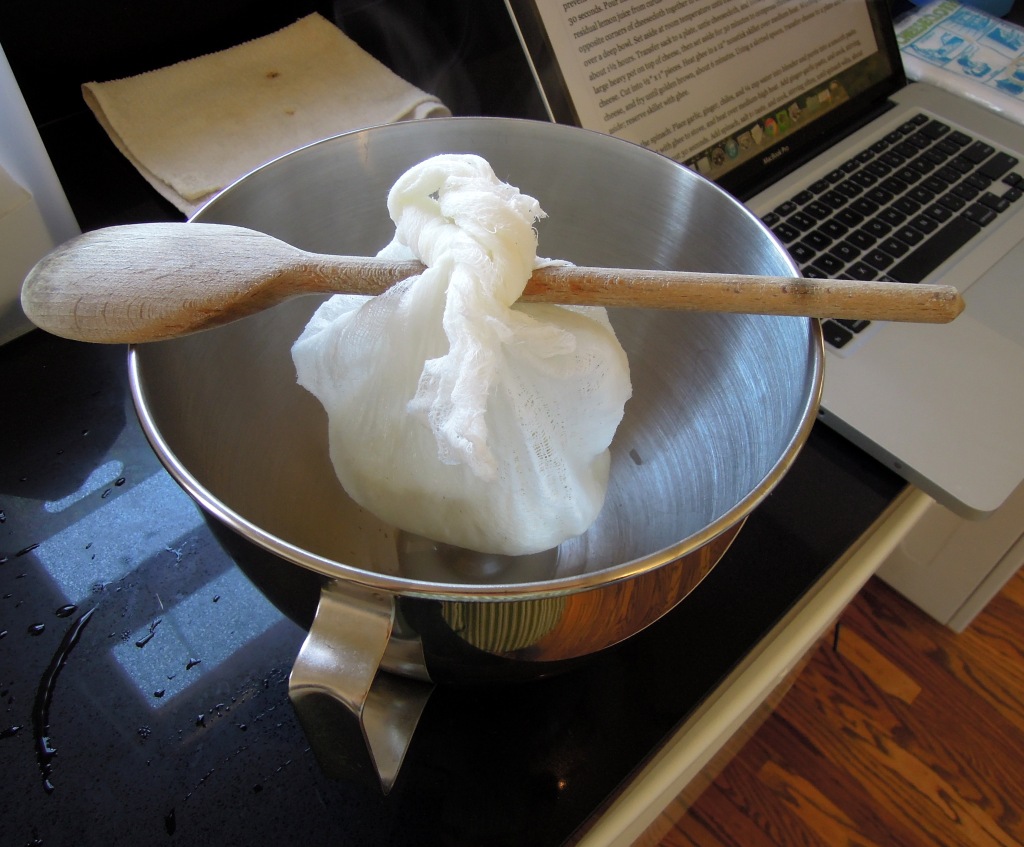 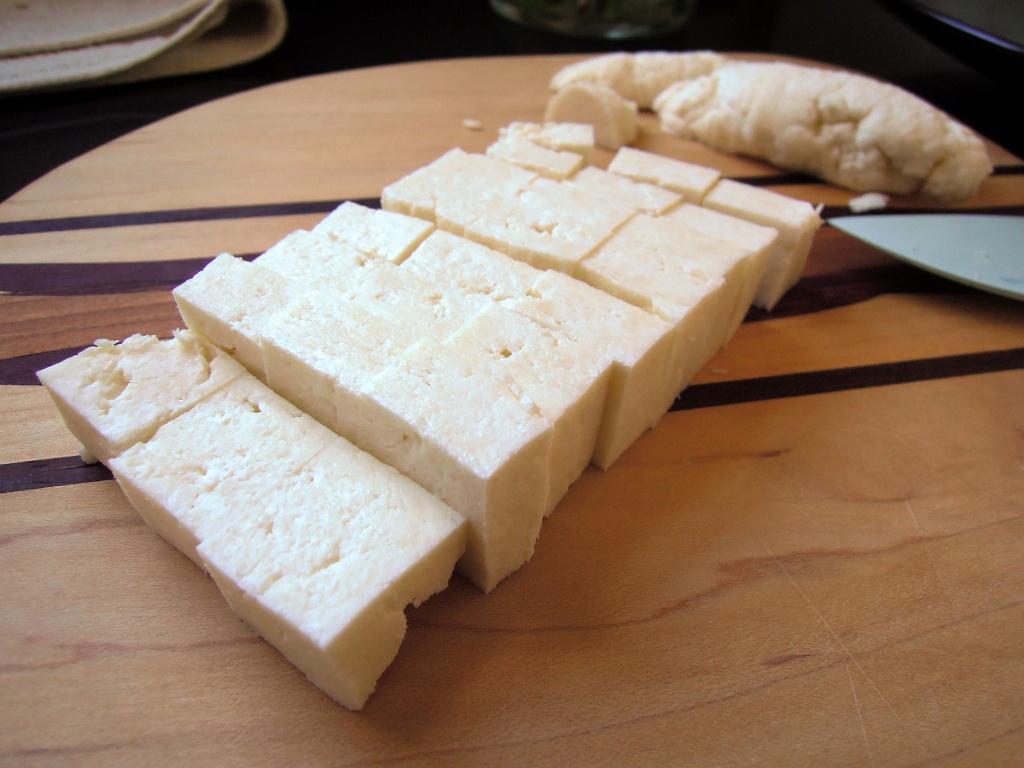 fried in ghee and placed in a dish made by our Boston neighbor, Jim Shea

The paneer was great, but my stomach was miserable last night, so I’m not sure what that means. Erik was fine, and I do have a temperamental digestive system, but… yikes. And of course I’m craving more saag paneer today, but am now afraid to eat the leftovers!

I notice I often get very domestic while we settle into a new place, and I think it’s because I find it easier to cook elaborate meals than to rebuild an already-weak creative habit. Of course it’s a question of practice; I’ve been cooking and baking for much longer than I have been painting or writing seriously, and so I’d rather make my own pasta than sit down and work on, say, a fiction project. And we have to eat anyway, so I justify it. But when my best and most frequent creative energy goes into meal-planning or the acquiring of new furniture or home goods, I feel a great sense of surface peace, troubled by an internal emptiness, a fear of not fulfilling myself. Whereas if I paint for even just an hour — as I did with those flower sketches, above — I feel good about myself (and it doesn’t bother me as much if I resort to eating frozen meatballs).** I’m trying not to torment myself with self-chastising, as I’ve done in the past, but I do want to push myself a little more in the direction of art-making.

*Lest you think I’m all modern-homesteader, though, the pesto went with a hefty serving of frozen meatballs from Ikea. I don’t like to buy prepared foods, but we have now been to Ikea twice, furniture-shopping, and each time I go there I just want to eat all the meatballs. When we were buying the bed frame I finally decided to just go for it, otherwise I’d keep thinking about them. Actually I can make perfectly good meatballs myself, but naturally, it’s the Ikea ones I wanted! I ate ten of them and still kind of want more!

**On the other hand, my previous week of diligent cooking means I didn’t just eat frozen meatballs today — I also had delicious homemade chicken soup, with noodles. The meatballs were, frankly, just for fun… and because I lacked the power to resist them.