Erik’s aunt and uncle live in Vero Beach, a few hours’ drive from Tampa. Over the weekend we went to visit them and see a little more of Florida.

It wasn’t a very exciting drive cross-state (west to east), though there were a few highlights. One stretch of freeway was signposted: “Panther crossing next 13 miles.” Along another stretch, there was a man in a pickup truck, selling oranges, honey, strawberries, and alligator jerky. One town was having a bluegrass festival, which I would have liked to investigate, but we didn’t have time to stop. In one strip mall I noticed a restaurant called China Wok; in the next, a China Pearl; in the next, China Garden. We speculated about the next one (China Palace? House?) but there was no next.

Vero Beach is a small city of about the same population as Temple Terrace (where we’ve been staying), and it boasts an art museum, a performing arts center, an attractive downtown right on the oceanfront, and a neighborhood that is, so Uncle told us, the fifth-most expensive zip code in the country (he was quick to point out that they do not live in that district!). The Vero Beach wikipedia entry also yields these intriguing facts: in 2009, near the beach, scientists found a carving of a mammoth or mastodon that may be the oldest art to come from the Americas; in 2007, a man shopping at a local mall found $5,200 inside a shoe. Apparently it’s a good place for finding things.

Upon our arrival, Auntie and Uncle took us out to lunch, then showed us around their house (nearly every wall surface covered with Auntie’s colorful paintings) and garden (Uncle’s “jungle” and his clear pride and joy). 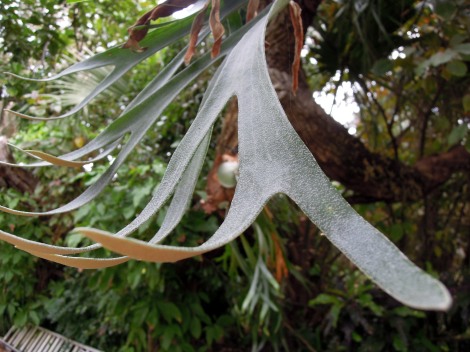 It reminded me of forests in Hawaii, only with grassy walkways.

I stood in the middle of it for a short while, sketching, until I got a bug bite and realized I was too tempting a target. 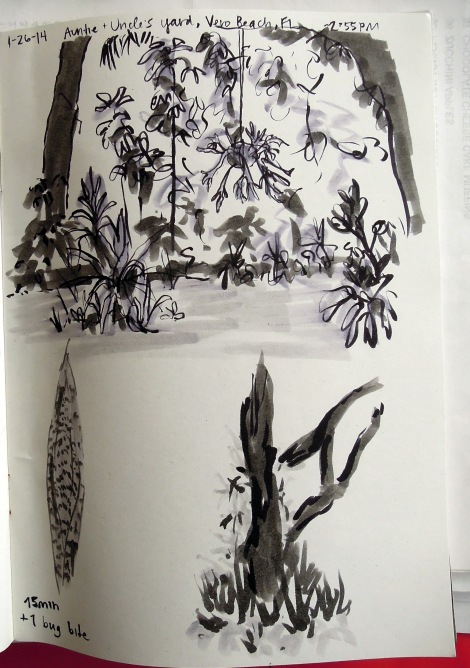 I then retreated indoors, where I stood and sketched the front room. I really enjoy interior sketches. In my mind, they are portraits too.

Auntie watched me draw, and declared herself impressed by my speed. She showed me a bouquet of fresh flowers and said she wanted to see what I could do with that, quickly. I got out my paints.

I am pleased with the shape of the pink flowers on the right. I think they are called alstroemeria. It’s not quite their shape but it evokes it nicely.

Ultimately we didn’t have time to visit the beach, but we did make time the next morning for a walk along the pedestrian bridge that crosses the Indian River. From the house it is a perfect two-mile walk across the bridge and back.

Two more weeks in Florida. Tomorrow evening I’m going to try cooking some alligator tenderloins (available at a local farmers’ market). This weekend we are going with our friends to Miami, where Ståle will run the marathon, and Ying and Erik, the 5K; we’ll also celebrate the Lunar New Year. Sometime before we leave I intend to paint Ying’s portrait (I’d do Ståle’s too, but he says he can’t sit still that long). And then it will be back to the Bay Area. I am getting very impatient to start moving into our new apartment.

It is so good to have so many things to look forward to!