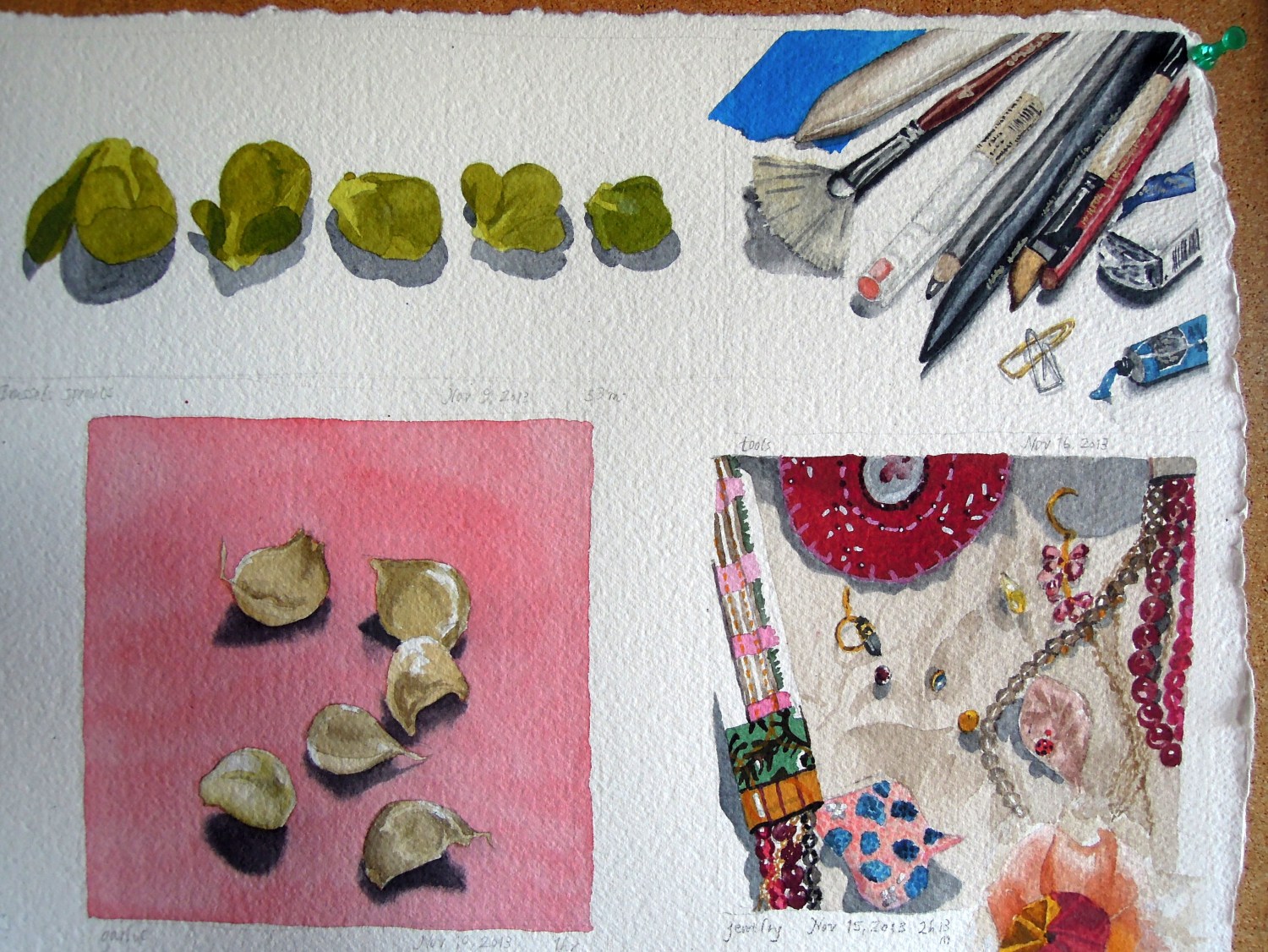 The big sheet is complete! And it only took about eighteen hours! (That “only” is spoken with tongue firmly in cheek, in case that wasn’t clear. Not that eighteen hours is an epoch, but it’s more than twice the length of my previous biggest watercolor undertaking.)

Not only am I very very pleased with how this twelfth painting came out, but I am SO RELIEVED I don’t have to think up any more numbers of things. Yes, I know, I never had to since it was my own idea all along, but still, my internal logic is not to be disobeyed. I had decided on increasing numbers and that was how it would be… but boy did it get difficult as the numbers got higher. When I got to this final painting of the sheet and therefore the end of the numbers series, I had a very strong sense of giddy momentum, as in the last phase of a sprint.

I had long considered drawing some of my pens or paintbrushes, as they are close at hand and there is a deeply meta pleasure in drawing the things that draw (or painting the things that paint). But I held off, because I was concerned that their colors were too similar or their shapes too boring; there’s nothing very creative about drawing a handful of identical black pencils. Then, today, I was looking at my workspace and there was the roll of blue painter’s tape, and my kneaded eraser sitting out, and I had the proverbial lightbulb moment: who says I have to limit my subject to only long cylindrical objects? After that it was easy to put together an arrangement. I taped the pen/brush ends to a pad of tracing paper to hold things in place… and I also uncapped the tube of paint, and pressed gently until some of the pigment flowed out in a pleasing shape. 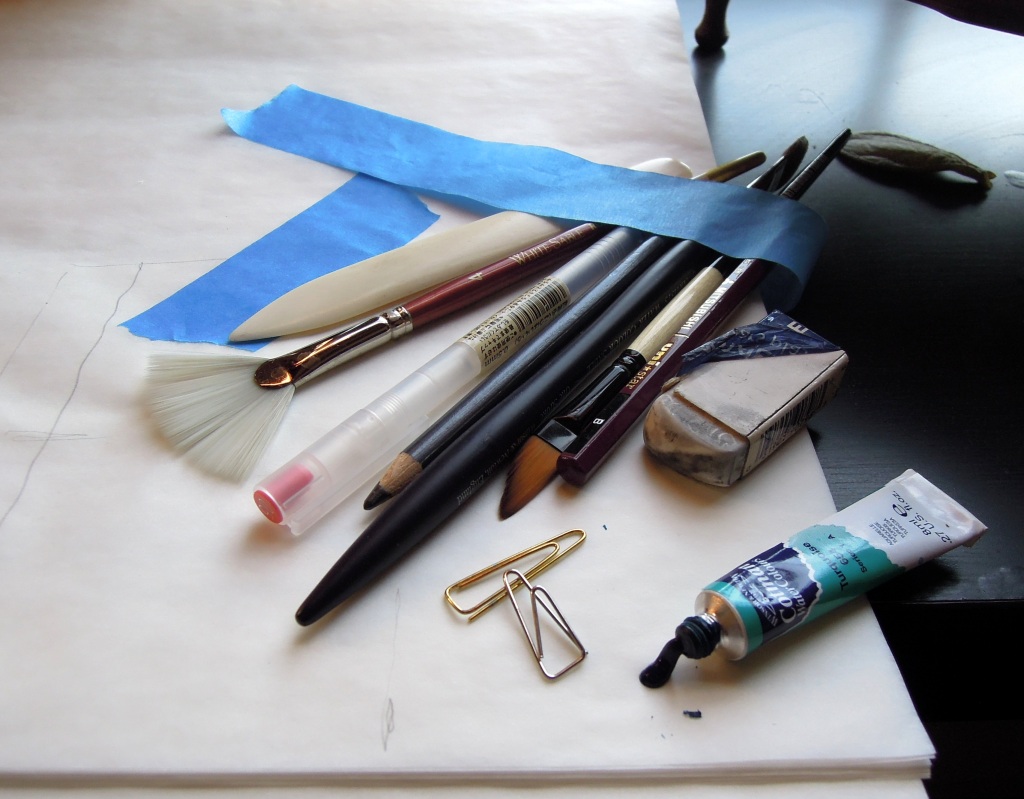 From upper left to lower right:

Yes, these are all tools I travel with. I’ve got more, too.

Obviously I did not need any of these tools to make this painting, or the preliminary sketch. 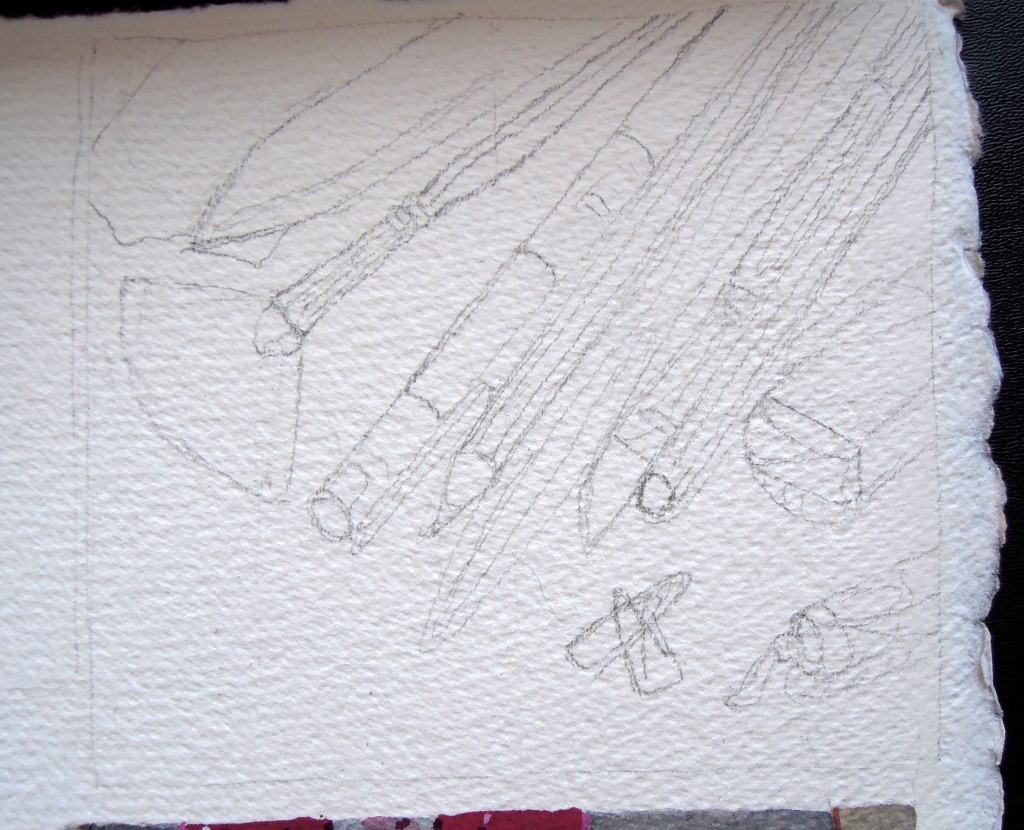 I probably should have used a ruler for the pen and pencils, but (a) I’m lazy, and (b) I think slightly uneven lines give more character. At least… (b) is my excuse for (a).

It’s not the easiest still life to paint, but after all my practice in the previous days, it seemed straightforward. I painted for over an hour, took a break to take a shower, and then came back and finished the last touches. It took me an hour and twenty-five minutes (excluding shower time). Some of the lines are indeed quite wiggly (that grey pencil looks crazed, though the paintbrush next to it really does have a shaped handle).

You can see where, on the blue painter’s tape in the upper left, I decided to extend the tape out past the penciled boundary I’d made earlier. (There’s a little inconsistency in the paint since I didn’t use the exact same amount of water when I made the addition; the only reason it’s not more glaring is that it’s gouache, not watercolor.) I think that little corner makes a big difference and I’m so glad I made that choice.

It’s also hilarious that every time I look at this painting, either in real life or on the computer, I keep thinking I left a piece of tape there by accident and I want to peel it away. I’ve outsmarted my own eyes!!

My favorite part of this painting is the eraser, because the outer layer of the label is peeling away and when I was setting the arrangement I almost flipped the eraser over to hide that part; I was afraid it would look weird when I painted it. But it looks quite like the real thing, and you can see just what’s going on with that label. I am ridiculously proud of this, and of this painting as a whole. As far as subject goes, I think I still like my sweaters best, but I am really, REALLY happy with Toolbox. It’s a good painting, and a fantastic one to finish this sheet and this phase of the daily painting project.

It amuses me to see how simple the first paintings are in comparison to the last few — that upper right corner is like a madhouse of intricacy.

The painter’s tape extending into the sprouts’ territory: 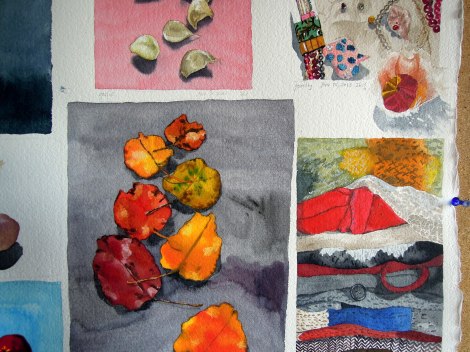 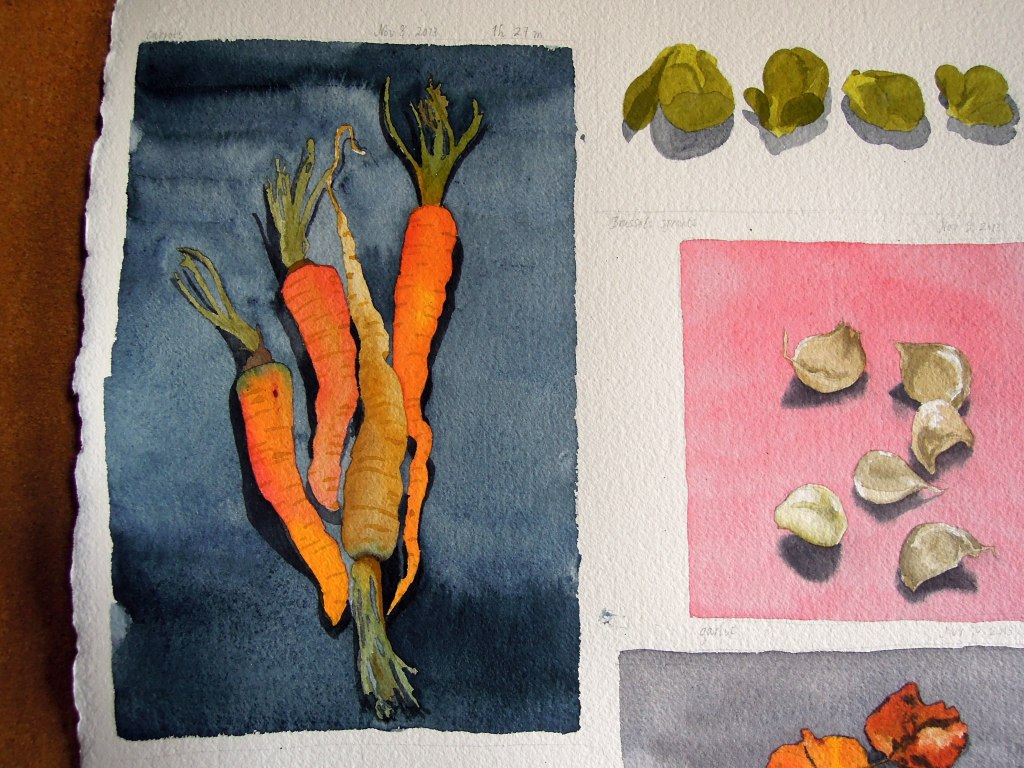 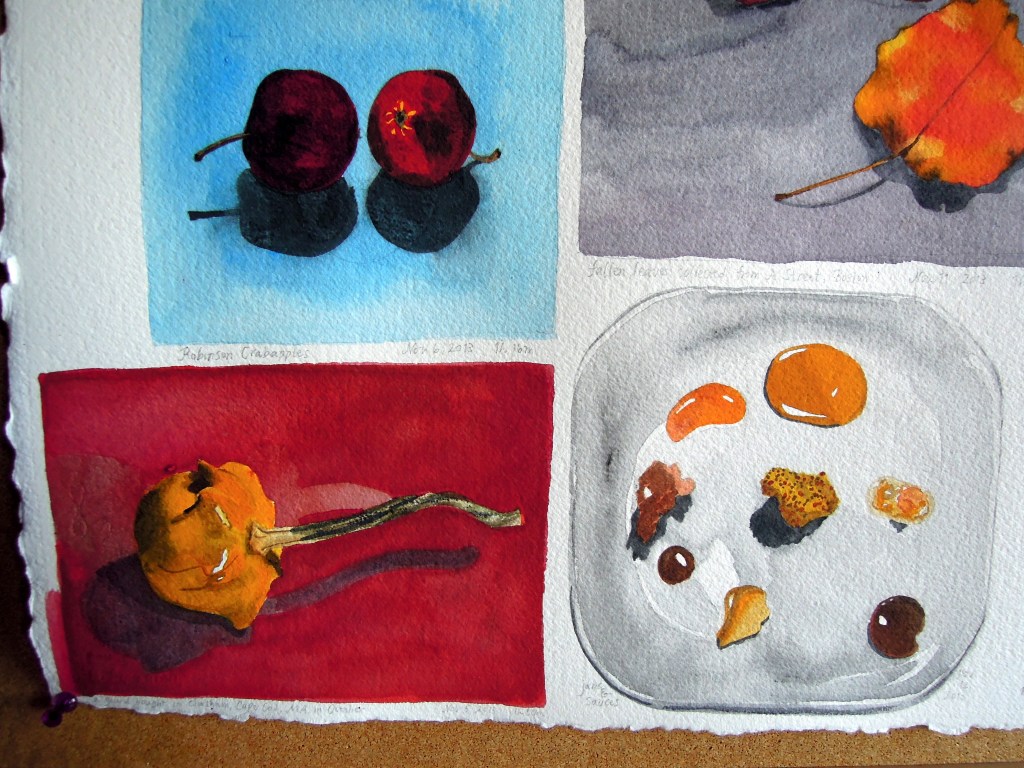 After I finished the painting I went to meet Stephanie Yue, whose adorable mouse artwork I enjoyed at the aptly named MICE comics show in September, and we ended up hanging out all afternoon and evening. When she saw my paintings she said, “That’s some good watercolor.” Those words from an artist would have made me feel amazing no matter what, but what’s even better is I know I wasn’t this good when I started this project — which is to say, only twelve days ago!!! Geez. On the one hand, yay. On the other hand, how much time have I been wasting before this? Not a pleasing thought.

The daily painting project is not over, and I do have a plan for the second sheet, but I’ll wait to reveal that. Suffice it to say that it will be nothing like this first phase, and yet in some ways it’ll be identical. Cryptic enough?

Music: For some reason I felt in need of a bit of dissonance with this session’s playlist. A surprising number of my choices also turned out to be great for dancing, which was fun since I had to do this painting standing (its high position on the paper meant I couldn’t reach it if I sat down). Thus Erik was treated to the sight of my backside as I leaned over the table, painting and shimmying. I doubt he minded… especially as I didn’t feel like wearing any real garments and so had fashioned a “skirt” out of a scarf. 😉

↩*My absolute favorites for all writing and general use. I first discovered Muji, a compact Japanese department store, in Hong Kong in 2010, and stocked up on their pens then. On our second HK trip in 2011 I bought more pens and refills, and continued replenishing my supply at other Muji shops in Paris, Singapore, and New York. I can’t remember now whether we visited one in Kyoto. There are locations now in San Francisco and San Jose, too, so I needn’t cross borders to restock my pen supply! At the moment I have at least a dozen colors in use and two refills in the wings. They write very smoothly in two different fine-point sizes, and the color selection is attractive and extensive, sometimes with pretty names if you can read the Japanese.

↩**These pencils confuse me, because they don’t seem to fit into the usual B/H classification system (9B is usually the softest pencil, 9H the hardest), but I like them. I have a whole bunch from some childhood moment when we bought a big box of them.

↩***This is not the more famous company Mitsubishi, but a company that’s known in the US for Uni-Ball roller pens. We unearthed this pencil at Erik’s parents’ house at some point while decluttering, and I appropriated it. It’s a nice one, and its color makes a good contrast in this composition.