My cousin Alex is responsible for our visit to Istanbul. Months ago — when we came home from Toronto for Gong-Gong’s funeral — we were walking with Alex, after the funeral dinner, and he mentioned that in October he would be going to Istanbul for a wedding. “We should meet up there,” he said, joking probably, and Erik and I looked at each other and said, “Why not?” Last week Alex arrived in Istanbul with a group of friends, and we spent a couple of enjoyable days together before the rest of the group took off to explore Ephesus and Cappadocia. It was very, very good to hang out with people again — and to follow along rather than decide everything for ourselves! Alex’s friends were sightseeing around Istanbul, so we joined them for a day in Sultanahmet, checking out Topkapı Palace and the atmospheric Basilica Cistern.

I don’t think I’d ever been to a palace before Topkapı (you say it like this, by the way). 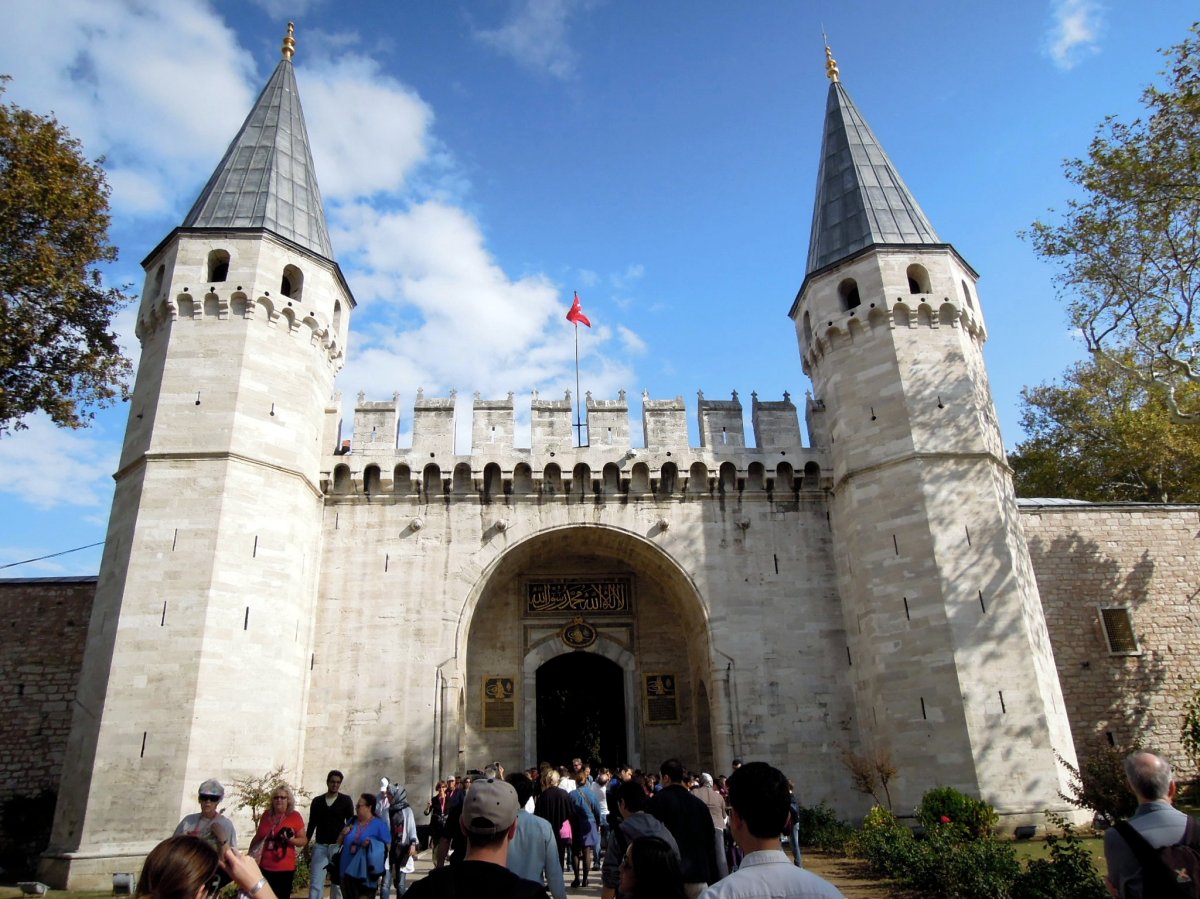 {as always, mouse over images for my notes, or click to enlarge}

Without really thinking about it, I’d always kind of assumed a palace was just a big house, but no — it’s not a place you can explore in one day, as you’ll see from aerial photos. It’s a complex rather than a single building, and the grounds are almost as good as a park. There was a treasury gallery glittering with gems (86-carat diamond, anyone?) and other priceless objects, collections of porcelain and armor, oh, and about a billion other things. It was enough to immobilize me just thinking about it. 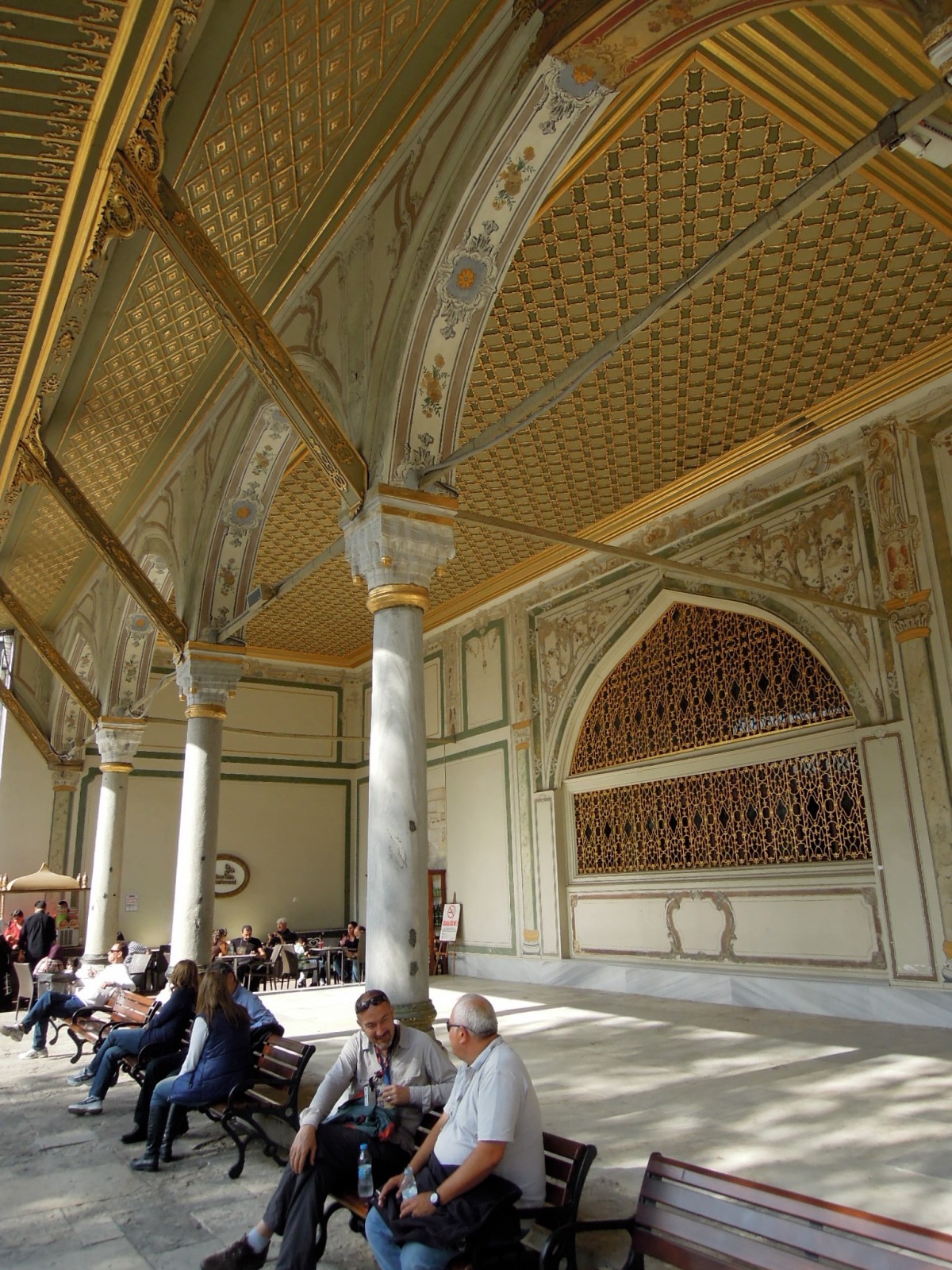 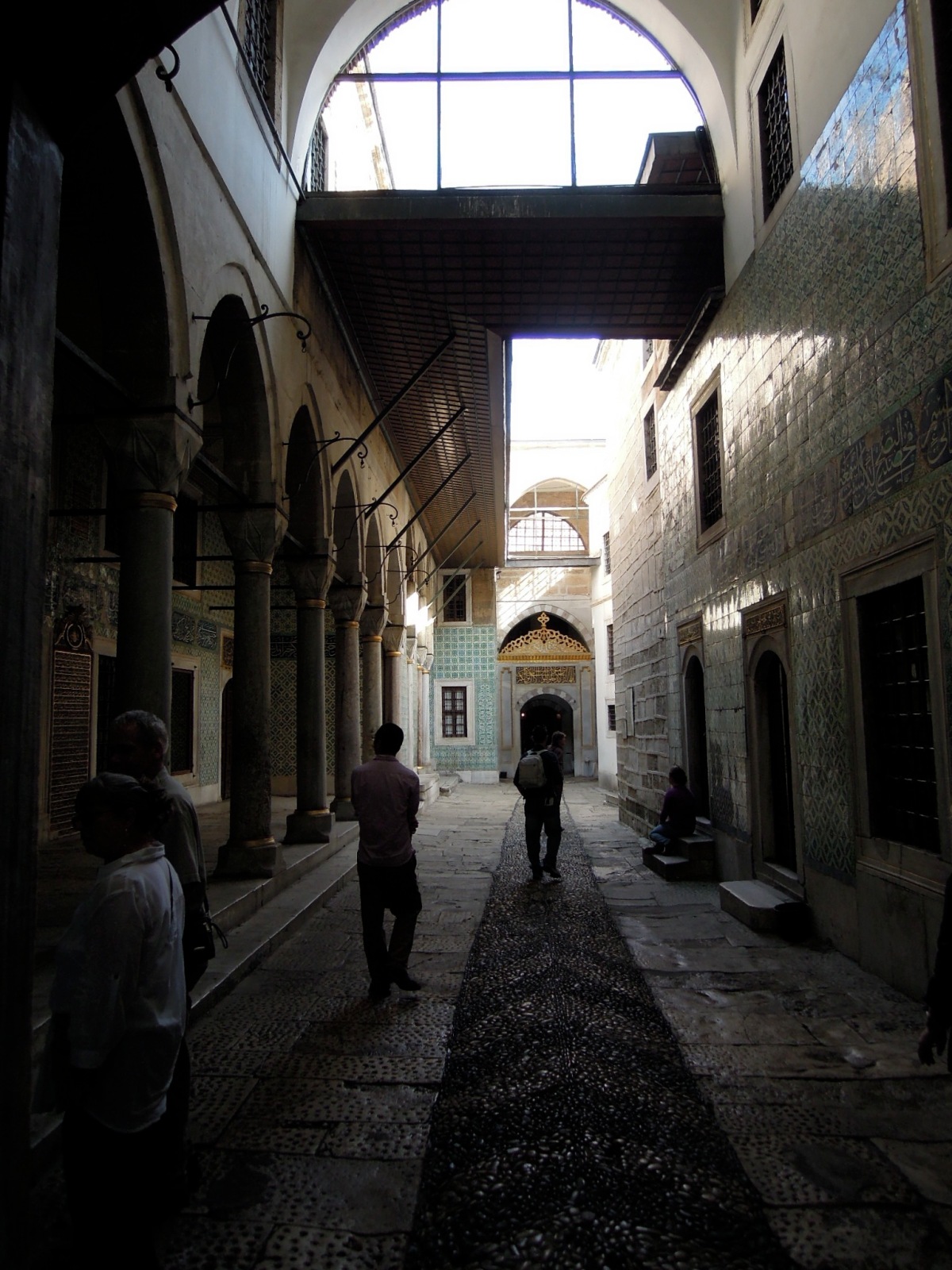 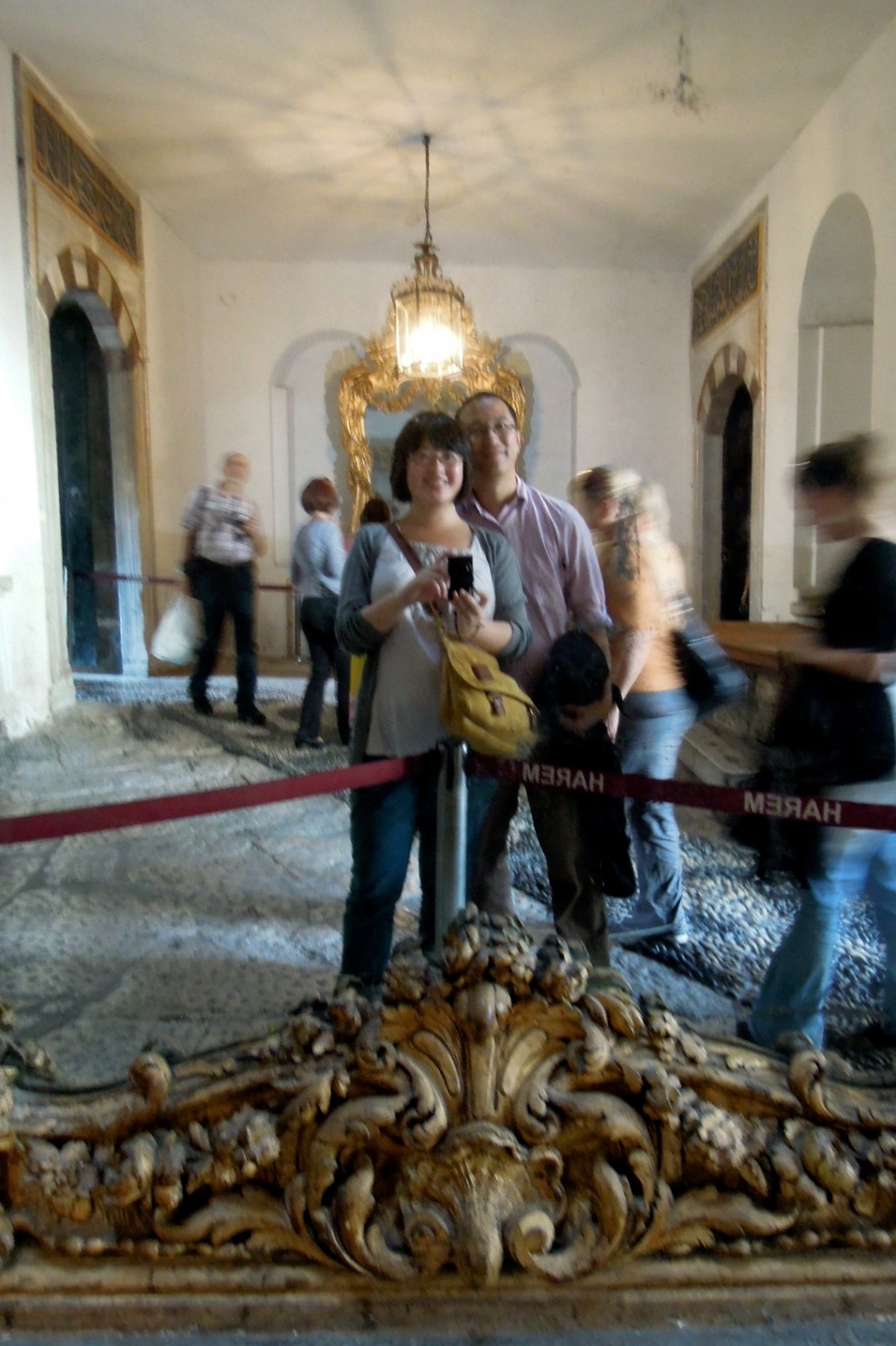 I found my eye always going to details: interesting patterns, broken and repaired tiles, door latches. I don’t think I really knew how else to take in the massive place. 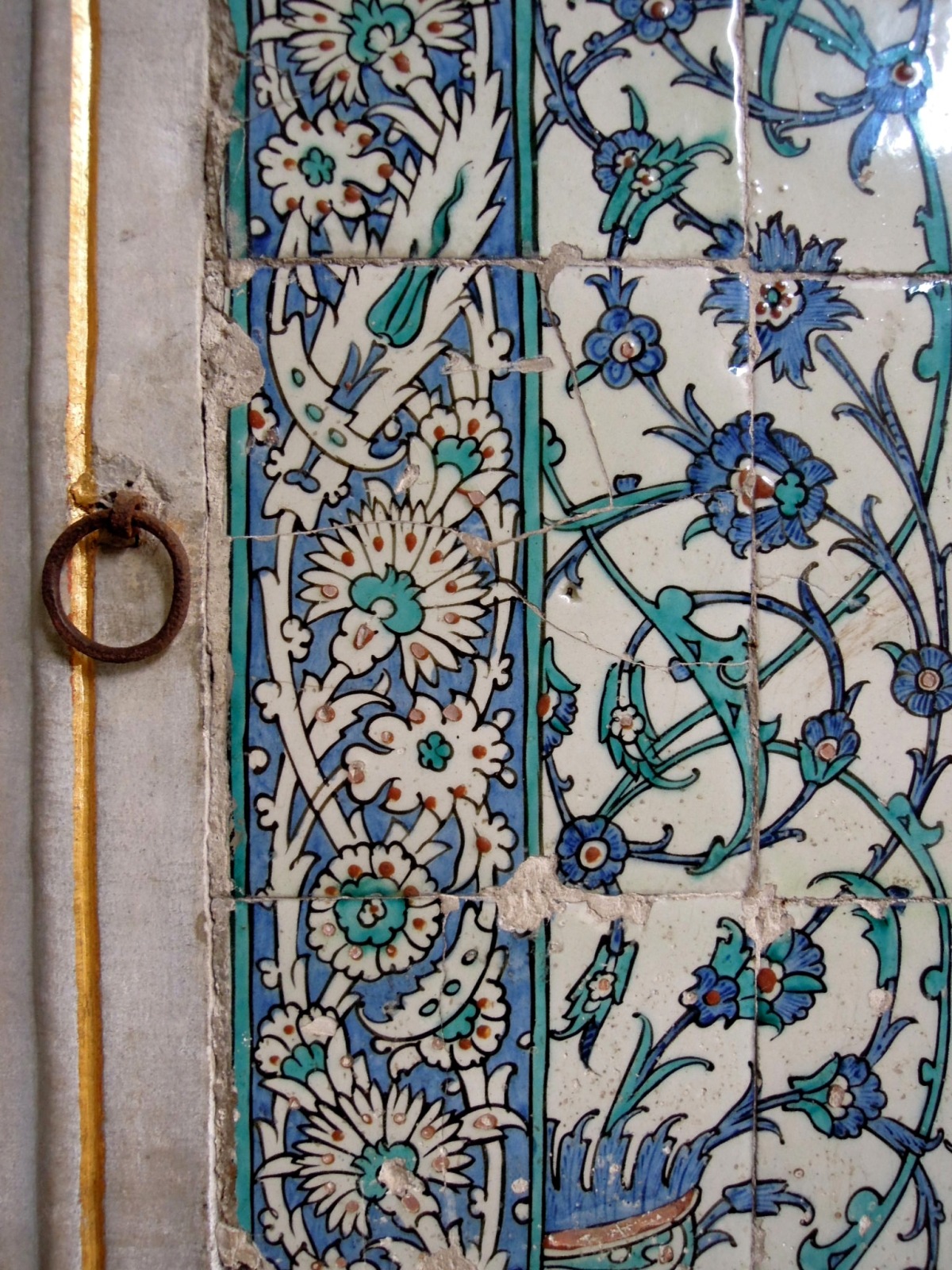 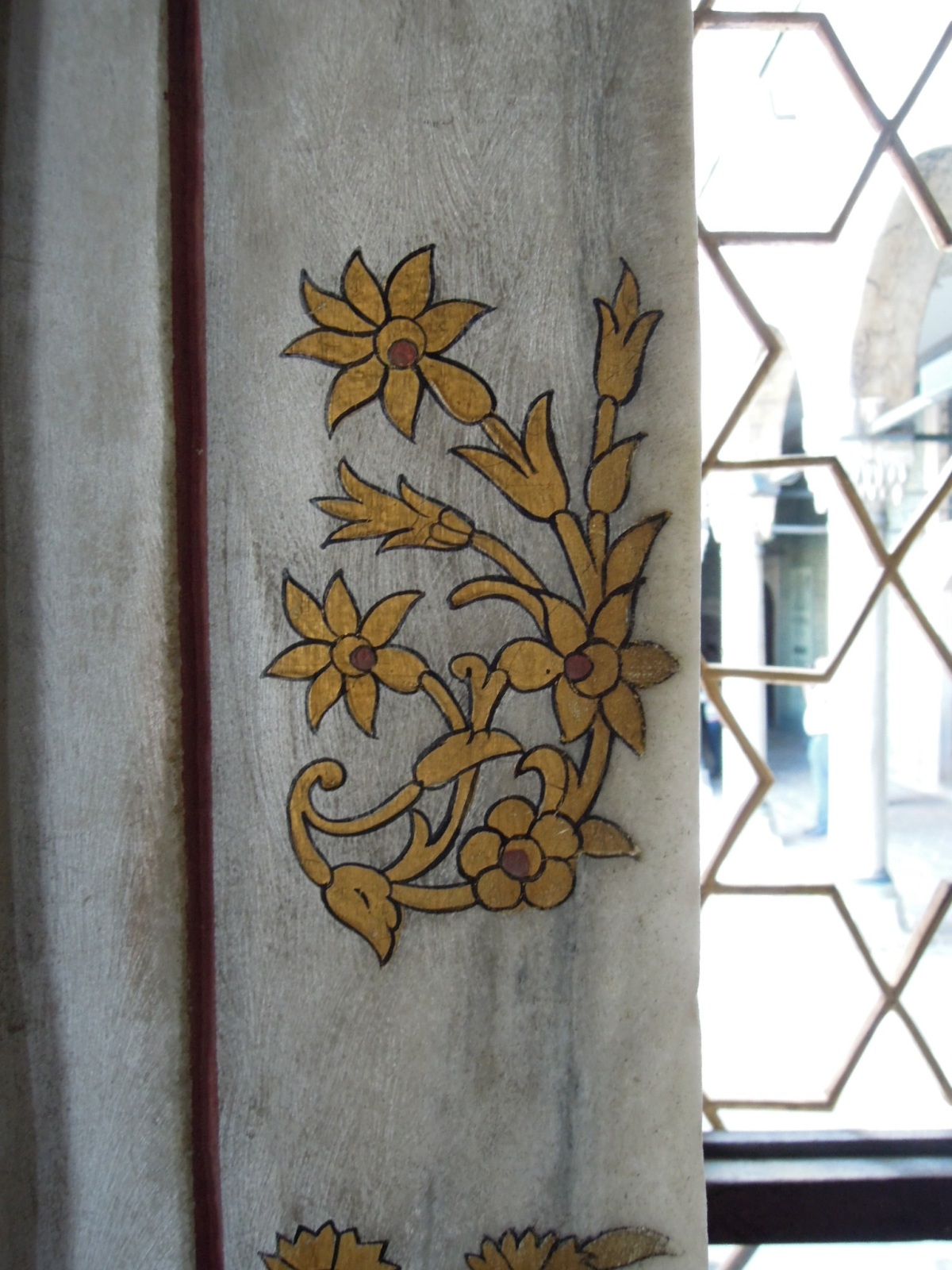 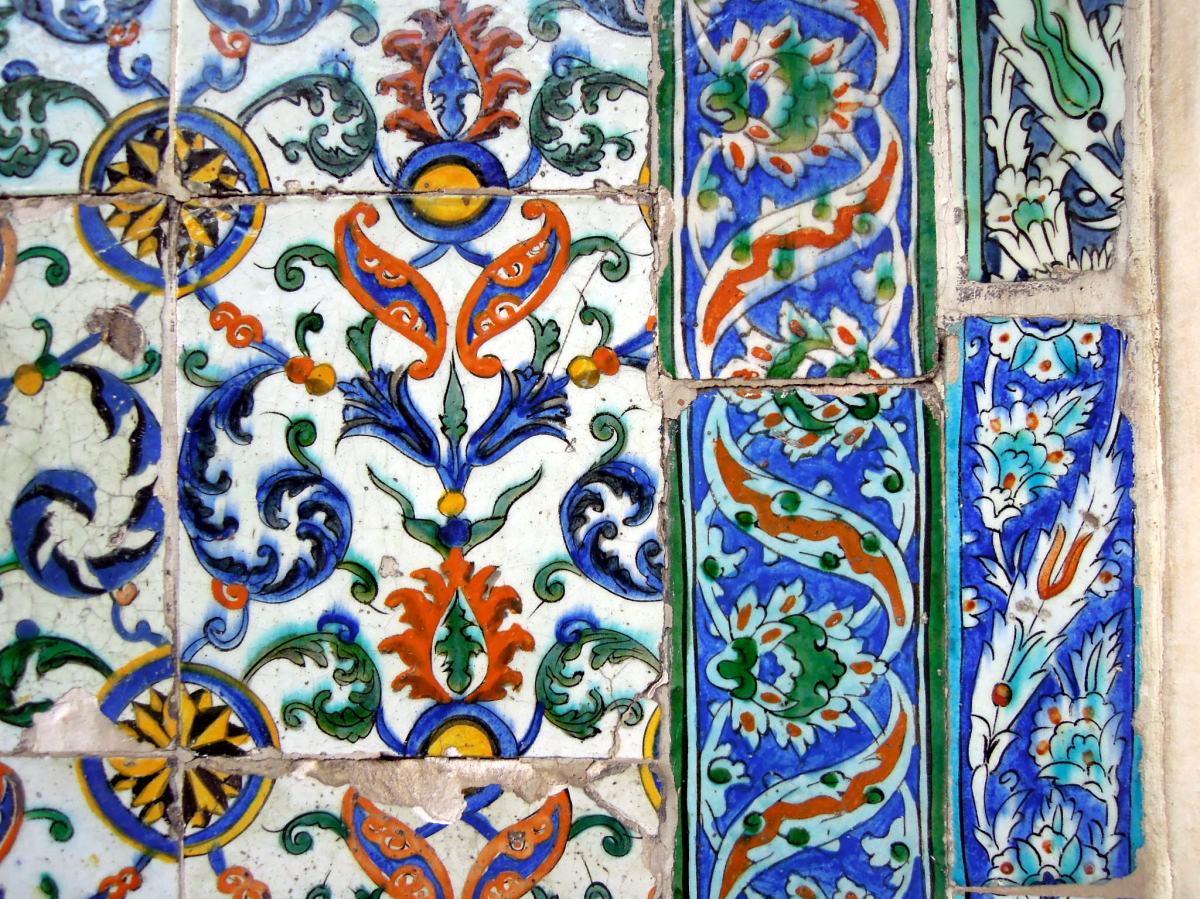 I had been wandering the harem for a while, brain-stunned and gaping at everything, when I came across a sign in the Courtyard of the Queen Mother. It said that members of the household stayed within their section of the harem, and would only meet one another in this courtyard. No further details, though I greatly wonder. Would these tiled walls really be all that you knew of the world — depending who “you” refers to? 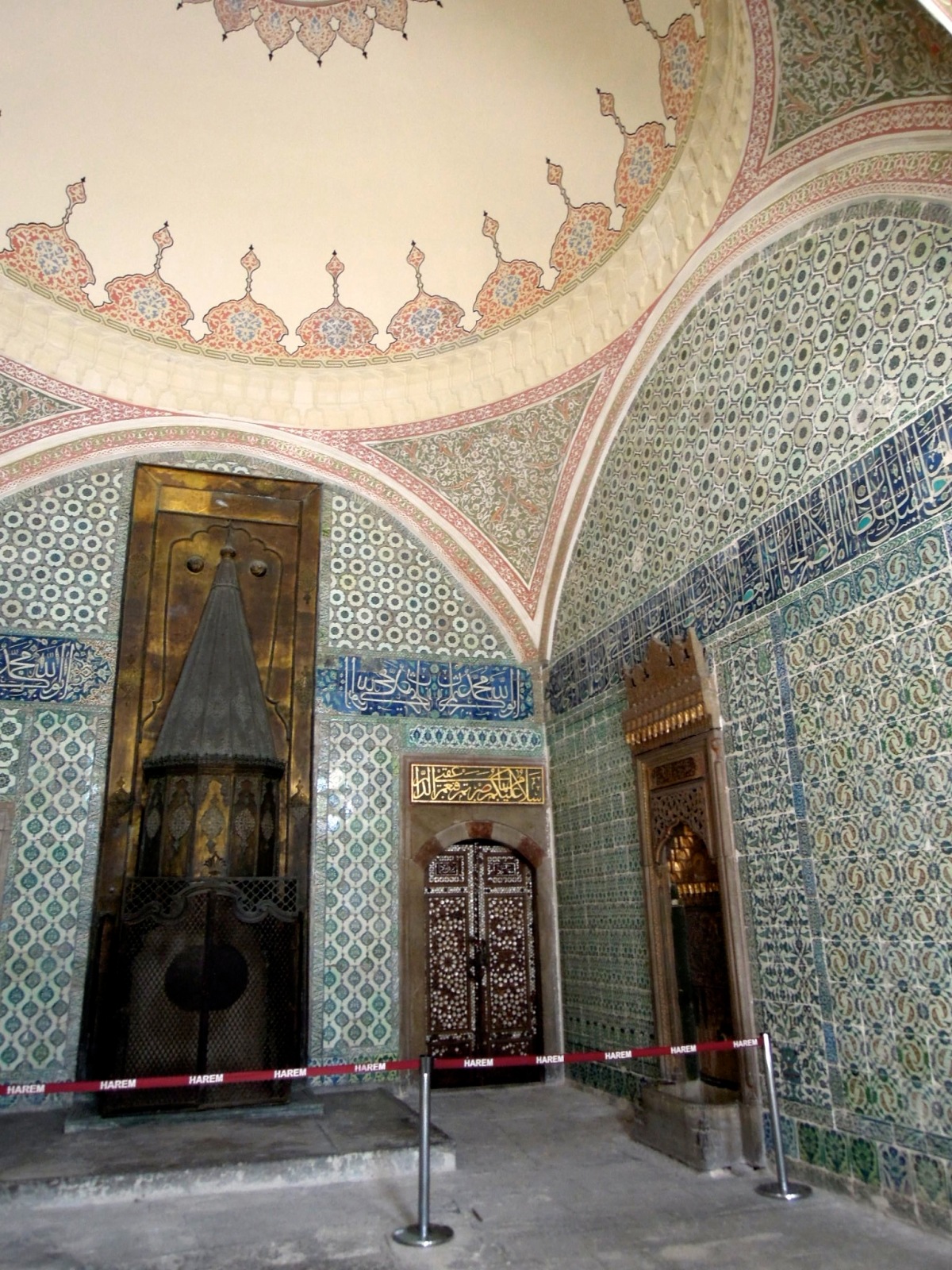 I sat in the courtyard for quite a while — almost two hours, I think — sketching, and trying to imagine what it would be like to live in this place (either as a servant or a member of the family). It is quite the exercise in imagination. 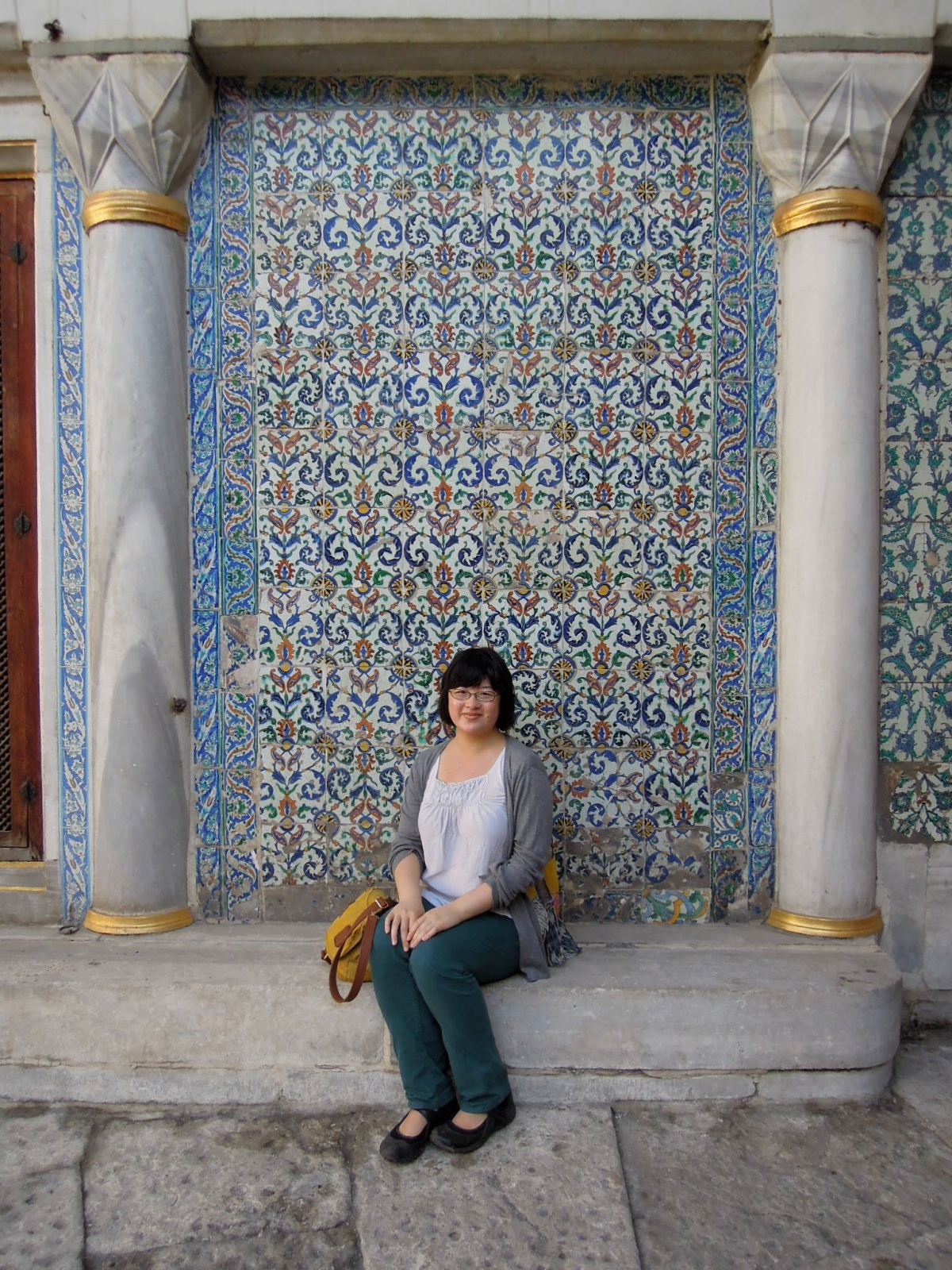 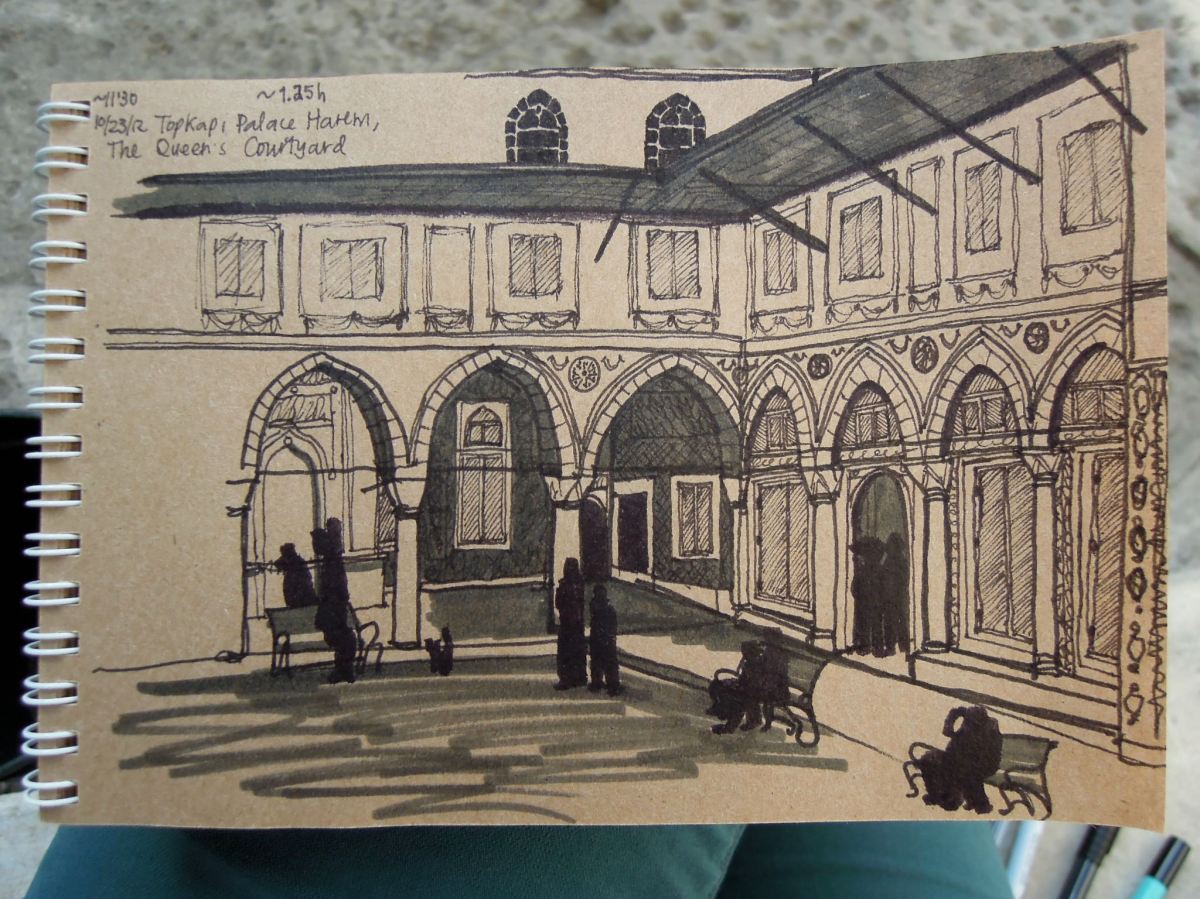 After this bit of quiet observation time, I felt even more dazed, but continued to make my way through the harem. The rooms got fancier. 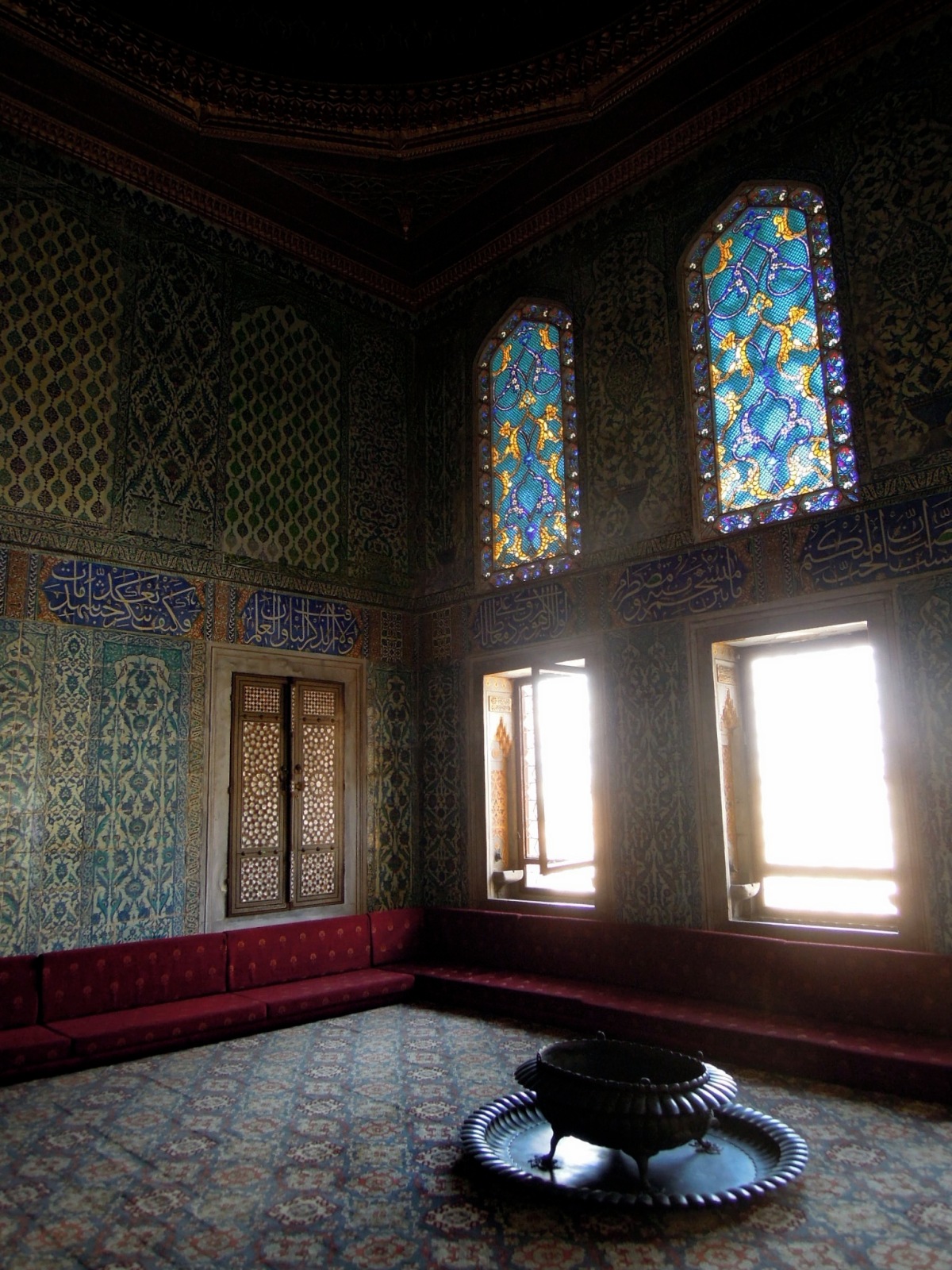 In the Courtyard of the Favorites, the last area to visit before exiting the harem, I found Erik and Alex talking about palaces. It was a lovely courtyard and if I hadn’t just spend a couple of hours in another one, I’d have wanted to sit. As it was, I just took a few pictures and a quick look around, and then we left together.

Eventually we caught up with the others, and we all went to have some food and drinks at an outdoor café next to the Arasta Bazaar. Outside the bazaar we saw turkeys, which made me ridiculously happy. Turkeys in Turkey. 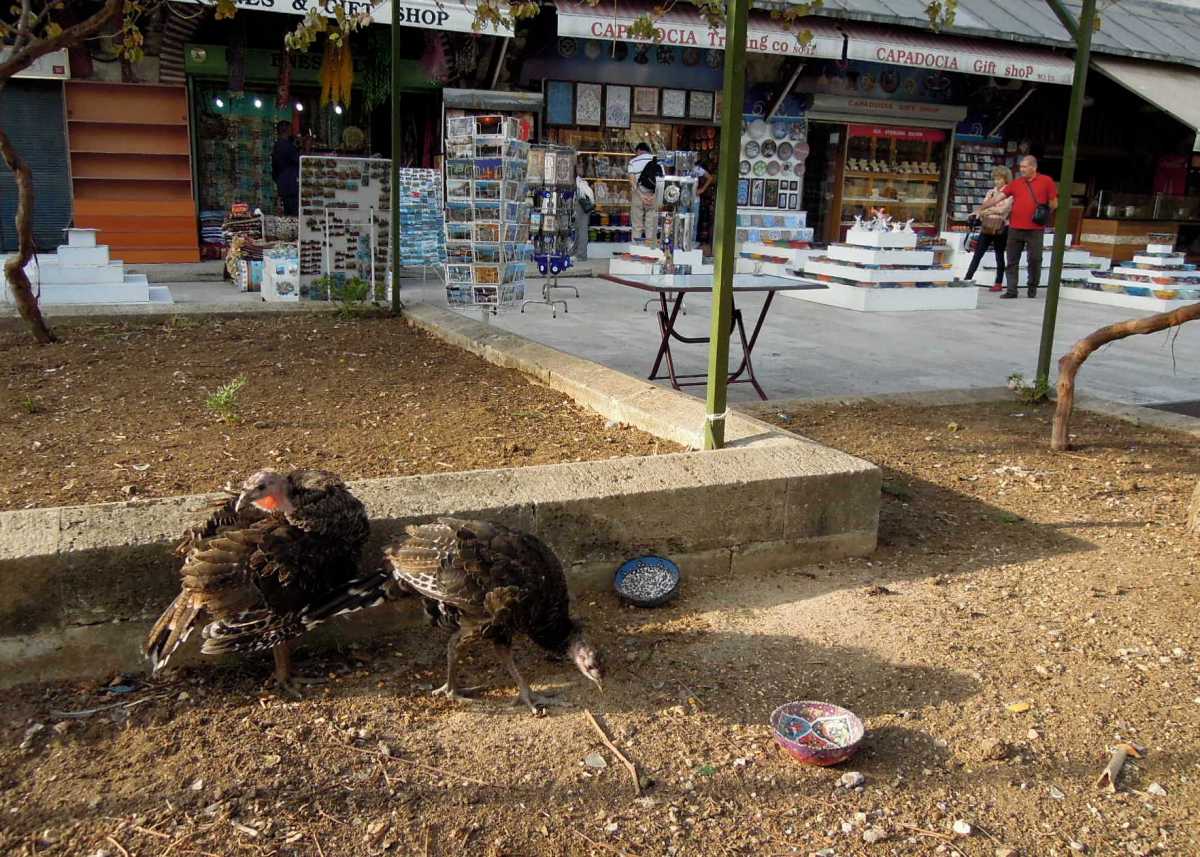 The next stop was the Basilica Cistern: an ancient underground structure that was basically a wet floor dotted with columns and navigated by a raised walkway. There wasn’t much to see, exactly, but it was a very curious place — and ambient music and spot lighting only heightened the strange effect.

Fortunately, it was impossible to get lost, since there was basically only one route around the place. Otherwise it would have been quite the creepy place, with water dripping from above, living carp in the shallows on the cistern floor, and little pieces of mystery all around.

I wonder if they ever do events in the cistern? It wouldn’t be a great space for a crowd, but maybe art installations or something? I must be thinking of Jupiter Artland. 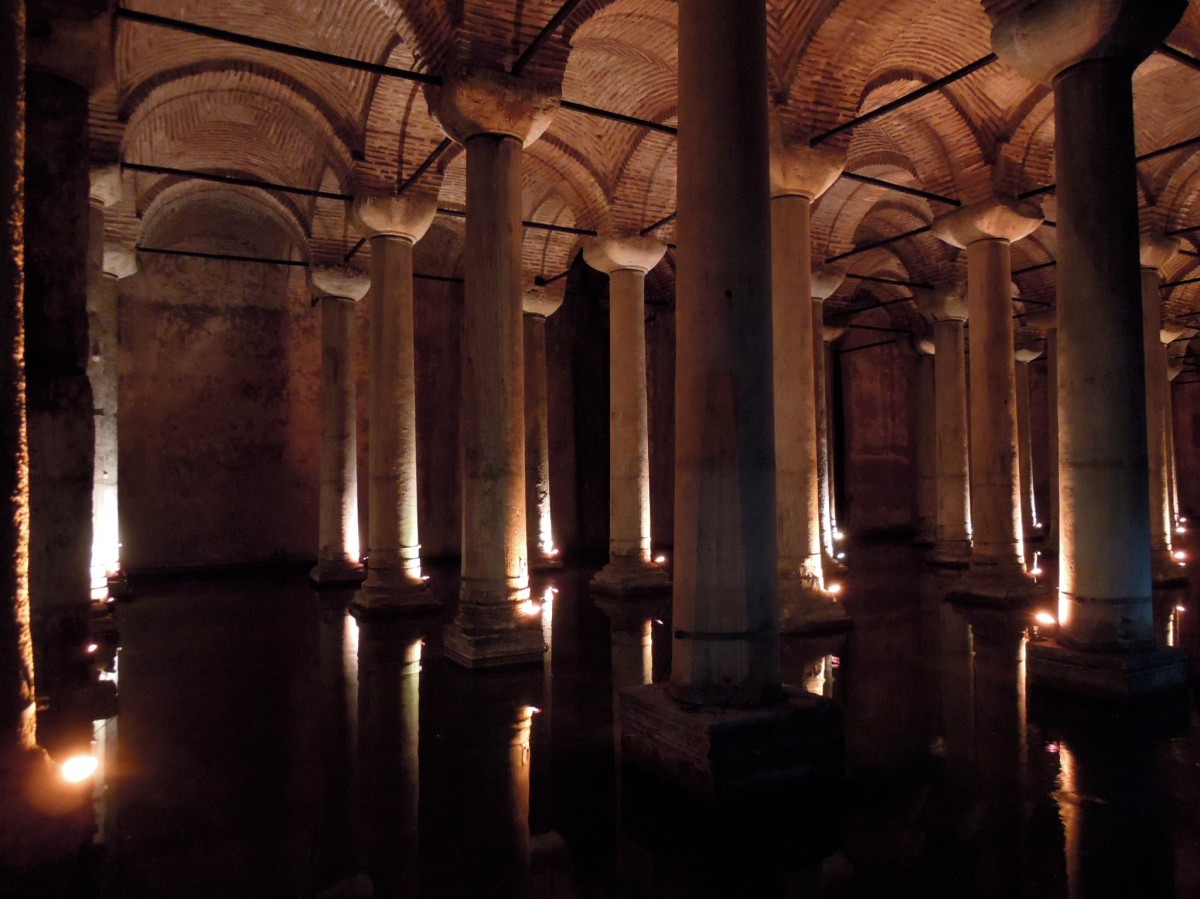 Bizarrely enough, it was here in the cisterns that we took our dress-up photos (like the one I showed you last week). Tucked into a corner near the entrance, about a half-dozen people were running an efficient operation, getting tourists in and out of historic costumes (they’re basically giant smocks with no closures), posing them on raised couches, and blinding them with camera flashes. The cameras were wirelessly connected to computers, and our photos were available before we’d even taken off the outfits. 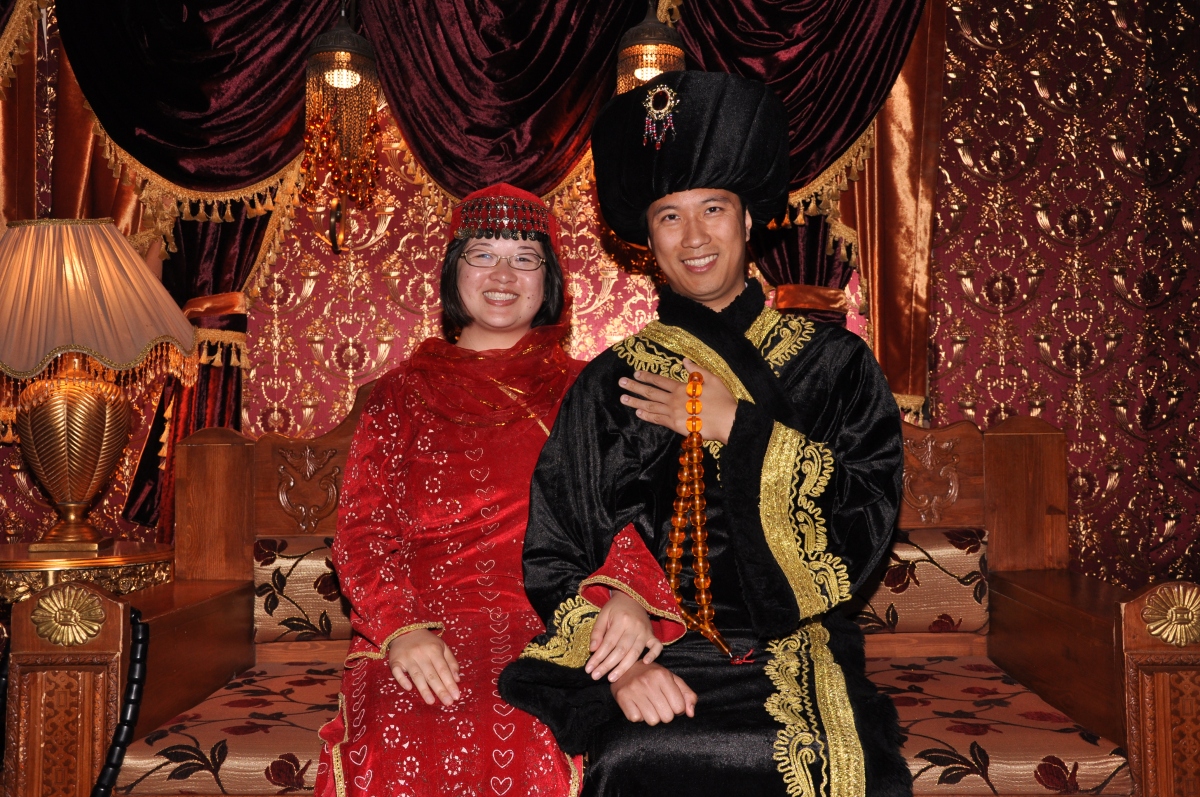 We took photos with Alex and his friends too, and they managed to bargain the photo guys down so that we got a CD with all our photos for less than buying a printout apiece.

We didn’t do too much, after the cistern, just hung out with everybody until Erik had to get back for a phone meeting. After so many months of mostly our own company, we were so grateful to be with friends and Alex. We won’t get another chance like that for a month, probably — the friend we were to meet in Paris now can’t make it — but we will after that: we’ve decided to go home to San Jose for Christmas, stopping in Boston first to see other friends. In some ways, home seems just as overwhelming as traveling, but goodness knows I need the rest. Six months of travel is taking its toll (I’ll write about this another time).