What would you do if you were heir to a fortune? Perhaps you’d live a life of expensive, jet-setting luxury. Maybe you’d dive into fashion, launch your own clothing line, and be photographed at the hottest events. Or you might buy a 17th-century manor house in the Scottish countryside, commission contemporary artists to create outdoor sculptures, establish an educational foundation, and open the 80-acre grounds to the public for a few days a week every summer. That’s what Robert and Nicky Wilson did, and they called it Jupiter Artland. It opened only a few years ago, in 2009.

{as always, mouse over for descriptions, or click to enlarge}

We visited the park last week, getting on the 27 bus (as advised on the Jupiter website) in spite of the driver’s protest “I’ve never heard of it!” It was about a 35-minute ride from the West End of Edinburgh, southwest into rural West Lothian. Fortunately Jupiter’s directions and my perusal of the map gave me some idea of where we should stop, and Jupiter had good eye-catching signage nearby, so we didn’t have any trouble finding it. The driver winked at us when he let us off — now he’ll know where it is for the next visitors!

From the bus stop we turned through the twinkling main gates and down the long, long driveway running through the woods on the grounds. It was a very peaceful walk punctuated by occasional passing cars (carrying other visitors to the park) and the sounds of the maintenance crew’s lawnmowers and leaf blowers. 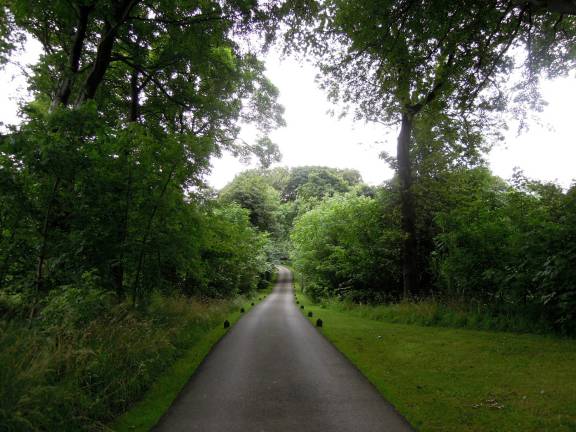 Trails led off to right and left, but not having a map, we ignored them. Soon we encountered what I’d come to see: the Life Mounds, a massive landscaped sculpture created by Charles Jencks (who did the other piece I so loved outside the National Gallery of Modern Art). 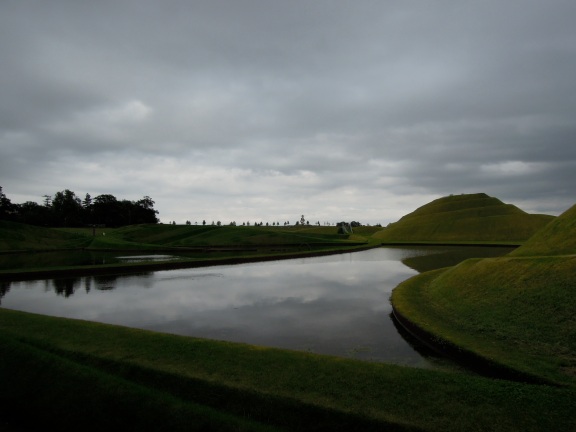 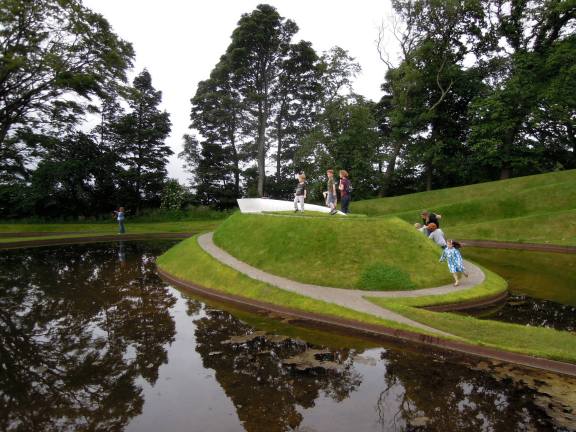 We later found out that the Life Mounds were technically closed — the recent rains caused two of the mounds’ sides to collapse, so they weren’t all safe for guests — but since there wasn’t signage indicating this, most people walked up them anyway. A very sweet young employee (or volunteer?) had to come out and tell us all, apologetically, that we had to come down. You can see one collapsed area at right of the photo below.

From the Life Mounds we continued down the path, passing a sheep pasture (with one ram and at least one alpaca joining the herd) and a few sculptures, including an arrow indicating the distance to Jupiter (“893 to 964 million kilometers,” accounting for elliptical orbits).

Finally we reached the visitor center, shop, and café, where we enjoyed a tasty lunch before paying our admission and receiving a map of the artworks. From there we entered the sculpture garden. I can’t show you all the pieces — there are about two dozen, and we didn’t even see them all — but the following are some of my favorites, in the order in which we viewed them.

Inspired by an old star map. [To me] evoking constellations, geometry, molecules, and a great fantastical beast. 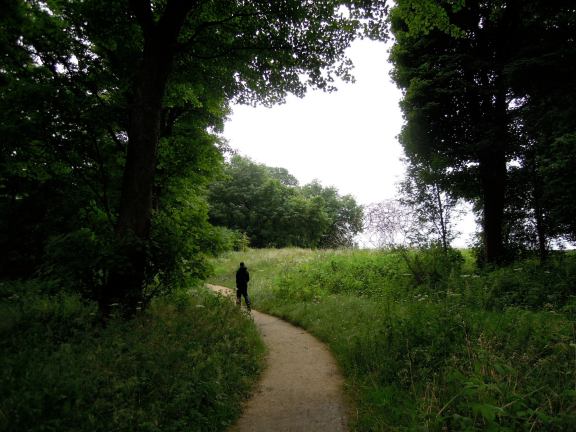 Northumbrian (UK) limestone in an elegant, minimal little arched footbridge. There’s more of his work further on in this post. 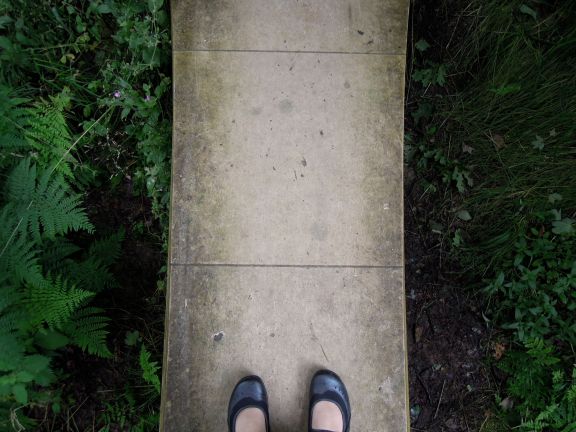 “Houses are usually places of security, shelter and comfort,” it says on the map. “There is something unnerving about entering a building in which nature is the occupant.” I found this very true. The house is sited so that from our path, we couldn’t see the doorway. I was admiring the arrangements of stones within the walls, thinking what a lovely little house this was, and then I glanced through the doorway and saw the floor was made of rough, uneven natural rock, not unlike what we climbed on Arthur’s Seat, with only faint light coming in through the door and windows. It was so weird and dark and discomfiting, I might not have stepped inside had Erik not gone first. 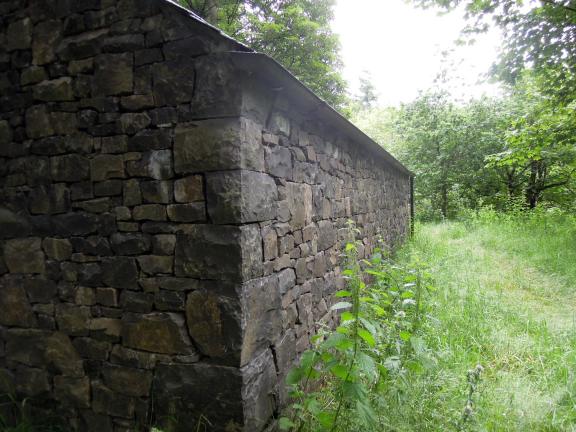 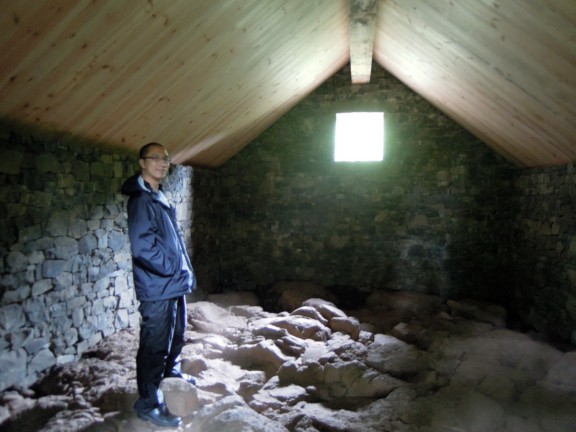 Hand-carved figures lurking among the trees. The artist’s description suggests the figures are inspired by a histrionic tantrum, but on our rainy afternoon I found them desperately sad, not to mention unsettling. I didn’t know how many there were nor where they would be, so when I turned my head and saw one of the “girls” leaning against a tree trunk — like a child turned to stone — my skin went shivery.

A classical round structure in stone, the ceiling only a little bit higher than my head. From a circular opening in the ceiling we could see the treetops.

A single rectangular plinth with the head of Sappho, the tenth muse. Before I read the description I read the title as x, the unknown: an unknown figure of undetermined position among a hierarchy of muses. 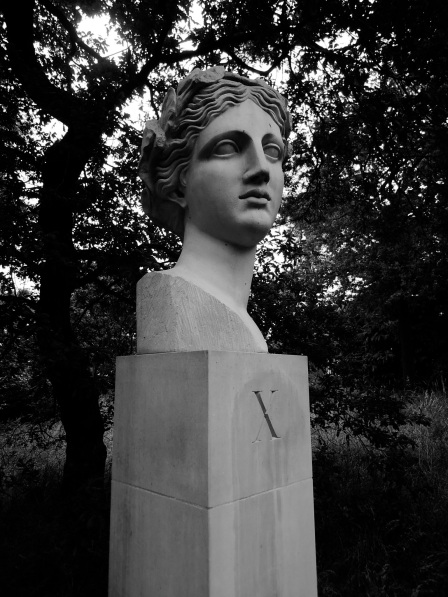 A stark concrete enclosure, of intimate dimensions, sheltering a wooden bench and a caringly tended (not real) graveyard. The headstones list dates and relationships (“loving son”) but no names. It called to mind an often-visited family plot. Having so recently been in other cemeteries — the very new one on the Colma (California) hillside where Gong-Gong was laid to rest in June, and Glasgow’s centuries-old and wonderful Necropolis — I felt quite connected to this little site, even if there was no one actually buried there. When I stand in this constructed graveyard recalling my grandpa and sending loving thoughts to his memory and to my living family, isn’t it as genuine a place of remembrance as if I were visiting a “real” gravesite? 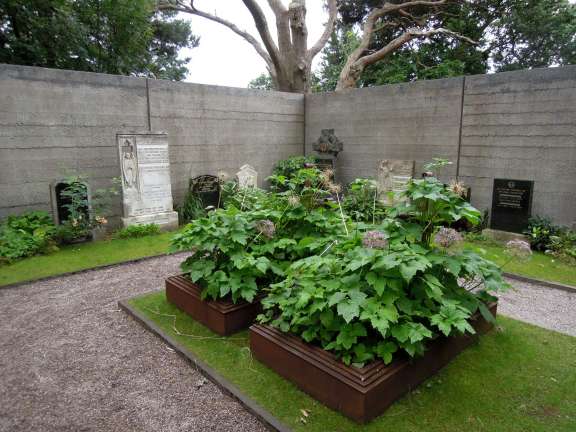 Like a real spiderweb, from most angles this network of fishing line disappeared into its environment. It was knitted using a technique inspired by Shetland lace. 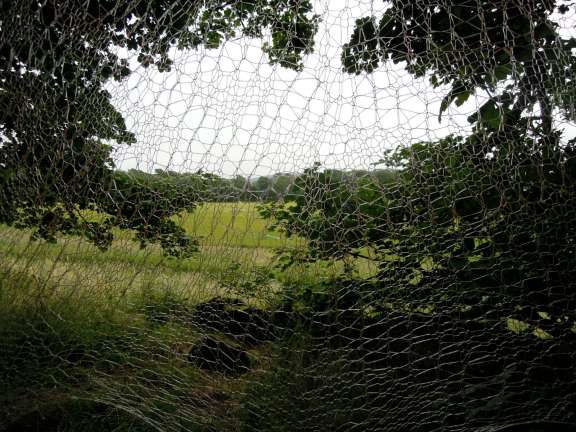 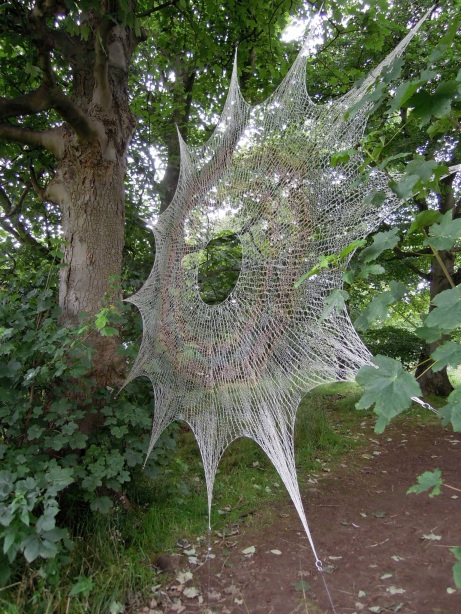 Anya Gallaccio, The Light Shines Out of Me, which opened so recently that it isn’t even listed on the website.

A small square chamber below the ground level, topped with obsidian, guarded by gold barbed wire, and lined with sparkling amethyst. Like being inside a jewel. I loved it. 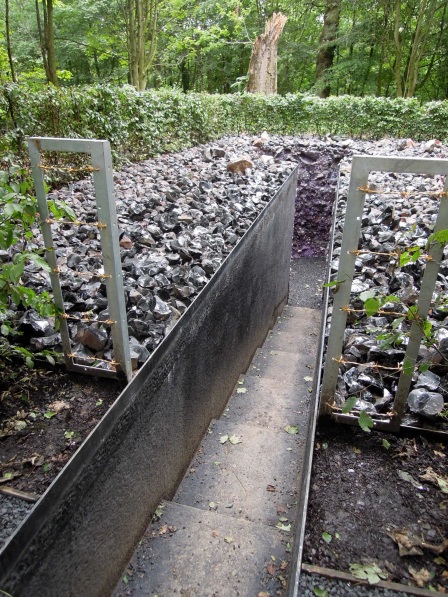 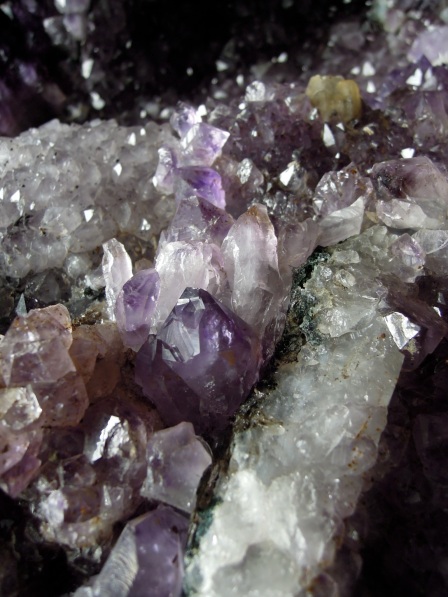 We spent maybe two hours at Jupiter Artland and could have stayed longer, but Erik had to get back for a meeting. If we lived in Edinburgh we’d become members and visit more often. The website says many of the pieces are intended to change with the passage of time and the growth of the trees and foliage. It would be amazing to be able to watch that happen — and the grounds are just a pleasure to wander, too. 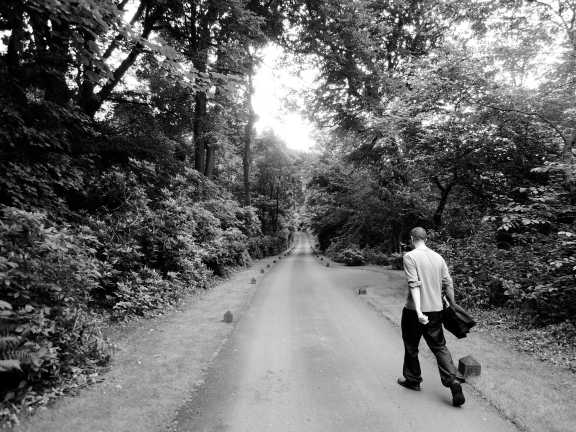 The park reminded me of other favorite indoor/outdoor art spaces: the Getty Center in LA, Evergreen Brick Works in Toronto. As much as I like museums, I’d always rather see things in an environment that isn’t so hushed-voices-and-dustless-glass-boxes. I loved Jupiter because it has an atmosphere to it, because it encourages curiosity and meandering exploration, and because it is every bit as human-created as it is “wild” (I don’t think a settled landscape and centuries-old grounds can really be called natural, even if they’re wooded) — a welcoming combination of expansive and safe, grown-up and childlike, old and new and living.