There is so much I want to write about in detail, but alas, as is so often the case, I have no time. So, super-quick recaps of the past couple of weeks are in order.

San Diego
Last-last weekend, I drove down to San Diego to spend the weekend with Jennifer. I had such a lovely time there I ended up staying from Saturday till Tues morning, and I would have stayed longer if I could. Suffice it to say that the visit was tremendously restorative for me. It helped me figure out a lot of things about what I’ve been missing during this past year, and of course it was truly wonderful to see Jennifer again. Sophie, too, and Esther. Jennifer and I had a couple of very good dinners, baked a batch of The Brownies, five pies, and a quiche, and talked enough to remind me how much I’ve missed being able to talk to Jennifer about everything that goes on in our lives. I actually got some work done, too.

I also bought an awesome cloak. I do seem to attract interesting outerwear. Funny thing is it appears to be this one [link broken], so I didn’t get such a great price on it, but that’s all right. It still makes me very happy and I can’t wait till I get a chance to wear it… though goodness only knows when that will be. And yes, of course I will wear clothes under it, yeesh.[the broken link was to a “sexy” costume shop]

Engagement Party
Went home this past weekend because Mommy and Daddo were having an engagement party for Erik and me. Not our idea, but nice of them to do it. It was a good party and it was nice to see everyone together. I especially enjoyed having our whole family, Jackie, and Erik all together again. It’s been a long time since that happened.

It made me realize afresh, though, how very much I do want our wedding-shindig (whatever it ends up being, since we don’t want a formal wedding) to be just as we want it, without caving in to expectations or traditions we don’t hold by. It feels very odd to me to have to behave formally when none of us is used to it, and try to adhere to protocol when I normally don’t. What’s the point of it, anyway? So… yes. No fancy wedding for us.

I love my family, though. 🙂

Fire
I went out Tuesday afternoon for my weekly meeting with my mini-cohort, and on the way back home in the evening I got stuck in traffic. When I approached Hollywood I smelled smoke and noticed helicopters flying in the direction of my apartment, so I hunted out a news radio station and heard that there was a brush fire in the Hollywood Hills, but that it was under control. I had no idea how close it was to my apartment, but when I finally got off the freeway I found that Hollywood Blvd was blocked and I couldn’t get home the usual way. After a detour, I luckily found parking two blocks away. I got back into the apartment as quickly as I could, threw down everything and grabbed a camera, went outside, and starting taking pictures. 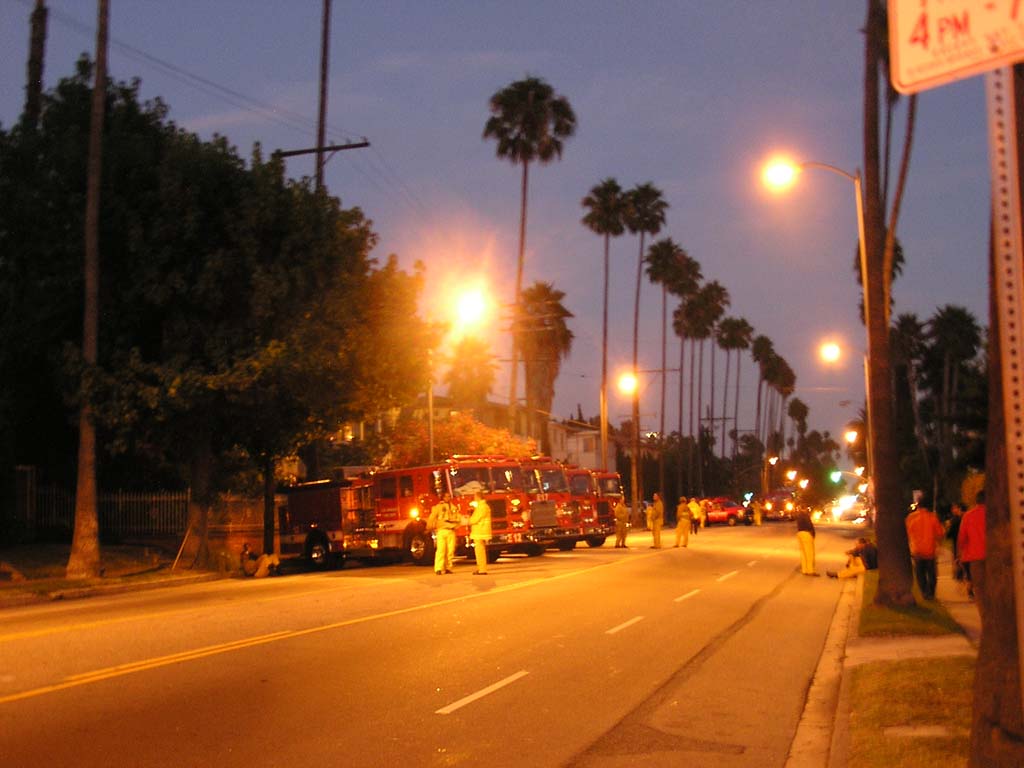 It seems that the worst of the blaze had gone on while I’d been out in Granada Hills discussing the nineteenth century, as you can tell by the very active flames in the video on this page.[link broken] By the time I got back and started out with my camera, everything was more or less fine and it was just rather exciting and fun. The street was blocked off all night and well into the morning, which, oddly enough, left the neighborhood much quieter and more peaceful than usual.

Mood
I’ve been rather despondent and cranky all summer about all the studying I have to do, and how pointless much of academic work seems to be, yada yada. But I’ve been feeling a little better of late. My time at Jennifer’s, and in the roomy homes and apartments of my cohort, have led me to realize that it’s important to be able to physically get away from my work whenever I need to. Also, I’ve realized I need to take long breaks in which I do something entirely different for perhaps even several hours at a time, just so I don’t feel constantly on the spot to be doing work. Since I got back from San Jose, I’ve been leaving my apartment daily (particularly in the middle of the afternoon, when it’s most difficult to concentrate) and taking good long breaks. I don’t know if I’m getting more work done than before, but I’m certainly less resentful of the work’s demands, so that’s a step in the right direction. I think my massive nesting shopping has also helped, since my apartment now feels much more comfortable than before–or maybe it’s just the end of the heat wave? At any rate, things are looking up.

[image link broken, but it was a postcard reading “Oh my god! I think I’m becoming the man I wanted to marry!”]

A problem for strong women everywhere!

I was on West Third St yesterday, in a cute shopping district that Asal introduced me to last week, and I discovered a bookstore devoted entirely to cookbooks and food-related books. I’d be freaking out, except that they don’t seem to have a good section of used books, so I have yet to understand why I’d want to go there (I can get cookbooks anywhere, can’t I?). But I did find this postcard and was so amused I had to get it.

**edit**
Okay, so that wasn’t all. There’s some new preview footage of the upcoming Harry Potter and the Goblet of Fire movie and it looks INCREDIBLE. OMG. ‘Scuse me while I go flip out for a while. Aaaaaaa!!!!