I signed up for the class because I was about to travel abroad, for the first time, by myself. That wasn’t the only reason, but it’s what got me in the door for real after years of telling myself I would take such a class. Women’s self-defense, six Monday evenings in June and July, course fees on a sliding scale. I had never taken such a course and thought it would be useful. I figured we would learn how to hit people — probably men — who might be bigger or stronger than us, and maybe we’d talk about unsafe situations and pepper spray and whether it’s really a good idea to walk home at night with your keys fanned out between your knuckles.

We did talk about all of that, and then some. There were about fifteen of us, college-aged to grey-haired and everywhere along the spectrum of female-identifying, and we had two instructors, both experienced martial artists who radiated competence and compassion in very different ways. We talked about home safety and unwelcome physical contact and chokeholds and weapons, and we practiced punching and kicking and rolling and yelling. We did partner exercises, mostly with each other and once with strangers (martial arts students). We practiced using the hard parts of our bodies — elbows, feet, knees, heels of hands — against the imagined soft parts of others’ — eyes, throats, ears, groins — with force and intention. It was all, as I had hoped, useful knowledge. But, to my surprise, there was more.

all photos by Emily Winston

escaping from an attacker who has me pinned 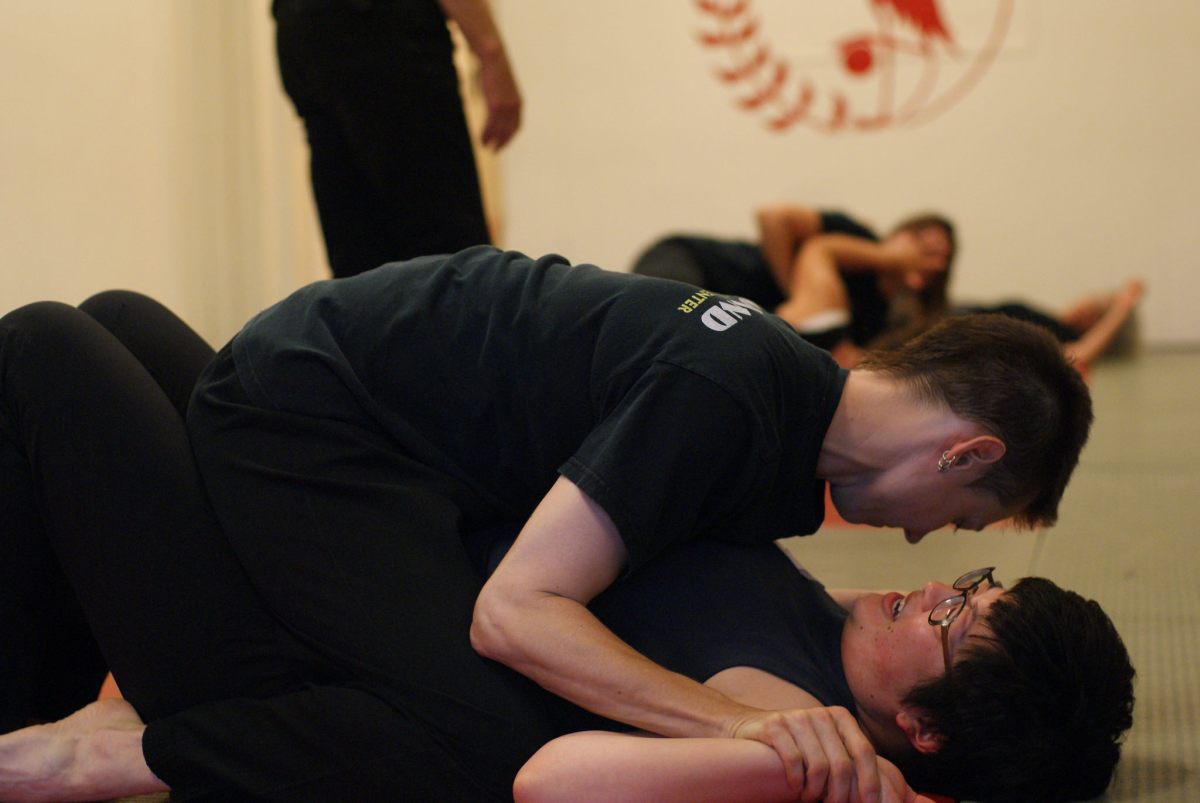 I had thought, before taking the course, that self-defense was about technique. I had assumed it was about knowing how to hit someone in the right way to cause damage. It is, yes, but that’s only secondary. What comes first happens within ourselves: we have to know, for ourselves, what is and isn’t okay. We have to believe that we deserve to feel okay, that we have the right to communicate our wishes when something feels off. And we have to be willing to do that, even if at the expense of others, even if it makes us look rude or pushy or overly sensitive. Self-defense, it turns out, is about communication, and communication is something everyone can do, no matter how small or frail or young (babies are great at it!).

I was startled, while taking the course, to realize I needed practice in this kind of communication. It is an unhappy fact that being female in this world — especially a woman of color, or queer, or disabled, or many other qualities — means we learn to stifle our basic desires, at least when among others. We are taught that we must step aside, that our role is to make others comfortable, that courtesy means accommodation and “keeping the peace.” We learn to pause before we speak or act, to second-guess ourselves, and we learn it over and over until it becomes almost instinctive — until we forget that once upon a time, we had other instincts. We learn to minimize ourselves so that others may take up more space. And in so doing, we absorb that we are less, that we deserve less, and that we should therefore ask for less and expect less.

I think a lot of us have spent our lives hearing that we are too sensitive, that we should discount our own reactions and defer instead to others. I found it tremendously and unexpectedly healing to be in a space where we were never minimized in any way. During one particularly emotional meeting, we talked about violence as a continuum from life-threatening to irritating, encompassing everything from gang rape to everyday microaggressions. This is something I think I’ve known for a long time, that in spite of the difference in degree and immediacy, all of these actions have the same goal: to reduce our power and autonomy. While it’s true that a thoughtless remark may be less dangerous than a forceful blow to the head, it’s much harder to defend ourselves from the latter when we’ve already become used to downplaying the harm presented by the former. In other words, we don’t only practice self-defense when we take a swing at an attacker, but when we acknowledge that yes, it’s okay to feel annoyed, to feel angry, to not be happy even when other people tell us we’re fine.

During the six weeks of the course I was continuously startled to recognize lessons from class surfacing in my everyday life. As I mentioned in another post, I realize now that I’ve lived a lot of my life expecting things to happen to me, rather than happening as the result of my actions or my choices. It’s a strange realization, because I actually feel that I, more than a lot of people, have self-determination in my life. And yet I’ve still felt, in some fundamental way, powerless, and I know that in my case that’s as much about being female as it is about being a child of immigrants, and therefore always feeling, in some way, wrong. But while living in society will always necessitate some compromise, what’s important is that we recognize what we’re compromising on — that the pressure to conform and to accommodate, however strong, stops at the boundaries of our own thoughts.

fending off a group attack

I think about all of this a lot, these days, as I prepare to be a parent for the first time — to a child who, we’ve learned, will be a girl.* I am so glad to have started this journey (however unintentionally!) with self-defense class, with learning to recognize my own boundaries and communicate them to others. I imagine I will call on these lessons very often as I navigate the world of parenting. And they’ll be a good foundation for my daughter, too, as I teach her to trust herself and be strong in her convictions and intentional in her actions. In the meantime, though, she’s already a solid communicator; she kicks me all the time! After she leaves my body she will continue to convey her needs loudly and determinedly, and I’ll just have to keep my sense of humor and remind myself that infant-level clarity of communication is something we could all use more of, and maybe I should be considering her my next teacher!

*Technically, you could (and maybe should) say not that she’s a girl, but that her visible external genitalia do not include a penis. Because that’s what we know, but gender is more than that. That’s a bit much to explain casually, so we just say she’s a girl, but here is another instance in which compromise can stop at the borders of my mind — we at least know, even if we’re not saying so to everyone, that her gender identity is not ours to proclaim.

It’s worth mentioning that this post went through several drafts, and I ended up leaving out a lot: thoughts about my own inherent worth vis à vis other people, about the divide between private and public, about race and power and social justice, about my privilege and how I’ve unconsciously relied on it to protect me. But there’s a potential essay in any of these topics, and I didn’t want to try to cram all those essays into this one post!