Earlier this summer, I launched my pregnancy by embarking on a monthlong trip abroad. I hadn’t planned it that way, of course (who would?)! Unsurprisingly, first-trimester travel was a bit anxious-making — I had no idea how my symptoms would manifest and was terrified of puking my way through trans-Atlantic plane rides (thankfully this did NOT happen!) — and I was often very uncomfortable, but looking back, I’m glad the timing worked out this way. While travel probably made me physically unhappier than I would have been at home, the change of scene served as both physical and emotional distraction, giving me something to think about besides the massive life changes ahead!

For our first stop, we flew to London and then traveled by train to Dorset, in the southwest of England. Our lovely friend Cathy was getting married in her coastal home town of Swanage and we wanted to be there to help celebrate. Swanage is a popular holiday destination and late July is their regatta time, but we succeeded in booking a weeklong AirBnB in the guest wing of a family home. Our hosts were so sweet and their home welcoming — for which I was so grateful as I was constantly jet-lagged, exhausted, and nauseated! I had to spend most of my time at “home” but we still managed one small outing each day. Swanage is on the so-called isle of Purbeck (really a peninsula), a stunning region known as the Jurassic Coast because of its rich geological history. I’d really like to go back someday (when hiking and eating of copious fish-and-chips sound more appealing!) and explore it further.

Kimmeridge is both a bay and a village, and it’s only seven miles from Swanage, making it the ideal day trip for our tired selves. The country roads were narrow, but that was fine as we never met another car on them!

When we got to the ocean (assisted by a helpful sign bearing the words THE SEA and a right-pointing arrow!) there was a strong breeze, perfect for the surfers who were out enjoying it. 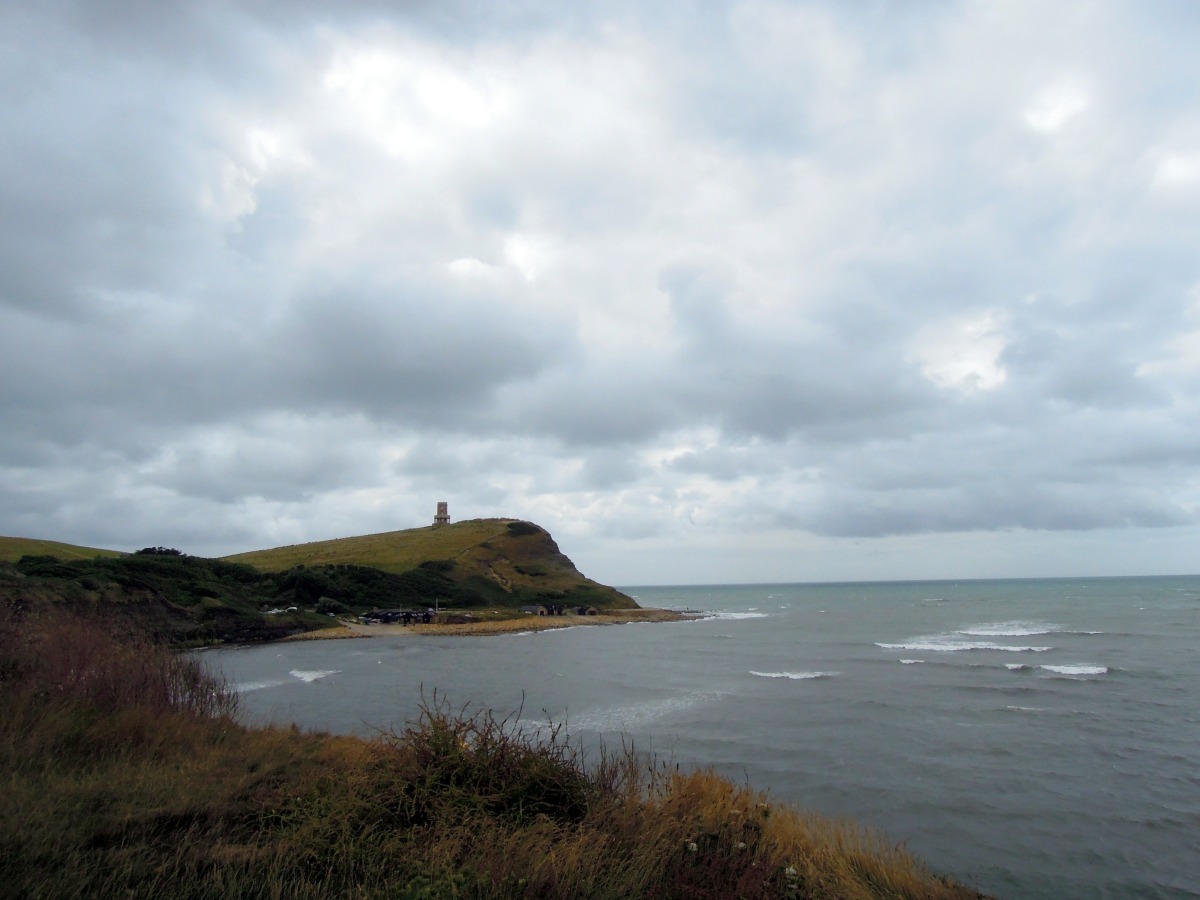 After examining some of the rocks along the shore,

we took a short but steep uphill trail and enjoyed the views from higher up.

I wasn’t feeling very well, but it made me happy to take deep breaths and imagine this incredible fresh air making its way into our fetus — a little early subtle travel for this tiny being!

Then we had a good lunch at a café and retired for the rest of the day.

The Pig on the Beach, Studland

The day after Cathy and Michael’s wedding, they made time to meet us (in fact, to treat us) for dinner at the elegant Pig restaurant and inn. The building is an old manor house and is just as adorable inside as out, and it sits (along with its extensive kitchen gardens) right on the beach, looking across the bay to Bournemouth.

It was too dark in the restaurant for any of my food photos to come out well, but have a look at the sample menu and you can imagine how delicious it was!

After dinner we asked the wait staff to take a picture of us. It’s a little fuzzy but our expressions show just how I feel about that evening.

One of the closest villages to Swanage is Corfe Castle, site of ancient settlements and an imposing castle on a hill. We could have driven there, but we opted instead to take the steam train — because steam train!! Even the station at Swanage had a vintage feel. 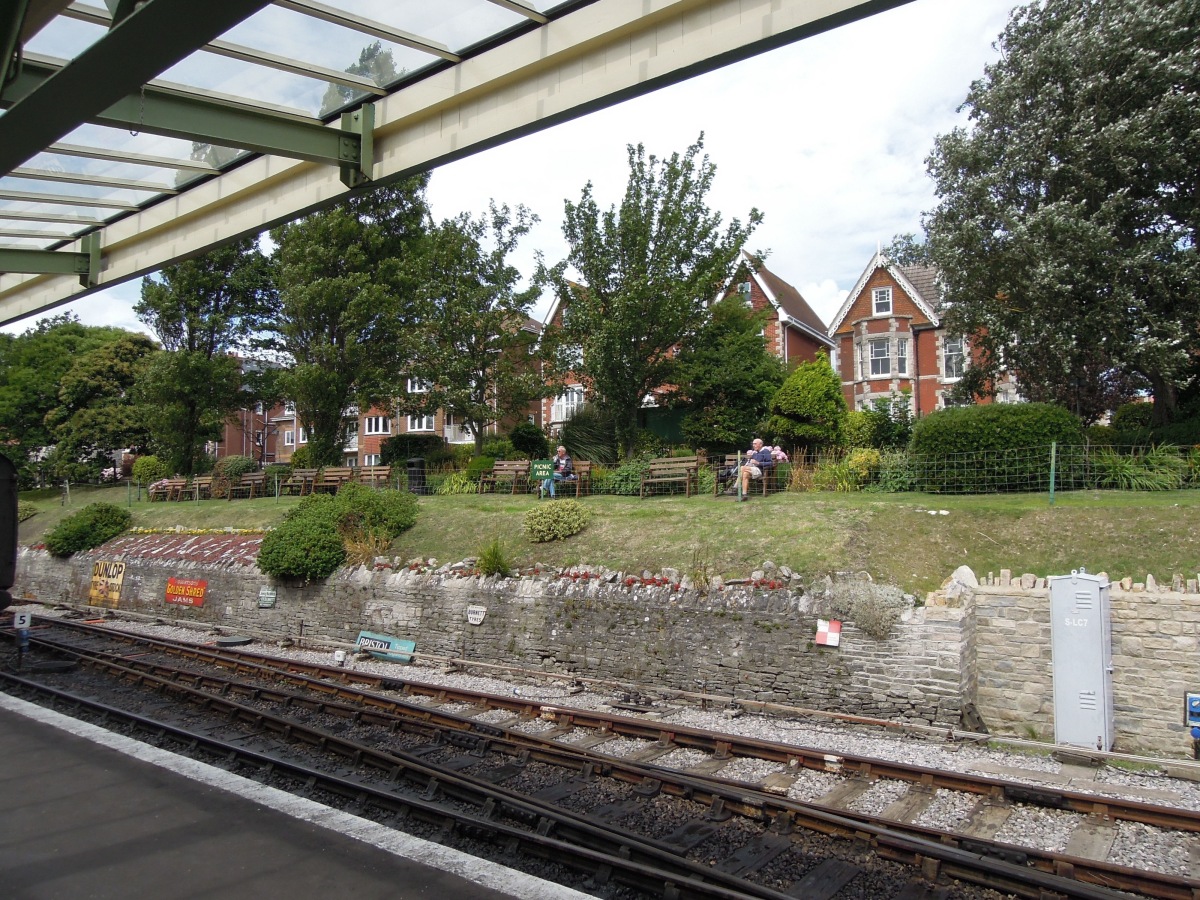 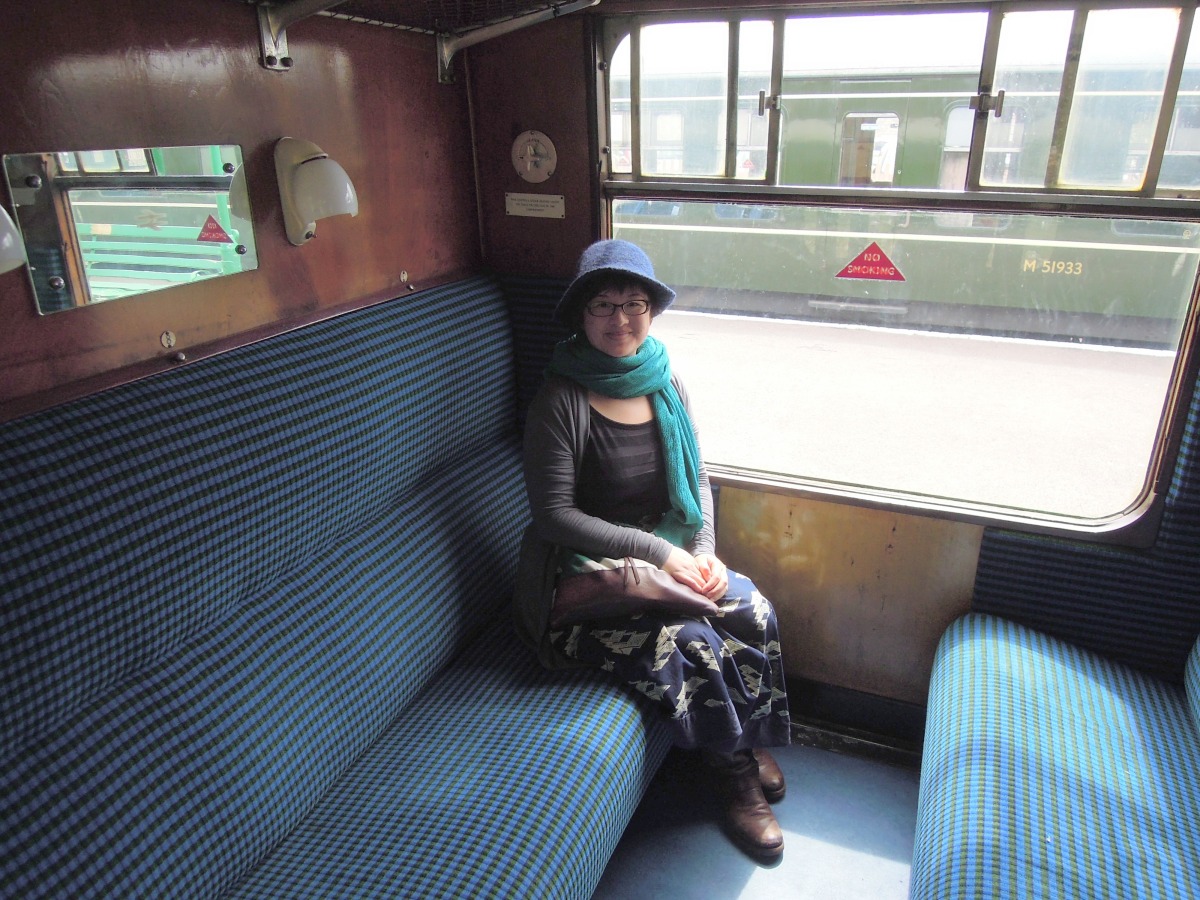 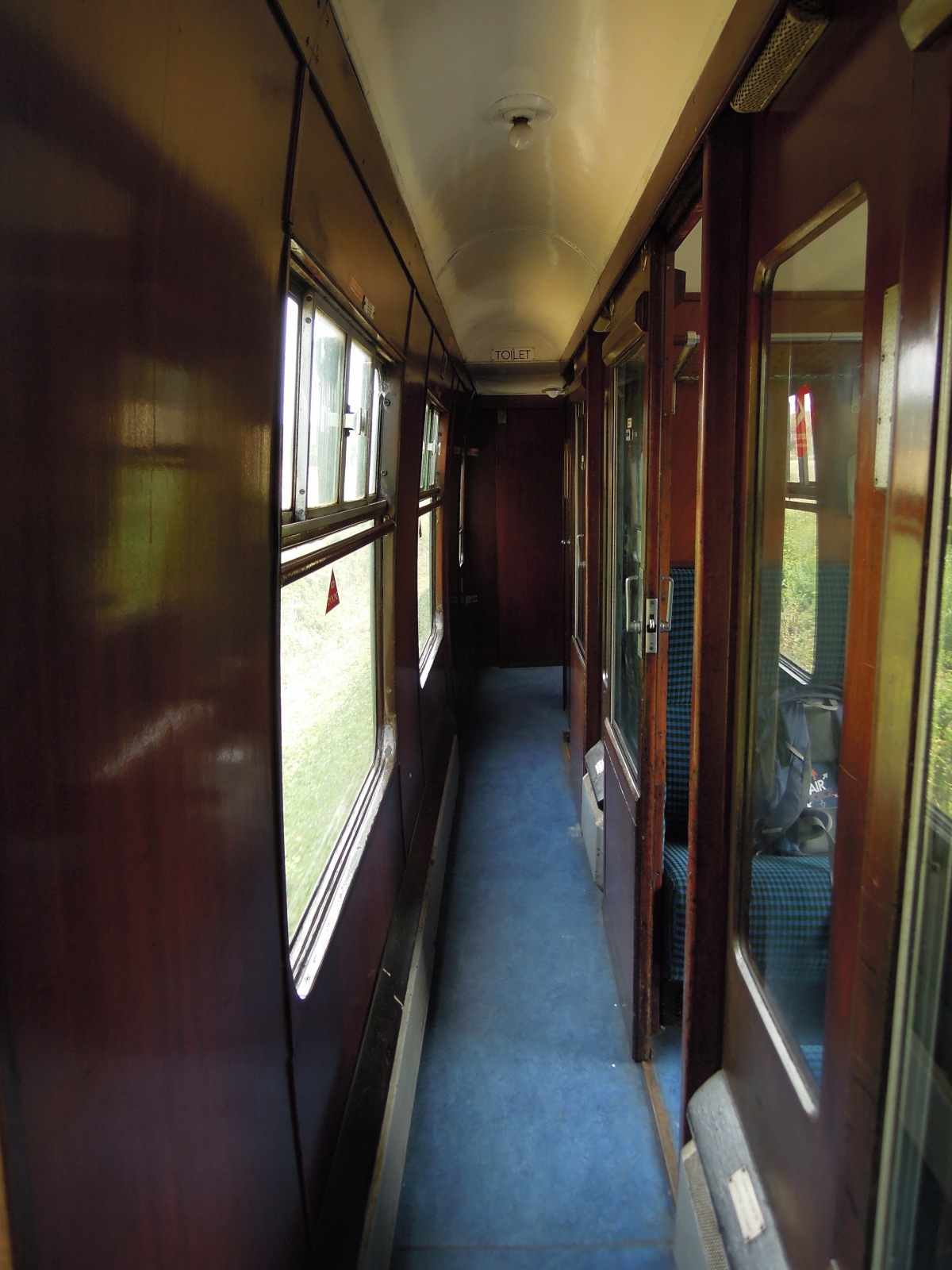 I’m amused by how my photo of Corfe station looks like a miniature set.

We’d driven through the village several times already, en route elsewhere, but it was fun this time to be seeing it on foot. 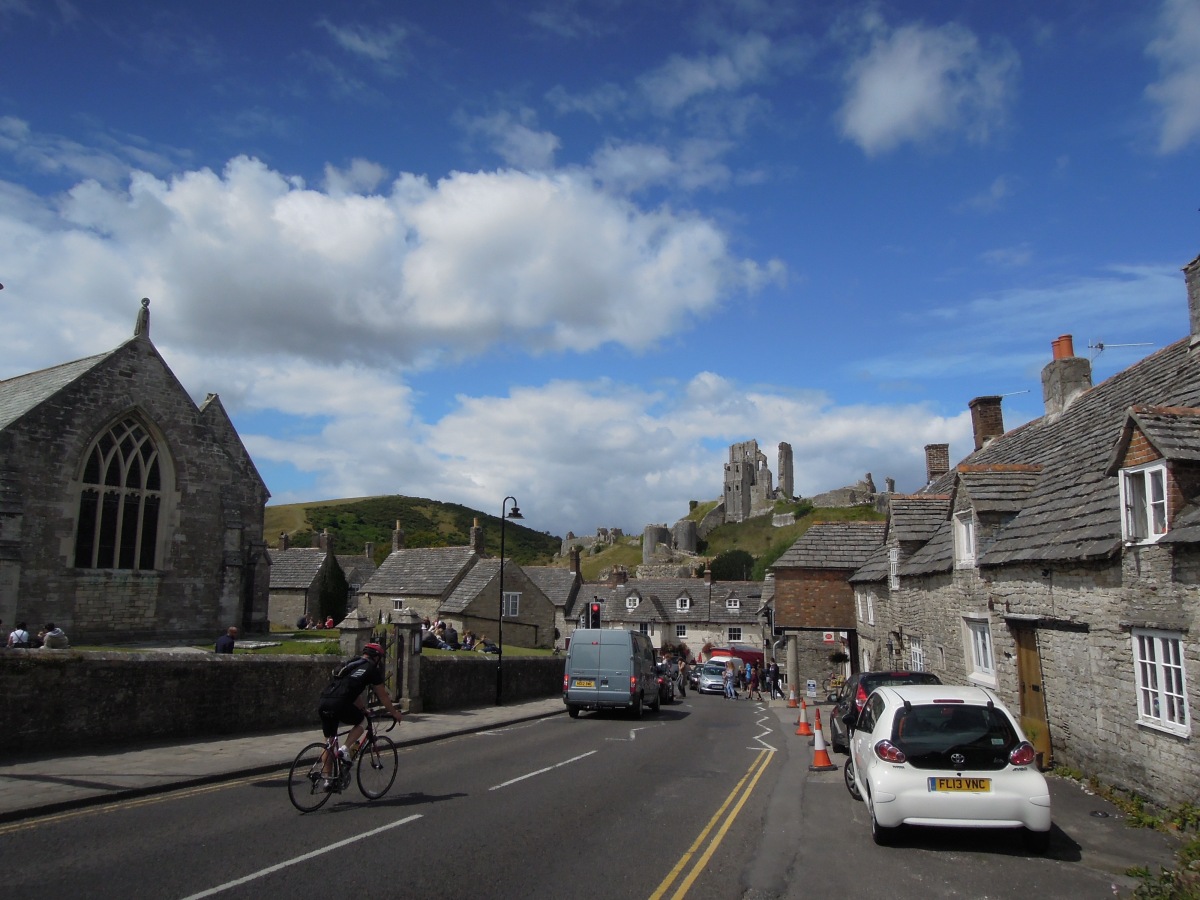 I enjoyed the stone buildings and thatched roofs. (Incidentally, while in Scotland a few weeks later, I met someone who learned thatching from his father and has put those skills to use as a freelance thatcher! Who knew?!)

We found a pub for lunch — it was built in the 16th century — and had a long, rather shivery wait in the back garden for our meal. (It was sunny, but see how much Erik is wearing?) 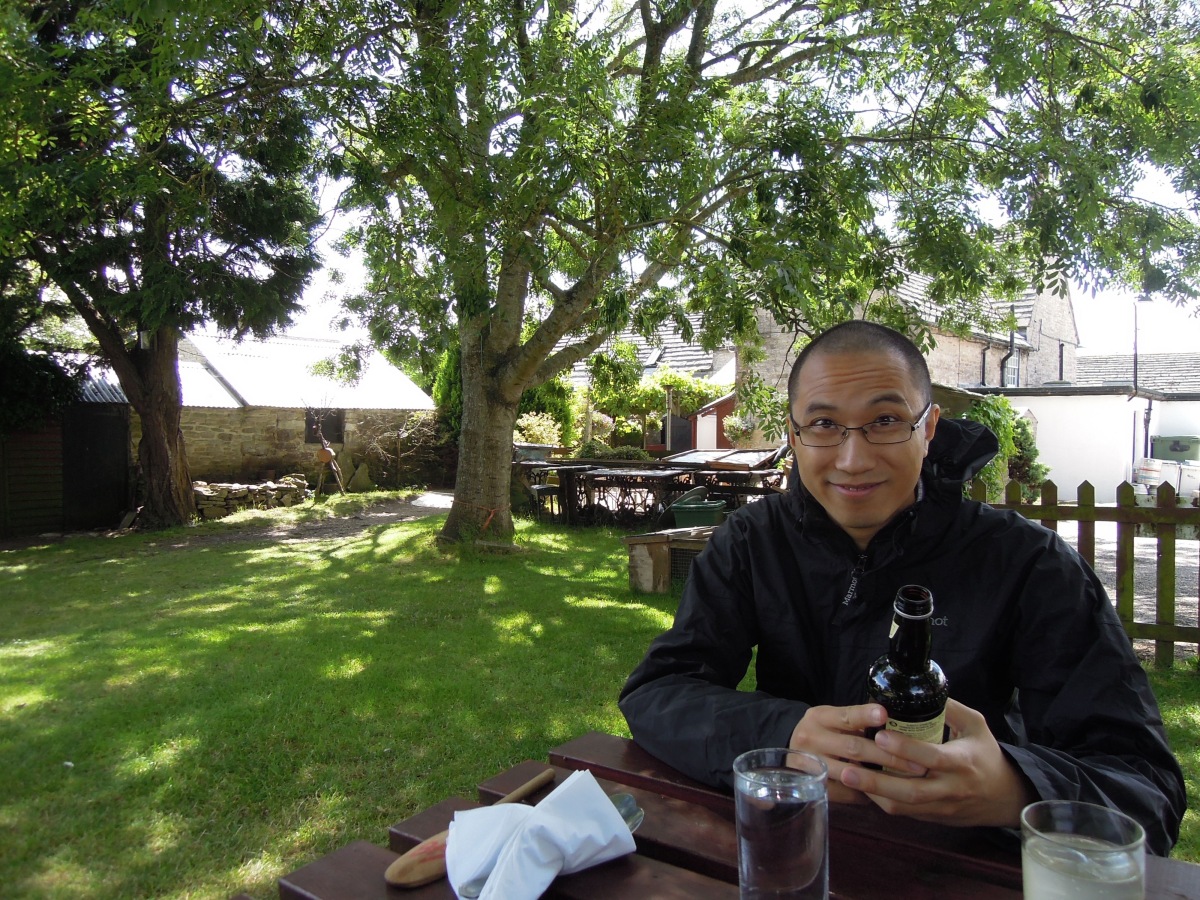 The garden was home to at least one rabbit and one guinea pig, and a family of chickens, who wandered about freely. (There was chicken on the menu, yes, in case you’re wondering.)

After lunch we made a quick visit to the castle. There were many visiting families, and costumed historical interpreters had set up tents where they demonstrated all sorts of medieval activities and trades.

Since we had a train to catch, we skipped the tents and opted instead for views. 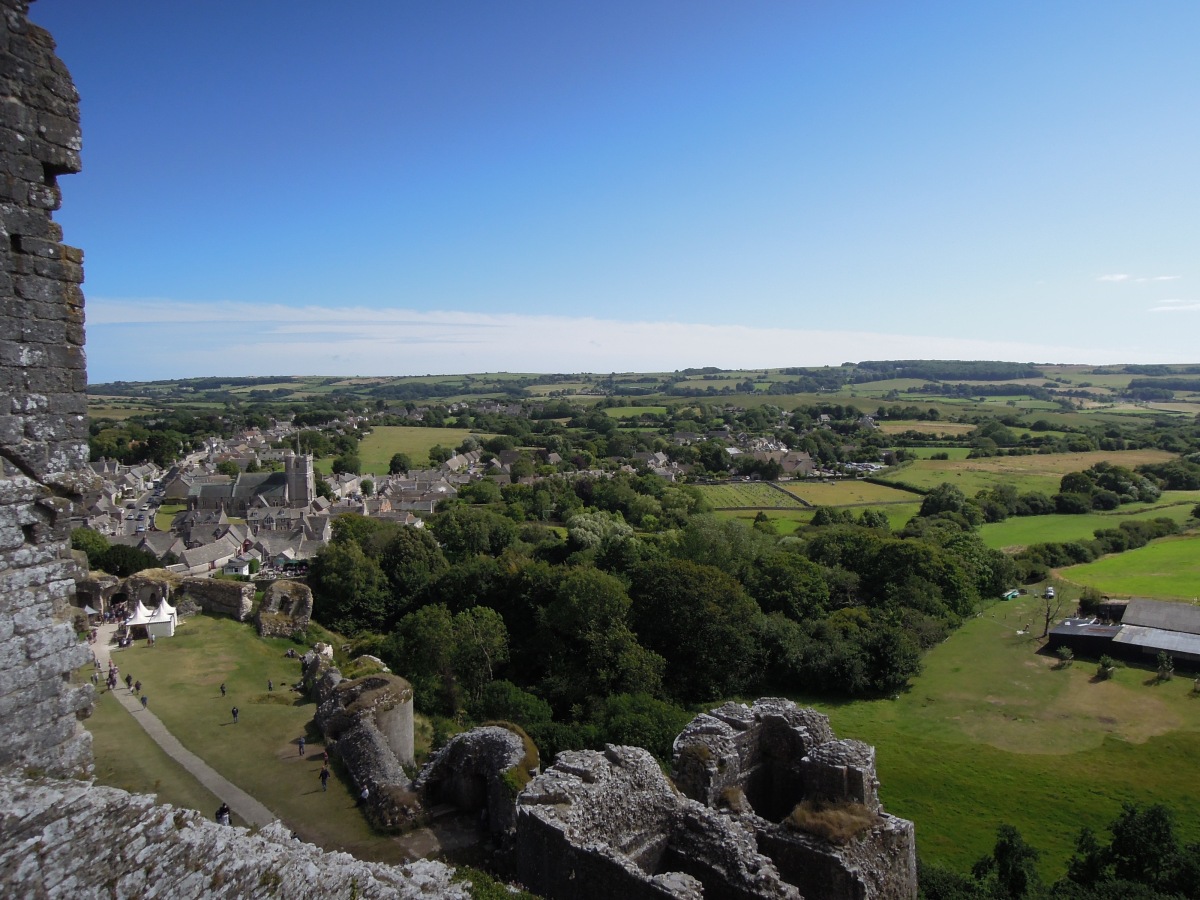 On one of our last days in Swanage, we went up the road from our AirBnB to Durlston Country Park, a nature reserve with a café and visitor centre. There were enough trails there to keep avid walkers busy all day, but as usual, our stay was short.

We thought this was a viewing telescope but when we looked inside we saw this! Nearby there was also a birdcage with miniature furniture in it. I would have liked to know more about these whimsical artworks but I had such limited energy, I couldn’t investigate.

Our aim was to find the most striking views for the shortest possible walk. I think we did well. This is one of the most beautiful trails I’ve ever been on and I only wish we could have spent more time on it.

It was also, like some other gorgeous walks I’ve been on, frankly scary in places: tall cliffs, no railing…

… and in some places the path looked like this. 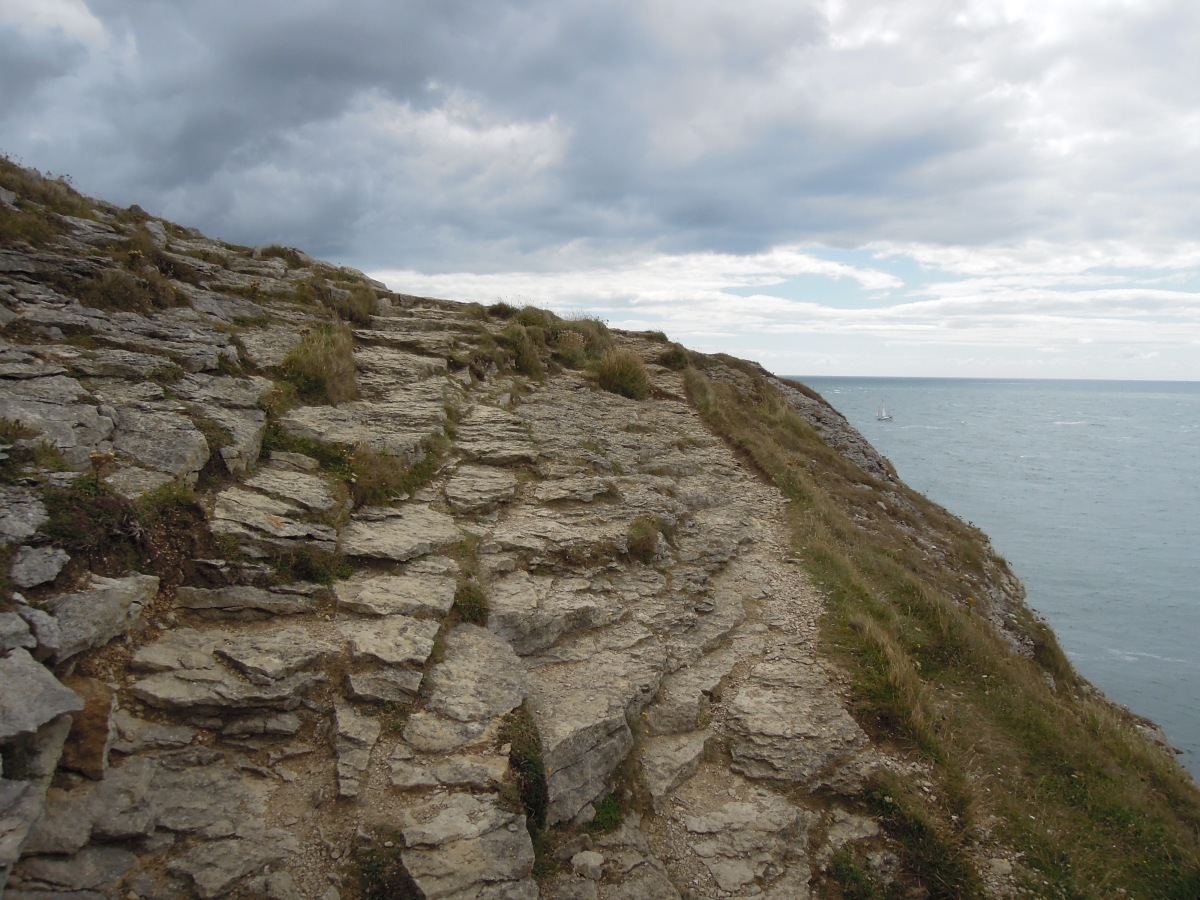 But there was also a lot of perfectly lovely grassy hillside that just invited sinking into. I did actually sit on some of it; it was no Icelandic moss, but it was comfy enough, and I liked looking at the flora. 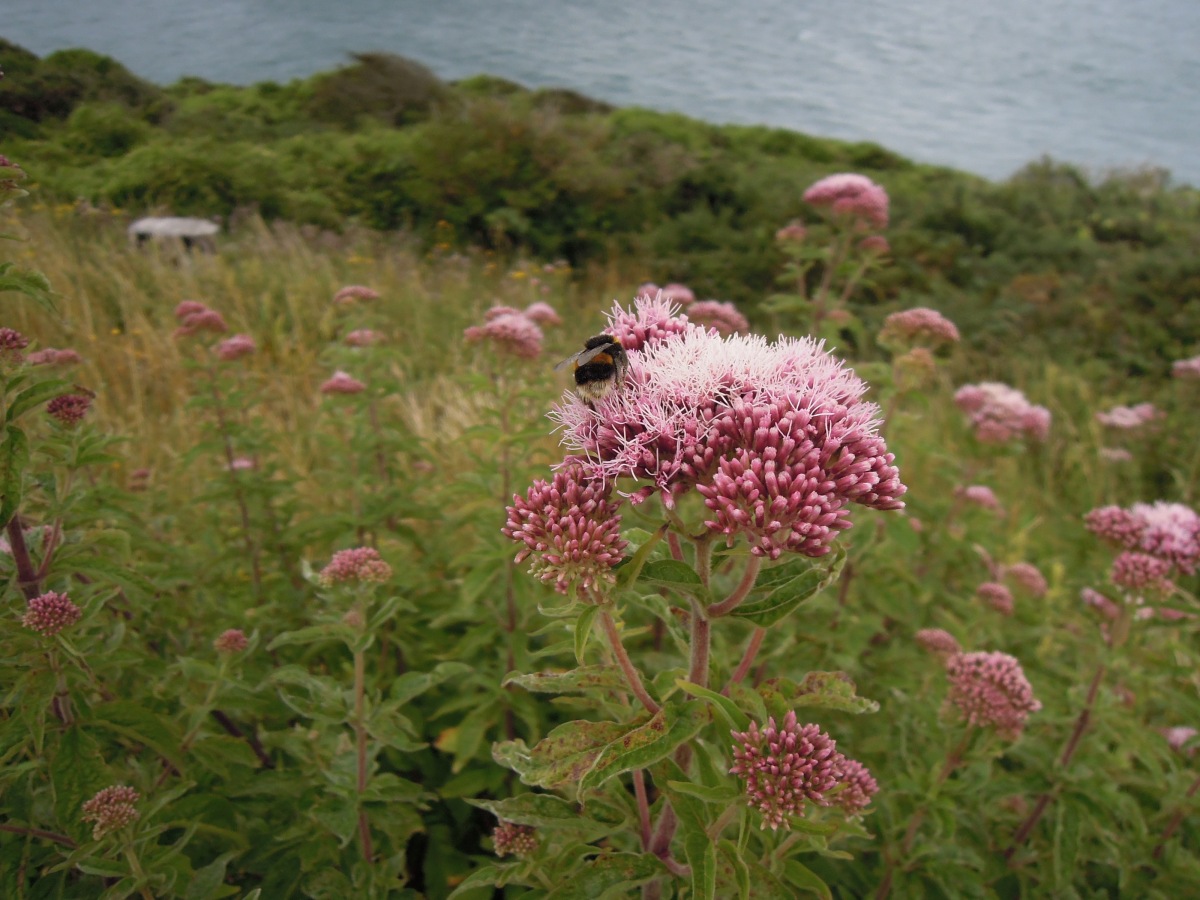 We declined the park’s café for lunch and instead drove down the hill into the town proper. We could have walked it, actually; we would have, if I hadn’t been so tired. (For all of this trip I did a lot more sitting in vehicles than I normally would, not only because walking was tiresome but because I didn’t want to chance walking out someplace and then feeling too weary to walk back.) Up until this point we’d only really seen the town at night or in the rain. It’s an absolutely charming place and I can see why it’s a popular destination. (One vintage travel poster amused me with this vaguely threatening message: “Remember Swanage… People usually do.”)

I have loved trompe l’oeil murals since I encountered my first one at the age of ten, in one of the galleries in Washington, DC. I wish I could remember what it’s called. 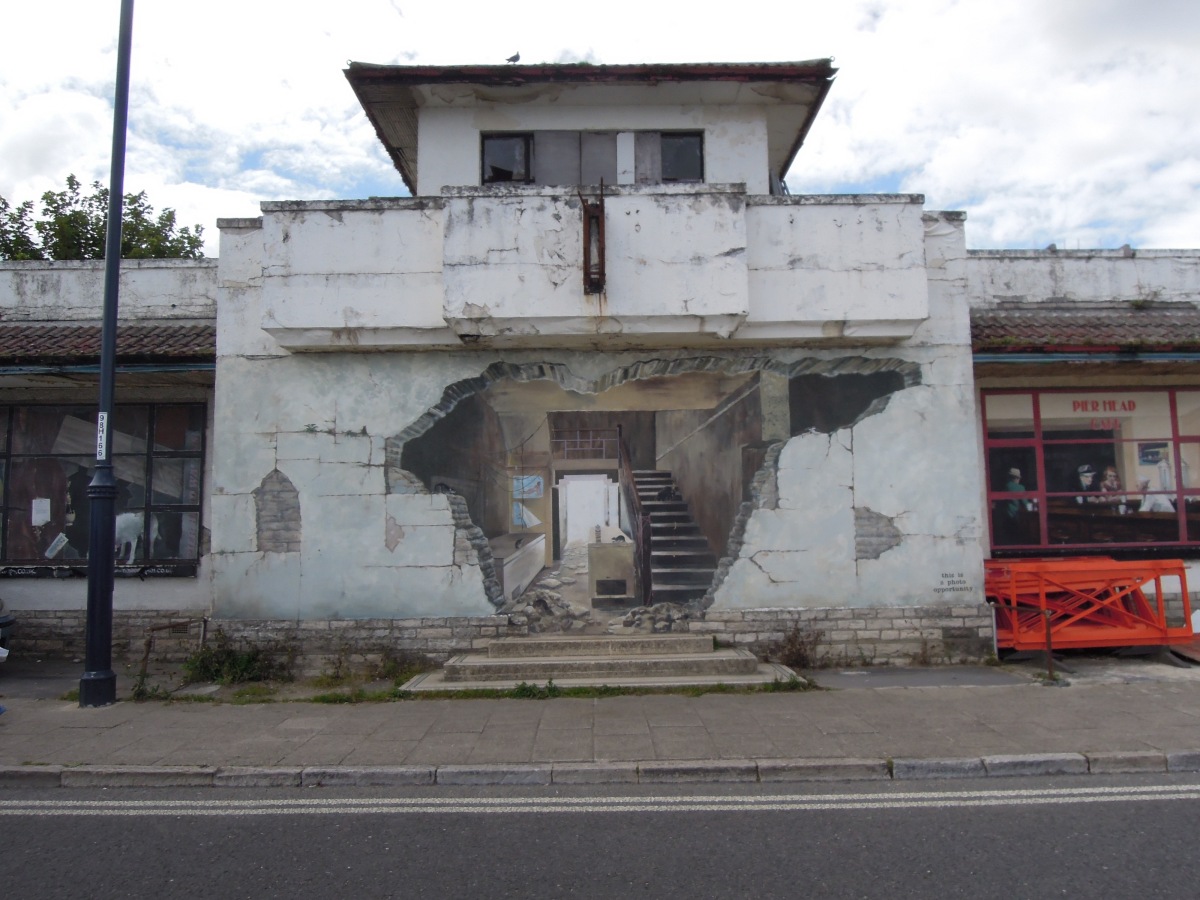 We found a café and I was surprised to discover I was suddenly very interested in sausages and mash. English food, which I normally adore (when it’s done well of course), was lamentably hit-or-miss for me at this time. Pies were too much for me, as were roasts and most sweet baked goods, and I didn’t want fish at all. I would have loved a simple broth and noodles, but not having that at hand, I made do with whatever seemed most possible at the moment. I still remember how very satisfying I found this meal (though I only ate about a third of it!). 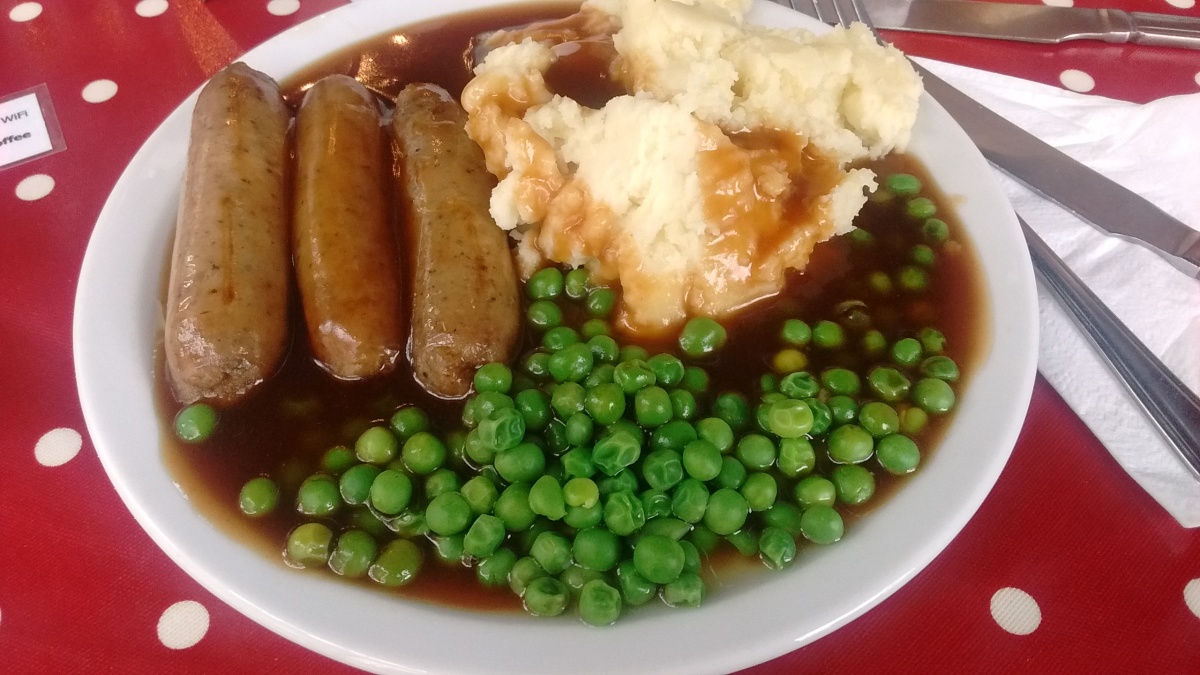 I could fill a whole post with pretty pictures I took around Swanage, but I’ll leave you with just a few.

And one more, taken from the car in the early morning, as we drove from Swanage to Bournemouth to catch the train that would take us back to London. Fog along the ground! So atmospheric.