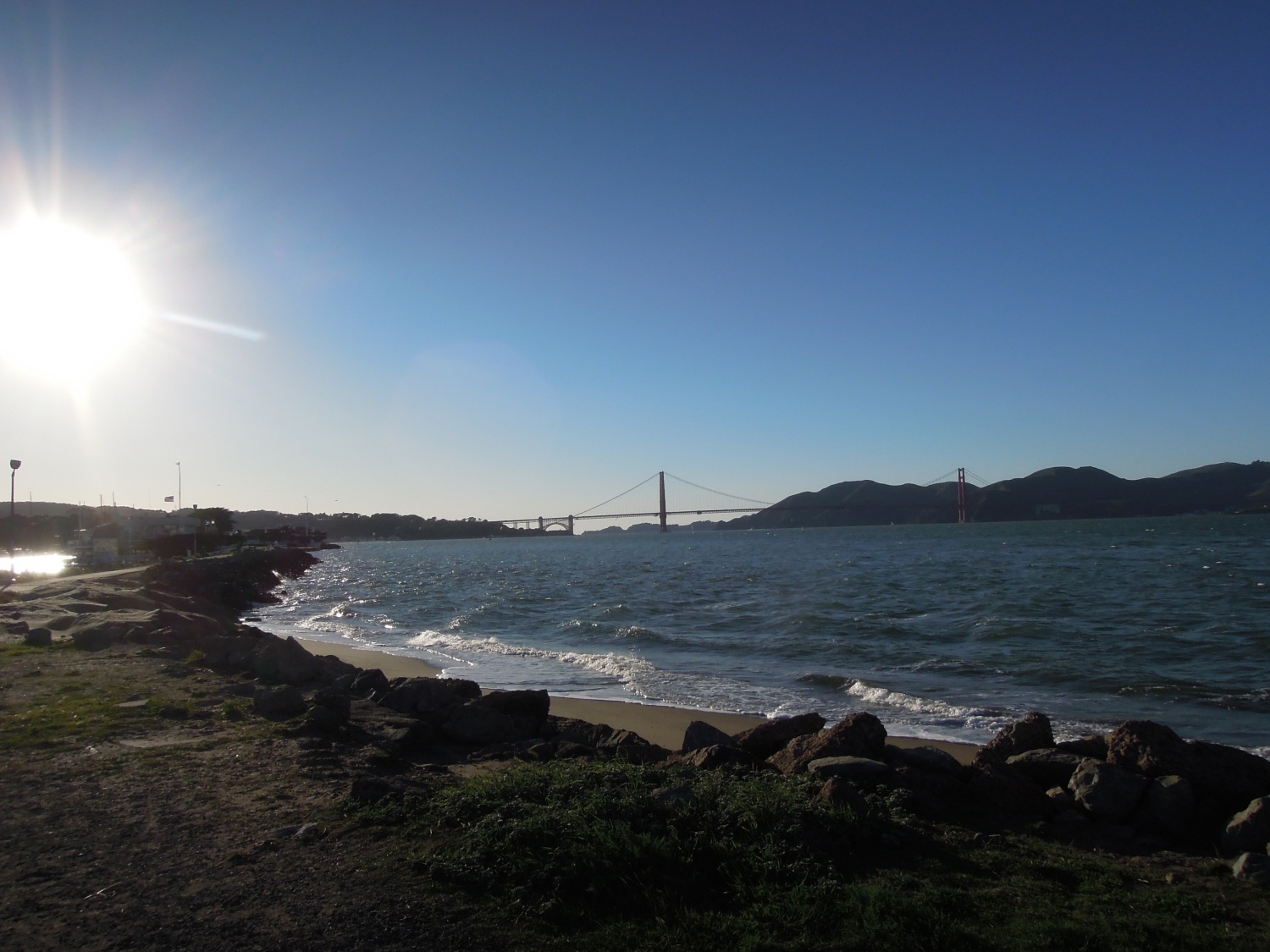 Whether I am visiting a new country or just poking around my own neighborhood, I love stumbling upon quirky spots that not many people know about. They inspire a feeling of discovery, they feed the imagination, and if they are tucked-away, they also nurture my need for standing apart from the crowd. The Wave Organ, a multi-sensory sculpture at the end of a jetty in San Francisco’s Marina district, is just such a destination. I took my Meetup group there last week and we spent an hour relishing the breezes and making conversation. 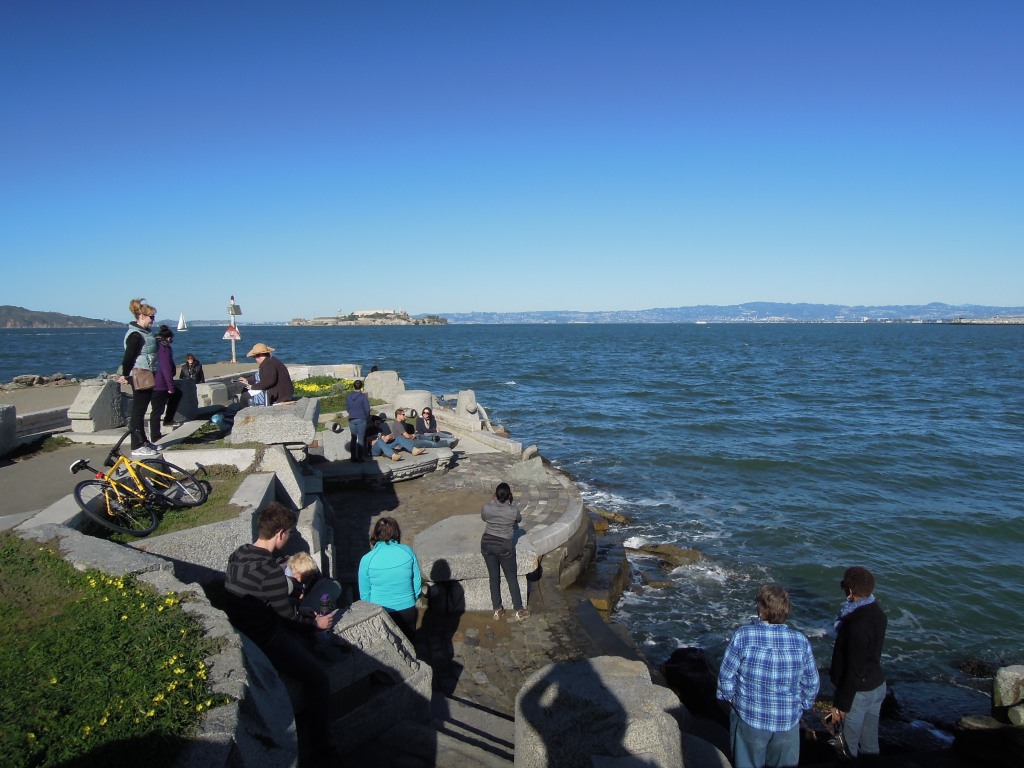 The “organ” has been in this location since 1986, when artist Peter Richards collaborated with sculptor and master stonemason George Gonzales to create a site-specific work using stone from a demolished cemetery and 25 PVC and concrete pipes that visitors can lean against to hear the sounds of the waves.

photo taken by one of my Meetup members, Regina 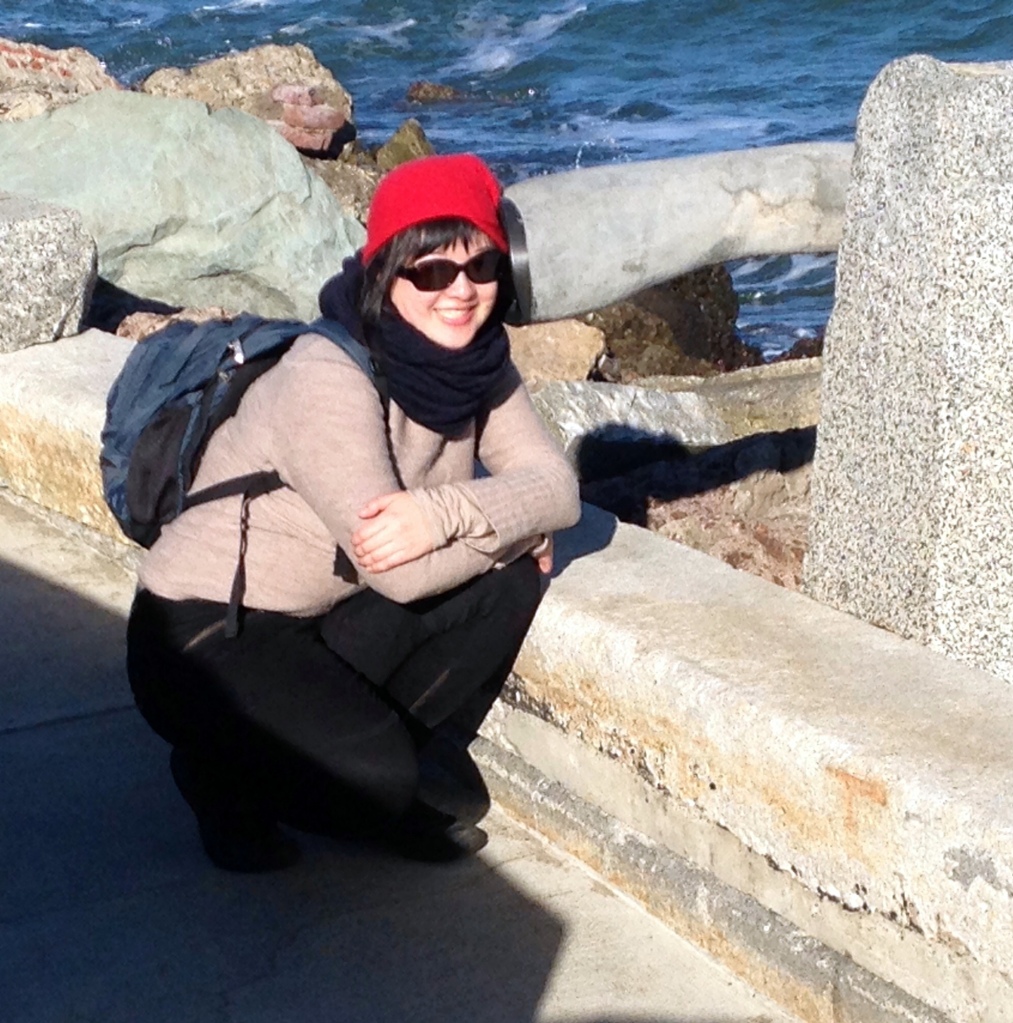 Some of the pipes have filled with silt and consequently don’t make much sound, but others generate a surreal, meditative, subtly amplified playback of the water’s natural audioscape. One of my Meetup members described it as sounding “like the inside of a seashell.” It isn’t an organ in the sense of a musical instrument, but there is certainly something very organic about it. Some of the pipes require an adult to stand/squat/headtilt in odd positions for the best sound, and that felt immersive too; it’s a participatory sculpture. 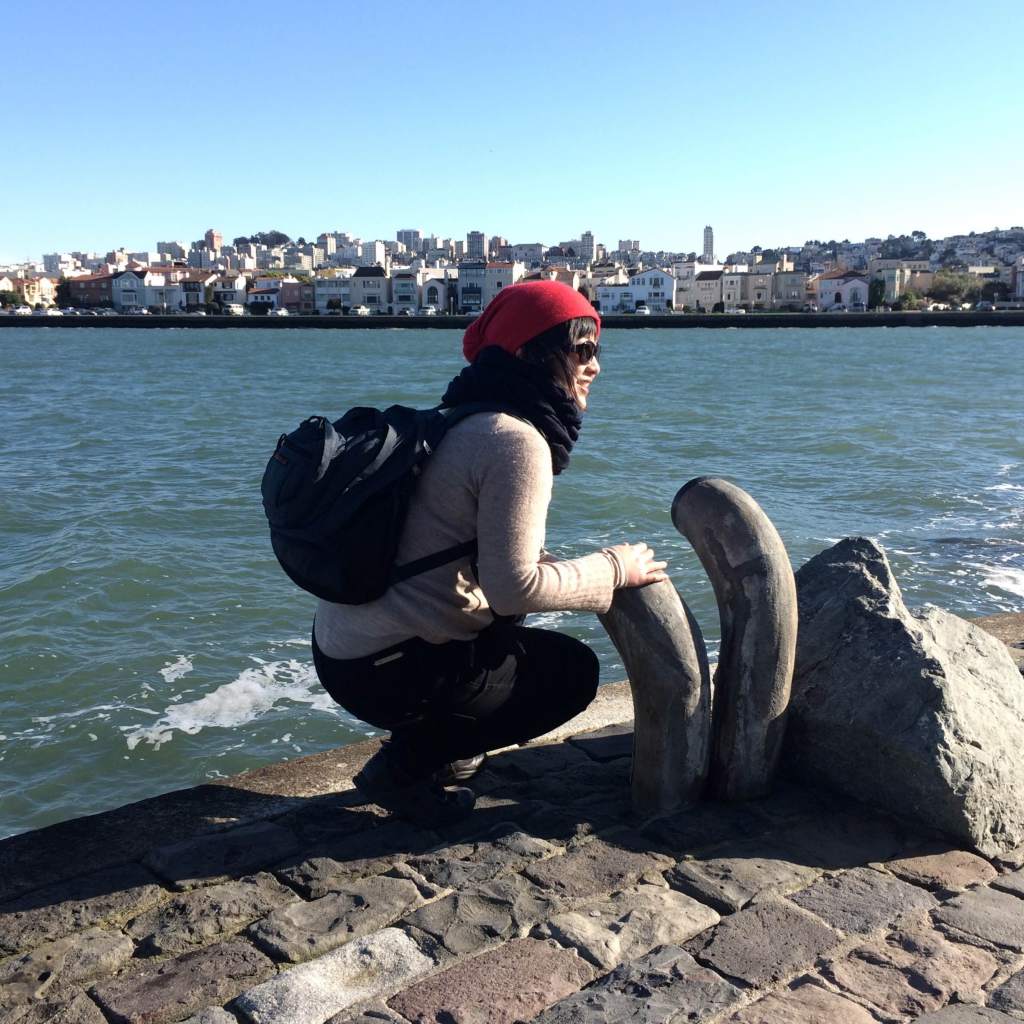 Outings like this always bring out my eye for the odd and unexpected, and since the Wave Organ is built on multiple levels, with sheltered nooks and plants in between the stones, it invites viewing from new angles.

We found a random pile of dimes on one of the stones. I added one to it; as we were leaving, I saw another of my Meetup members scoop the whole heap into his pocket. 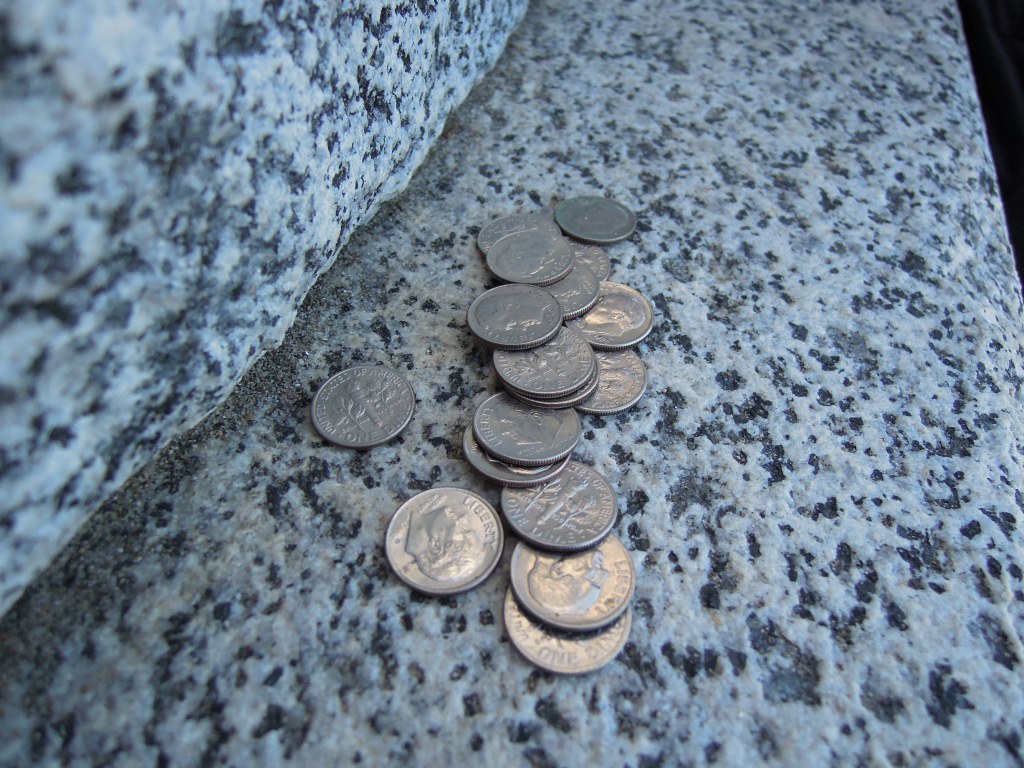 Even if the organ hadn’t been interesting, I would have enjoyed the outing. Planning a waterfront gathering in San Francisco is always a slightly risky proposition, even (or particularly) in the summer months: you might get blue skies and sunshine, or a heavy coating of fog. As it turned out, the weather was perfect during our jaunt, with just enough of a wind to keep everything brisk. (It’s hard to believe that on the other side of the country, whole cities are snowed in!)

Situated as we were on the jetty’s tip, we had water almost all around us, the Golden Gate Bridge behind us, and the city in front. 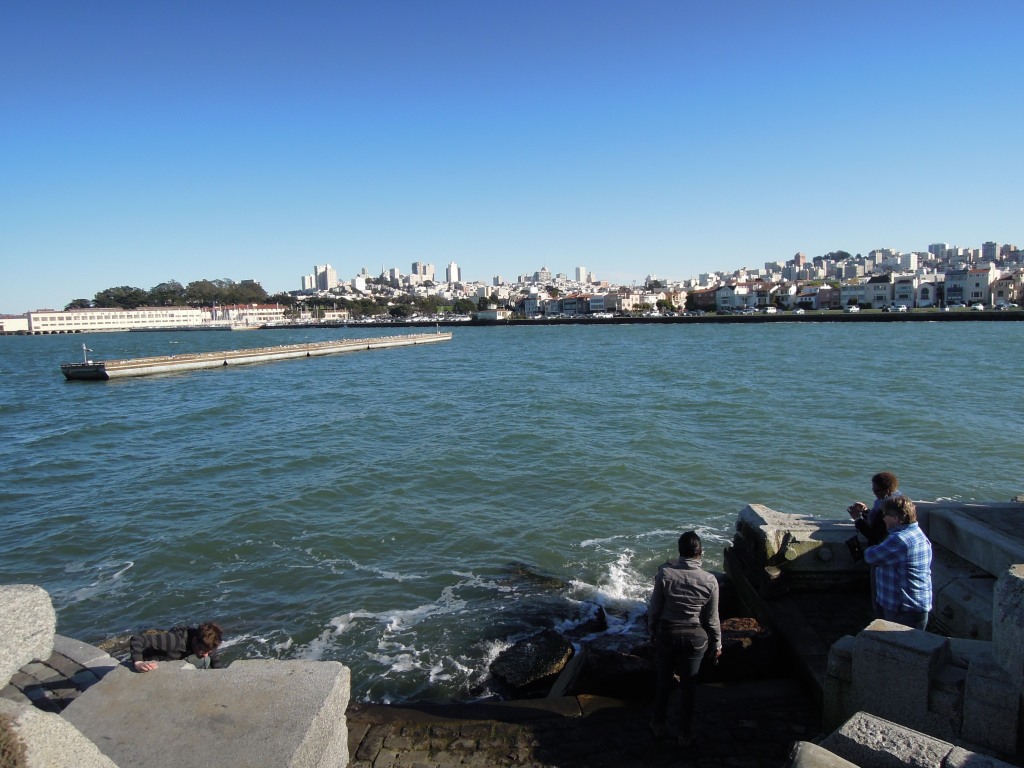 We met at 3:30 to catch the high tide, and by the time we were ready to leave, we got that special late-afternoon light as well, when the sun drops toward the horizon but sunset proper hasn’t yet begun. 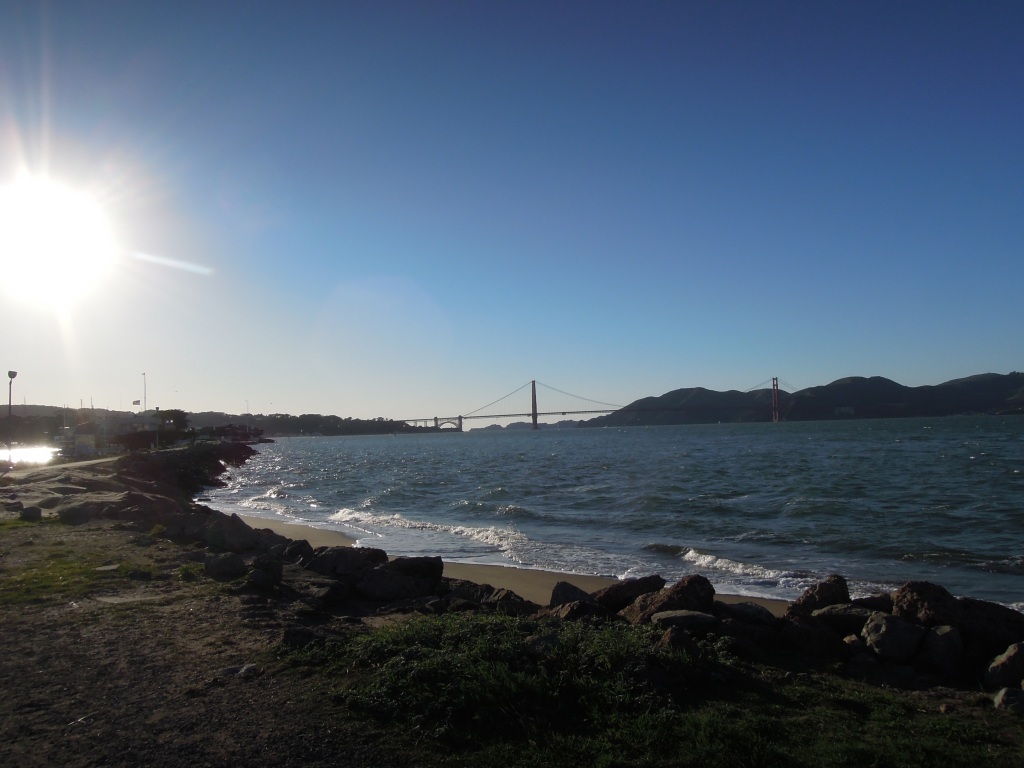 The whole setup also reminded me very much of my time walking along the water in Reykjavík, sketching (with rapidly chilling fingers) and feeling at one with everything in spite of being some distance from home. There is a present-moment-ness about such days that I savor always. 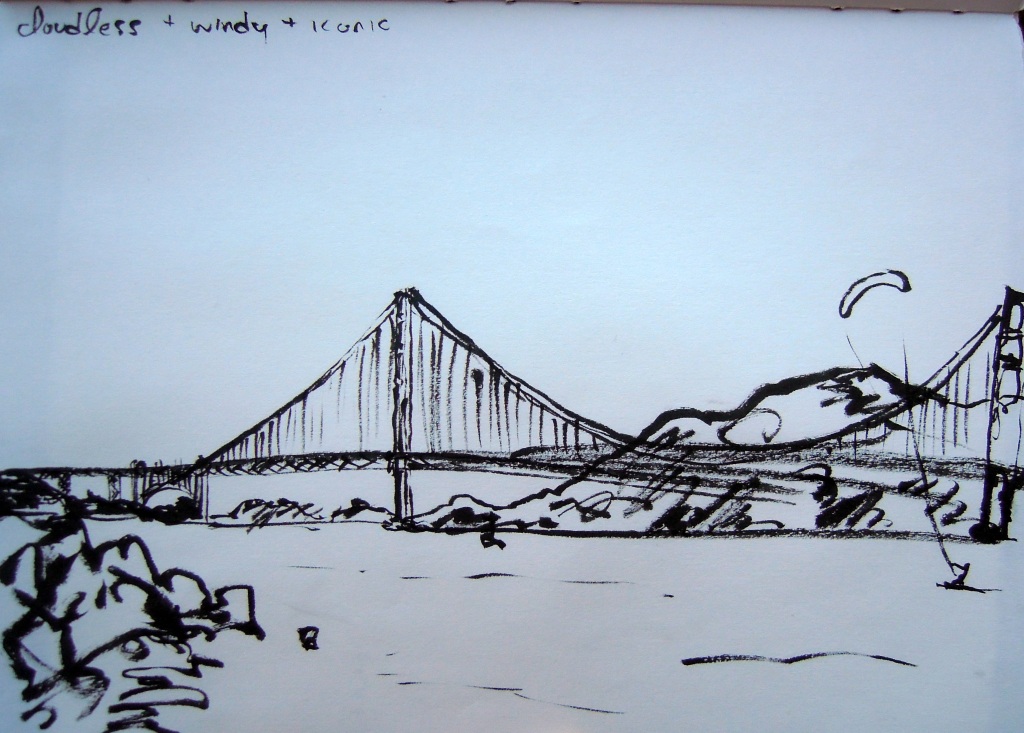 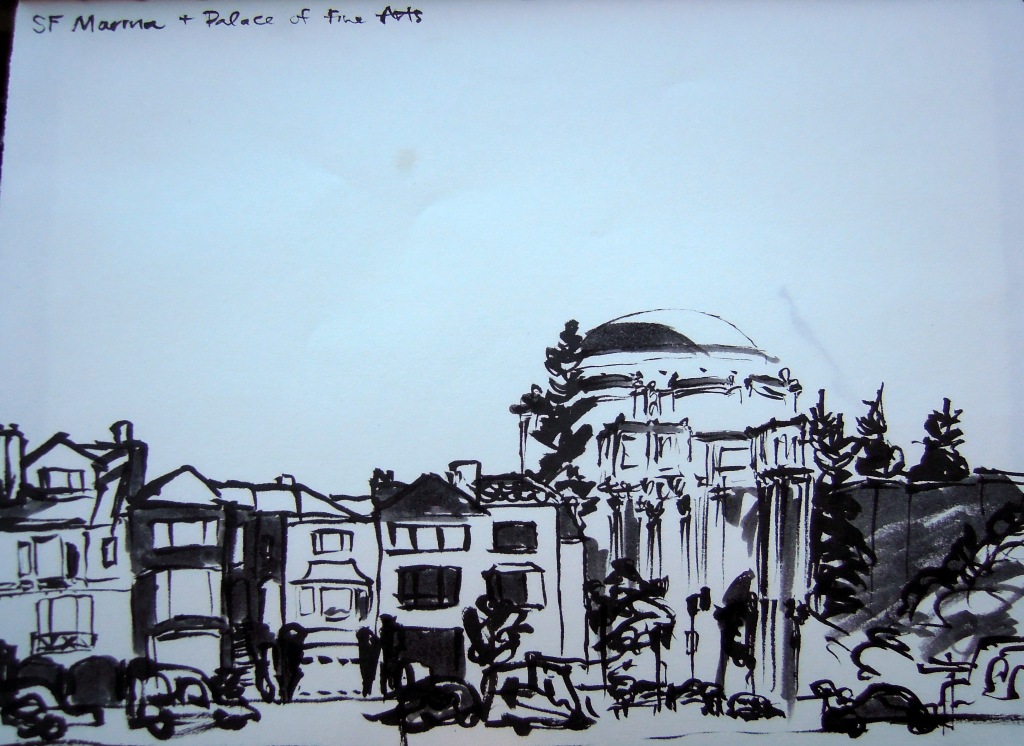 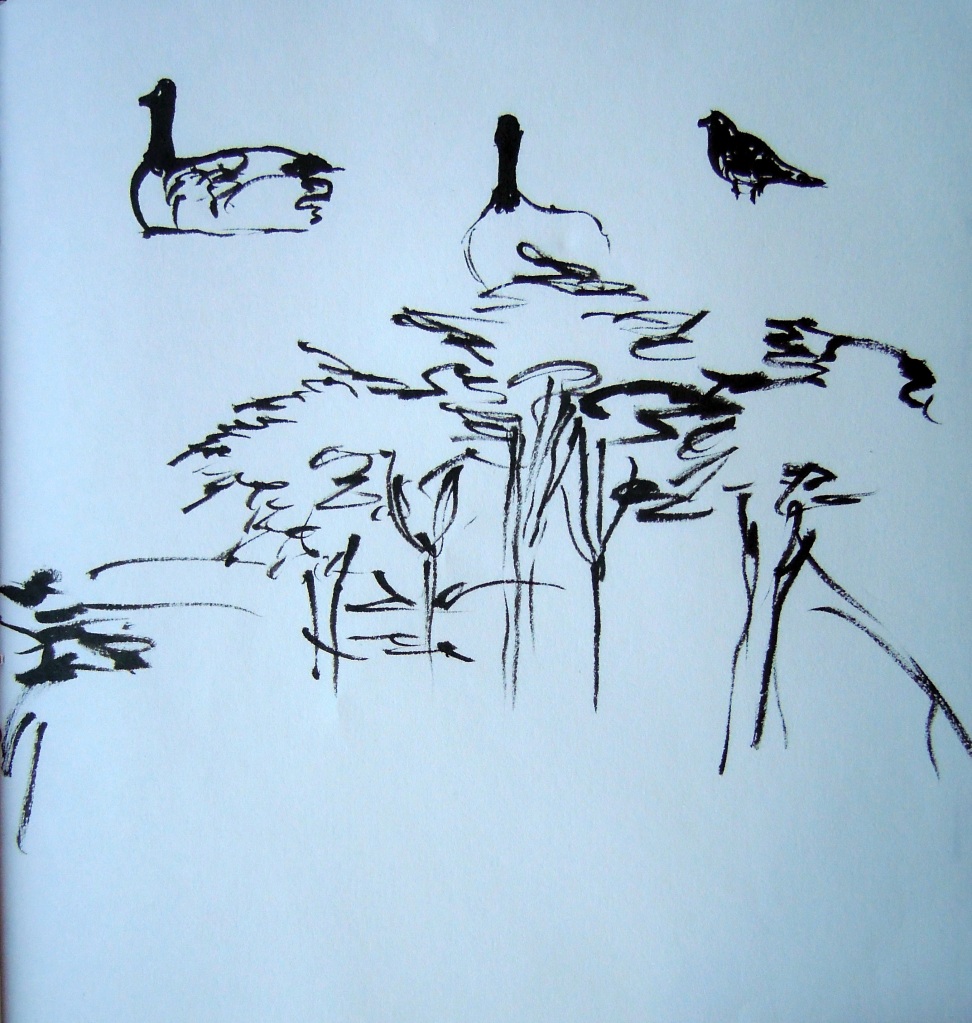 Hear the Wave Organ, and the artist talking about it, here.