I was not happy with the last portrait I did of Erik, one year ago. I have been wanting to make a fresh attempt ever since, but somehow the time was never right. (Yes, we do live together. No, I don’t understand it either!) Finally, after several nonstarters, we put it on our calendar. (We wrote it in for 11 AM. I think we ended up getting started around 2.)

To my surprise, it felt rather alien to paint Erik. I have done a good number of portraits since that earlier one of him, some of friends and family but many of strangers. Most recently, I’ve done portraits in the back area at Manifesta, lugging my portable easel and a bag of supplies to each session and repacking it all again afterward. I had been thinking of this as a very makeshift setup, but I guess it has come to feel like home, because this time, it was painting at home that felt foreign! (Also, the salon has these foldable, rolling workstations — the stylists use them for mixing haircolor — that are absolutely perfect to use with my easel.)

Also, I’m not sure if it’s Erik’s qualities as a model, or my total familiarity with his face and person, but I feel as if I have a harder time seeing him.

I began as usual with a pencil sketch. I used to dislike this step, but it was actually that first dissatisfying portrait of Erik that made me realize how important it is. If the sketch isn’t precise, the whole painting will be off. Fortunately I’ve also gotten much much faster at this step. I think it used to take me half an hour and these days it hardly ever takes longer than 15 minutes. (Of course, now that I’ve said that, the next one will probably take 40.) 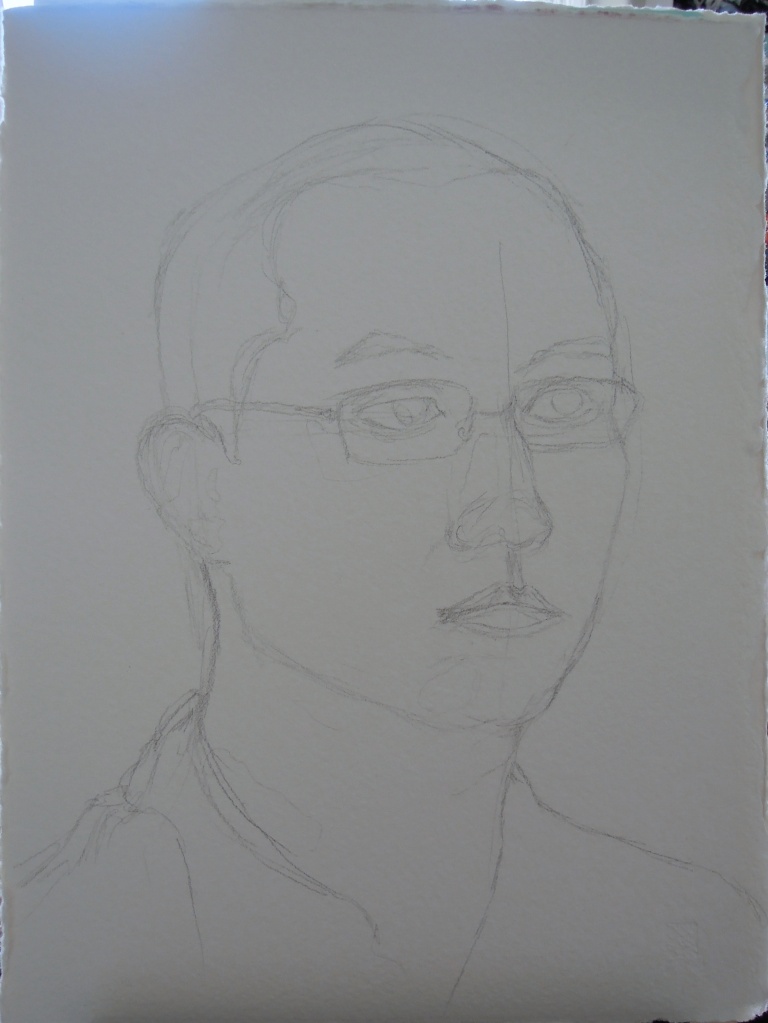 Since I’m so comfortable with Erik (duh), we were at home, and I had all the time I needed, I decided to do more layers on the skin tones than I usually do. At the salon, with distractions and under time pressure and with the additional jitters of attending to someone I’ve just met, I usually just do one base tone and then mid-tones and shadows. But with Erik I did several more, and that let me change the tones more subtly as well.

At first everything looked way too orange, but I fixed that somehow. It’s still kind of orangey but not the awful fake-tan color it was at first. Color is a tricksy thing and I still have everything to learn about it. Colors that look bad while wet can look good when dry. Colors that look “off” by themselves can be perfect when you put another color next to them. And what looks like a single color is usually a mix of several, including some that seem totally incongruous (there might be blue in a skin tone, for instance).

This is the finished portrait, a little higher-contrast than in real life. It is a thousand times better than last year’s, but then, so is my eye, because I’m still not totally happy with it!

As I said about my portrait of Steph, there is something quite alchemical and magical about doing portraits. There is always a moment when the marks I am making shift from mere marks to containing some essence of my subject, and that is so uncanny that I never cease to be awed by it. In the case of Erik’s portrait, the portrait has been sitting on our dining table for a week because I can’t decide whether I want to hang it up. Every time I walk by, it looks so much like Erik that I am drawn to it naturally, but then when I get closer, it’s as if my husband was replaced by some dude who almost-but-not-quite resembles him, and I find it mildly unnerving.