Of course, two weeks before we leave for Boston, I learn about a good, inexpensive, regular uninstructed life drawing group not too far from my parents’ house (thanks Rob!). I went on Monday, when they did short poses (1-20 minutes), and again last night, when there was a single pose for the entire three-hour session. Monday was fine. I had a great time. 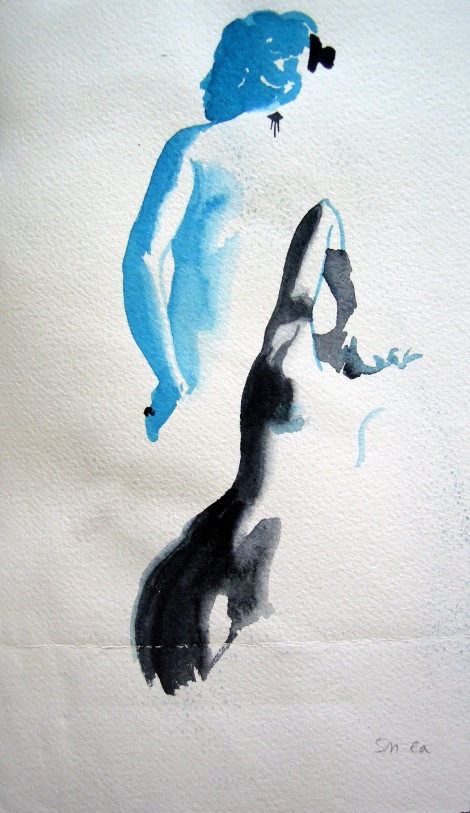 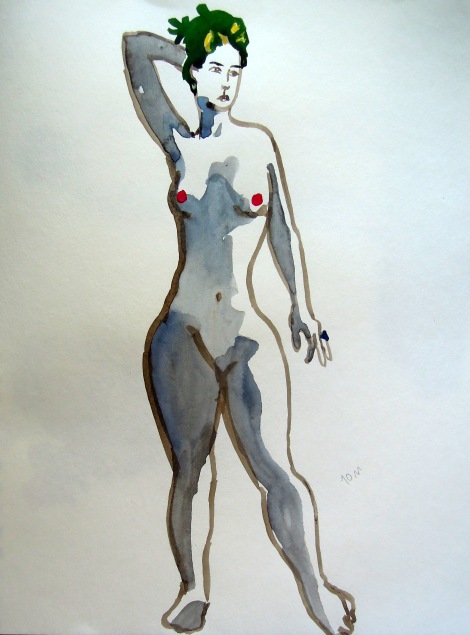 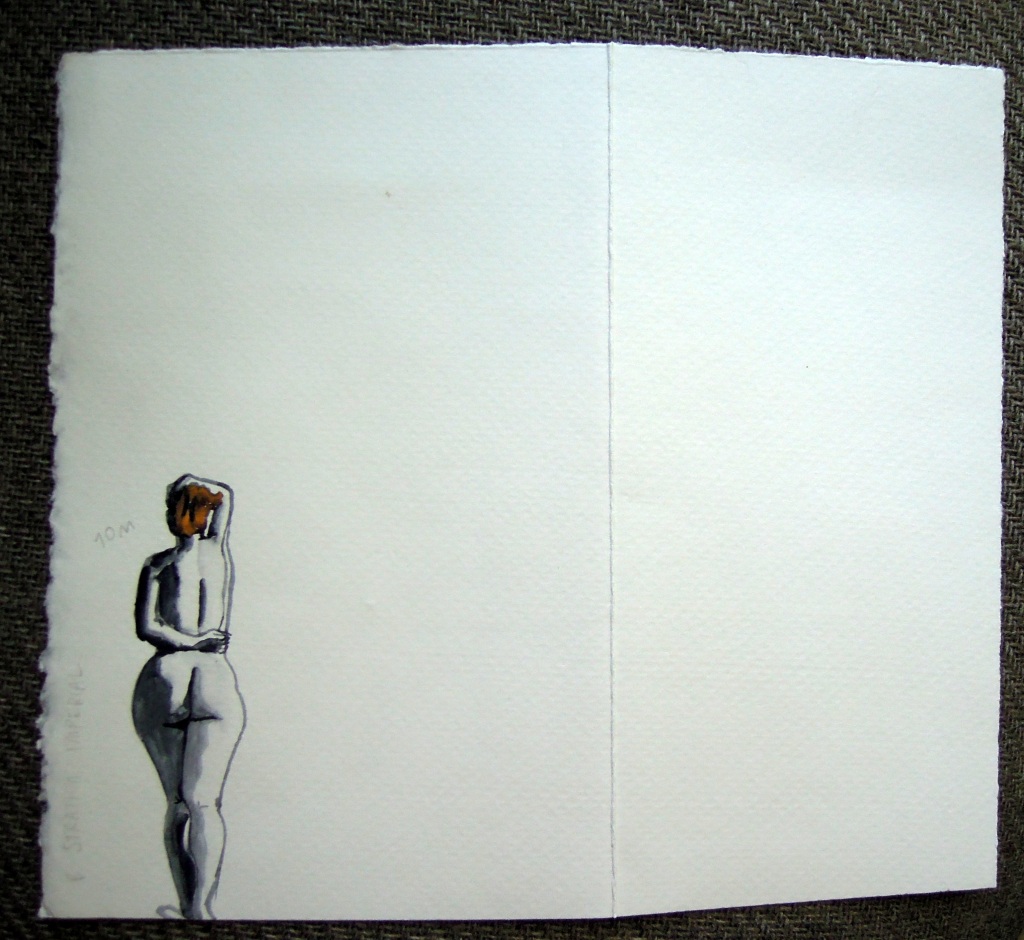 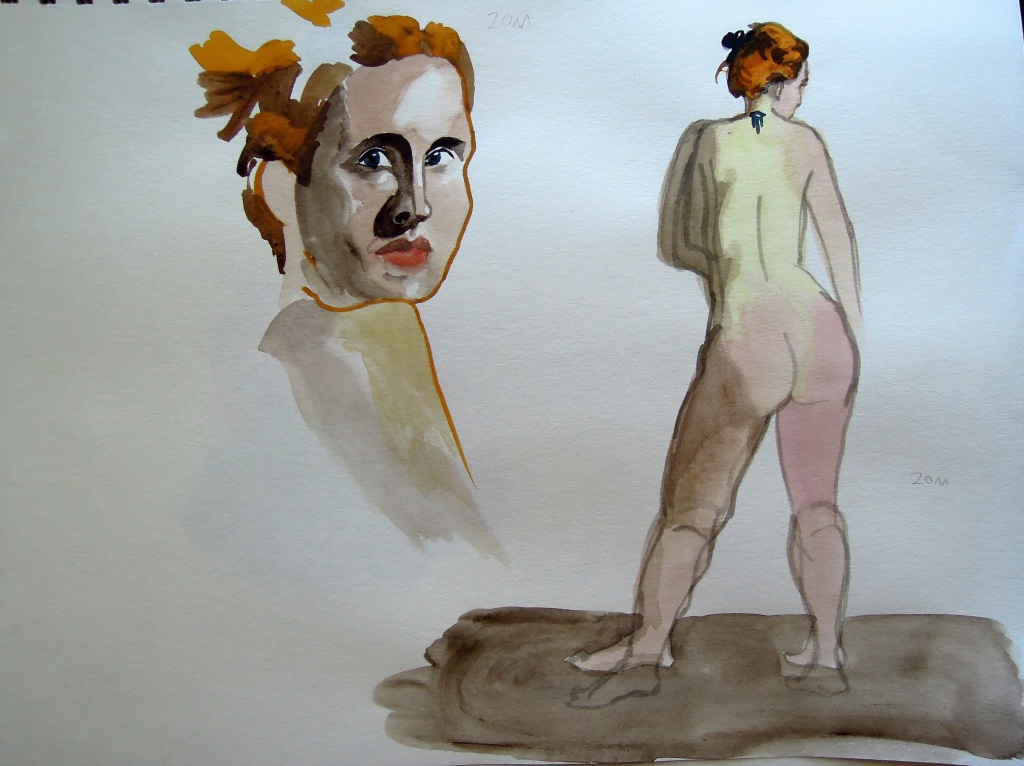 Last night was a different story. Maybe it’s because I was able to see several other artists’ work from where I was sitting (and they all looked good), maybe it was bound to happen anyway, but the session went like this in my head:

Naturally, this being my internal dialogue and the session being three hours, that was the condensed version.

I’ve written about this before, but I have such a terrible inferiority complex about my art (since I have no formal training in it). I can fairly happily draw or paint for three hours on my own, but throw other people into the mix — particularly older and more experienced artists — and suddenly I’m a hideously awkward teenager at a party. I want to make friends but I don’t want to talk to anyone. I want people to talk to me but when they do I wish they would go away. I crave approval, but f— everyone and their opinions, I don’t need them! Everyone is amazing and I suck! I am amazing and everyone else sucks! Bottom line: OH GOD I AM DOING THIS ALL WRONG

On Monday everyone mostly sat in their places and did their work, but last night people circulated and looked at each other’s papers and canvases. One man who was there both days came over and looked at my sketchbook and then at my palette and said, “That’s a lot of colors to be working with.” A completely neutral statement, and in fact true. But since I was already an hour into richly marinating in my own insecurities, I immediately thought, “OMG I am not supposed to be using so many colors / he’s telling me my work is bad / he knows I’m the rankest of amateurs / he’s looking down on me / if he can see this everyone else can too.” Not a good foundation for a reasonable conversation. So what I said was, “Oh I know,” and then he moved on to the next person. Rational analysis suggests that my “oh I know” may have come out rather curtly, giving the perfectly plausible impression that I was in the creative zone and didn’t want to talk, but again like the awkward teenager, I then spent the next hour mentally re-mortifying myself with this exchange, over and over.

This happens quite often at these sessions, actually. If people look at my work and openly admire it, I fear they have no taste, or they’re just being kind. If they look at it and say nothing, I fear they think it’s bad. If they don’t look at it, I fear it’s not worth even looking at (as if people could somehow tell this without even looking at it…). As I paint, my left brain is unoccupied, and so it amuses itself replaying every interaction and casting it in the worst possible light. Then the more compassionate part of my left brain will say, “Hey there, hold up, it’s possible you’re interpreting this wrongly. You’re so uptight about all this, it’s possible everyone is just leaving you alone because you are sitting there radiating defensiveness.” Then the rest of me thinks, “That could be true… OR IT COULD BE NOT TRUE,” and I’m back where I started. Meanwhile painting is happening and no one has any idea what’s going on in my head. (Also in the meantime there is another voice rolling its eyes — pretend a voice can have eyes and roll them — and saying, “Good god, you’re neurotic. Can you just stop thinking about this? It’s doing you no good,” but of course no one listens to her.)

I realized last night, after I got home, that though it’s uncomfortable, it’s useful practice to spend these hours sitting with my freaked-out inner voices.* In a strangely social way, I get to know them: their motives, their fears, the way they play off each other. It’s like taking a long bus ride with someone I think I don’t like; as we’re forced to spend time together, I begin to see what we have in common, and empathy follows. Perhaps we could be allies, if not friends.

I often express gratitude that I never have to be a teenager ever again, but what are these wretched bouts of insecurity if not replays of my teenage self? Adolescence, after all, is merely a state of acute growth and transition, leading to something different (and, we hope, better). It is probably a good sign if I’m having teenage moments while doing something creative; it probably means I’m growing.

And here’s the painting I hated for probably two hours before I decided it was all right: 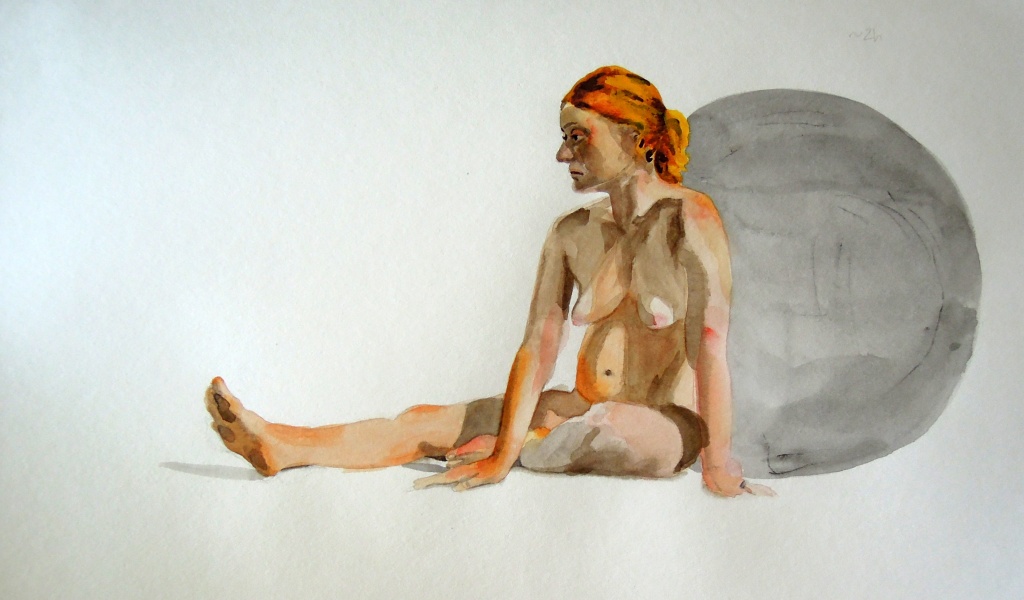 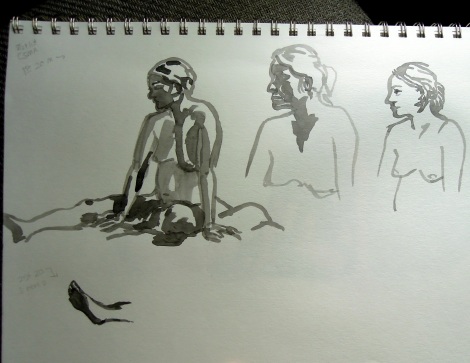 Process photos, taken every 20 minutes (sorry about the lighting; the studio is not ideal for photography): 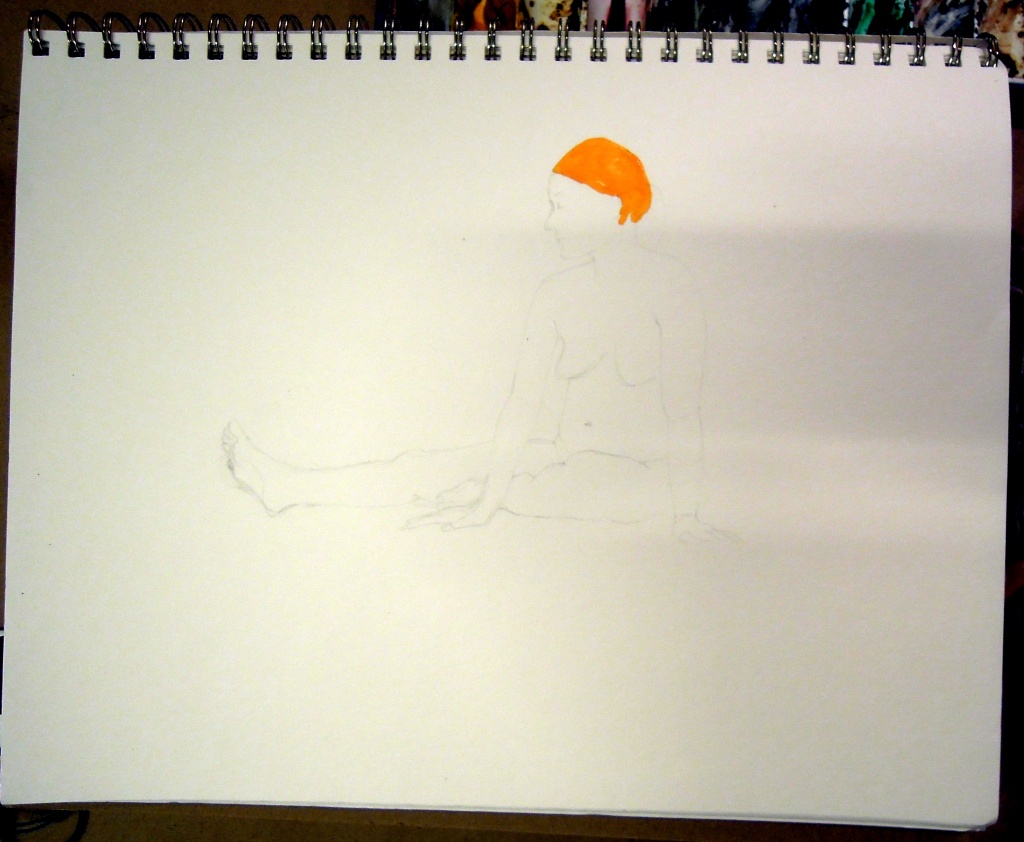 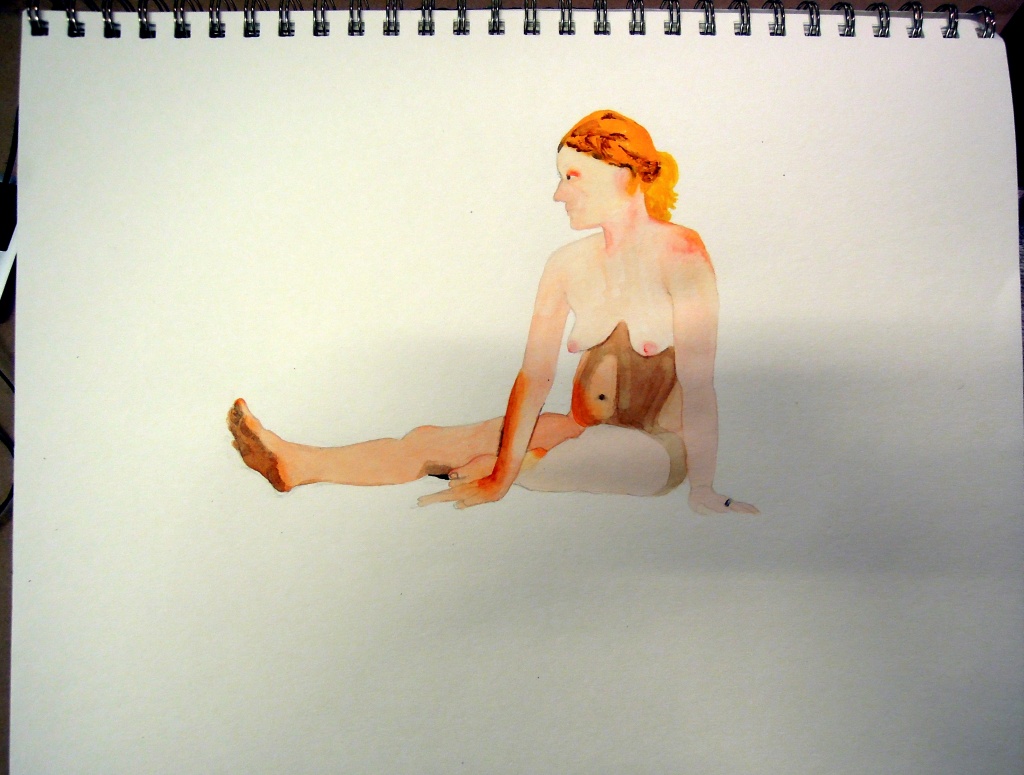 This is about the point when I stopped hating it.

*This is not my first post referring to my noisy inner voices.

Leave a Reply to Life drawings of a pregnant model, and further thoughts on self-doubt, gender, and otherness | satsumabug.com Cancel reply