I’m so distractible today, my greatest accomplishment of the last six hours is that I made a small pot of simple soup (chicken, onions, ginger, wine, soy and fish sauces, miso). And I have maybe decided on an outfit for the Chicago panel. And there you have my state of mind: I have not packed, I have not prepared what to say at the panel, but I have a maybe-outfit. I wonder if someday they will find a cure for these scattershot states. Maybe I need a walk. I walked five miles yesterday; maybe I’ve got unspent energy today.

On Tuesday evening I went again to the life drawing meetup and this time the model, Anjuli, was extremely pregnant; her due date is in three weeks! I don’t know how she held the poses, but she did, and even said she found them a nice stretch. I enjoyed drawing her — and spending some more time with my Japanese scroll. 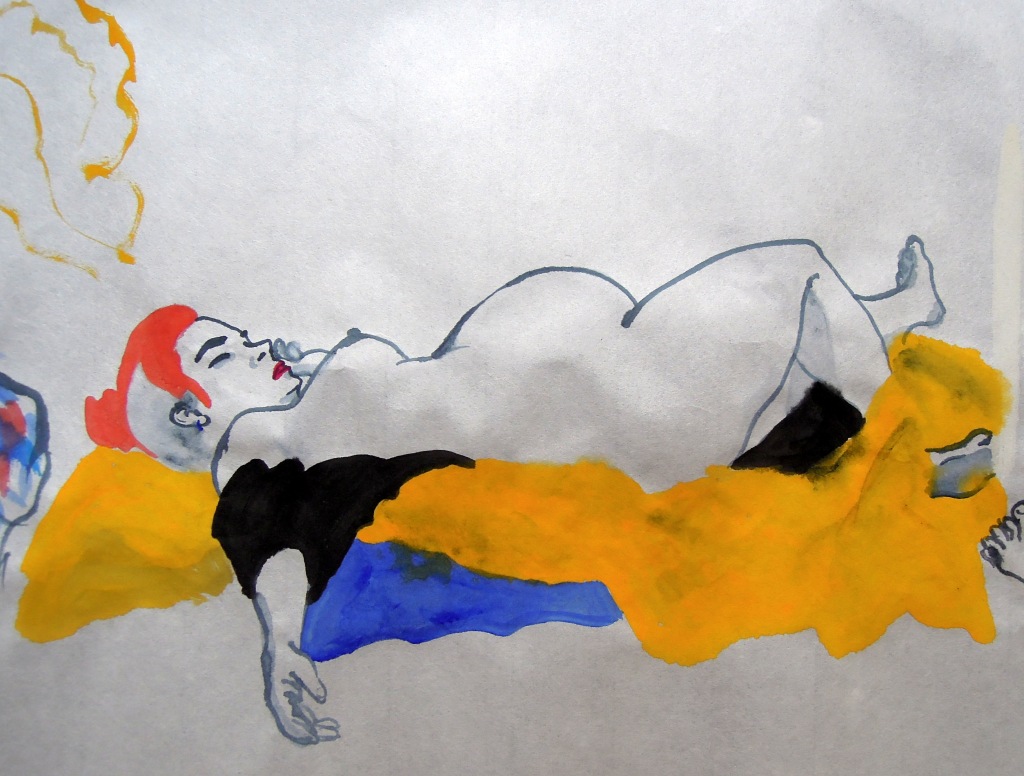 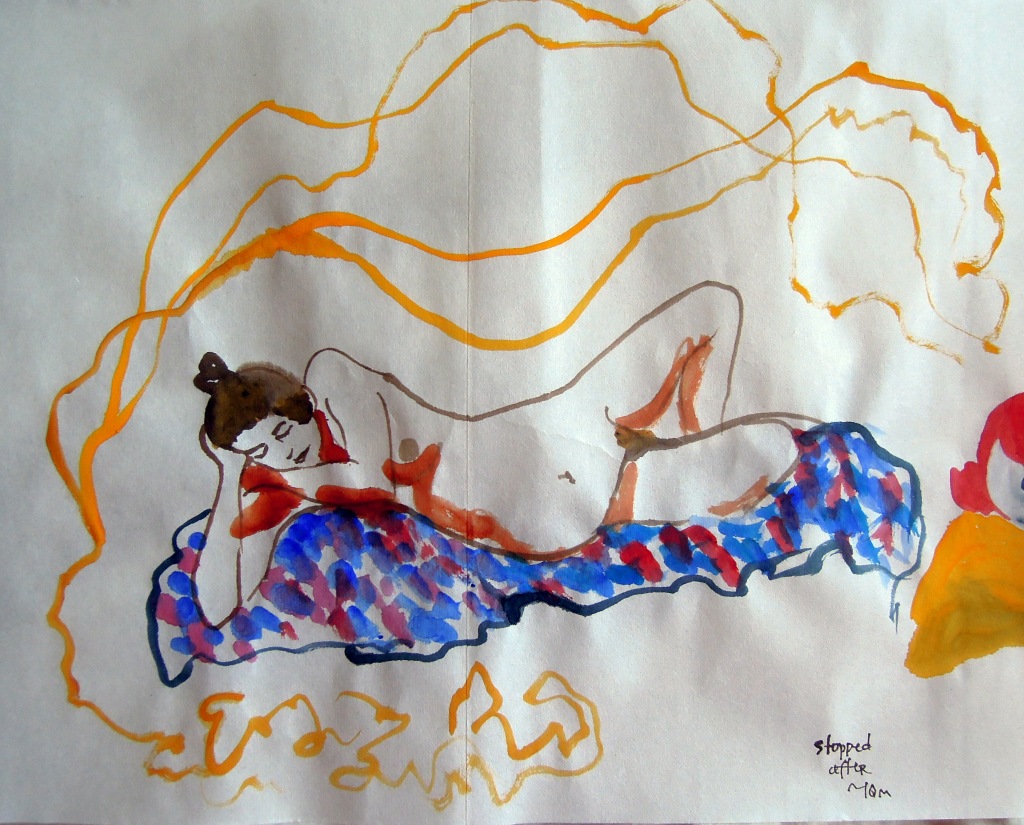 Longtime readers, do you remember that time — almost exactly a year ago — when I spent a life drawing session utterly consumed by insecurity and negative self-comparisons with my fellow attendees? That time, it was a remark about my use of colors that set me off; this time, three people remarked on my colors, again in terms that were entirely neutral (and therefore open to interpretation). At first I felt very proud of myself for not reacting with instant self-doubt. I thought, “Hey, look how far I’ve come!” As it turned out, though, I’ve merely progressed from instant self-doubt to a more gradual self-doubt. That’s still progress, but I was dismayed to feel the self-doubt creeping back in, long minutes after the last of the color comments. It wasn’t just the fact of the self-doubt that bothered me, it was the quality of it; it felt so exactly like the self-doubt of a year ago; it was just as mortifying, just as wretchedly anxious-making. But I guess it wasn’t really the same. This time it came up more slowly, and only after several comments (rather than just one), and I felt more open to the possibility that there were other interpretations besides “I suck and everyone can tell.” I guess this is the work of undoing our knee-jerk reactions to things: the reaction is still there, but we diffuse it, hold it at a distance, offer up obstacles to slow the piercing into our hearts.

I also notice that this self-doubt comes up particularly strongly in certain company. There were about sixteen artists at this session, and I think seven of us were women. That’s almost half, but it didn’t feel like half, because the men talked more, and more loudly, and most loudly to each other.* Somehow, over the course of my life, I have been conditioned — either by my family or by general society, or both — to assume that men have more authority and validity, even when their qualifications are unknown to me. Earlier in the week I was reading this article, in which Stanford biologist Joan Roughgarden (previously Jonathan Roughgarden) says, “Men are assumed to be competent until proven otherwise, whereas a woman is assumed to be incompetent until she proves otherwise.” I’m convinced this is true, because I’ve internalized it so deeply in my own life. It is a terrible thing to admit, but when I see a woman in a drawing session, I tend to assume she is a hobbyist, whereas I assume the men are professional artists; I also assume that being paid for one’s art is more valid than doing it as a hobby. Likewise, when a female artist comments on my work, I tend to assume she is speaking from her individual experience, whereas when a male artist says something, I react as if he were an art instructor or critic — in other words, an expert. Of course I fight these assumptions, but still, they are my first assumptions, and I can’t check them all the time.

Additionally, I was the only nonwhite person in the room (or, to be more accurate, the only person who couldn’t pass for white). I don’t know how much this registered to everyone else — I was really surprised to learn, recently, just how much people’s notions differ on what constitutes diversity (though this goes a long way toward explaining tokenism) — but I certainly noticed, and wondered how that affected the way people saw me. I’m a sensitive and self-conscious person under any circumstances, but even more so when I feel visibly different from the rest of the group (as I observed while traveling). So being the only obvious POC in the room, being one of the less-represented gender, being new to the group, and being an untrained artist, I’m in a heightened state of potential self-consciousness and alienation.

I wrote not too long ago about the difference between systemic and individual oppression/prejudice. My self-consciousness here is a perfect example of how these two things collide. On the systemic level, there is patriarchy, there is sexism, there is racism (and “diet” racism!), there is a need for greater inclusion and representation, there are meaningful differences (that need to be acknowledged, if not changed) in the way men and women act and speak and are recognized in social groups, and so on into infinity. But on the individual level, in a group like this? Everyone has been welcoming and respectful, people remembered me from last time, and I didn’t notice that anyone else got more or less (or qualitatively different) comment on their work than I did. I like the group a lot. I plan to go again. I wouldn’t say they need to change anything. But I am so sensitive, in situations like this, not just because I am a neurotic person in general, but because I’m so aware of my vulnerability and (in)visibility vis-à-vis the systemic imbalances that are always present. Another way of putting it is that in company like this, it’s never only my artistic validity that I’m worried about, but everyone else’s ability to see me as a whole person rather than only a representative of my race, gender, age, or other quality that I would not choose to serve as my own self-definition.

By the way, this is completely not the post I thought I was going to write; I was just going to show you my latest drawings, but I guess all this was wanting very badly to come out. And that is fine. Sometimes people complain that other people make everything “about gender” or “about race,” as if there were a way for things to not be. Maybe, for some people, there is the illusion that one can escape these things, but it doesn’t take very many hurtful incidents for the rest of us to realize that these things will always be, for the rest of us, inescapable — and one reason for the inescapability is that we can’t fight what some people will not acknowledge to exist. So this is me, acknowledging one facet of my reality, in the hope that it may illuminate something for those of you for whom this reality seems far removed.

*Not that men can’t talk to each other, or that the men didn’t talk to women; I’ve found everyone at this meetup quite friendly, and many of the artists — men and women alike — have known each other for a long time. But it seems to be mostly men who call out to each other across the room, and therefore it’s their voices we hear in conversation, not the voices of a mixed-gender group. go back