After lululand responded to my September 2005 music tag (wow, way to live the adage “better late than never!”), how could I not respond when she tagged me?

1) Thank the person who tagged you.
Thank you, Lauren! 🙂

2) List five random/strange/weird things about you.
0. Considering how random, strange, and weird I am, this list is surprisingly difficult to compile.
1. My knees. 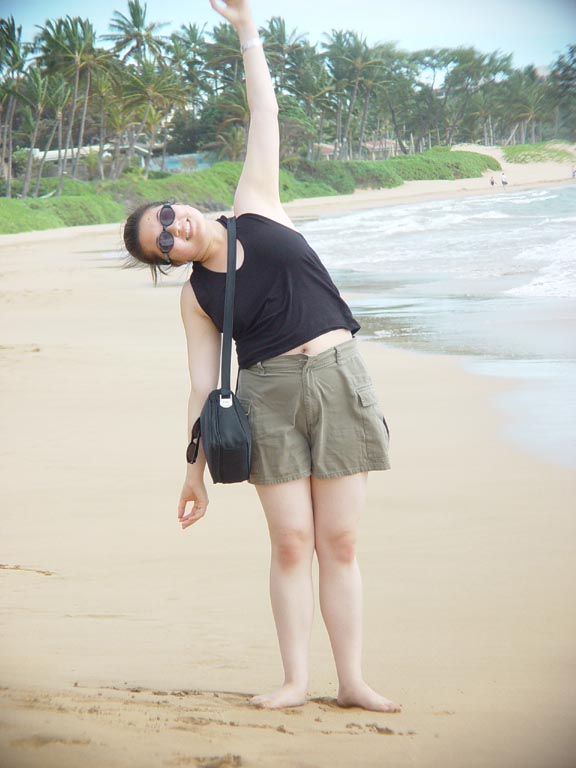 They hyperextend. Visually, what that means is while normal-people legs go straight down from the hips, my knees make mine fan out in an inverted V. (See photo. I don’t have any better ones because, due to my funny knees, I don’t wear shorts or skirts that reveal them.)
2. When I was in second grade, every time I thought of this one boy I had a crush on, I would sneeze. This has never happened with any of my crushes since.
3. I love mayonnaise and will eat it with just about anything that can’t be counted as dessert. (I know that in some people’s eyes this would instantly qualify me for Most Disgusting Person, were there such an award.) So, I’ll happily eat mayonnaise with carrot sticks, fried rice, or stirred into soup, but not with chocolate or fruit. Sure-fire way to get me ecstatic about a meal: accompany it with aïoli.
4. I have a tendency to idolize people I admire. After a while, this usually leads to a mildly shattering letdown, followed by reluctant acknowledgment of their humanity. Past idols: JK Rowling, Nigella Lawson, Erik, certain teachers.
5. Sometimes when I haven’t gotten enough sleep, I think my nose looks bigger in the morning. I have no idea what this says about either: (a) my physiognomy, or (b) my psychological health.

3) Tag five other people.
1. Jennifer
2. Daniel
3. Kiyomi
4. Wei-Ling, although she’s done a similar one in the past that I still want to someday do on my journal
5. Kevin, if he reads this!