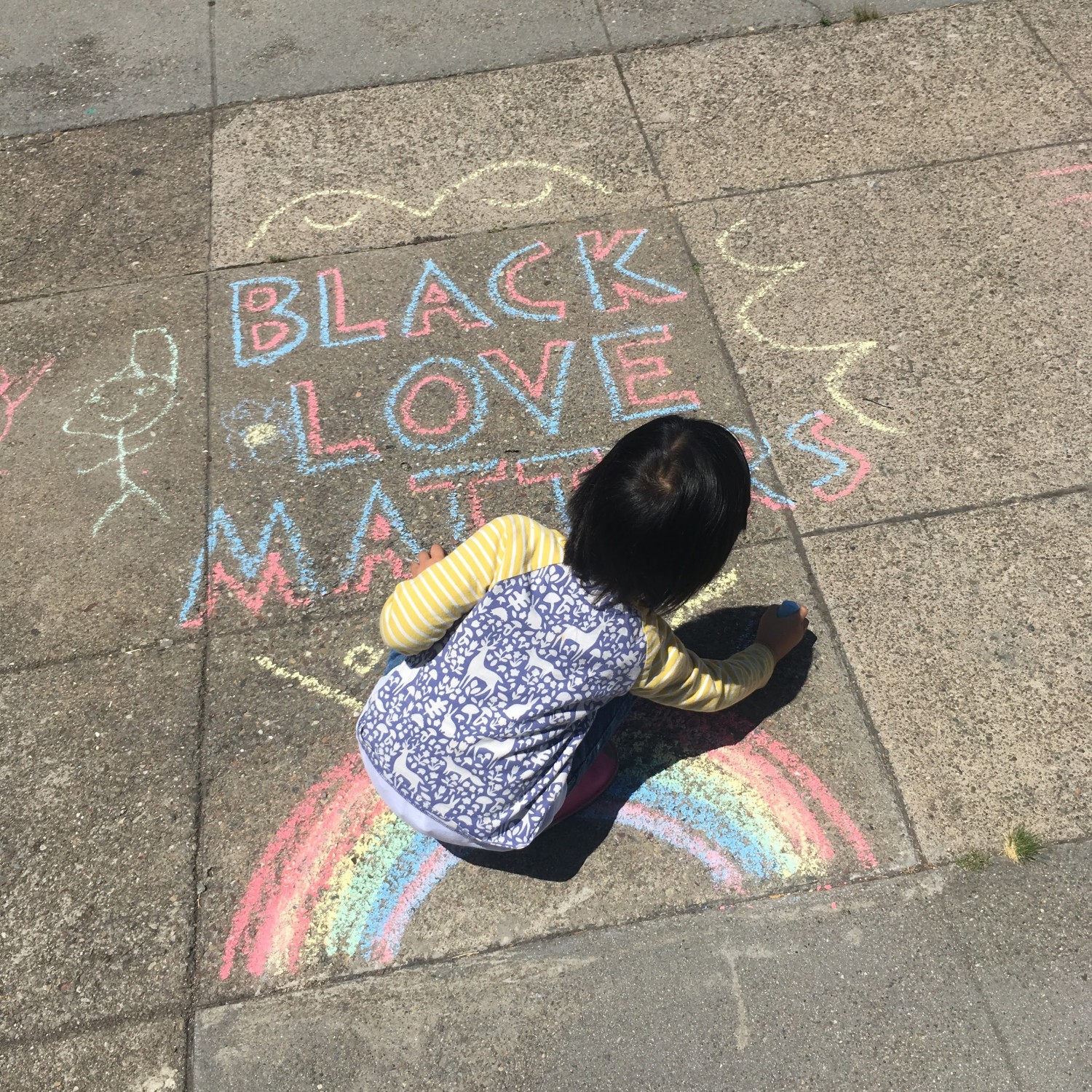 I didn’t write yesterday — first skipped day in a long time. I slept in, then listened to an audio version of a favorite book, played games, caught up on some preschool work. During the rest of the day I had my mending circle, ordered groceries, and meal-planned…

I had some envy and grief, yesterday, over what we’re not doing. E and I discussed whether to let Owl attend a distanced end-of-year ceremony, finally deciding against it. The whole end of this preschool year has been so anticlimactic and sad (for the parents and teachers, if not the kids!). And our new neighbors went over and hung out with our other neighbors in their yard. I could hear them blasting music and laughing and I so wanted to join, but it just didn’t feel safe without having explicit agreements in place, and we aren’t close enough for me to want to do that. But I felt so raw and achy around it— and I knew if I went downstairs I’d be invited to join them; I don’t know whether that makes it better or worse. I realize (thanks to some recent therapy work) that I’ve had this lifelong tension between the way I want to participate in the world versus what feels safe, and I’ve never known whether it’s truly others holding me back (like my parents when I was a child, or E now since he’s more cautious and introverted), or whether I’m letting them serve as a convenient excuse. I ended up spending the evening writing postcards to voters, and looking up children’s books to add to our collection, and posting all this to FB; that helped.

It’s strange that the thought of SiP going on for a year or more feels so close to unbearable when, after having Owl, I reminded myself that a year taken out of momentum is not very much in the grand scheme. I don’t quite know why that year-or-so feels so different in the context of the pandemic. Is it the uncertainty of the future we return to? Is it the closeness to mortality? Is it the fear that none of what we long for will still be there? Is it the collectiveness of this experience that is yet still fragmented, isolated?

I went to mail my postcards, ran into our neighbor who crossed the street to say hi and remark that I seem down, which: how can she tell, through my mask and sunglasses?! I struggled to articulate anything, not because I didn’t want to talk about it but really I didn’t know what to say. But that’s ok; she met me in that. She also reminded me that we got some good news today — meaning the Supreme Court ruling that LGBTQ+ people are protected under the civil rights act.

It’s true, I do feel down. A friend had to reschedule our regular meetup, I read a lot of news today, I spent some time writing to a company to demand more racial accountability, only to receive a real non-answer and I’m not sure whether I have the bandwidth to push them harder. Just nothing to look forward to right now, I guess, not even dance class, because last week the instructor made reference to her (white) fragility and I just don’t want to hear about it. No word from the friend I had such a good talk with last week, and that’s fine, but I’d just love to feel less lonely today. I should call J since she’s got the day off. And dance will help with endorphins even if it ends up being tweaky on race.

I did indeed feel better after dance yesterday, although I was the only POC and it did feel like the instructor was addressing her fellow white people and I did not enjoy that — I’m glad white people are self-examining but I don’t need to be around to witness it. I think it’s also an HSP thing, picking up on nuances of tone and demeanor that most people wouldn’t.

It’s so far a pretty quiet week which is very welcome, though that gives me more space to be sad and grieve what I can’t have.

I think what I need is to have some FUN. I did a lot of liberating, powerful, important work over the past few weeks but it wasn’t fun and it’s not over. So what can I do to find fun again?

Yesterday I ran a few car errands. It was nice to get out and drive, though a little scary as I don’t drive much anymore, and the roads are no longer as empty as they were at the beginning of the pandemic. Around the lake there was tons of activity, lots of people unmasked, food trucks, cars parked in the turn lane! I was simultaneously happy to see all that — Oakland is indomitable — and horrified.

I want to record that twice recently, very competent and organized people have remarked to me that they’ve experienced disproportionate difficulty with seemingly small tasks. One said it felt like a huge undertaking just to walk down the hall to take out the trash; the other said they were leaving texts or phone calls hanging because they just couldn’t bear responding, with the future of their small business up in the air. Meanwhile I just took out our own trash and recycling and it felt like a huge triumph (three trips up and down stairs).

Nobody is doing well!!

I really love SD and our weekly convos which always have the effect of moving things around my mind, and taking me very thoroughly out of my own head for awhile.

Yesterday was Juneteenth, which E’s employer had given everyone as a holiday — I didn’t realize there’s been a whole movement to make that happen. It felt very appropriate for the moment and I wonder whether MLK Day felt that way too, the first time.

E and I got to start the day with a date of sorts — a Scottish new-music ensemble performed a piece he composed. It was a very special concert, very intimate: the composers speaking about their pieces from their homes, the performers also in their homes, the new music from this moment, the solo instruments (some of which, like bass clarinet or snare drum, we don’t get to hear so often in solo). It was lovely to share it with E, and with friends and family who had also tuned in, and talk to E about his process and celebrate with him that his first public premiere is with a well-regarded international group. He and I used to connect so much as musicians and artists and it was great to do so again, even if briefly, and reflect with gladness on this being possible even 4 years into parenthood.

In the evening E and I mentioned how I’ve always found him a bit opaque and how that probably keeps things interesting. He said, riffing on a convo we’d had earlier in the day, that I need someone who’s a Sunday [crossword] puzzle.

I’m going to take Owl outside today to chalk protest messages on our sidewalk. It’s such a harmless activity but it takes on a little more edge because yesterday H, who came up with the idea, was in her own neighborhood in Berkeley putting up signs about it, when a white man yelled racist insults at her — and she pregnant and with her two little kids in tow. She took video and it made the news.

After talking to AV I realize I’ve been super stressed about being preschool president and have not been admitting that stress to myself. I’ve been trying to be what I’m not (highly prepared and experienced, knowing everything already). I need to name that. The place of greatest strength is to know exactly where I am — no one can take that from me. I’ll grow, and learn, and do better, but I don’t need to pretend I’m already there.

It was really good to do the chalk action with Owl. It was good to be outside, with TY&AX joining us (distantly) later. It occurs to me that we’d probably have more interactions and more of a sense of community if we would only spend more time out in the yard… but doing so bores me, honestly; it was so much nicer with another adult there to talk to.

I kind of held my breath and prepared to stand my ground whenever anyone walked by, but nothing happened except J from next door brought us a bag of plums from their tree, which I shared with T.

I’ve been so very tired this week, and I haven’t exercised quite as much, and those things feed each other; I don’t exercise when I’m tired but not exercising makes me more tired.

Sending loving thoughts to those in toxic workplaces.