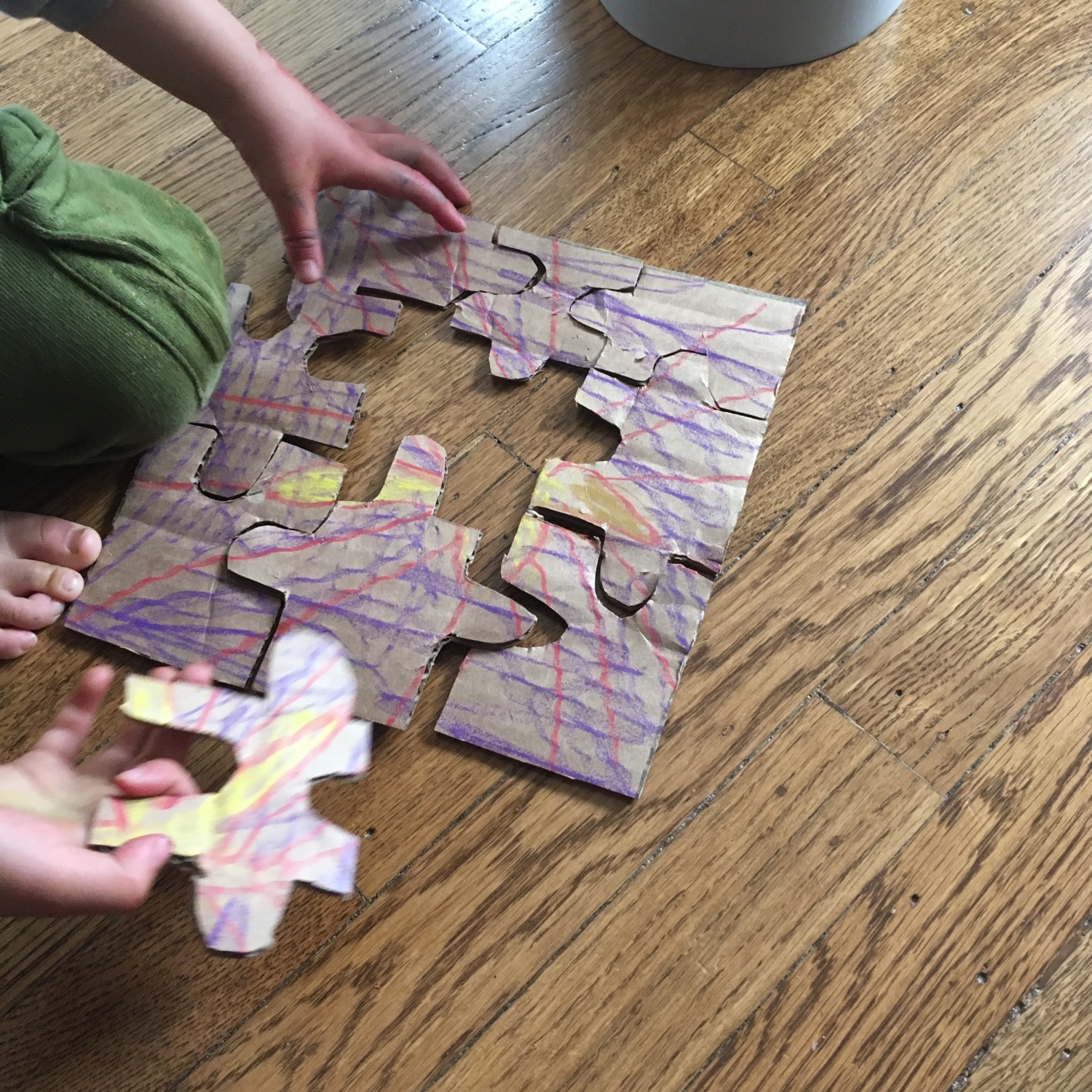 I’m filling this in on Day 4 because I had no time to write yesterday. I started the day with digestive upset and although it got better it didn’t really go away all day.

Six CA counties (including ours) have declared mandatory shelter-in-place

In the morning Kindred Accelerator ran a creative healing intervention over Zoom and it was so beautiful and connective and affirming; it set a nice tone for the start of all of this; also it helped me check in (then and afterward) with several friends.

My regular listening call with R was much needed and I spent all 20 minutes talking about the pandemic even though I didn’t intend to.

I also checked in briefly and in our usual fashion with individual friends and groups.

I had a short video chat with the parents.

E talked to his brother [a neurologist] on the phone.

I definitely needed/wanted more support in the afternoon, but I got by: making puzzles with Owl out of cardboard or paper, letting them watch PJ Masks in Mandarin, getting my hopes up for the Met Opera’s stream of Carmen (it didn’t work), taking a lot of time with the noise-canceling headphones including 20 min where I explicitly told Owl I wasn’t available (they still interrupted me several times, but I was glad I’d set that limit). Then when E was done at 5, I vegged out for a bit and then walked to take out mail and then did half an hour of a live-streamed barre class.

I gave in after/during dinner and read all the WaPo COVID-19 coverage and that was ok for one night but I don’t want to make it a habit.

I intended to power off and get to bed at 9 (instead of 11 like the night before) but though I did manage to get off social media and games by 9ish, I again stayed up. But this time I did the thing I had meant to do the night before: laying out a general schedule/routine for these next weeks — guessing about my pain points, reading other people’s advice and proposed schedules — to try and combat cabin fever and overstimulation and days bleeding into each other.

E did almost all the cooking and kitchen chores today and that helped a lot though we both felt it was unsustainable (I would have done more if I hadn’t had stomach upset).

There’s still a sense of intense anger and stress from friends in places with less stringent restrictions, and a lot of uncertainty (one family is on holiday in NZ and has decided to shelter in place in their rented house). An astounding number of parents are doing pretty intense homeschooling, and when I went on the avenue to send the mail there were far fewer people and far less eye contact (I only got one smile) but no one seemed to be really trying to keep 6’ away from each other.

I should post my journal entries on my blog or on FB, including that I feel so privileged to even have time and equanimity to reflect and write, when I know this is a much more desperate situation for so many people.

Perhaps I should also include in my posts my theme of the week (one of the things I’m doing to try to prevent the weeks from bleeding into each other), and end them with a lovingkindness practice.

Sending love and tenderness to all medical workers, and to those whose incomes are hard hit by the restrictions.