I’ve been trying to write this post for weeks, but it was hard to figure out how to make it coherent when there’s no one big thing to write about. A part of me wanted to just skip the writing and wait until there was something more momentous to report, but the rest of me said no, this is exactly the kind of time I want to document. Owl is changing every day. By the time she is the age my nephew is now (they’re 8 months apart), I’ll scarcely remember any specifics from this stage of her babyhood, except for what I preserve here. But capturing the feeling of a time, beyond just stream-of-consciousness, requires a higher level of thinking than what I’m capable of on most days!

I would say that 90-95% of the time, things are good, and I know how lucky I am to be able to say that. Owl is a trick baby who sleeps anywhere from 7-11 hours a night (the 11 hours only happened once, but still, it was amazing). She’s feeding and growing beautifully, and she’s learning how to laugh. I’m getting more exercise, and so is Erik — sometimes together, sometimes not. We sometimes manage to cook, and the apartment almost looks presentable — when we put in the effort, which isn’t often. I’ve given away the big bag of extra postpartum supplies that have been gathering dust in a corner. We successfully spent a weekend at my parents’ house an hour away. And Erik still has five more weeks of leave, for which I’m very thankful as it often feels like there’s only one fully functioning brain between the two of us! (The other day I was buying egg tarts and somehow I thought 14 times 75¢ would be around $15. Sigh.)

Owl checking out a wall at Erik’s parents’ house

It’s the pitiful brainpower that can be most limiting, these days. (I just wrote “It’s the pitifully limited brainpower that can be most limiting,” and almost didn’t notice the repetition. You see?) My continued physical recovery, too — it’s going well, but after so many weeks of minimal activity, I move forward only by inches, not by feet or — as I would wish — yards. Even when everything is going smoothly, every little task, whether mental or physical, seems to require such a marshaling of resources. Any one thing I choose to do saps the energy that I’ll need for getting other things done, later.

For example: figuring out dinner. Erik and I are both good, improvisatory cooks. We also live near many restaurants, a bakery, and several grocery stores, and there are several food-delivery apps on my tablet. It shouldn’t require that much effort to get us fed every day, yet somehow, every time we do, it’s like clearing a high hurdle. What was once a single item on the day’s agenda — dinner — is now a drawn-out set of steps, none of which can be taken for granted:

I’m still constantly startled at how much it takes out of me to get through these should-be-simple tasks. And then I feel ashamed, because my life is so much more comfortable than most. But guilt is not productive (if it were, I’d be running marathons in no time). And that’s just dinner, which is necessary for bodily survival, unlike seeing a friend or writing a blog post (which are helpful for emotional survival). There are so many things I want to get done every day, but practically speaking, if I can do three, that’s already wonderful. Yesterday I did Pilates and washed dishes and tidied the bedroom and had a shower, and I was able to do all that because Erik tended Owl almost every moment I wasn’t nursing her, and we ordered dinner. And still we let the dinner dishes sit until morning.

One way to take care of dinner: go out, and order enough for leftovers! 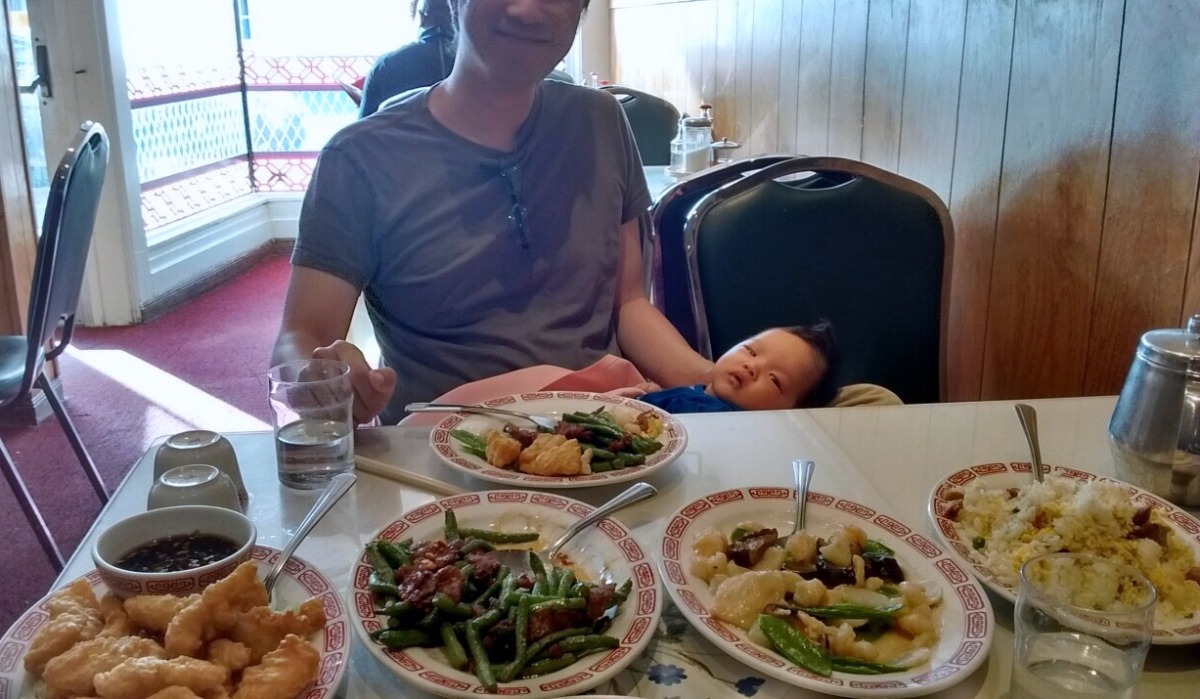 Resuming a normal-ish life feels a bit like relearning movement after an injury. For most of us adults, there are certain basic tasks that are usually straightforward and seamless: getting a bowl down from a cupboard, pulling a shirt over our head, walking across the street, going up and down stairs, drying ourselves off after a shower, transferring a pot of soup from the stove to the fridge. We do these kinds of actions dozens of times a day, without thought — until we get hurt, and then all of a sudden these organic movements become maddeningly long series of tiny motions that don’t feel good or easy anymore. Our fingers won’t grip tightly, or our legs shake, or we can’t lift our arms anymore, or twist, or stretch. We’re no longer certain that our feet will land where we want them to, or our backs support us, or a hip bend without pain. If we’re lucky, we see good doctors and physical therapists and sooner or later we return to something like normal, but the transition can be rough. On the other hand, every little accomplishment can feel like a victory. That’s what it’s like 95% of the time: things are good, if slower and more laborious than I’m used to. Things are good and the rewards are obvious.

The other 5%, though… that other 5% of the time is when I lose my equanimity. Times like this Wednesday afternoon, when I took Owl out in the stroller to run some errands while Erik had a much-needed nap. I went to the library, the post office, the drugstore, and the grocery; it’s a round-trip circuit of exactly 1 mile. It should have been fine. But. Pushing the stroller was tiring, maybe because I’d had a long walk the day before (3 miles around the lake). The sun came out and I felt overwarm, but I didn’t have my water bottle. Once home, instead of calling Erik to come down and help me, I decided to do it myself — get the stroller and carrier back into the car (it’s a multi-part system and we store it in the car), and take Owl and my groceries up the stairs — in spite of my recent back pain, in spite of never before having unloaded the stroller system alone nor carried Owl up the stairs. Inside, I started feeling my back a little as I put down the bag of groceries and walked into the bedroom to grab the bouncer so I could put Owl down safely. I wanted to wash my hands, drink some water, cool off, and put away the groceries, but I also had to change her diaper, and before I got a chance to do any of the other things she got hungry and began to fuss. Since I couldn’t feed her lying down without waking Erik, I tried to feed her sitting up — which I have done just fine many times now — and it didn’t work. I was weary, overheated, thirsty, aching all over, and trying to shove my boob into an increasingly desperately crying little mouth. In the moment it felt as if I couldn’t do a thing for Owl and I couldn’t do anything for myself either. Erik was of course awake by this point, so I carried Owl into the bedroom to ask for help. I felt like a failure — at parenting, at partnering, at adulting? All of the above maybe? All the ease of the other 95% of the time felt like a sham; I was convinced that I’m useless as a parent and the only reason anything works at all is that Erik is still here, and so whatever am I going to do when he returns to work in five weeks? I handed Owl over to Erik and though I tried not to, I cried.

I am learning, even after just two and a half months of parenthood, that having a child doesn’t just require patience and compassion with her, but with myself. Even with a mellow baby like Owl, I’ve cried so many times out of sheer frustration that things aren’t happening the way I think they ought to — that I am not as I ought to be. All my old fears and insecurities come to the fore: I’m a failure, I don’t measure up to everyone else, I’m a spoiled and lazy person who doesn’t know the meaning of real work, I’m weak and dependent, Erik resents my dependence, etc. Most of the time — 90-95% — I know that’s not true, and I’m proud of myself and of what I’ve learned and achieved, and I know I’m capable. But it’s during that other 5% when I need all of the patience and kindness I can muster; indeed, I need more than I can muster by myself, which is another reason Erik is such a help. Those are the times when I forget how to tell myself that it’s okay, that I’m okay, that I have come so far and that I don’t need to compare myself to anyone else (real or imagined), that I’ll get through this, that I’m doing so well.

I always thought, before I had Owl, that it was only circumstance that drove new parents into meltdowns — times when the baby wouldn’t stop screaming and you’d been up two straight nights in a row and you’d dropped your dinner and everything was a nightmare. I think I had forgotten one of the big lessons of our travels, which is that even when life runs smoothly, the biggest challenges are so often in our heads. I would never be as meanly critical of another new parent as I am of myself. I hope these 5% times will teach me how to extend to myself all the love and compassion I readily offer to others. 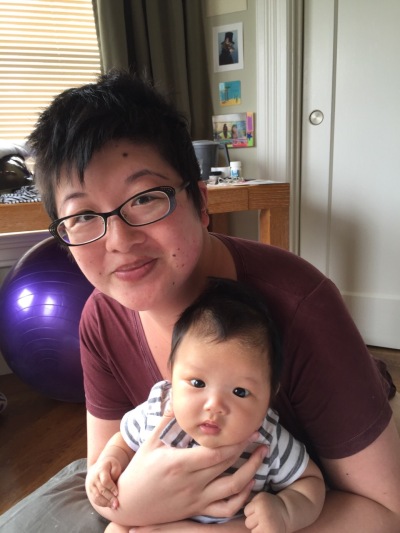