I feel ever bigger and more tired.

I still don’t actually look that big, comparatively; there was a woman in my prenatal yoga class, yesterday, who was at 28 or 29 weeks and she looked so much more pregnant than I do. But Pudding (and my belly) are growing every week and I’m feeling the strain. As I said in yoga during our check-in (one of my favorite parts of class, where we go down the line of mats and everyone introduces themselves and says how far along they are and how they’re feeling): nothing hurts that badly but there is always something that hurts. My left hip will ache, or I’ll be tingly in my feet and legs and arms. I’ll have mild abdominal cramps that may be digestive, although my uterus is supposed to be doing practice contractions and I’m still not sure what those are supposed to feel like. Gas is almost unbelievably painful — not that the pain is unbelievable but that I can’t believe something as normal as gas can cause that much discomfort. Some days I’m headachy, some days I’m just incredibly fatigued. But those in-between moments, when everything feels fine? Not so many of those now.

It reminds me of my first trimester, where even when I felt better there was still a kind of haze: of dizziness, or nausea, or tiredness. I was talking to my sister about this and she said she felt her third-trimester fatigue was different from her first-trimester fatigue, though she couldn’t say why. I feel the same, and I can’t explain it either. But there is a different quality to it. Perhaps it’s like early morning light versus late evening light; all my life I have never been able to establish to my satisfaction whether they really do feel different or whether it’s just that I know they are. In pictures they often look the same.

Indeed, I’m experiencing a resurgence of some of my earliest symptoms. A little tendency to motion sickness (fortunately not anything as bad as before): last week, at childbirth preparation class, I had to swap seats with Erik because the rocking chair was making me dizzy. A slackening of my appetite, coupled with the kind of mild reflux that leaves an unappealing taste in my mouth nearly always. And the need, sometimes, to simply lie down and rest. The other day I was making gyoza and when I unwrapped the ground pork some of the juices spilled out onto the floor. I squatted to clean that up and afterward I was panting as if I’d just run a couple of miles. Then I stirred the gyoza filling a bit, and was supposed to put salted cabbage into a kitchen towel and wring it out (to extract moisture and keep the filling from being too watery). It was a lot more work to wring the towel than I’d thought it would be and at one point I got a strange, subtle, instinctive feeling so I put the towel down on the counter and said to Erik (who had just come in), “I have to stop.” I was light-headed. I went across to the sofette and lay down with my feet up. I had to stay there for quite some time. I thought of my second-trimester afternoons making recipe after recipe and realized those days are definitely over. I hope it’s not going to be like the first trimester, when I relied on takeout and packaged foods, but if that’s what it takes, fine. (Erik would help more — he made dinner last night, a lovely simple soup of spareribs and many vegetables — but he is super busy at work, trying to get all the ducks in a row before his leave.) I did not like that sudden sensation of utter weakness and it cannot be good for Pudding either. She pummeled me after I lay down, briefly but fiercely, as if to drive home the message: don’t do this to us anymore.

resting with my sister’s cat, Manapua

Meanwhile, I am constantly aware of the passage of time. As far as my own comfort, the idea of sitting here getting bigger and heavier and more tired for two more months is daunting. I have mostly avoided buying specialty items during pregnancy but yesterday I gave up and bought, from the yoga studio after class, an exercise ball and an extremely beautiful (and rather expensive) bolster. It hasn’t even been twenty-four hours and I’ve already been very glad for both. My body wants support.

At the same time, as far as Pudding is concerned, I feel hyper-aware that I have only eight-ish more weeks to go; the same duration of time that stretches out so long for myself seems likely to fly by when it comes to preparing for a newborn! I’ve been doing research and making lists and yesterday I placed my first Amazon order for actual “nursery” items. Nothing big or complicated, just a pair of nail scissors and two portable changing mats, plus nursing bras and pads for me. But it was the first time I have had to sift through listing after listing for things with cutesy names and cutesy pastel prints. I don’t consider that we are true minimalists but I think, maybe, compared to our fellow US Americans, we might qualify. Sometimes I run across articles or blogs claiming to have advice on “the minimalist nursery” or “raising a baby in a small space” and I’m always scandalized at the abyss between their concept and mine! And it’s not just that I want few things, but that I dislike visual clutter (after all, I take labels off of jars and bottles!), so I balk at all these baby products being covered in high-contrast patterns and little pictures of animals. Maybe the realities of new parenting will force me to eat my words and you will find me a year later in a three-bedroom house with an upstairs changing table and a downstairs one (many people seem to recommend this), a fully kitted-out diaper bag with matching accessories, a crib decked out in toys that all sing and have flashing lights… but I hope not. I hope not. 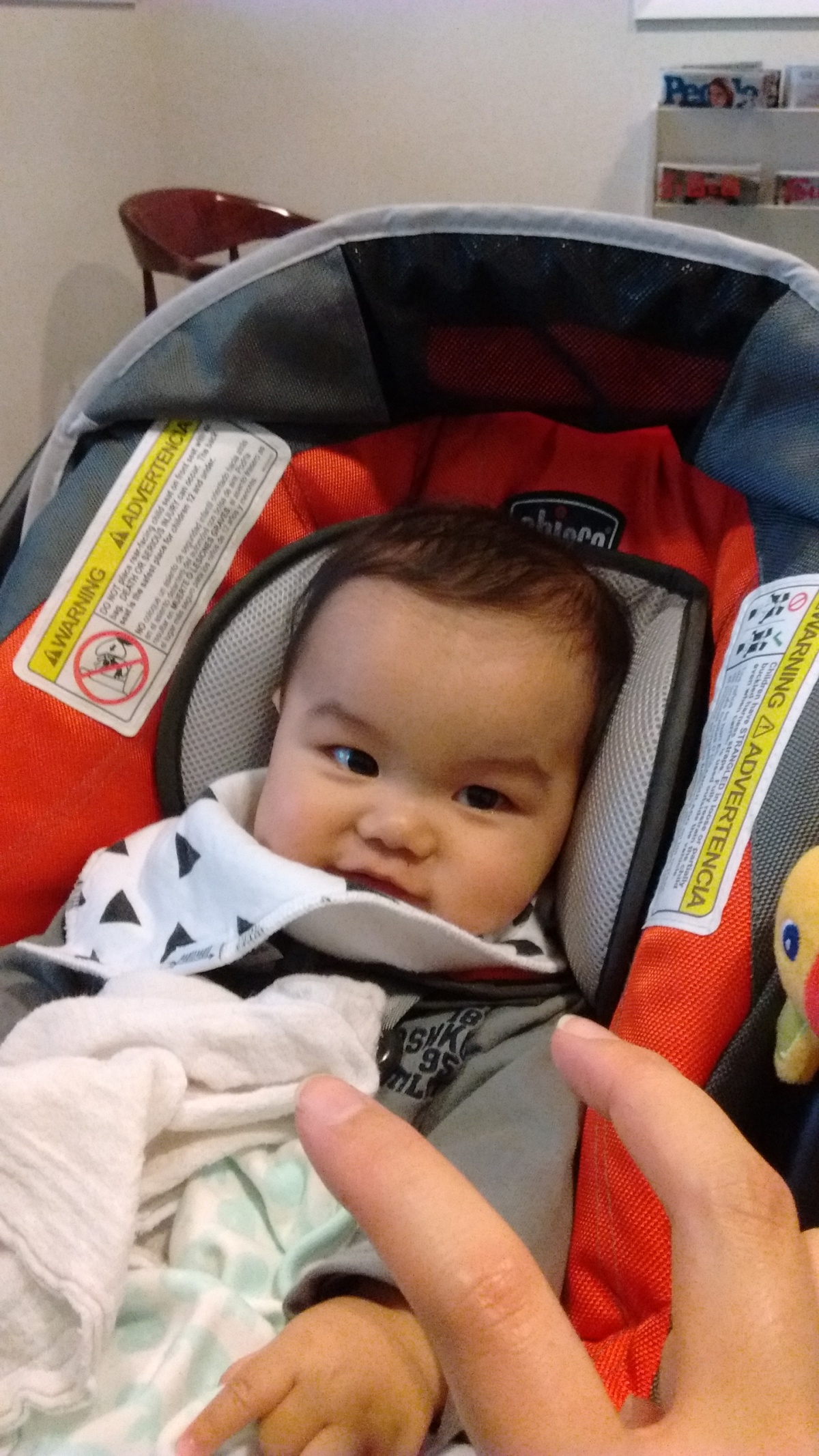 And a pic of my nephew Teddy, because he’s adorable. I entertained him during his mom’s dentist appointment last week and he was an absolute angel the entire time.