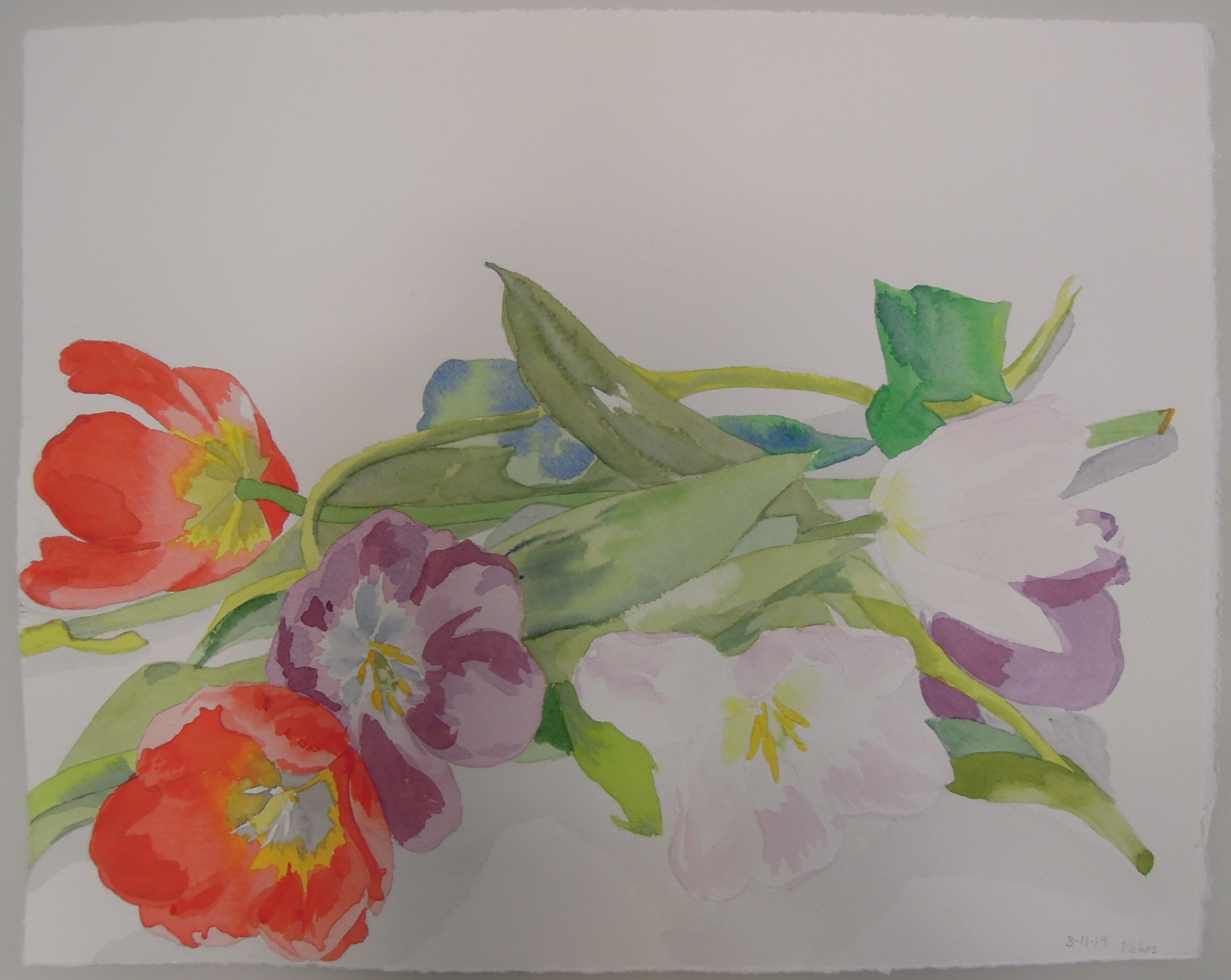 Is this March?! I’m wearing a tank top and my face is still red from my 1.5 mile walk to pick up our first meat CSA box.* Granted, part of the walk was uphill, but still… my goodness!

On the other hand, on the back deck, it’s breezy and shaded enough for comfort, so that’s where I’m writing this post. After my last post I found a vintage outdoor chair on Craigslist, and I love it! As the former owner pointed out, the chair both swivels and rocks. Excellent.

I am here, right now:

My parents came to visit last week, and my mom brought me three bunches of tulips! I didn’t have a vase big enough for them, so I stuck them in the stainless-steel bowl that came with my stand mixer, and they looked surprisingly nice. But within days they were wilting like crazy, their parabola-like shapes resembling the paper flowers I made for the wall. I knew I wasn’t going to have time to paint them while they were fresh, but Erik said, “You should paint them anyway. It’ll be a fun contrast.”

The tulips’ floppiness made me want to use a thinner paper, so I pulled out some Japanese paper I’d bought in Tampa. I had thought it would be like the wonderful Japanese paper I found in Berkeley a few years ago — the one that enabled such delicate, luminous herb paintings — but it turned out it wasn’t. I tried a few different things, but I just couldn’t get the precision of line I was hoping for. 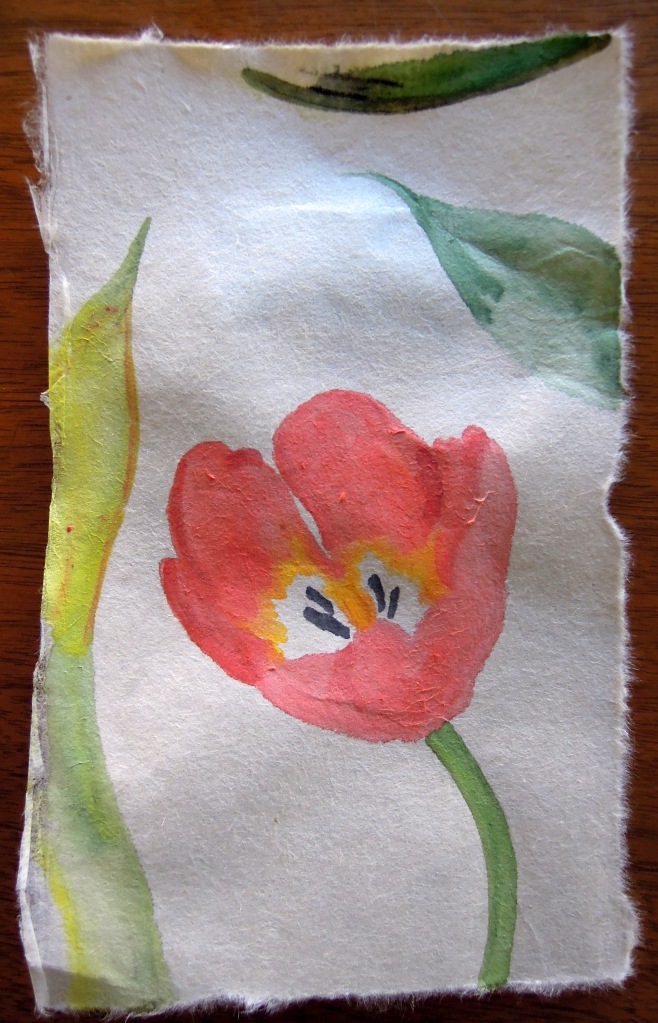 I made two small practice sketches on the Japanese paper, and then returned to my usual heavier watercolor paper for the bigger painting. I removed a half-dozen tulips from the mixing bowl, arranged them on the table, made a pencil sketch, and then began painting. I wanted something that sort of evoked old botanical prints, without actually looking so stiff and diagram-esque. I got through the two red tulips before we had to leave to pick up the outdoor chair, and by the time we came back, the sun was going. So I finished everything else in different light. Not a very painterly thing to do, but I still like my fallen tulips.

They’re not at all botanical-print-y, as it turns out.

My floral gallery wall is expanding. You can see the little Japanese-paper sketches are much smaller than the rest.

I received a brilliant letter today from my friend Sarah. She has also had experience with being somewhat nomadic, and she mused that arriving at a new place in the US can be almost more unsettling than living abroad: there, we don’t expect to fit in, but here, we think we should. That’s just exactly how I’ve been feeling since we came here. I think I forgot, when we decided to come back to the Bay Area, that things would have changed since we left (friends have moved away, we’re in a different city, the social/cultural landscape has altered somewhat) — and even if I had thought of that, I might not have realized it would discomfit me so much. It’s not that I walk around feeling awful all the time, but more that I’ve been the kind of self-conscious that characterized so many of my first weeks in foreign countries, and I really didn’t see that coming. But it’s getting better, the longer we are here (just as it did in any new place).

I wasn’t going to write about this, because I don’t have that much to say about it, but I thought I should. I remember things better when I’ve written about them publicly, and it feels important to record that I felt this way. Otherwise I might only remember how much we love this apartment and neighborhood, and forget that I came into it just as awkward and nervous as I was everywhere else.

I leave you with Lyapa. Yes, she sleeps like this. Quite often, actually. And frequently she snores.

*We’ve had a produce CSA box for years, and absolutely love it. Before we started traveling, we got our box every other week, but now we’re doing it every week, so I guess that means we’re cooking more veggies these days. In Boston we tried out a seafood CSA but it turned out to be no better than the fish we could buy at the farmers’ market there. This will be our first experience with a meat CSA.