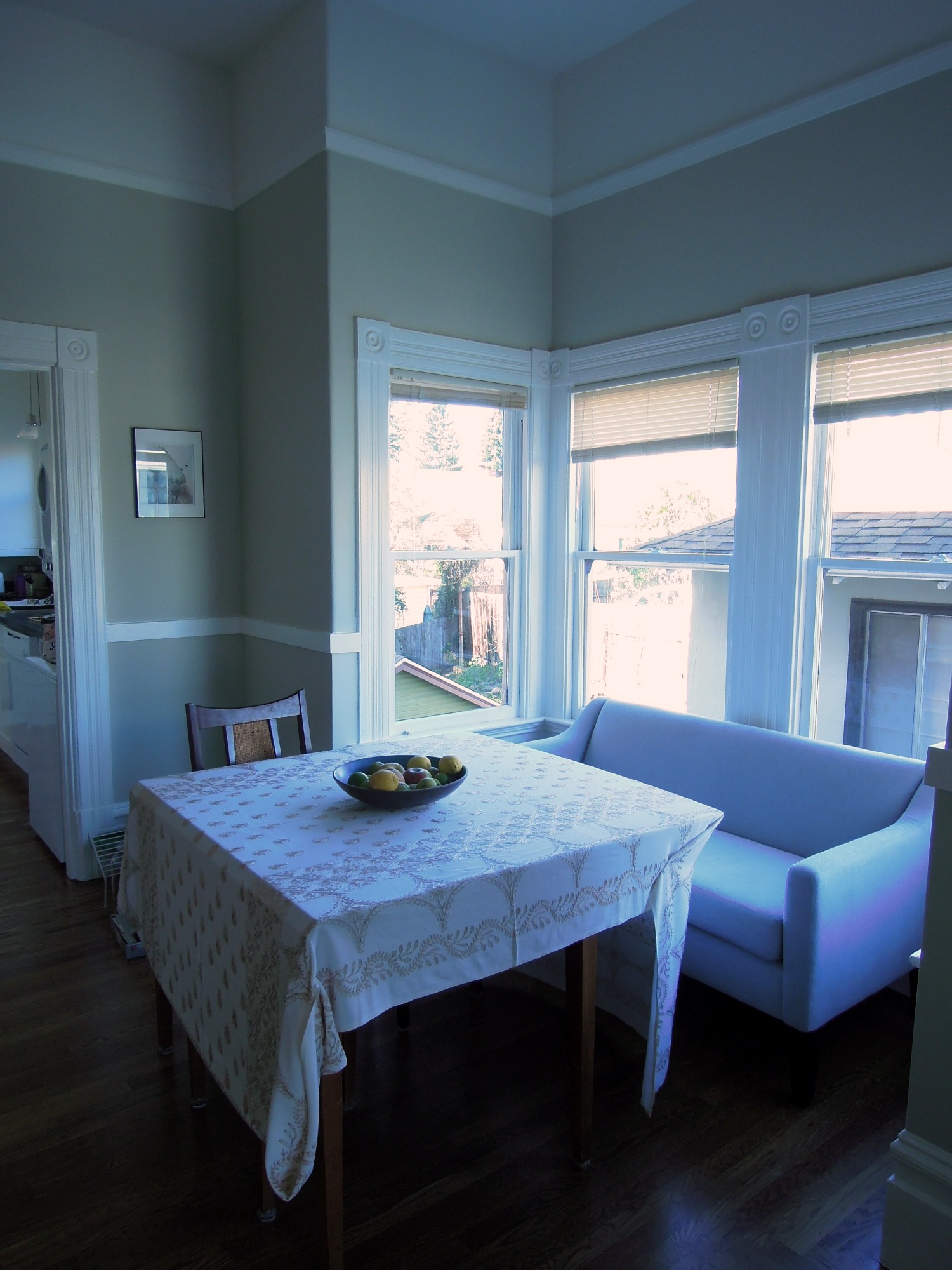 We’re now moved into the Oakland apartment. We don’t yet have internet installed, so I write this from our new “office”: a tiny, one-roomed branch of the public library, conveniently located just across the street. It’s a bit of a hipster branch (there’s a terrarium next to me at the window table)(although to be honest, the plants in it don’t seem to be doing all that well), but it’s also next door to the local elementary school, so there’s a definite community feel, too. Erik works from Starbucks when the library is closed, but I mostly forego wifi during those times, and am surprised by how much I like this. I’m a lot more productive, and I feel less distracted as well. I realized today that it’s not just the instant-gratification, all-things-at-your-fingertips promise of the internet that’s so boggling, but the temptation to multitask constantly, with a dozen browser tabs open. Perhaps we do get more done that way, but certainly at the expense of mental clarity.

Moving has been quick and painless, because the apartment is little, and because we gave away so many of our things before we started our travels. Most particularly, we brought in almost no furniture, just the dining table and my desk, a few chairs, and a borrowed airbed. A couple of trips with my parents’ minivan, a couple of trips in our Accord, and we were all moved in. We did this over several days; my mom calls this (in Mandarin) “mayi banjia,” literally, “the ants move,” referring to the procession-like carrying of many small bundles rather than a lesser number of big ones! We’ve since been acquiring more items, however: a small sofa (West Elm calls it a sofette) via Craigslist, a dining chair from an estate sale. 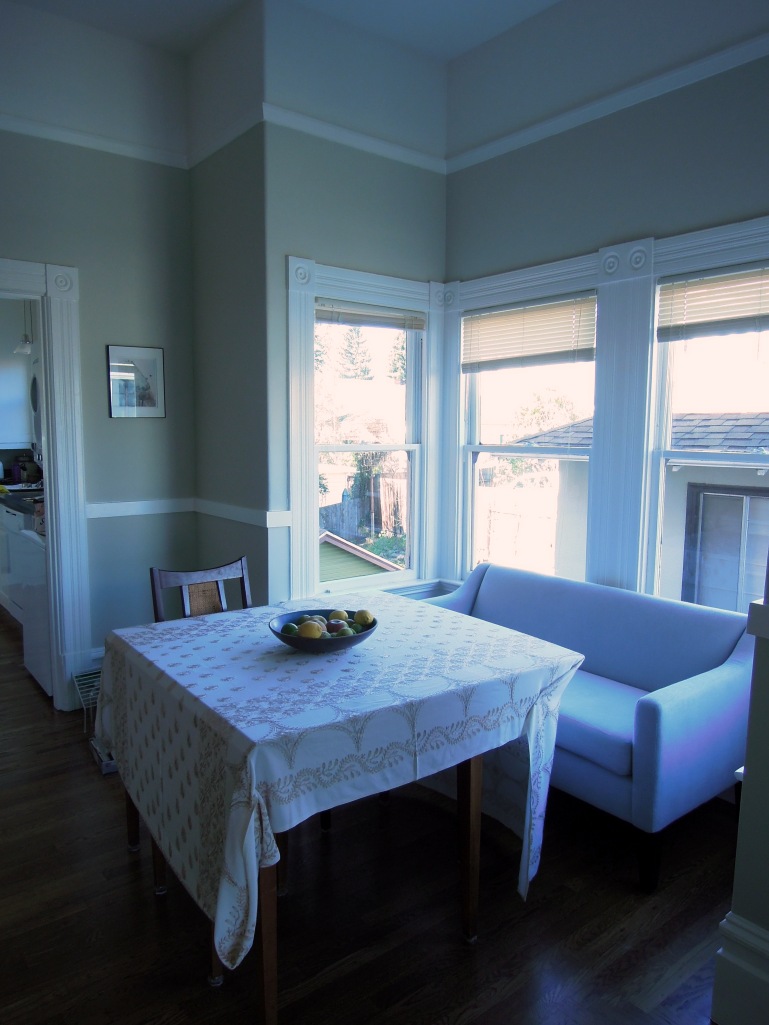 Prior to our actual move-in I was nesting so furiously — I had the furniture section of Craigslist on the virtual equivalent of an IV drip — that Erik said I was trying to make up for two years’ worth of missed homemaking. I had a sense that we needed to get the place set up rightnow, I think mostly because it’s so small that I felt I had to prove we hadn’t made a mistake by renting it. (When I mentioned this to Erik he looked very surprised and declared, “We haven’t made a mistake.” I know that, but there was still a feeling of urgency.) But after we got the sofette, and some foofier pillows (to combat the camping-ish feel of the airbed), I felt much better, and since then I’ve been taking it slower.

Actually, it’s rather nice not to have too much stuff. As I wrote in my last post, I’ve been rethinking what we need, and so, besides not bringing in too much stuff in the first place, I’ve also set up a couple of storage bins which I’ve dubbed “the bins of decision.” I put all nonessential kitchen things in there (e.g., all our food-storage containers, the spare cutting board, serving plates) and only take them out as I use them, the idea being that in a couple of months, anything still in the bins will be donated. To that same end, in our clothes closet, I’ve put all the hangers backwards on the bar, and stacked the folded clothes upside-down, so it’ll be easy to see there, too, what I haven’t used. I’ve discovered that it’s easier to start with less and add things as we need, rather than to begin with a full house and then try to take away. With the latter method I get too attached to what’s already there, whereas with the former, I usually find that I don’t miss the items I’ve removed. Moreover, there’s the additional motivator of already having a streamlined home, reminding me that anything I add will be taking away from that luscious sense of spaciousness.

Fun fact: while I was editing the photos for this post, Tracy Chapman’s “Mountains O’Things” came on my playlist. The lyrics are perfect:

In trying to simplify our life, it’s not just the amount of stuff I’m trying to minimize. I’ve pared down our cleaning routine — and cleaning is easy when we have less stuff to clean, and clean around — and I’ve also reduced visual clutter by removing as many product labels as possible. That sounds nitpicky, but I started doing it in Boston, and it really does make things more restful. I’ve actually begun selecting products based partly on ease of label removal; fortunately, most of our favorite products have unsticky label adhesive! 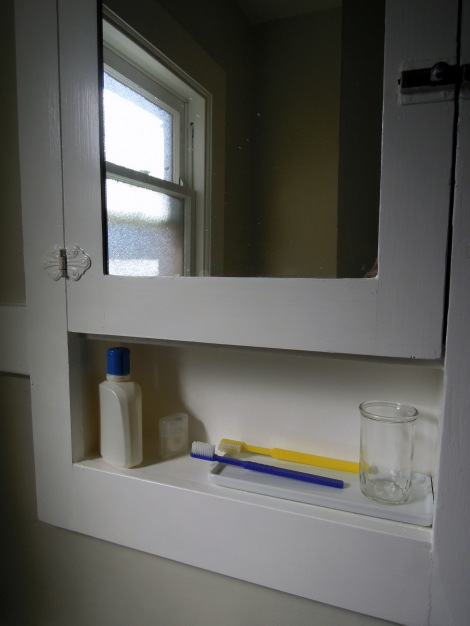 I figure that just because I’ve bought a product, doesn’t mean I owe the company advertising space in my home; also, it’s pleasant not to have all those logos and that label copy to read. (Maybe this isn’t a problem for everyone, but I have always been an inveterate reader. If a thing has words on it, I will read them — but why should I reread the DeCecco name on my pasta every time I open my pantry door?!) A nice benefit of this habit is I pay more attention to the form of containers, which I’m sure would please the industrial designers who develop these bottles and jars! 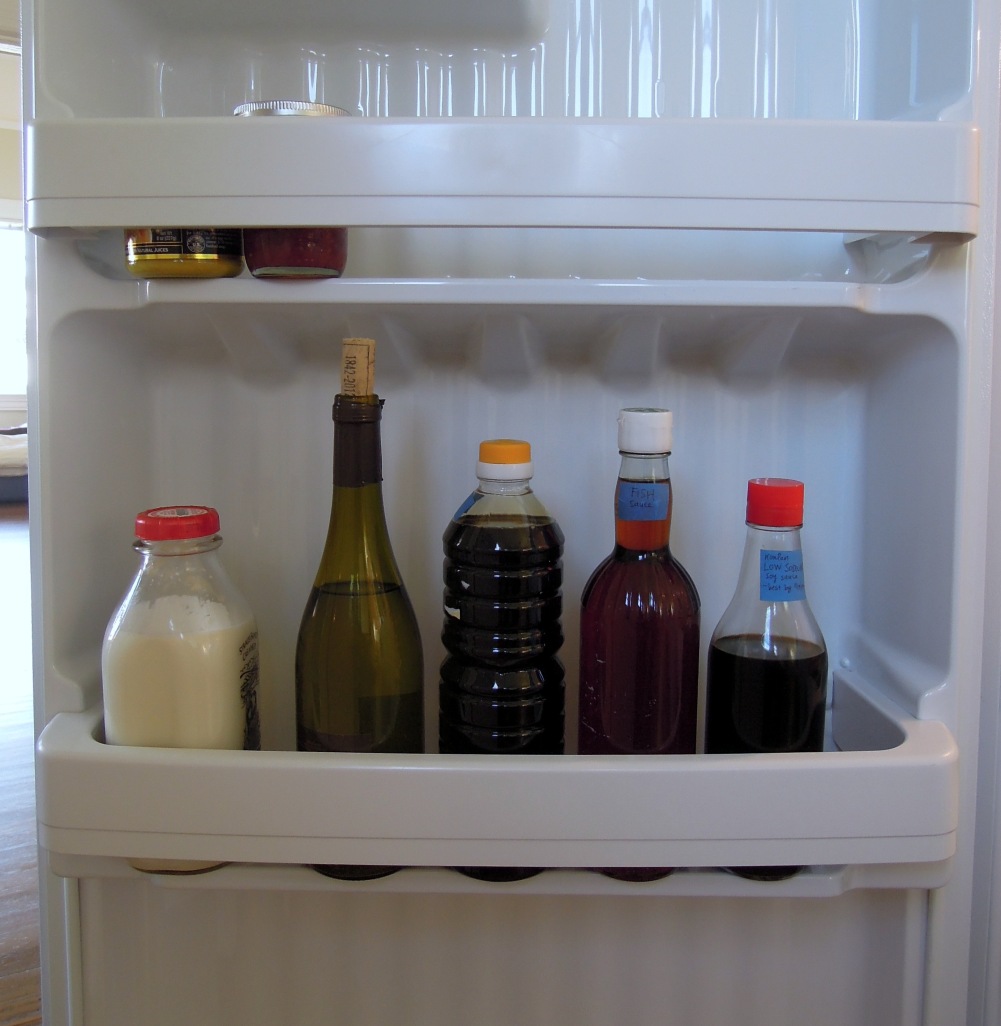 I’ll post more photos as we get the apartment more settled/decorated. We’re getting a bed possibly this weekend, and I’m working on painting/building a 3D adornment for a particular wall — I can’t wait to show you when it’s done.

For now, here’s one more photo, showing the view from my desk and the single decoration I’ve put up next to it, an envelope with a drawing from my friend Tamara (aka tamgerines, and also the one who introduced me to the label-removing trick): 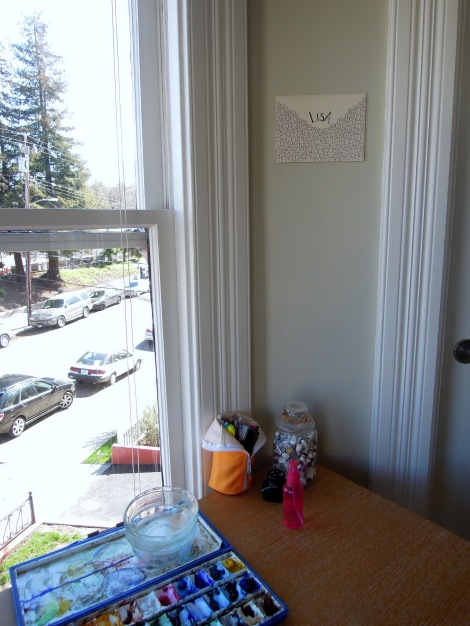