If you haven’t kept up with this project, here’s a quick summary: I did the first 12 paintings all on the same big sheet of paper. Those were all fairly realistic still lifes. For the second sheet of paper, I’m doing more free/abstract reworkings of all the paintings from the first sheet. The idea is that since the first sheet gave me practice in rendering objects accurately from life, the second sheet will be practice in painting freely, without so much care for the way things really look.

This revision was a bit of a challenge, since I consider the original painting something of a failure. Not a failure as in “this has no worth,” but it doesn’t excite me as some of its predecessors do; when I look at it, I have no feelings beyond “this didn’t go the way I’d hoped.” Without that excitement, I wasn’t sure what to go on with the reworking.

Then I decided I might as well play off the failed aspects themselves, particularly the way the noodles came out looking so wiry and stiff. So, working quite quickly, I made nine new “noodles” that intersected with each other at right angles, colors mingling in places.

It took a very short time, maybe 10 minutes, and it’s so simple that to me it barely qualifies as a painting — it’s more of a doodle. The only thing that makes it a “painting” in my mind is the thought process that went into the reworking. I feel it looks insane — compared to the other pieces — but that incongruity makes me smile when I look at it.

And the full sheets: 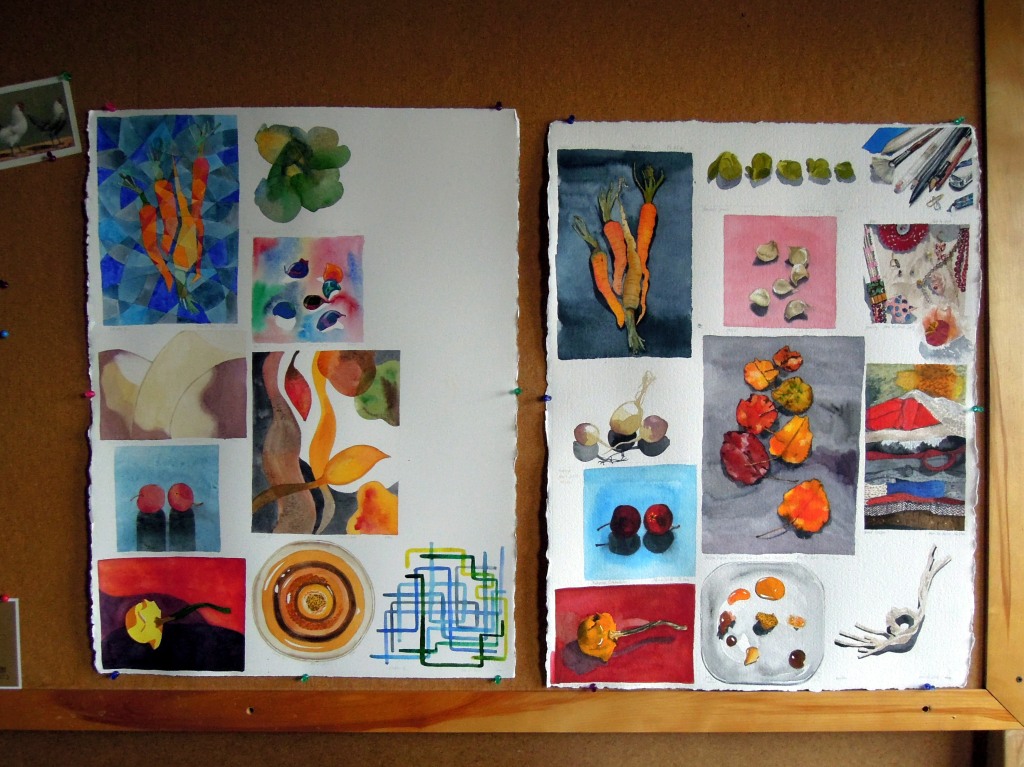 I doubt anyone noticed (or cares), but if you look over the penciled dates on the last seven paintings, you’ll see that they were actually made over only three days, rather than the expected week. Over the weekend Erik and I took a road trip to western Massachusetts (to visit Kuukua in her new digs!), and I decided to just squeeze those days’ paintings into the previous days so I wouldn’t have to worry about bringing supplies with me on our getaway. That wouldn’t have worked with the first phase of this project, since I was doing such elaborately detailed work then, but these paintings have been so much faster, it wasn’t much of a problem. I think it was the right idea, and I enjoyed a few days’ break from painting, but I did find I missed the roughly 24 hours’ downtime between each painting. It got a little crowded in my head, thinking about so many works at once, and I could feel myself edging closer to a feeling of “gotta churn these out” rather than of experimentation and breathing space.

That said, though, I’ve now had four whole painting-free days in a gorgeous, open setting, so surely that will have a positive impact on the next installments. Let’s hope so, anyway, because the next painting due to be reworked is The Geological Closet, and I do not know what I’m going to do about it!