For the fifth day of daily painting: Brussels sprouts. I was delighted to go through my bag from the market and find five sprouts of varying shapes and sizes. I tried out several arrangements before deciding on a simple line-up. I wasn’t able to capture their delicate surface detail, but I am pleased with the elegance of my little sprouties, their outer leaves extending outward like wings (hence the title of the painting, Flies). This painting took me 53 minutes.

At one point, while sketching, I reached for my kneaded eraser and accidentally grabbed the smallest sprout instead; I looked down in surprise when I felt it resist my attempt to squeeze it into shape. Whoops. Fortunately I’d already drawn it so I knew just how to put it back! 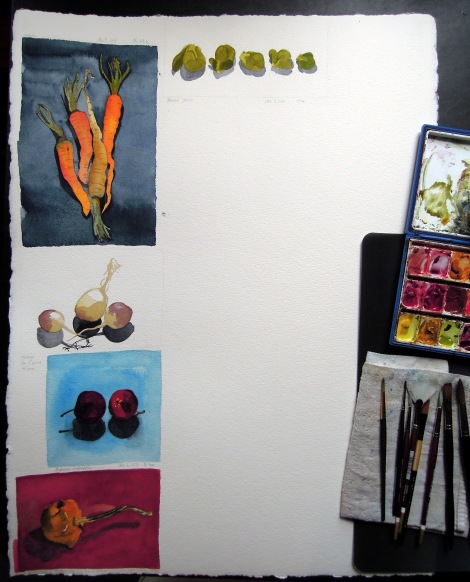 By the way, the turnips from day three and the carrots from day four have now been cooked with a pot roast. I tell you what, I felt quite a twinge when I cut them up!

I went kind of folky-historical with the soundtrack to this painting. If you didn’t already know I have very broad musical tastes, you’ll know now. A few selections from the playlist: