I’ve described in earlier posts how quiet and peaceful our neighborhood is. It’s hard to show this in photos, so the other day while walking home from the laundromat, I took a video. This is about four in the afternoon on a Thursday. You can see how calm everything is.

Until yesterday the farthest we’d been from home was about a mile, so we decided to expand our boundaries. We walked to our second-closest subway station (for a little more pedestrian exploring before hopping on transit); even as we approached there, things started to look more urban.

{click on photos to enlarge; no mouse-over descriptions today}

The subway, I’m happy to report, was quite easy to navigate. Kyoto only has two subway lines, in fact; the rest of the ground is covered by trains and buses (and bikes, which most residents seem to prefer over walking; sidewalks are shared by pedestrians and cyclists). At midday on Friday, the subway was far from crowded, and we found seats easily, across from three older ladies in almost-matching hats, round metal-rimmed glasses, and shopping bags.

Having no destination in mind, we decided simply to get off at Kyoto Station, the city’s transport hub and one of the country’s largest buildings (we figured that would be a good introduction to the city center). Once inside the station, we couldn’t figure out how to get to the surface without going through the shops, so we did — and found two entire floors devoted to food. My head just about exploded, everything looked and smelled so good. But we had just had lunch so we didn’t stop. This might be a good thing as I was completely overwhelmed.

The station building itself is a fabulous structure of glass and metal, incorporating more than a dozen floors joined by long flights of escalators and stairs, with a skyway near the top. Everything felt as gleaming and efficient as what we’d experienced in Hong Kong or Taipei, though without such a crush of people. 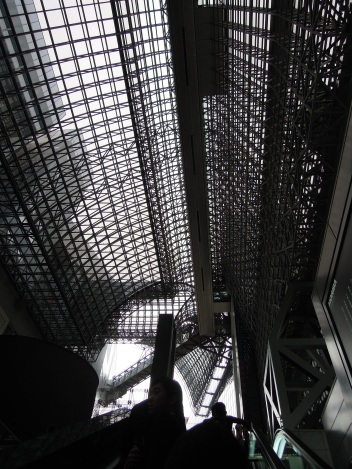 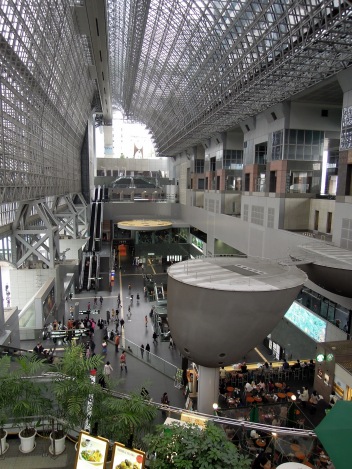 View (below) from the skyway (shown above):

We wandered the station for maybe an hour, inspecting the ramen restaurants and the stationery department on the tenth floor (I went a bit nuts with the stationery), and a “self make-up lounge” on the other side of the building. Then the shopping fatigue started to set in, and we left. Again, we had no destination, so we just picked a direction and made our way out of the station.

There were stone “swatches” in the columns!

We spotted some blossoms on a street corner, near a marker indicating a historic site. 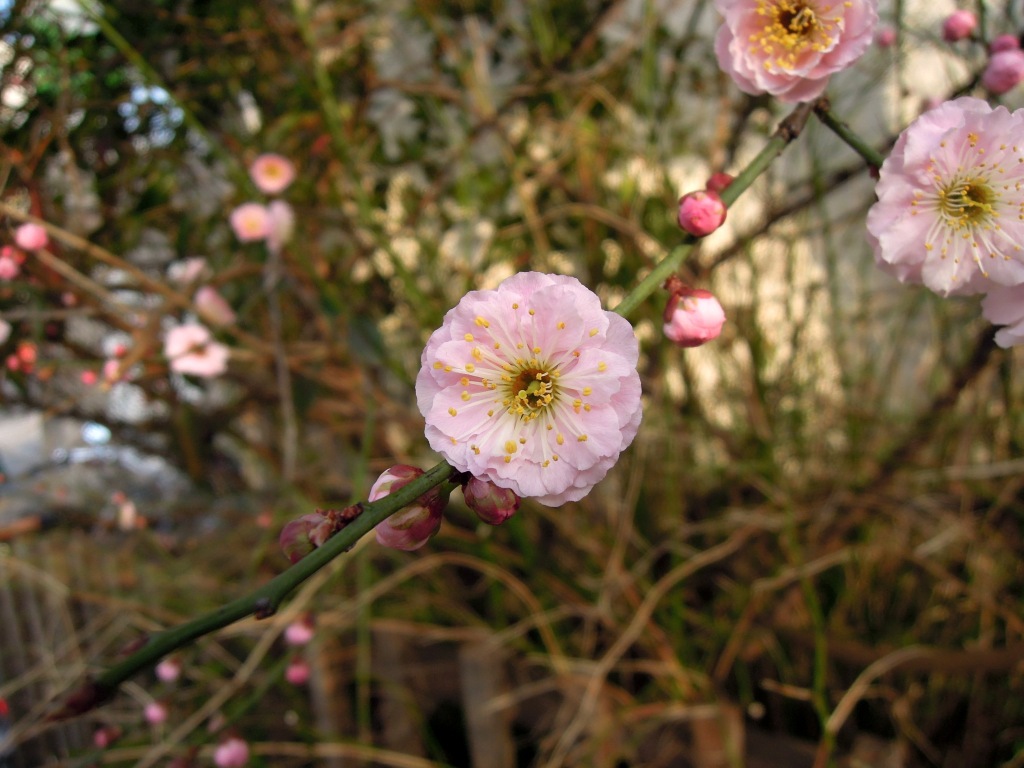 After a 1-km walk eastward, we found the Kamo River and decided to follow it north toward home.

There were many bare trees along the riverbanks, but they’re cherry trees that will at some point blossom. I hope we’ll still be in town when that happens!

The crows here are huge. 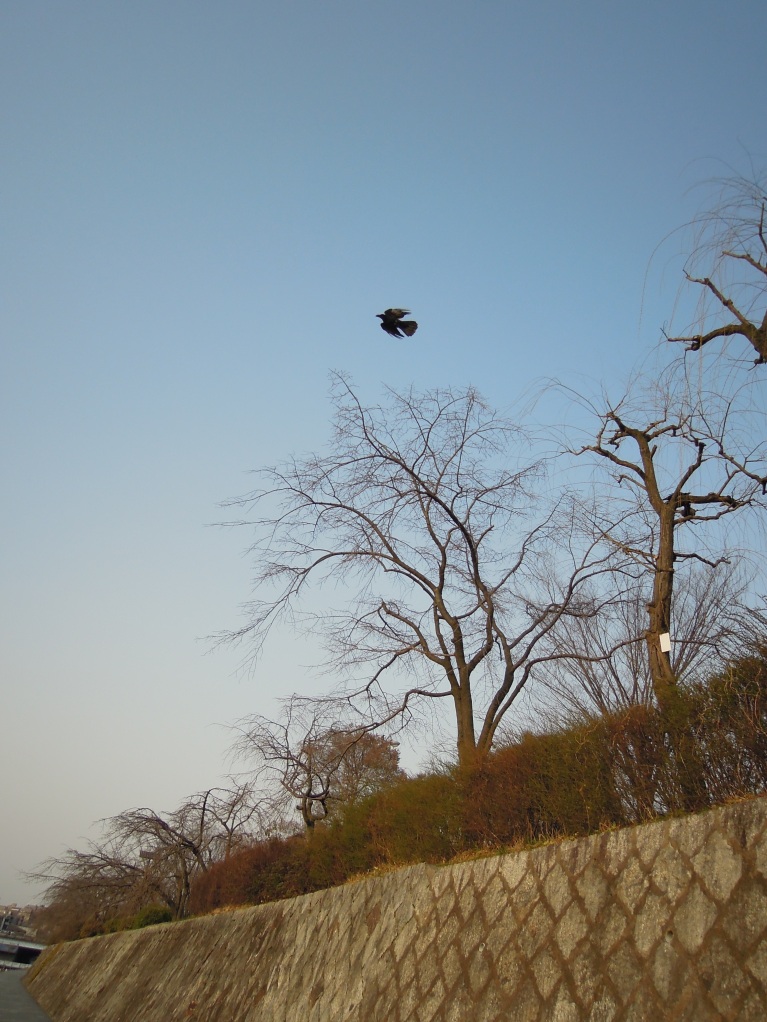 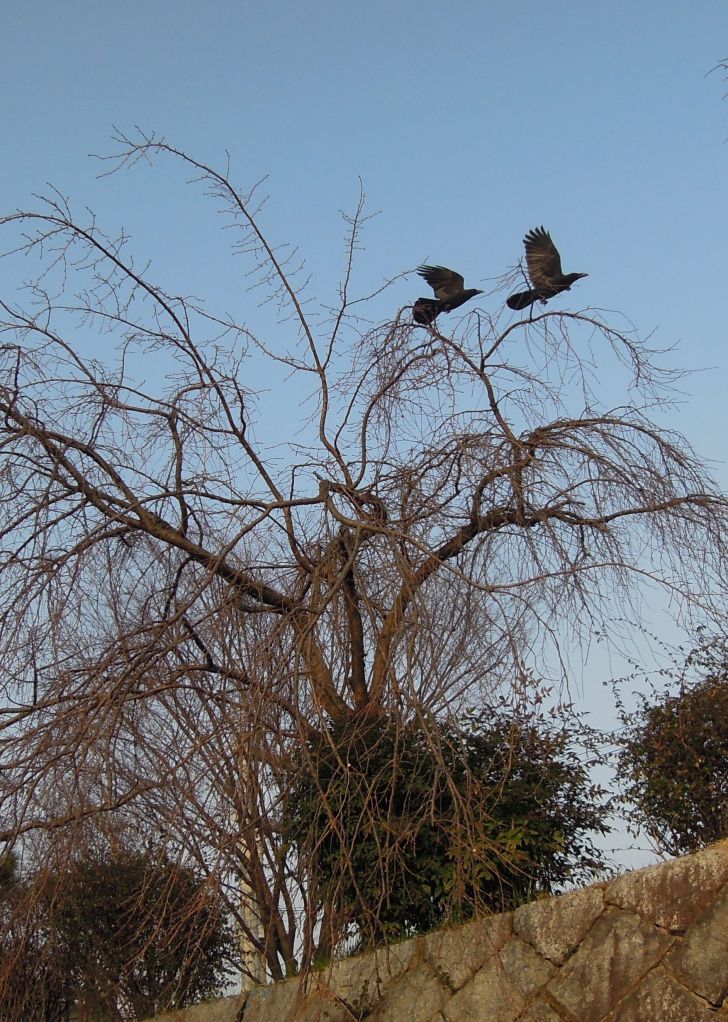 For the last 4-km northward stretch, we took a train. I was quite surprised to find the cars almost empty at 5 PM.

I know I’m in a nation of shorter people when each time I stand up I bonk my head on those rings. 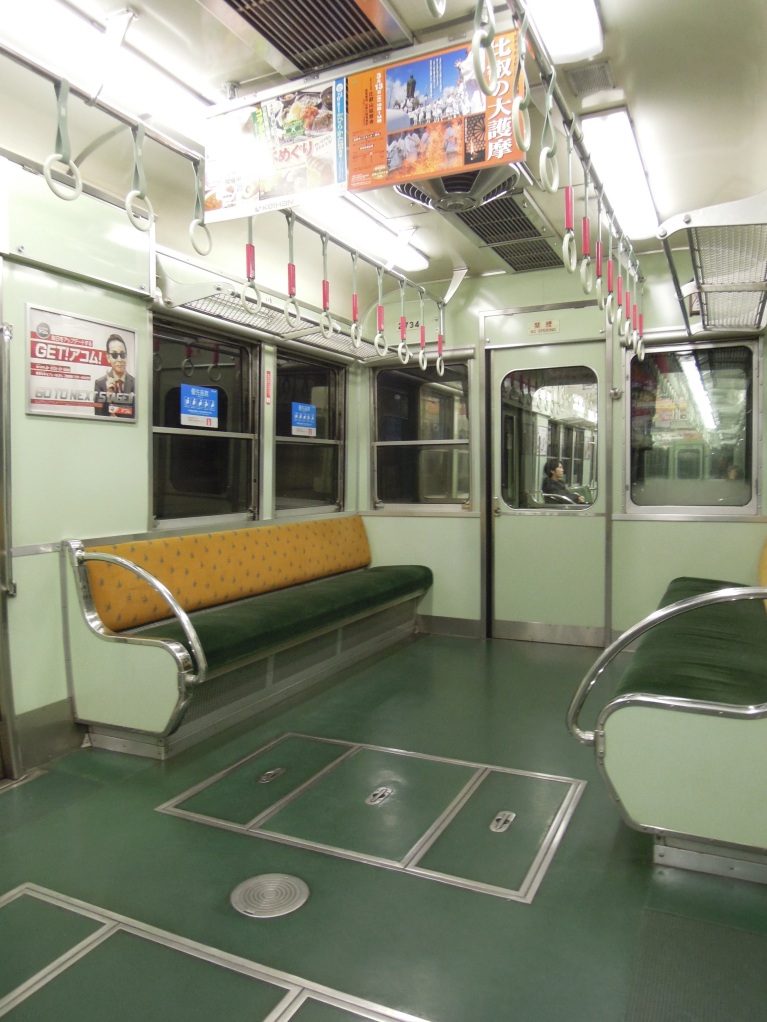 I love this shade of green!

Exiting at Demachiyanagi Station, we found a bakery and an onigiri shop, and bought some snacks to tide us over till dinner. We began our walk west. When we hit the Kamo River once more, we were completely delighted to find a park at the river’s fork, and a place where we could cross the water on stepping stones. 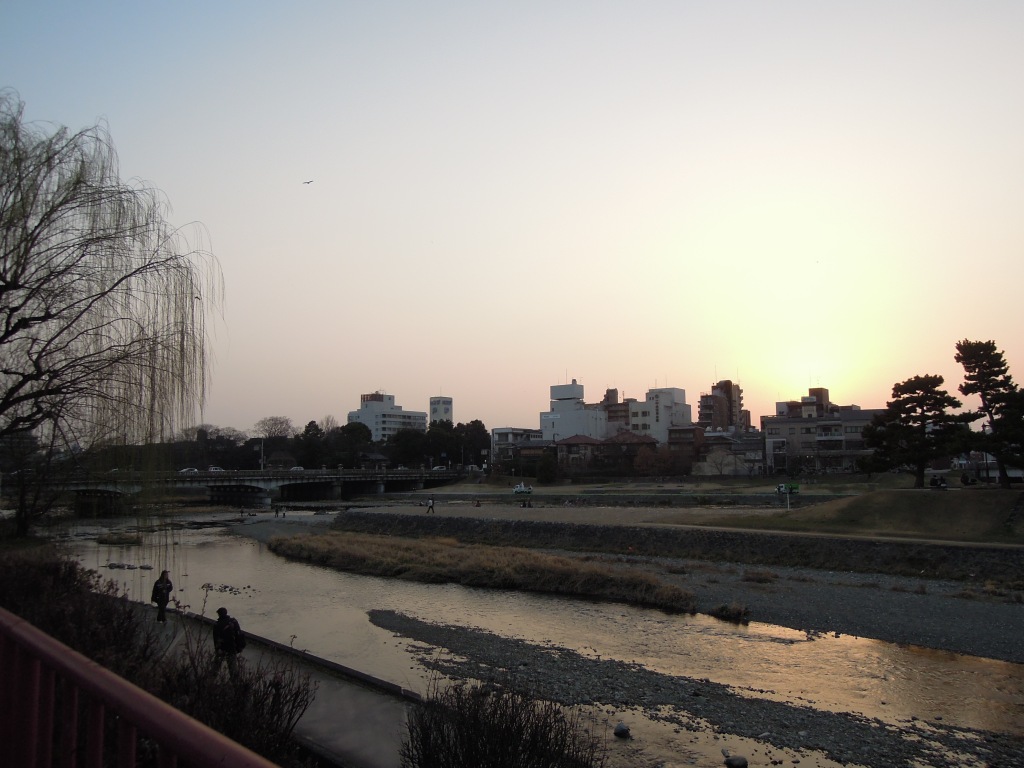 The stones were not that close together — I had to hop.

I’m impressed with these girls for doing this in heels!

At the middle of the river, we settled ourselves on the bank and ate our snack: two onigiri, tofu for Erik, chicken karaage for me. 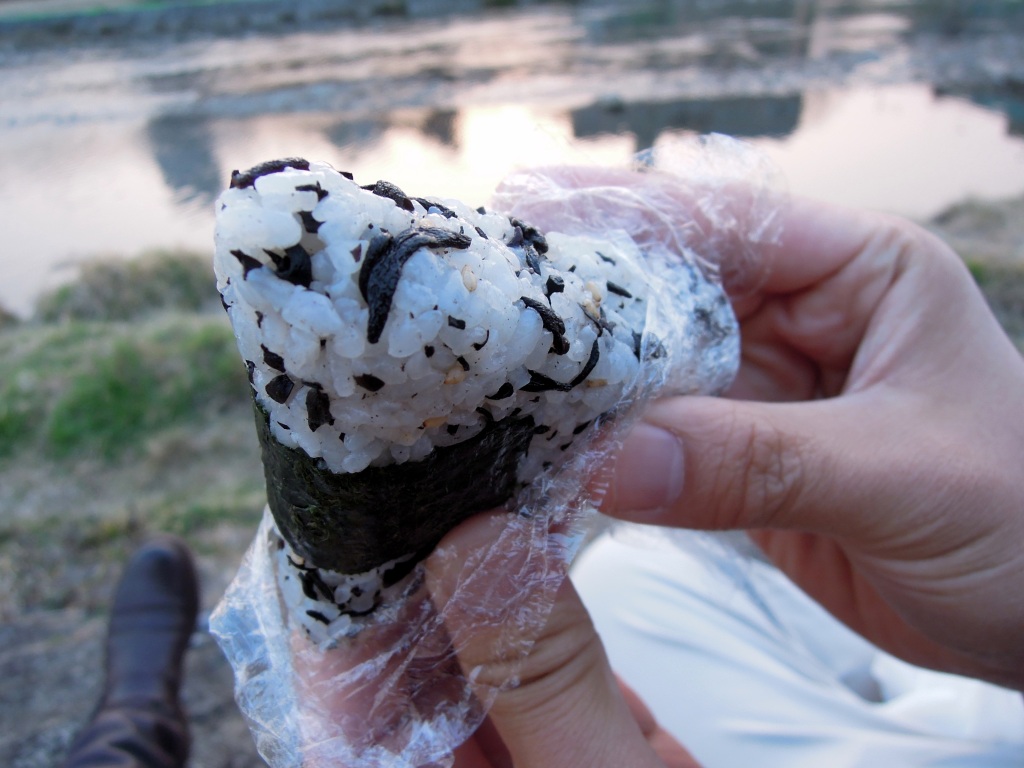 Look, I got some pictures of Erik eating. 😉 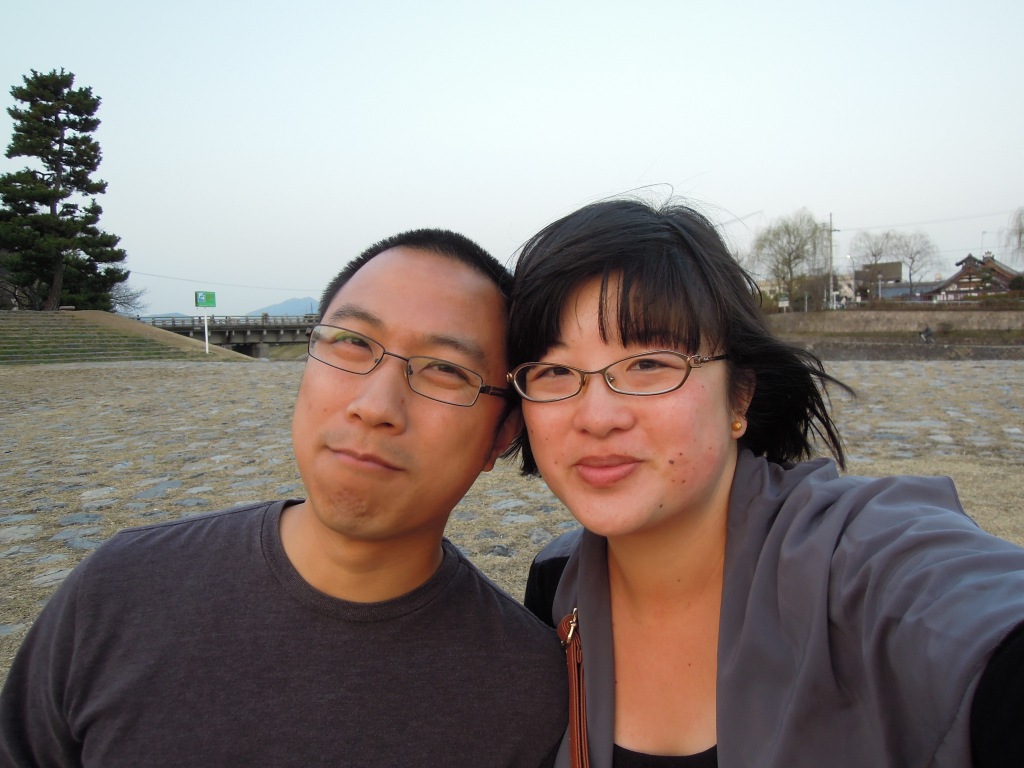 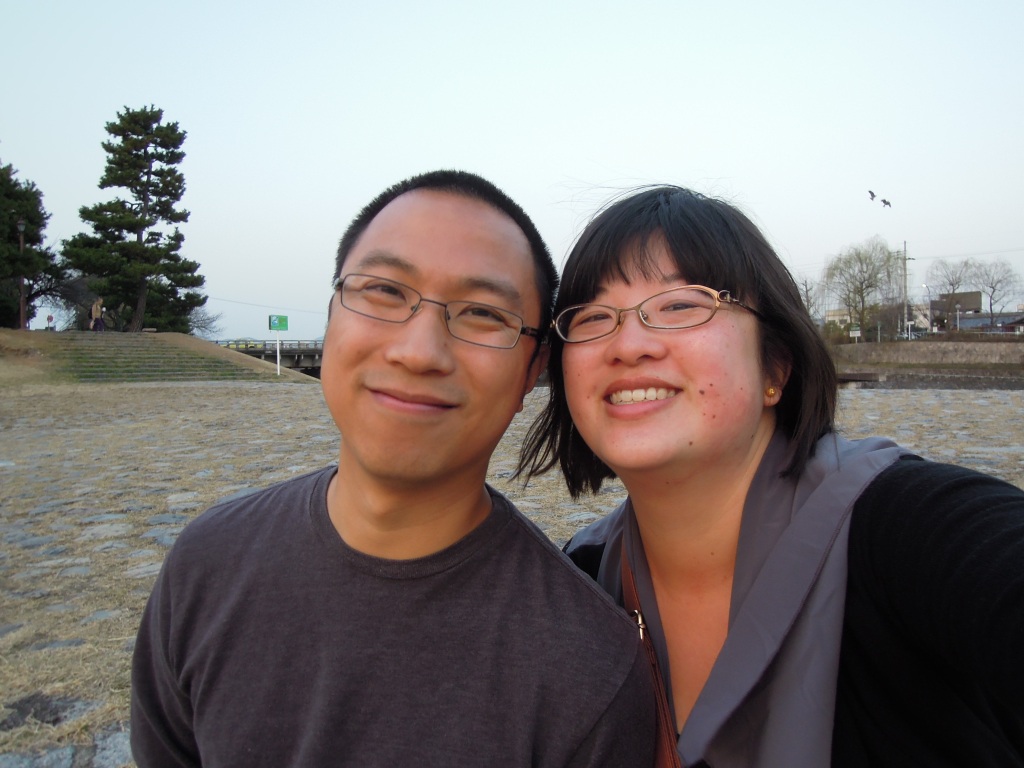 As the sun set, we followed the left fork of the river up to Karamaguchi Dōri. After spending the afternoon in the city center, I’d actually forgotten how little our “main” street was, but it was comforting to get back to where the traffic was so minimal and everything so tranquil.

We had an inexpensive dinner at a tonkatsu place, and picked up some groceries on the way home. At a vending machine I was intrigued by the hot lemonade, so I bought one — it really was hot, but just the perfect temperature for drinking. 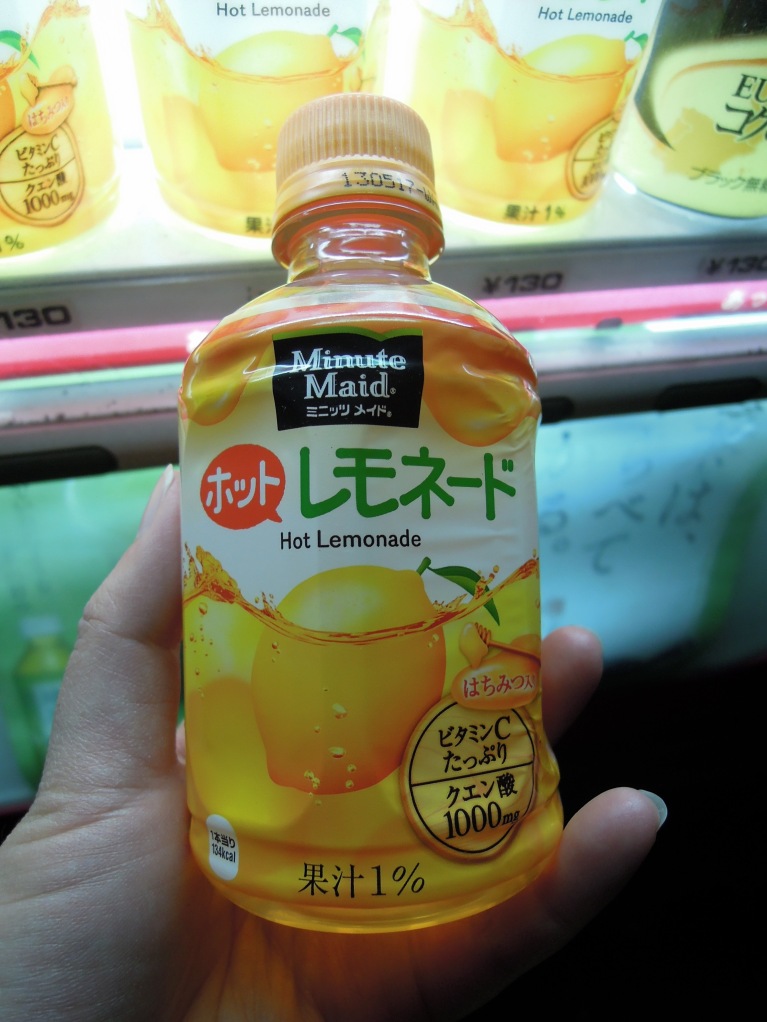 We walked at least 9 km that day, or 5.5 miles. I’m so happy to be getting back into our long walks (though my feet aren’t used to it anymore, and hurt accordingly). And now that we’ve tried out the subway and trains, we can see more of the city on future outings.