(I could have titled this Food and Temples Part II.)

Yesterday we decided to seek out a specialty restaurant I’d read about. Kyoto is home to many shinise, family-owned establishments of long repute that specialize in one particular item or type of item. This one, Toriiwaro, has no menu — it doesn’t need one. It serves one dish for lunch and one for dinner, allegedly simmering 30 chickens for 8 hours every night to create the broth for these dishes. I got hungry just reading the reviews. The restaurant is only a kilometer from our house, so I took careful notes of the location and then mapped a route on Google Maps.

Though most of the streets here are unnamed*, they’re laid out in a fairly gridlike arrangement, so I felt confident getting us to the restaurant. We took a new route, walking almost entirely through the little streets of our neighborhood, passing residences, shrines, and the occasional tiny shop.

{click photos to enlarge, though I didn’t write any mouse-over description this time} 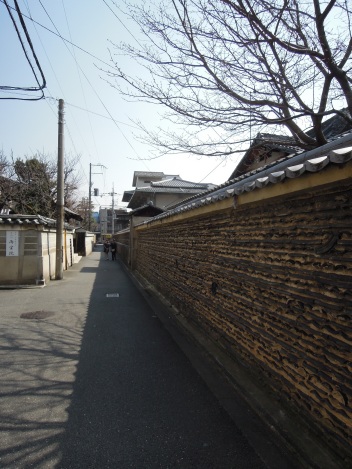 I truly adore these little streets. They are so peaceful and so intimate, just the way you imagine life would be in an ancient city (though I expect that cities of the past were in reality much more crowded, dirty, and smelly, not to mention unpaved). Without much car traffic and scarcely more pedestrian use, they feel tucked-away, private, but not so much so that it’s creepy. And everything is so clean and orderly, from the neat collections of plant pots to the washing hung on balconies.

Along one such small street we found the Cat Temple!

This is a single tree — isn’t that amazing? See the trunk? 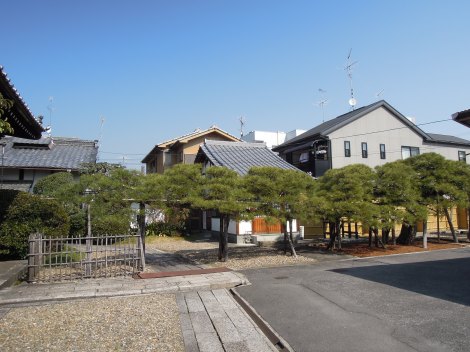 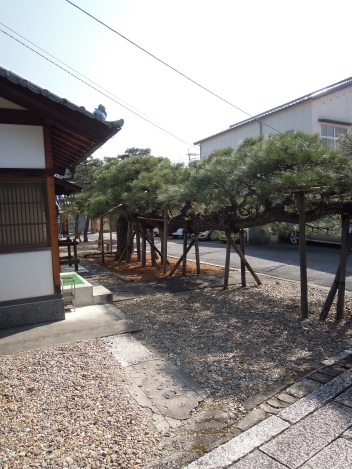 In no time we had reached Toriiwaro, and found ourselves with half an hour before the place opened. So we went for a turn around the neighborhood and discovered a sweet little playground just around the corner, with a shrine next to it.

Aside from one other man and a grandfather and grandchild making their leisurely way around the park, the place was empty. I was struck immediately by how different it felt from an American park or playground. It’s not just that it’s a divergent aesthetic, but that the aesthetic represents an entirely different way of thinking and being — a different notion of what a park is for, and how it will be used. For instance, the structures were minimal and all made of wood: some simple benches, a veranda, three play pieces (a mouse and a bug to ride on, and a climbing structure that is basically an arrangement of logs).

It might have looked boring, except that the landscaping was so thoughtful and so interesting: an assortment of trees from large to small, enclosures of flowers and ornamental cabbages, little ponds and a stream and a fountain. 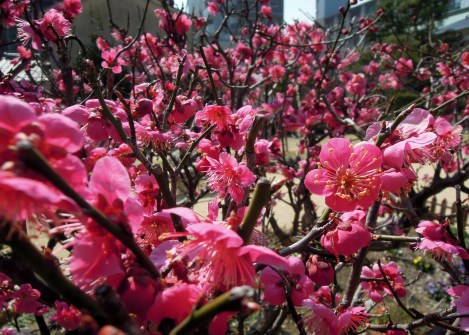 The overall effect was of a little haven to enjoy quietly and at a slow pace. To me it exactly reflected the feel of the neighborhood at large.

The next-door shrine was another perfect little place. 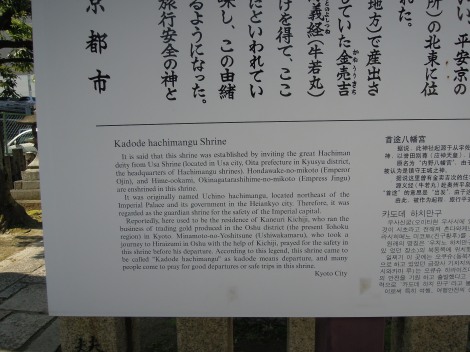 It had a narrow footprint — you could almost call it alley-sized — but the long pathway was pretty and the buildings at the end were raised up and accessed by rocky stairs lined with plants. There were bird (pigeon?) sculptures everywhere.

Not a real bird:

When we got to the top we had the impression of having climbed a mountain, even though we were still close to the ground and next door to tall buildings.

By this time Toriiwaro was open, so we returned there and passed through the noren. (These fabric banners function like “open” signs — when we first walked by the restaurant, the door was open but there was no noren hanging. Now it was up.) 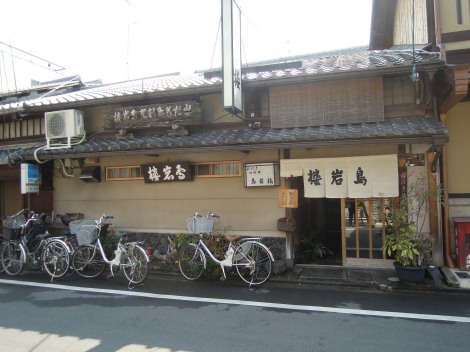 Inside we were met by quiet and a lovely little pebbled walk, but when we stepped up from there to a landing, a sensor sounded a chime and a lady came out to greet us.

Nodding politely as she spoke (nearly every time we enter a restaurant we are greeted with a fairly lengthy, usually breathlessly enthusiastic speech of welcome which is, of course, incomprehensible to us), we removed our shoes, and she gestured toward another long hallway.

She did not accompany us, but we went down the walkway and through a tranquil tree-filled courtyard.

At the end there were a couple of exits to either side and a short flight of stairs directly in front, and at the top, another woman was sitting and welcoming us.

We went up the steps and were guided by another patter of Japanese to an airy tatami room with four tables. Two of them were filled (one with a group of uniformed school kids), one was empty, and another had three young people at it. She gestured at this one, and we were seated next to the others. Though my legs have been sore from all the floor-sitting at the house, I was glad we had the practice so we wouldn’t disgrace ourselves at the restaurant. Even so, Erik and I both had to shift our weight a couple times; meanwhile, the girl next to me seemed to be folded perfectly neatly, as well-balanced and compact as one of those collapsible travel cups that fascinated me as a child.

We poured ourselves tea from the hammered-metal pot on the table. Within minutes the lady from the top of the steps was bringing in a tray of covered and uncovered dishes, which she set in front of us, describing each item (so I assume) as she laid it out. 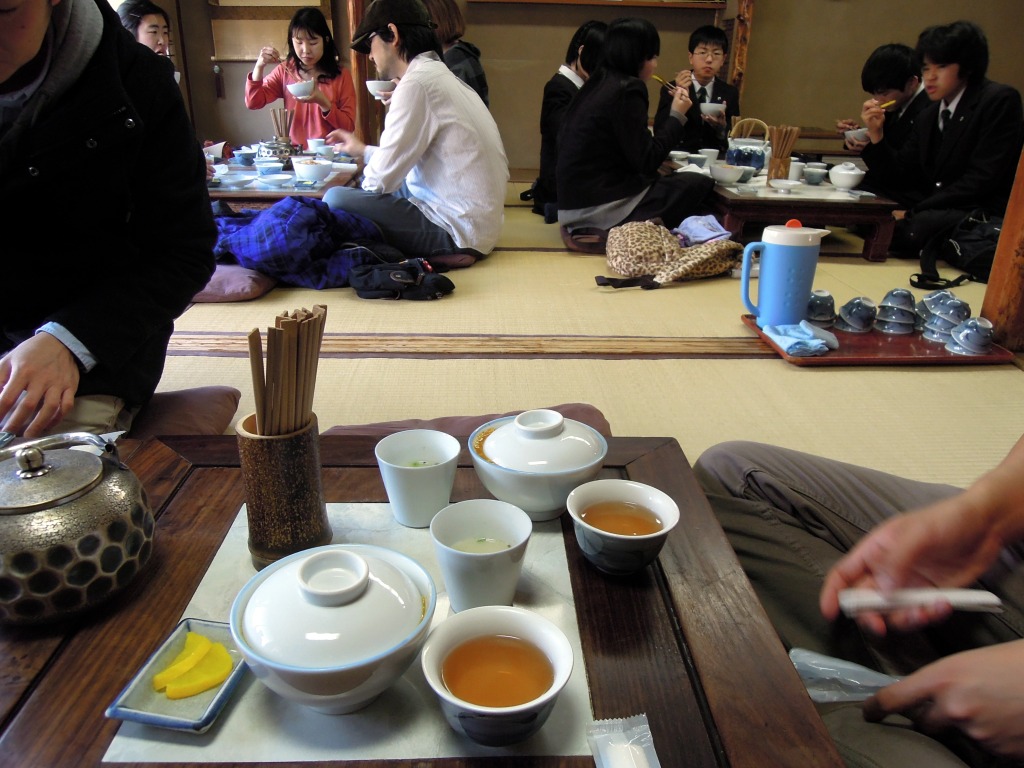 Toriiwaro’s lunch offering is oyakodon, the somewhat gruesomely named “mother and child” dish of chicken and eggs over rice. I uncovered my rice dish to reveal a brilliantly golden oyakodon with a raw yolk in the center, and that tasty sansho pepper sprinkled lightly over the whole. Perfect rice, perfectly moist and tender chicken, flavorful eggs and broth. Simply delicious. Late that night I found myself thinking longingly of that oyakodon!

We’d watched other diners leave the room without paying, so when we were finished, we did the same, and returned to the front where Erik handed our money to the first lady who’d greeted us. Fortunately we had some idea of what it would cost, because there was no cash register and of course we didn’t understand her when she told us the total. She disappeared through a door and brought back our change, and we bowed at each other. When we turned to get our shoes we found that they weren’t where we left them; they’d been arranged more neatly along with the many new pairs of shoes. “It’s like a valet service,” Erik commented.

We walked back down the street, babbling happily about our fun lunch. It reminded me a little of that köfte place we went to in Istanbul, which also only served one thing; these menu-less places are great for tourists, as long as you know what to expect! I was a little thirsty so we stopped at one of the ubiquitous vending machines and bought a white grape drink. I was startled, then delighted, to find there were whole peeled grapes in it.

We went for a walk and bought pickles and some gifts, and then went home to rest. Erik had a nap and I went back out to buy face powder. Japan’s notions of femininity have been making me feel a little unkempt — not that I want to transform myself into a brunette, big-eyed, pink-lipped cartoon beauty, but I definitely feel some pressure (just as Toronto got me to change to skinny jeans, Iceland to sweaters and colors, and Paris to a lot of black). When in Rome… go shopping. 😉

After face powder (I confess I took a “before” pic too, and it pretty much looks exactly the same):

For dinner we decided to take a break from our usual nabe, so we went to our closest little stretch of Karamaguchi-dōri and explored the takeout shops. Actually I am not sure “takeout shop” is the right description; they are more a combination of takeaway and grocery. There are at least three of these within a couple of blocks, and they’re all a little different, but the same in basics. Each seems to be run by a single proprietor. Two have glistening fresh fish in refrigerator cases, the third does not, but has a much more extensive spread of deli-type dishes. All offer a small selection of normal grocery items, local produce, and fresh-made sweets (rice vinegar, eggs, udon, sweet potatoes, mochi) as well as homemade takeaway items like tempura, cooked beans, and all kinds of other things I can’t identify. We visited two of these places, where we had awkward but friendly interactions with the owners, and then we stopped at the supermarket and the bakery. We didn’t know what about half this stuff was when we bought it, which is part of the adventure!

In rows from left to right, starting from top: 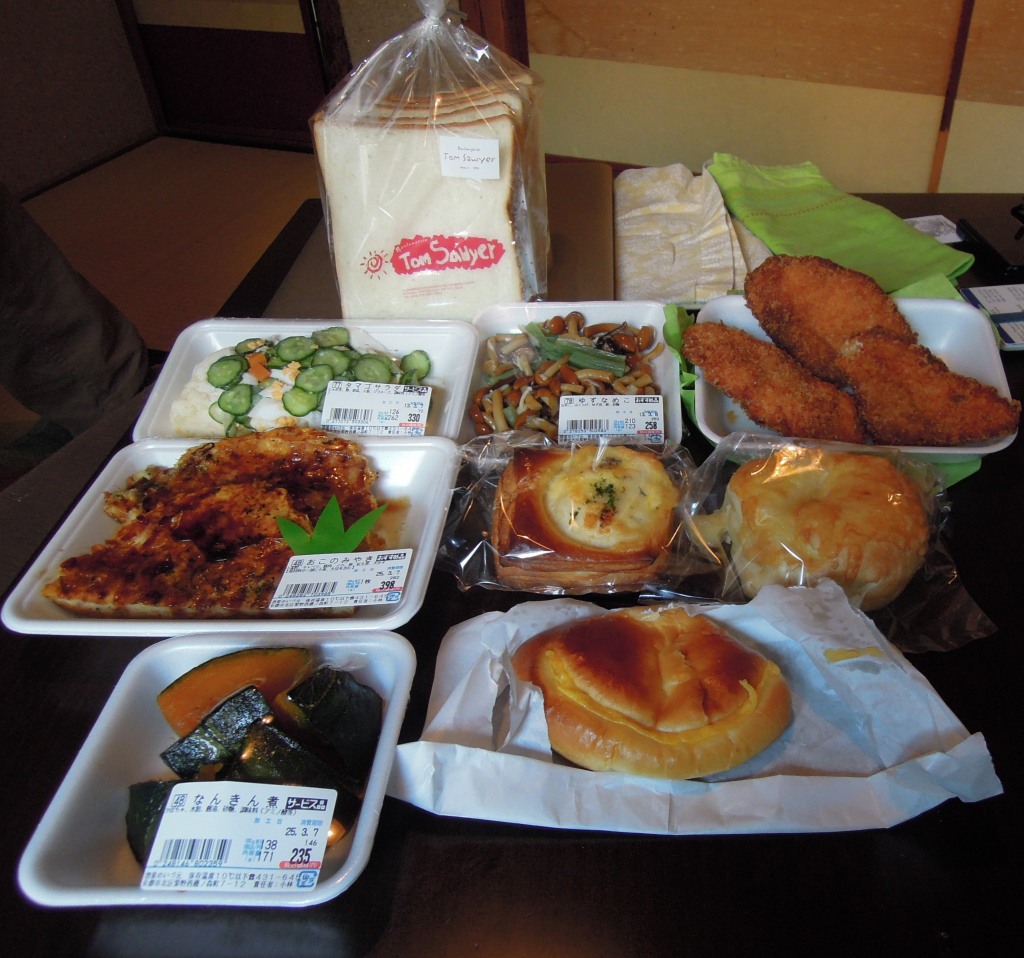 That was way too much food, but it was a fun dinner and very tasty. It set us back about $25.

You see what I mean when I say it’s hard to get anything done here besides eating? It’s so exciting. 😉

*Every time I write or say this, “Where the Streets Have No Name” starts to play in my head.