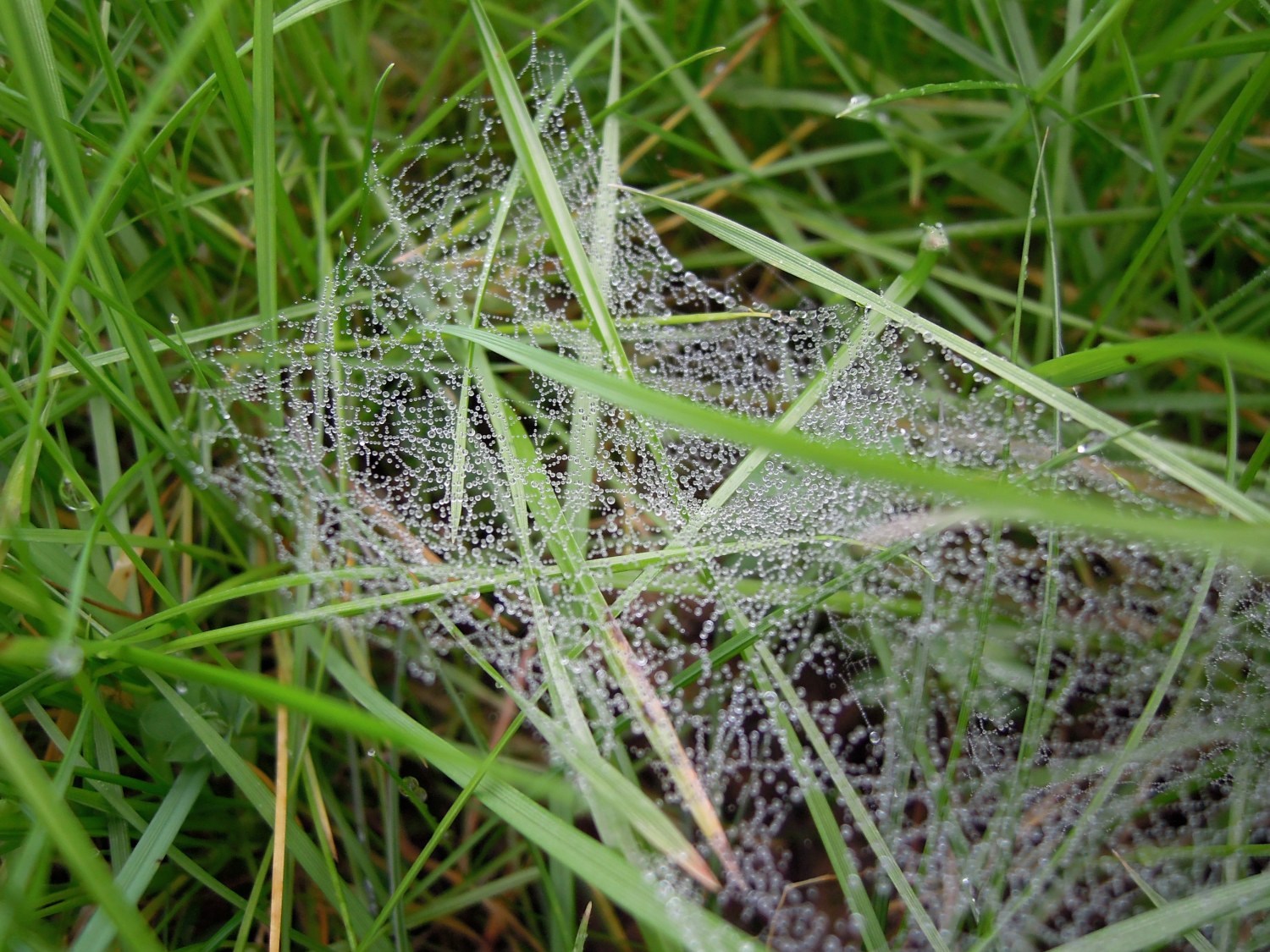 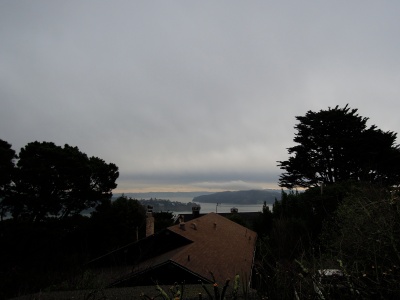 The day after our car-trouble adventure, we went to Sausalito, where my dad and brother-in-law work. I’ve visited their workplace several times before, but this time, while driving toward the parking lot, I saw a sign I’d never noticed before. At brunch I mentioned it and Devin said, “Oh, the Bay Model? It’s worth a visit.” I don’t know how I’ve lived in the Bay Area my entire life and never known there was this giant working model of the Bay. The size of two football fields! Free admission and everything! 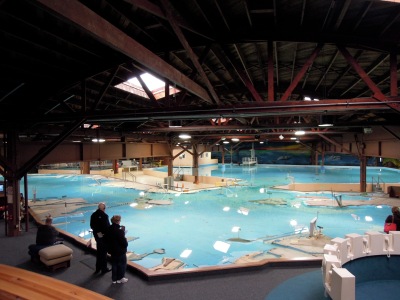 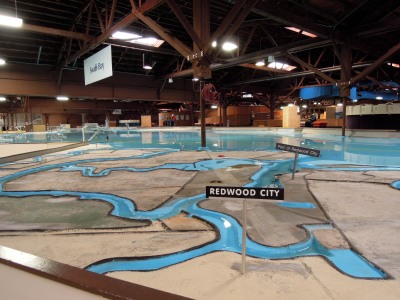 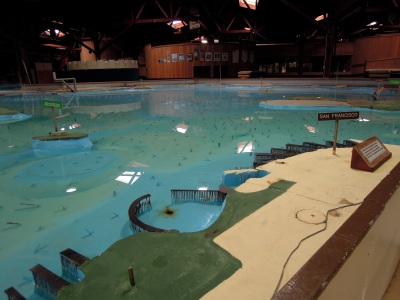 From my private journal, yesterday morning (with revisions):

“One thing I forgot to mention the other day is that our post-travel ‘changed landscape‘ comes from having lived in so many different places over the past year: I’ve expanded my notions of what is normal, which means I now have a hugely expanded sense of what is possible. I was talking about this with Sophie while we were in Boston. It’s like the growth process that happens all your life: you start as a child, thinking everyone does things the way your family does, and then one day you find out that they don’t. (If you are a cultural minority, as we were, I suspect this happens a lot sooner.) Then you learn that other schools don’t do things the way yours does, or other towns, or other states. As we were traveling I discovered that much of what I think of as normal, or even what I think of as good, is actually (North) American. (I’m sure it helped, also, that I couldn’t read magazines or billboards, and that I got almost zero input from TV or radio. For the better part of a year, our thoughts were our own.)

“It wasn’t only the people we saw around us, but our own forced changes in behavior, that made me realize how few things are set in stone. We made do without a clothes dryer for several months, and without a microwave for even longer. I discovered I really like having a hand-held shower. And we didn’t miss our car. In other words, I found out that ‘perfect’ is relative. This is a huge deal for a picky perfectionist like me, who’s easily affected by others’ expectations. All my life I felt like I needed to live up to invisible, unspoken standards, but now I see there are so many valid standards, and so many lovely ways of living. One culture’s ‘healthy’ is another’s ‘obsessive and stressful’; one city’s ‘trendy’ is another’s ‘overdressed and fussy.’ Almost everything is changeable and subjective, so I should just do whatever I want.

“And I feel this way after seeing only one broad corner of the world. How will my eyes see differently after living in Hawaii, or in the traditional house in Kyoto?”

My middle sister has been taking classes in horticulture and agriculture/gardening, so she took us up to her school and showed us the organic garden, with its rows of vegetables, and oyster shells all over the ground (these do something for the soil). Then we walked on the trails near the campus, and our youngest sister looked into a furrow of water and found a salamander! It stared at us for a long time, then waved its hand at us, very slowly, and then darted away quick-quick. 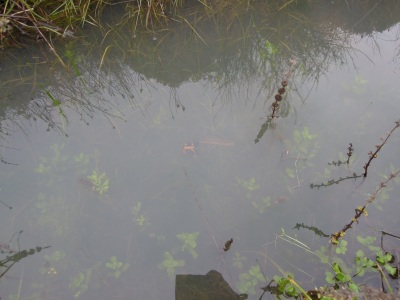 When the year started, Erik and I drove down to LA with my youngest sister, who had a tennis tournament in Long Beach. We found a beautiful AirBnB apartment down the street from our old place in Hollywood, and spent a lovely and busy few days visiting old haunts (John Kelly Chocolates deserves a mention!) and catching up with friends we haven’t seen in years. I love LA as much as ever, and had a roaringly good time, though Erik and I were both appalled at the traffic. Either it’s worse than it used to be, or we were crazy to put up with it for five years!

Back in the Bay Area, we saw more friends, took more walks, cooked, ran errands, and so forth. 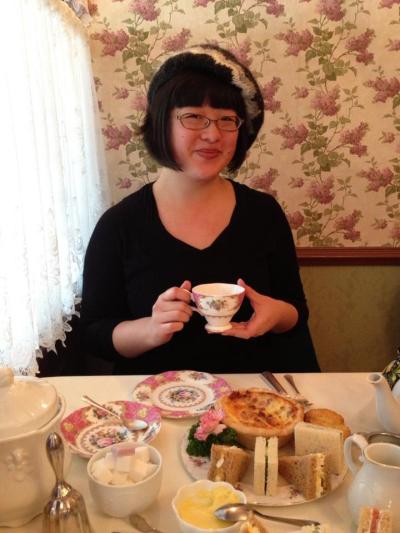 From the same journal entry as above:

“Since we’ve gotten home, everyone has asked us which were our favorite places. I usually say Reykjavík and Paris, maybe Toronto, but the other day I was remembering these cities and something else struck me. In truth, every place we went was marvelous; I’d return to any of them gladly. But the places I felt the strongest connection to… maybe it’s not the cities themselves I loved, but the self that I felt I could be in them. It’s like relationships, no? You fall for someone not just for themselves, but because they give you a tantalizing glimpse of a different way to be you. (Or am I giving too much away about my own crushes?!) It’s the dream they offer: a future in which you regularly eat breakfast in bed, or hike volcanoes, or draw the admiring gazes of those around you.

“And if we want to continue with the metaphor, it’s when you start running up against the dissonances between the reality and the dream that you begin to figure out whether you want this person for themselves, or for that imagined future. I had a month in Paris, 7 weeks each in Reykjavík and Toronto. Is that long enough to know whether a promising relationship will work out? Maybe not, but it’s long enough to decide whether the pursuit is worthwhile. I would consider moving to any of these cities… and even if I don’t, the me that they made me feel I could become, is someone I want to get to know better.”

January 8: in my room at my parents’ house.

I found a short peacock-colored boiled wool cape at a Palo Alto consignment store (the color is a little greener than in this photo). I had such cape envy in Paris. Now this particular small happiness is complete. 😉

When I got home I had a few mementoes on top of that bookshelf behind me in the photo, but mostly the surface was covered in crumpled receipts, electronics cords, and other bits of this and that. I swept all that off, replacing it with sticks and seashells from the beaches of the Scottish Highlands, a hand-printed tea towel from a Toronto shop, a lacquered tray from Fragonard parfumier, and Christmas cards from friends. On the wall I stuck up some travel cards and my own paintings from Boston and Reykjavík. Now that corner makes me think of happy memories, good friends, and new possibility.