It rained on Saturday, after weeks of lovely weather. We ignored it and went out anyway, even to the top of Galata Tower, where you get a 360-degree view of Istanbul. The view was splendid enough when cloudy; I can only imagine how stunning it must be when the sun is out.

We started our day, as usual, with cats. We went to a nearby café for brunch… 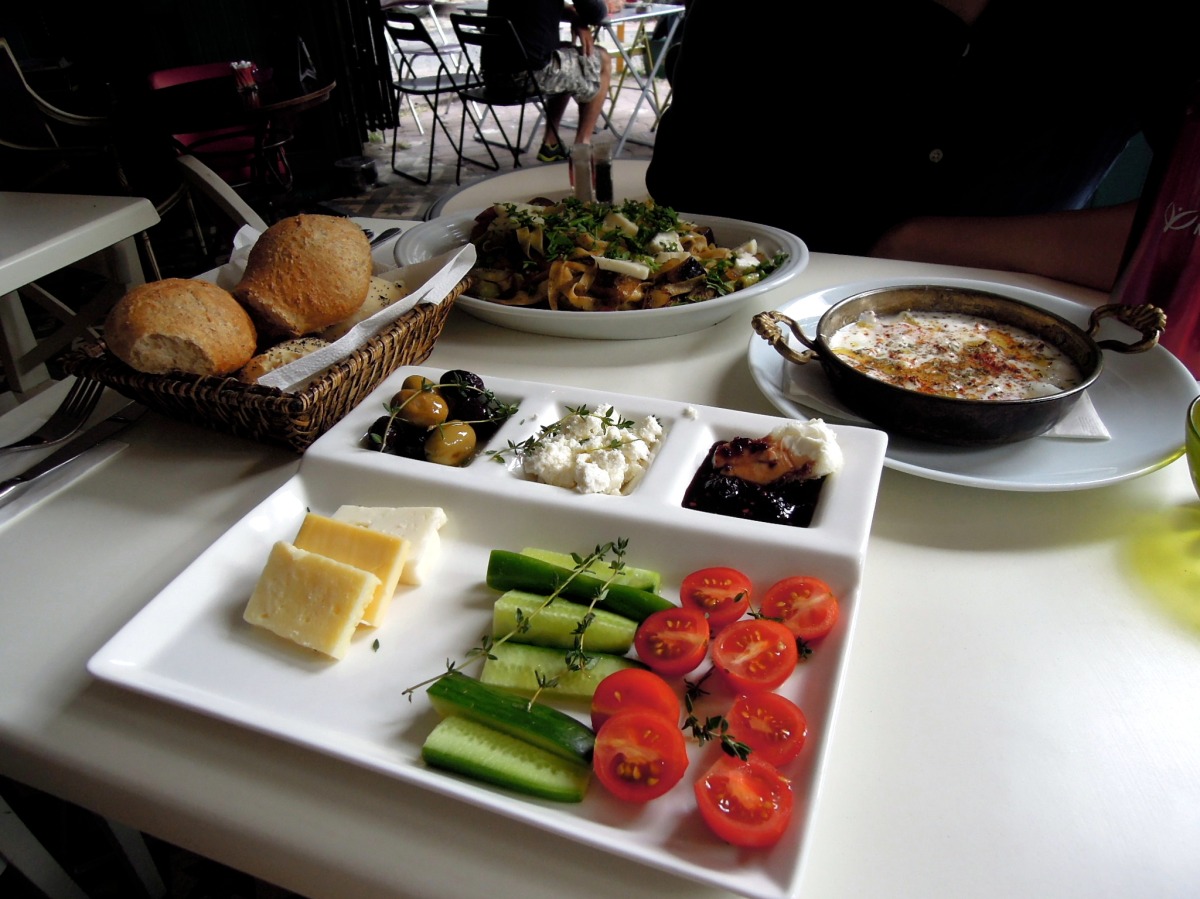 {as always, mouse over the images for my notes, or click them to enlarge}

… and even before we got our food, this lovely silver cat (looking very much like my cousin’s cat Moose) climbed up onto the windowsill and attempted to get in my lap. I didn’t permit this, but other diners did, and the cat enjoyed plenty of company.

Then we walked to Galata Tower, a walk which took us downhill and then back uphill again through some side streets we hadn’t been on before. We passed a number of tiny neighborhood eateries, as well as a shop selling upscale contemporary crafts. It wasn’t a long walk and soon we could see the tower.

There was a line to get into the tower, but Erik and I got into a minor argument about shopping (the old story: I enjoy it, it bores him) and consequently the wait went very quickly. Not that I recommend arguing as a way to make a long queue seem short… but I must say, it really does the job!

As a general rule, if the tower isn’t too tall, I much prefer to take the stairs; the view seems so much more wonderful when we’ve had to work for it. But at the Galata Tower, it wasn’t an option. So we got in the tiny lift and were soon squeezing our way between the other visitors on the observation deck. The door opened northeast so that was the view we got first. 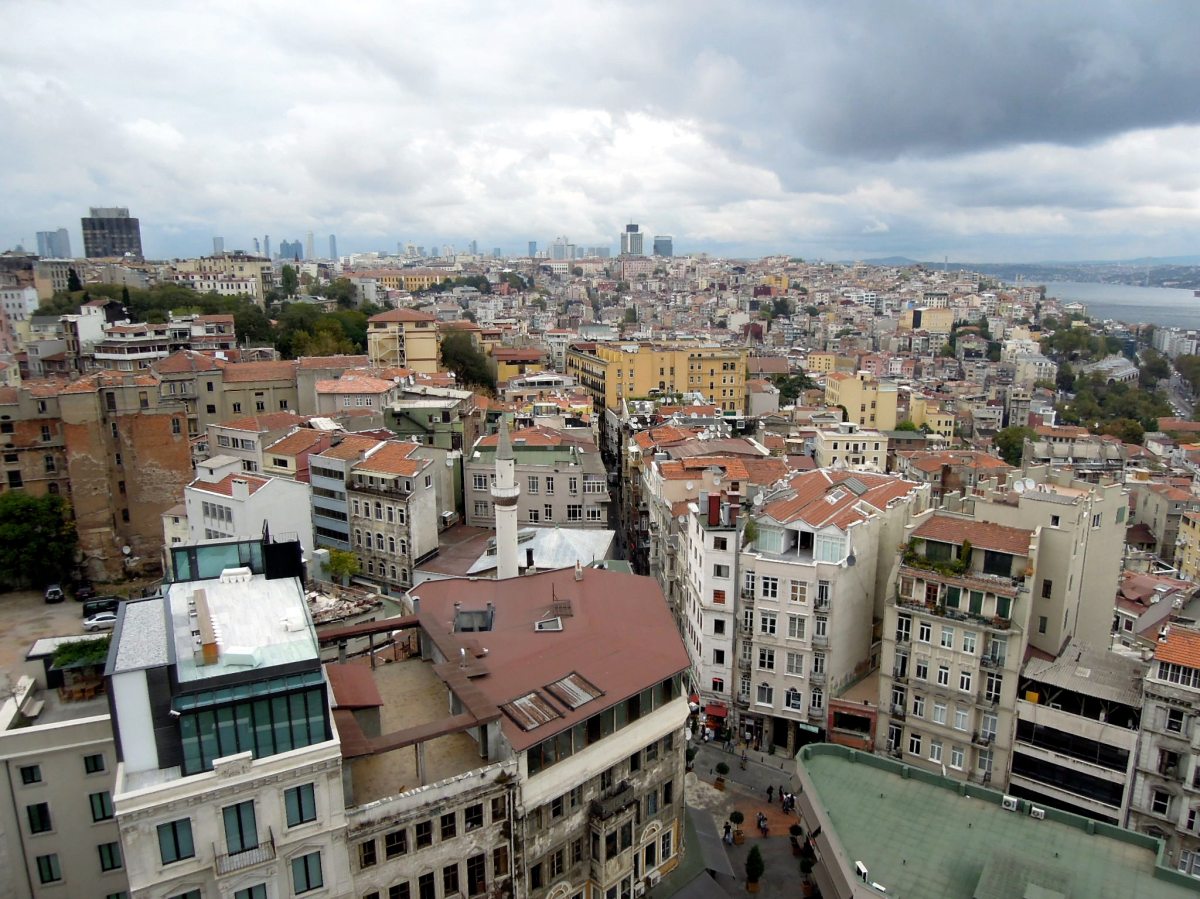 After weeks of seeing Istanbul at ground level, it was fascinating enough just to see the rooftops from this angle. But then there was the Bosphorus.

The narrow observation deck goes all around the tower, so we (and everyone else) inched our way along.

We even spotted a kitty on a rooftop! (And — on another roof — some people filming something, though we couldn’t figure out what.)

And I took a video, so you can get a better feel for the view. If you go to YouTube, I’ve explained some of what you’re seeing in the video.

I really enjoyed our tower visit, though to be honest, the deck was a bit scary, since the stone walkway seems to slope downward near the outside edge. When we finally left the tower it was because my imagination was getting too active about us being this high up (and in such an old structure)! 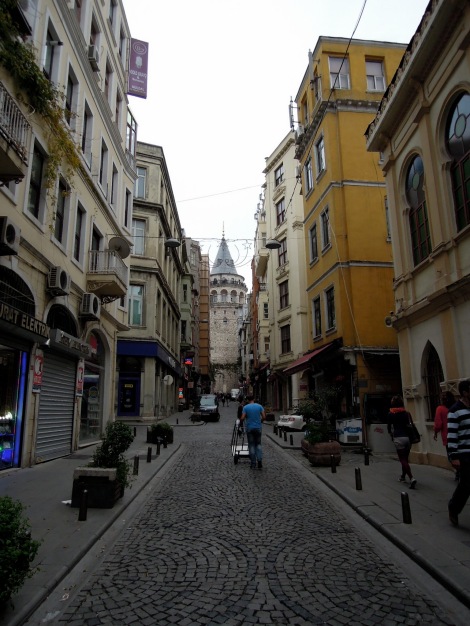 Oh, and I almost forgot! Fun fact about the tower: in the 17th century a man named Hezarfen Ahmet Çelebi made himself some artificial wings, and flew from the top of the tower, across the Bosphorus, to Üsküdar (the shore near the Maiden’s Tower). Sultan Murat IV at first thought Hezarfen deserved an award, but then he changed his mind, gave him a sack of gold, and exiled him to Algeria instead, on these grounds: “This is a scary man. He is capable of doing anything he wishes.” According to Wikipedia, Hezarfen is a title which means “polymath.” I wish I knew what his wings looked like… and I wish I were an animator so I could make a short film about his flight. It would look so amazing.

For our afternoon meal — lunch? dinner? I guess dinner, since it was our last meal of the day — we went to another Istanbul Eats recommendation, a small fish restaurant just across from the tower. I had a delicious, very slightly spicy shrimp casserole, which arrived steaming:

When we started eating, a cat decided the spot underneath my chair was the perfect place.

Partway through our meal, though, a guy walked out of the restaurant and across the street, carrying a folded paper towel. We couldn’t see what was in it, but we could guess, by the way a half-dozen cats (including our new companion) materialized at his feet.

I thought the cats would all share, but there was a standoff between two of them, and no one else dared to get near. Finally one of them apparently out-intimidated the other (with no actual fighting), and settled down to eat. The tortie returned to a spot under our table. About a minute later I felt a gentle pressure on my left foot and looked down to see an orange cat sitting on it.

I wonder if the kitties knew we are cat people, or they just thought our table a pleasant and warm place to shelter from the rain?!

We finished our meal, and then staggered downhill toward the waterfront, in search of a decades-old baklava place. The neighborhood got a lot more random as we neared the water; we didn’t feel exactly unsafe, but it was just a weird, kind of dark area. We could still see the tower from the end of the street we were seeking.

Finally we found the baklava place. There were cases full of baklava in every shape. It was hard to know what to pick, but I indicated to the man behind the counter that I wanted a takeaway box, and when he saw my hesitation, he just started putting together a small assortment. That suited me perfectly.

I have to say, with the exception of the chocolate baklava which I’d never had before, I’ve eaten better. Maybe I just don’t like the Turkish kind as much as the ones I used to buy from a certain bakery in LA. I would get a one-pound assortment and eat an obscene amount of it myself, partly because most normal people don’t like to ingest that much buttery, syrupy sweetness all at once. But I LOVE it… and am still on the hunt for the best baklava in Istanbul.

Today we went to Topkapı Palace — I’ll write about that later this week!