From my journal (edited for clarity):

“I was walking round Haymarket today — out among all the people going about their business, not making eye contact, speaking to one another in accents so unfamiliar to me that it’s not until they draw very near that I realize they’re speaking English after all, everyone so white — and got hit with the feeling I get sometimes of just being so tired of being foreign, and longing to be back someplace where I don’t stand out by my face and every time I open my mouth.

“As I walked along Morrison St I suddenly remembered my LA adult literacy student R—, who told me once during a difficult week that her ex was calling her and asking her to come back to El Salvador. ‘Oh, teacher,’ she said between tears she tried to control, ‘I know we separated for good reasons, but when I think about going home, to someone who loves me, sometimes I think it would be better to go.’ My heart broke for R— all over again when I remembered this conversation; it is exactly my own feeling about going home. It wouldn’t solve anything, and yet during my down moments it seems infinitely preferable to ache among the familiar, rather than having always to adjust to the newness of the place and the people — and later other places and other people.

“I really don’t want to go home yet. Having started this adventure, going home at this early stage would feel so boring. Anyway, it’s not the answer, because I know — I’ve blogged about it before! — that alienation and loneliness are problems that are inside my mind, and as such, will always follow me wherever I go. In some sense this is a comfort: I can go anywhere in the world, and it won’t matter. But it’s a bleak conviction, knowing the feeling is inescapable. There is nowhere I can run, no one I can meet or hug or love, who can ever truly take away the feeling which comes back to me always — because it comes from inside myself. (And the Buddhists might say, why make it go away? Sit with it. Which is I guess what I’m doing.)

“It’s hard to write about such feelings on my blog, because (a) people understandably want me to feel better, and (b) I don’t feel this way all the time — or even most of the time! — so it seems a little emo to discuss it. But as I wrote in another post, ignoring the dark side does us all a disservice. And I think it is especially important, in writing about a lifestyle that most people perceive as the most incredible of fulfilled dreams, to show what it’s like when it’s not sunshine.

“I realized, when wishing one of the passersby on the street would smile at me, that the British reserve bothers me only when I’m alone and feeling that aloneness. What I’m looking for is an acknowledgement that I exist, that I have been here in this eternity and loved and suffered and counted for something, and since I’m an extrovert, a smile and eye contact can do that for me. And this probably explains (at least in part) why I continue blogging while we travel, too, even when I wonder if my creative energies could be better spent elsewhere. When I can count on one hand the number of people in this country who even know I’m alive — it’s such a comfort to remember that elsewhere, people do.

“I also realized, while approaching a guitarist playing in a pedestrian underpass, that music helps against this depressed feeling, as does nature, and animals. It must be that these things are of the moment, whereas my troubles are about the future — a future in which I fear feeling like this again. Human lives are so short, only a moment in an eternity that is not ours to know or experience. When I’m not in the present moment, this makes me sad, because if we only get this short span, and I am spending it doing one of the best possible things, and yet still feeling lonely, then isn’t there nothing good to hope for? But when I am in the moment, such considerations cease to exist. I’m healthy and comfortable and loved (and in the moment that I write this, there is also cake!): the moment is good.

“Thank goodness I have outlets for these feelings. I think everyone must feel this way from time to time, if they’re paying attention; my traveling just makes it a little more pronounced. I’m lucky to have as much support and sympathy and diversion as anyone could ask — and I’m so glad Erik is with me on this trip.”

After I wrote this and ate a piece of carrot cake and drank a pot of white tea, I went back to the flat and asked Erik if he would come out to dinner with me. We walked to the city center and had Japanese food in a restaurant along one of Edinburgh’s cobbled, sloping streets. Then he went back home and I went to life drawing (pics tomorrow), where I met some nice fellow artists (hi Aga!), bopped to a song I haven’t heard in forever but which reminds me of college (and which makes me feel like a bad-ass, a feeling I quite like :D), and I forgot my ego for two hours, drawing.

I thought about taking the bus home but decided instead to walk, and when I heard music coming from the direction of the castle, detoured that way. Noel Gallagher’s High Flying Birds were playing the open stadium and the songs were clearly audible from the streets. People lined the sidewalks, listening, and a few women danced tipsily around the security guards, who laughed but refused to help them take photos. As I passed Castle Rock Hostel a group of young guys was singing along and one of them saw me smiling at them and sang even louder in my direction. I grinned at him and continued home.

It is a privilege to roam the world like we’re doing, and to be temporarily sad and lonely in a beautiful city halfway around the planet. And by then I was already feeling much better, so I could enjoy the music, and the repressed eye-rolls of the young security guards at the end of Johnston Terrace who obviously had no respect for Noel Gallagher, and a nighttime walk in safety, without rain.

I think a lot of people feel that if you’re having a good life, if everything is going well and you’re happy and loved, then you’ll never feel sad. I write posts like this one because I want to say it’s not so. It is as natural to cry as to laugh, though if you’re lucky, maybe you’ll laugh more. I certainly do. If you’re reading this, thank you for being one of the people who helps me feel cared-about and alive even when I’m far from home. I hope I help do the same for you. 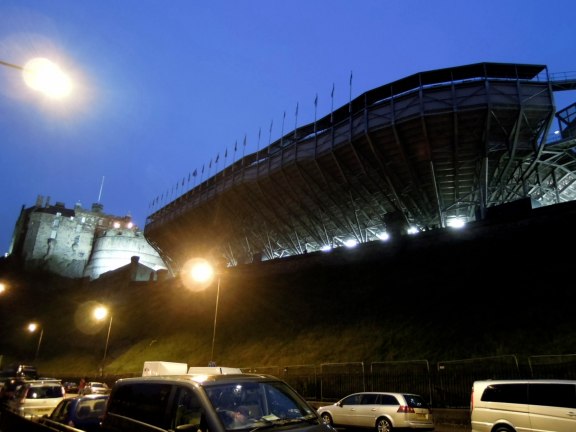