I just baked the best brownies ever. At least, to my taste they’re the best. They’re the perfect cross between brownie, cake, and fudge. The tops are sweet and crisp and the insides are tender and moist and fudgy. When they were done cooling and I had finished cutting them out, there were all these crumbs left in the pan. It would have been a crime to let the crumbs go to waste, so I swept them together with my fingertips and pressed them together, where they stuck together easily in little mounds which I happily ate. That’s what you get when you use lots of butter and chocolate.

I should tell you a little bit about my relationship with brownies. I hardly ever make them. The way I feel about brownies is the same as how I feel about apple pie: when it’s good, it’s sublime, but it’s hard to find a good version. And when it’s not good, it’s not worthwhile to eat it and get fat. So I tend to avoid both apple pie and brownies.

In 2002, when I was just discovering Gastronomica, before I became a subscriber, I checked out one of the issues from the Berkeley library. (The life sciences one in VLSB, if anyone is curious.) Inside was this wonderful article about one woman’s quest to find the perfect brownie recipe. I loved the article so much that I photocopied it and stashed it away for future reference. But like I said, I rarely make brownies, so while I read and re-read the article several times, I never found occasion to try the recipes. So this particular batch of brownies come from a recipe I’ve been saving for almost three years.

Today I decided my cohort could use some brownies. I read over the Gastronomica article again and decided to make some changes. Instead of regular baking chocolate, I splurged on Scharffen Berger, and I also replaced the regular butter with creamier European-style butter and the granulated sugar with superfine sugar. I also didn’t put any nuts in my brownies.

The recipe was easy to follow and everything came out fine. I cooled the brownies and cut them and tried one…

These are some pretty darn amazing brownies. 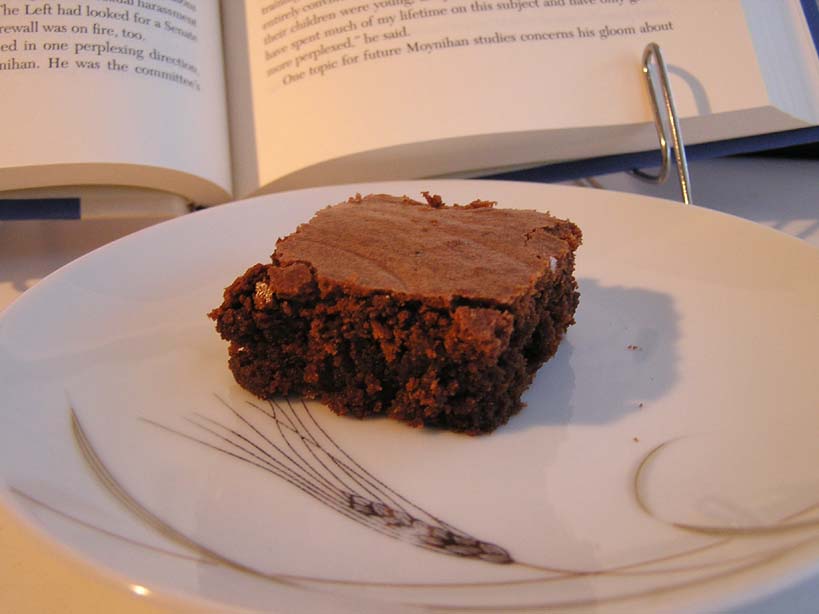 Mix together flour, baking powder, and salt, and resift onto a sheet of waxed paper.

Using a mixer, beat eggs on moderate speed 1-2 minutes, until well blended. Add sugar in 3 additions, beating well after each. Mixture should be thick and light-colored.

Add sifted flour mixture in 2 additions, beating on low speed until flour is incorporated. Scrape down bowl with spatula, if needed.

Pour and scrape batter into prepared pan. Bake 25 minutes, or until brownies have risen and set. The top will set crisply after 25 minutes, so you may have to cut a piece out to determine whether it’s really set inside.

With a small, sharp knife, cut into pieces. Remove with a small offset spatula or a pie server.

Makes about 20, with a couple for tasting. One or two of the brownies may break into pieces, but oh well.

I hope my cohort likes these, because if they don’t, I will eat them all myself, and then I will have a heart attack on the spot and die because these are so bad for you!

And now back to my regularly scheduled reading.

[This post was imported on 4/10/14 from my old blog at satsumabug.livejournal.com. I have since baked these brownies countless more times, with all kinds of substitutions for the ingredients. They don’t always turn out as perfect as they did this first time, but hey: chocolate. If you like dense fudgy brownies like I do, don’t beat the batter for too long, or it will aerate and turn into fluffy cake. If you like fluffy cake, on the other hand, go for it. Use the whisk attachment and everything!]