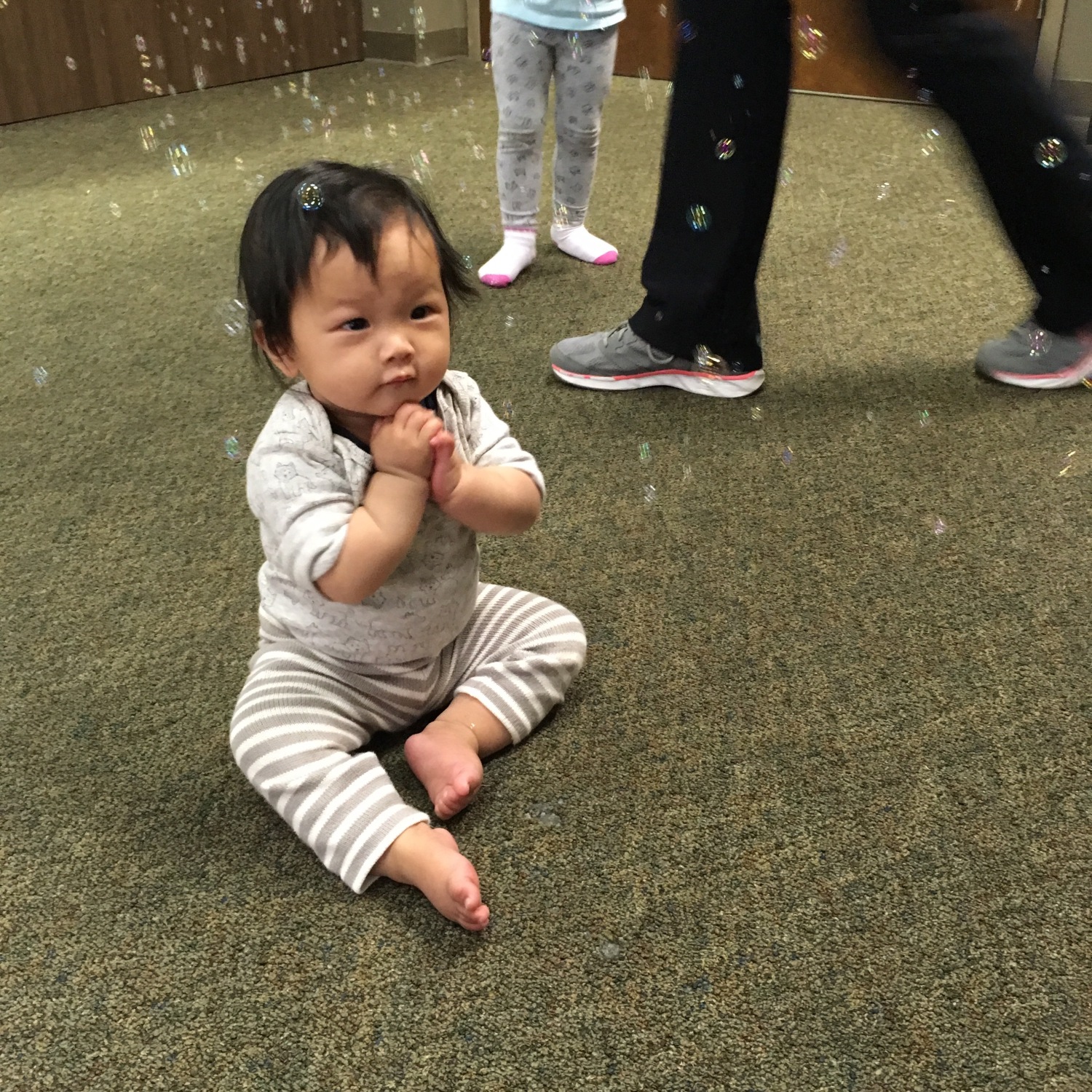 I last wrote here, pensively, two months ago when Owl was almost seven months old. Now she’s almost nine months — just four days short of the amount of time she spent in the womb — and I’m writing this as quickly as I can while she naps in a carrier on Erik’s chest.

Here is a rundown of how the time has gone, in excerpts from the notes I tap out bit by bit whenever I have a moment and some mental energy:

I cried this morning… I realize that these days I never ask for things that are just for me. It feels as if everything I do is in support of someone else, and I cry again because I wish someone would tend me so carefully, but I feel as if I can’t say that because it’ll make Erik feel bad and he’s just about as exhausted as I am. He does take care of me, but there’s only so much he can do when we’re both so tired. I told him yesterday that I feel like it’s a zero sum game with us (assuming I’m using that term correctly), because I feel — rightly or wrongly — that everything I don’t do is something that he’s then forced to do, so that all my “rest” periods become imbued with guilt.

Here’s what I’ve learned about why parenting is tiring. It’s not just that it’s 24-7. It’s that it’s 24-7 with your body and emotions wholly engaged. It’s that you never know how much time you’ll get to do anything, or do it without being interrupted. It’s that you’re playing such perpetual catch-up it’s hard to get to things you really want to do instead of just struggling, day after day, to do all the laundry and cooking and cleaning things up, and maybe, if you get a chance, take a shower.

It’s also the decision-making that’s tiring. If I just got home from an errand with Owl and I’m hungry and thirsty and my hands are dirty and I need a pee, and she’s also hungry and clingy, whose needs do I meet first, and how on earth do I decide?

I keep thinking about my mom, and Erik’s mom, and my sister, and somehow it seems as if I’m the only one who has a hard time?

The lowest point was when I was alone with Owl at a large park and she needed a diaper change and a feed and a nap and I needed to have a drink and a pee and I couldn’t find a restroom. I wanted to just put her down on the ground and scream as loudly as I could. Several times that day I found myself thinking that if I got really sick or hit by a car or something, at least I’d get to rest in the hospital where people would take care of me. I wasn’t suicidal, I was just so damn tired, but I recognized this as a bad state to be in.

I usually don’t ask my mom for advice or input because she’s very opinionated and often disparages me (usually unintentionally), but this afternoon I decided it’s still a privilege to have a mother to ask. So I asked how she managed to cook dinner every night when I was Owl’s age. At first she didn’t remember, or said, almost dismissively, well, you just do it! And she said indignantly that unlike me, she couldn’t afford to go out or get takeout. But she thought it over and eventually said that she prepped dinner in the morning, when I was napping. And that she cooked only simple things, like roast chicken, and avoided Chinese cooking because there’s too much prep. She added that her dad was there to help, and that since we all shared one house, she had minimal housekeeping responsibilities. And that’s how they lived until I was about two. I said I was asking because I feel tired all the time. She seemed surprised by this and said she wasn’t tired all the time, and I shouldn’t be tired all the time.

She also said, though, that she didn’t mind that all she did was cook and look after me, because there wasn’t anything else she would have been doing. I wonder if I’m making things worse for myself because I don’t want to be purely a stay-at-home mom. But how much of that is for me, and how much that I’m trying to prove something (and to whom)? 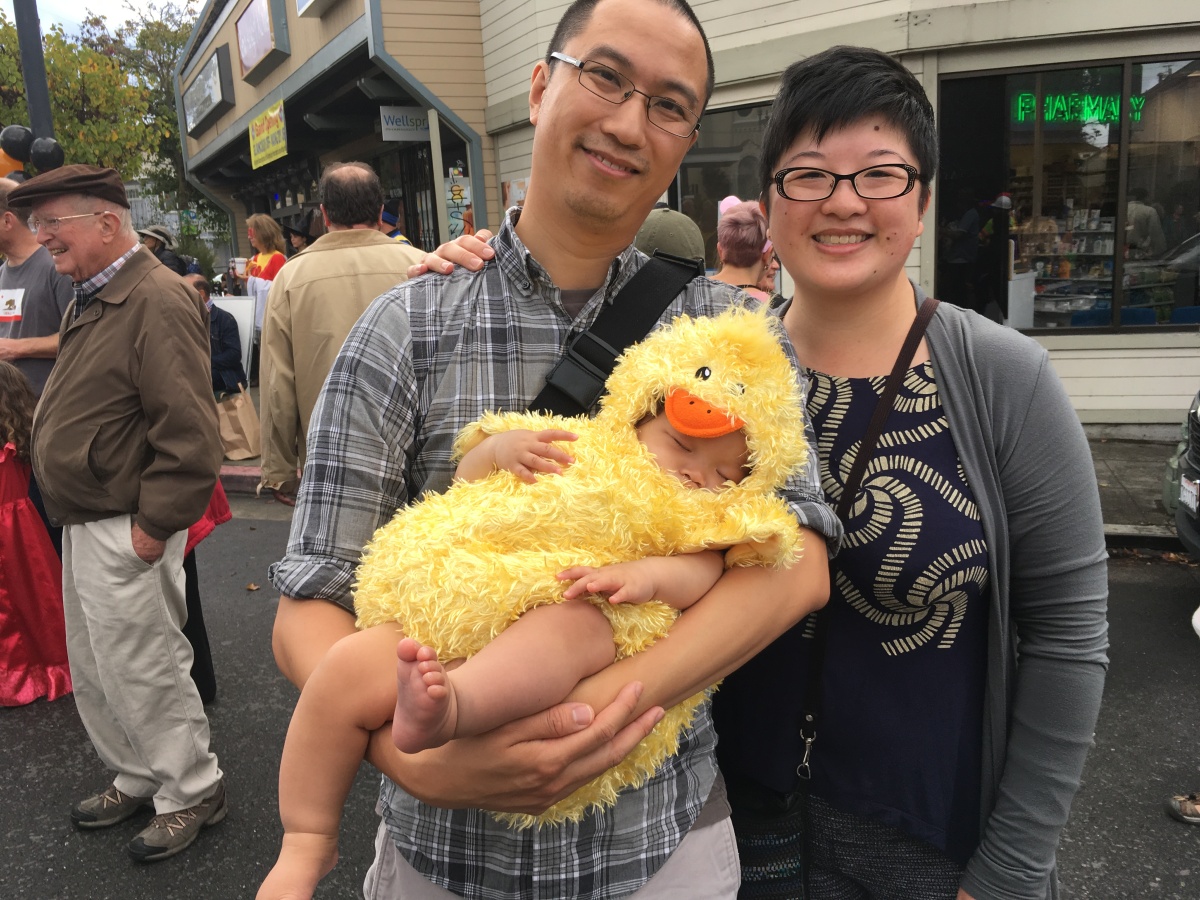 Owl is eight and a half months now. She crawls, she pulls herself up to standing (and sits back down again), she “cruises” (walks alongside something she’s holding onto, like a crib rail), she climbs onto things of about 6-8” height, she waves in several different ways, she gives high-fives, she scrunches her nose on purpose (though we are not certain what she means by it), and she recognizes certain words, at least in context (milk, Teddy, Lyapa, grapes, banana). It’s a cliché, how fast the time goes with a baby, but it is unavoidably true.

I’m a little less tired than I was about a month and a half ago, but I don’t think that’s because anything has gotten easier. It’s more that thanks to that kind of crisis moment I finally, fully, realized just how exhausted I was and how hard I was being on myself. I started doing a lot of thinking, and talking things over with Erik, and changing the way I/we do/perceive things. This is a work in progress but still, things are better now — a lot LOT lot better.

As a result, I have found time in the past month or so to read some very good books. All of these have been paradigm-changing for me in some way, and though I wish I had the time to devote an entire post to each one, you may hereby consider all of them highly recommended:

I even made tiny pancakes!

HAH on things getting easier/less tiring. Almost immediately after writing the previous note, I had the most exhausting week I’ve had since the 4-month sleep regression. It felt almost like having a newborn again. Owl had diarrhea for four days (she was otherwise fine, but it was so messy I was afraid to go anywhere), Erik was acutely ill for a day-plus, I had aches and chills and fatigue for a day or so (thankfully not on the same day Erik was sick), Owl was teething badly and it made nursing quite painful for me and she was cluster feeding (on two separate nights, she woke hourly), I had my first-ever plugged milk duct. At the same time I happened to take a weeklong Facebook break, though I kept a running list of the updates I would have put on FB if I’d been on. You can see the rapid descent of my mood:

9:46 AM: TFW* the patch of floor under your kid’s high chair has been washed more recently than you have. Has been washed, in fact, several times since the last time you had a shower.

2:20 PM: Two new tools for keeping a baby busy while one cooks: a silicone pastry brush, and a frond of fresh dill. 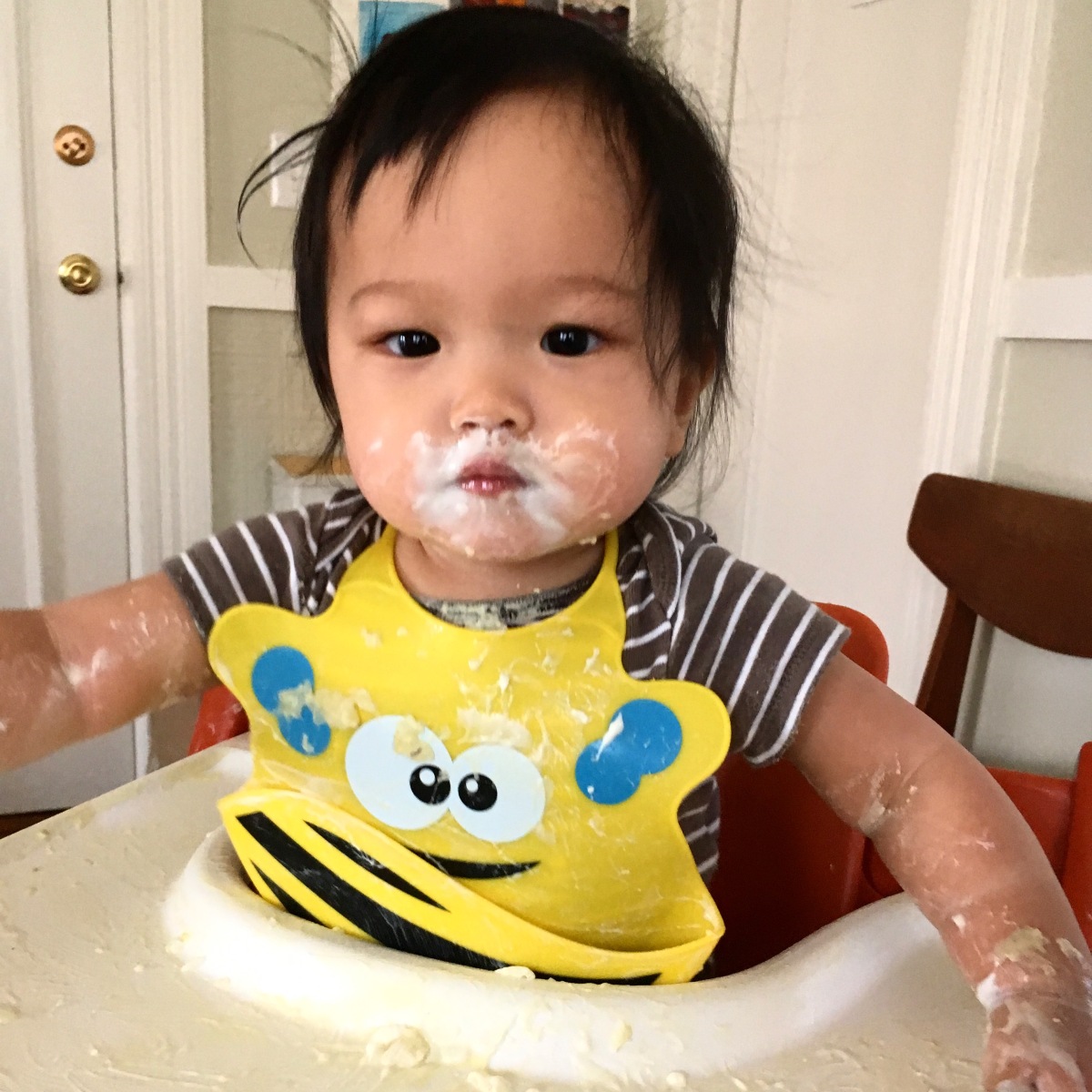 8:07 AM. Owl has no use for toasted bread. Gave her a bit of toasted scone, she dropped it on the floor 3x and then picked it into little pieces and swept those off her tray. Then I started eating the rest of the scone and she wanted it because she saw me eating it, but when I put it on her tray, she touched it, made a face, and ignored it thereafter.

12 noonish. Owl was on the floor. I looked away and when I looked back she was on the bed. What?! We tried to get her to do it again and she struggled. Babies are mind-boggling. [She later climbed onto the bed three more times, with help from the same firm cushion she must have used the first time.]

12:39 PM: I’m so tired I just drove three miles before I realized I was going the wrong direction. Also, just now I was washing my hands and instead of turning off the water I turned out the light.

Evening: On our drive back from the South Bay, Owl kept crying and I kept singing to her with increasing desperation. Got through nine animals for the “fiddle i fee” song (cat, hen, goose, duck, cow, sheep, dog, cat, rooster… I think) but the progression made me feel like I was losing my mind, so I switched to the little duck song and ended up changing the two-duck verse to “Two little ducks that I once knew, one was a rapper and the other was too. The one little duck with the feather on her back, she led the other with a quack quack quack… I guess that’s duck rap.“ It takes more mental energy to invent lines like this but I have to do it or I really do feel like I’m losing it. Makes me feel like nothing more than an (unsuccessful) entertainment system.

11:08 PM [After cluster feeds on painful nipples, plus plugged duct] It’s only physical pain and frustration. It could be so much and so many worse things. But it’s hard to have perspective in the midst of this.

It’s been a particularly hard week and a half. There’s some improvement, I think — evidenced by my being able to write this — but I’m still working to keep my head above water. I still don’t know if I’m trying to do too much, or not asking for enough help, or having too high expectations, or what. It’s too hard to get enough distance on this to know what makes sense and what doesn’t, anymore. I hate to start and end this post on low notes but that’s just how it’s been. I write when things are a little manageable and that means everything in between is… busier than that.

I will say, though, that before I had a child, if I’d read a post like this I would have just been horrified. Indeed, posts like this are partly the reason I was, for a long time, unsure I ever wanted to be a parent. To that self (and anyone of similar mind who is reading this), I say, please know that while the shitty stuff is all true, it isn’t the whole story. It would be so awkward and feel so self-indulgent (not to mention fate-tempting) to write lengthy posts about how incredible my child is, how delightful, how fun, how amusing, how fascinating. I mean, maybe I should write at least one post like that. But the thing is, I write so much for myself, and I write about the hard times because I don’t always remember them later. I’ll always know how much I love Owl and how fabulously interesting she is all the time. But the tough times? Once they’re gone, it’s only too easy to forget. So I write these posts because I want to remember these times as well.

Also: over the weekend I spent some time with a friend who has two children, and she said, “It got a lot easier after the first year. Put it this way: it got enough easier that we decided to have another one.”

Meanwhile, I think Owl is learning to say Mama.