On Saturday I was out in East Oakland replenishing Thai ingredients. I’ve now visited small Lao and Cambodian grocery stores as well as a larger Vietnamese market. All of these have prepared foods laid out next to the register — a small to large selection depending on what day and time you go — and I often pick one at random to take home and try. Some I’ve liked, some not. This time at Mithapheap I bought a mound of sticky rice with coconut, jack fruit, sesame seeds, and I think peanuts.* After an initial “hmmmmm” reaction I liked it very much.

The owner also noticed me eyeing plastic containers of noodle salad and pale greenish liquid, and explained that the two went together as a noodle soup. As he rang me up he remarked, “The whole thing only five dollar, so it’s a good deal.” He said I could eat the soup at room temperature or heat it up just a little, so as not to wilt the fresh vegetables and herbs.

At home I opened up the soup container and brought my nose close, smelling fish and lemongrass. I went to the internet and decided I had bought num bahn chok, a popular street food often referred to as Khmer noodles. I loved it. It made me think of a lighter-bodied, lighter-spiced combination of Thai green curry and Vietnamese phở, with a touch of coconut and a much heftier proportion of fresh salad-like ingredients (basil, bean sprouts, cabbage, carrot, green beans, and several herbs I didn’t recognize; there was one with a citrusy flavor).

As I savored this soup I remembered there’s a Thai temple in Berkeley, Wat Mongkolratanaram, that serves a meal on Sundays (technically by donation although I’m not sure how much wiggle room there is in the posted prices). I have known about it for more than a decade — it’s less than a mile from where I used to live as an undergrad — but for whatever reason, I’ve never gone. I think, maybe, in those days I felt more tentative about exploring new places unless I already knew what I was doing; moreover, I was afraid the food would be too spicy. (Or maybe I was afraid the dishes would only feature meat, which I was not eating, or tofu, which I dislike.) Anyway, years went by and I forgot about the temple. But now we’ve been twice to the temple in Tampa, also called Wat Mongkolratanaram (I am not sure whether it is a name or more of a title/descriptor), so I wanted to visit the Berkeley wat and compare.

The Tampa wat is on the Hillsborough River, so when I think of it, I remember the two broad sweeps of blue — river and sky — divided by trees, with flocks of birds passing overhead and the Florida sun lighting up the temple gilding. The wat is a decent-sized compound with its own parking lot and plenty of flora.

The Berkeley wat, on the other hand, is a converted Victorian house in a residential neighborhood; nearby homeowners have, in the past, complained of the Sunday crowds. The Ashby BART (rapid transit) station is a few blocks away. On the day we went, it was pouring rain and the corridor to the serving area sat under an inch of water in some places. Other than that, though, we enjoyed ourselves as much as we had in Tampa.

clockwise from top center:
beef noodle soup, Isan-style salad (kao nam klook), red curry and pad thai with rice, sticky rice with mango and egg custard, kanom krok. I did not at all care for their pad thai, and some of the mango was unripe. 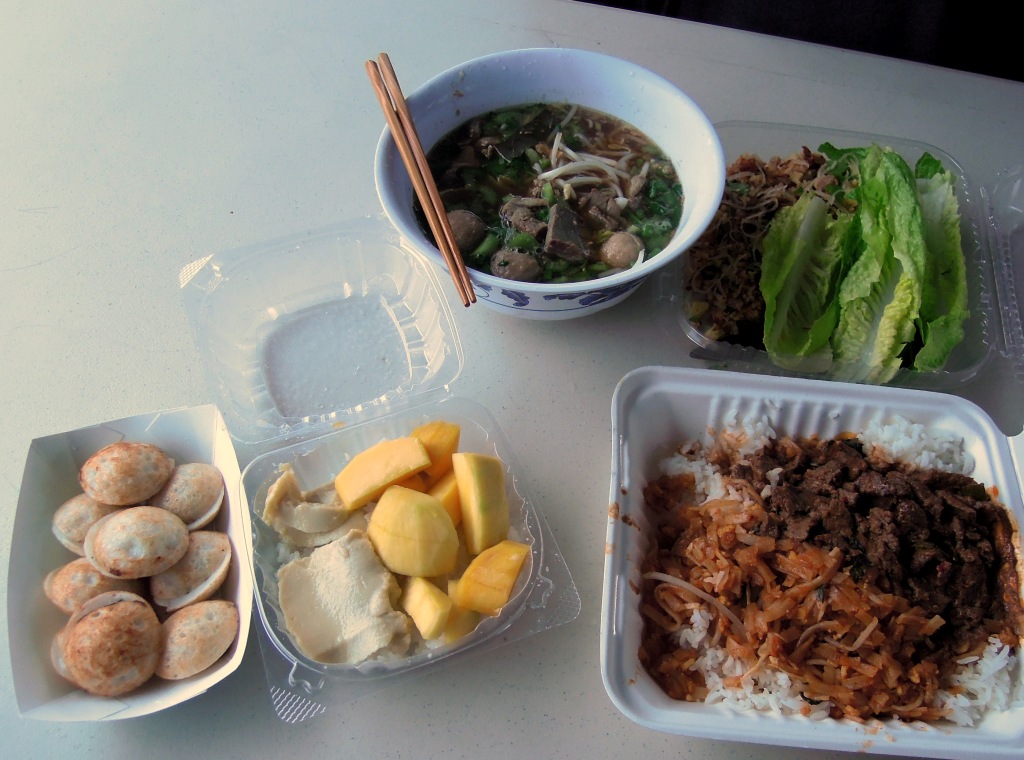 The kanom krok were also offered topped with cinnamon, but I opted for green onion. The first time I had this combination, in Tampa, I found it a bit strange, but the sweet-salty flavor and the creamy texture has grown on me.

I’m very happy that even though we’re no longer nomadic, we still live in a place where we can find new things to explore all the time. It isn’t just the food (although, as you know, food is a big part of how I travel!). It’s also the experience of doing something I haven’t done before, learning something new, and taking that feeling of freshness and delight into my day-to-day life. And not only that, but it’s salubrious to revisit the feeling of being a newcomer: the mingling of uncertainty and eagerness, the reminder of all the things I don’t know.

—–
*I have never been a big fan of sticky rice as a snack/dessert (I dislike 八寶飯, Eight-Treasure Rice, for instance) but my Thai cooking teacher has changed my mind somewhat. Her sticky rice with mango is amazing. go back