(I’m revisiting our trip of two weeks ago!)

Istanbul is a fantastic city for food. It has everything from crowded outdoor markets to gleaming luxurious restaurants to every kind of street vendor, and since it’s located at the meeting of the European and Asian continents, it pulls in cuisines from all over both. The exchange rate is also very favorable for those of us coming from the US, so it’s even more tempting to go round tasting everything.

The last time we were here (two years ago), we ate our way through the city with the aid of Istanbul Eats (both book and website), but since we were still finding everything rather intimidating, we stuck most closely to casual eateries and breakfast cafés. It’s no hardship to spend a month eating döner, köfte, kahvaltı plates, mantı, and the various flatbreads, but after we got back I did feel that we’d probably missed out — like going to Taiwan and only eating dumplings, shaobing, and niu rou mian, or to Paris and only eating crêpes and sandwiches. So this time I decided to be more adventurous (moreover, after another year-plus of traveling, I simply am a more adventurous eater).

Here’s what I tried this time, that I didn’t last time:

I don’t know what this is called. It was basically baked noodles with butter and a mild cheese (something a little like feta). I got it from a bare-bones café at Beşiktaş pier, while waiting for the ferry to the Princes Islands. Conventional wisdom holds that the easiest thing a tourist can do is just point and order, but actually I hate doing that. Maybe it’s because I’m such a verbal person, but asking for food by pointing and holding up a finger feels like regressing to Neanderthal capabilities. So while ordering this item was about as elaborate as buying nachos from a gas station, it fell outside of my comfort zone!

And then there was Sıdıka, a cozy restaurant just a very short walk from our apartment. Our host recommended it, as did Istanbul Eats, and we liked it (and its location!) so much that we ended up eating there twice. 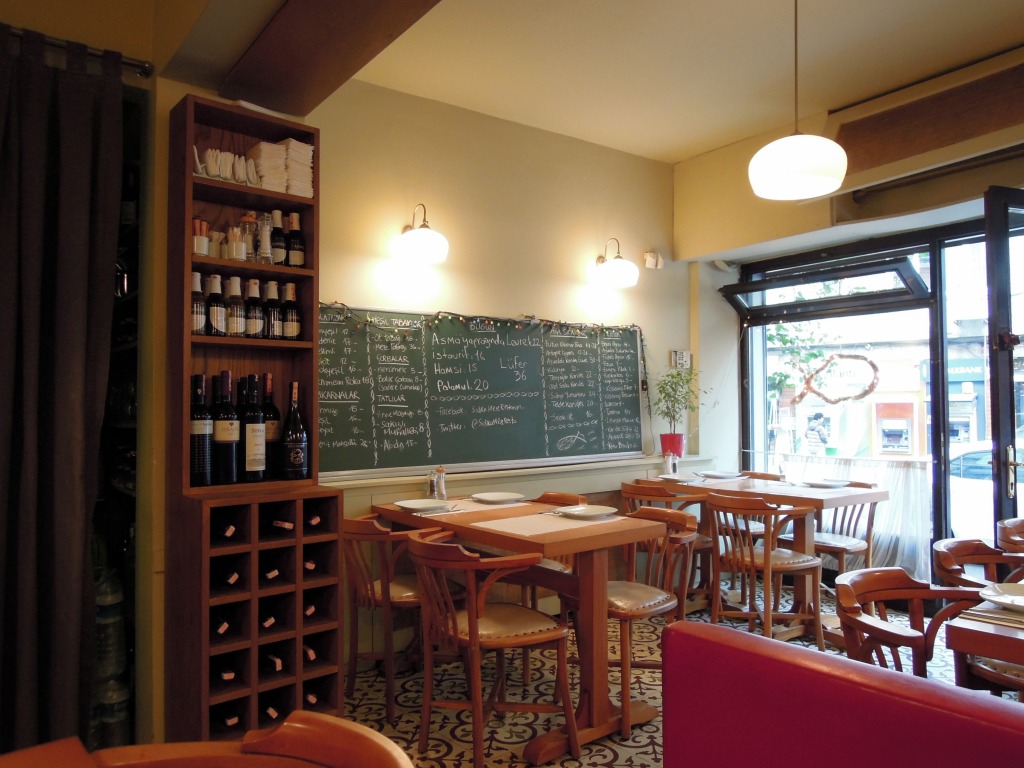 We have not been big eaters of meze, either while traveling or at home — at home because it’s always the same things on offer (hummus, falafel, baba ghanoush, tabbouleh), and while traveling, because the unfamiliarity and the wide selection are just too daunting. I suppose it’s how people feel when confronted with dim sum carts for the first time. But this time, we went for it.

Cold meze, to eat with bread: fava purée, octopus. (Octopus in Turkish is ahtapot. I love that.)

More octopus, this time grilled. It’s one of the restaurant’s signature dishes, and delicious. This one had a very faintly sweet sauce on it. I do feel there’s something slightly grisly about the two tentacles just sitting alone on the plate, but I know that’s because we’re not used to being served tentacles; two drumsticks wouldn’t seem odd whatsoever.

This dish, telde karides, does not appear on the English menu, which means a lot of travelers are missing out. That top crust is crispy browned shredded wheat, and then underneath there is a luscious, melting, tender center of little shrimp and some kind of creamy sauce.

I took this photo during our first meal here, and I must say, on our second visit the telde karides was not as good. It hadn’t been baked as long, so it was paler and not as molten in the middle. But the first one was perfection. 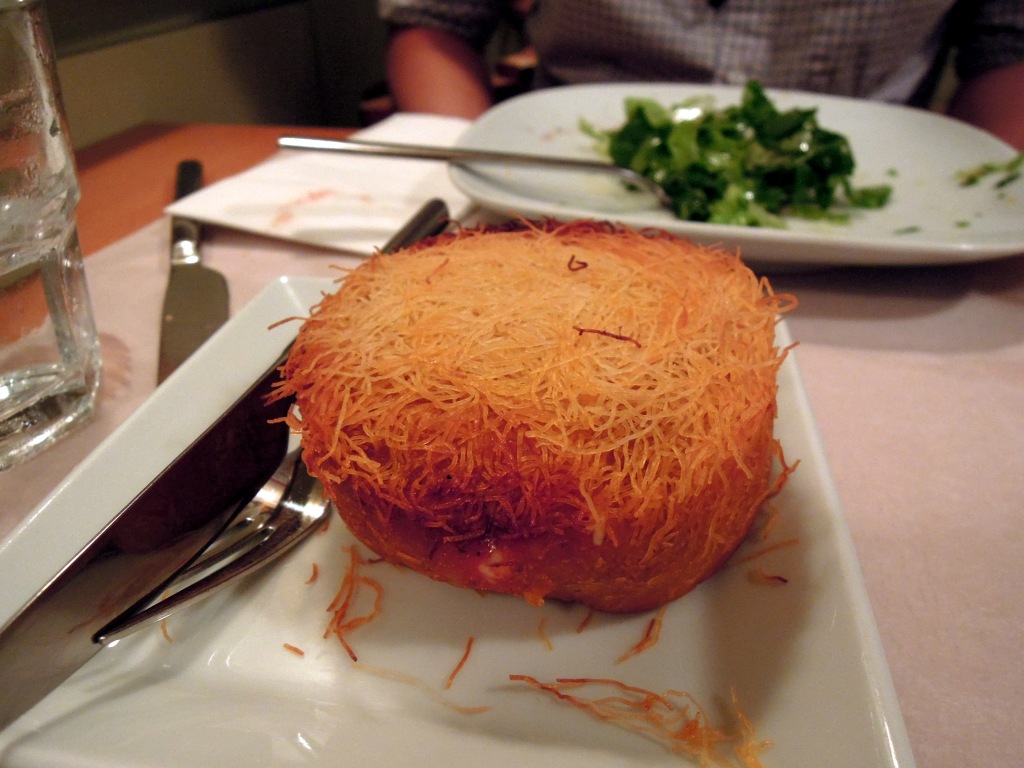 Dessert: mastic pudding (on the right) with dondurma, the rather chewy Turkish ice cream. I’d heard about mastic flavoring on our last visit, but never tried any. It’s an aromatic evergreen resin, native to Greece, used medicinally, culinarily, and in selected other preparations (the ancient Egyptians used it in embalming). I found it strange but wonderful, especially in conjunction with the coldness of the ice cream; it called to mind my mistiest mountain experience, this image in particular. That evocation of place was so similar to the first time I tried uni and felt as if I were eating not the ocean as a physical entity, but my idea of the ocean. 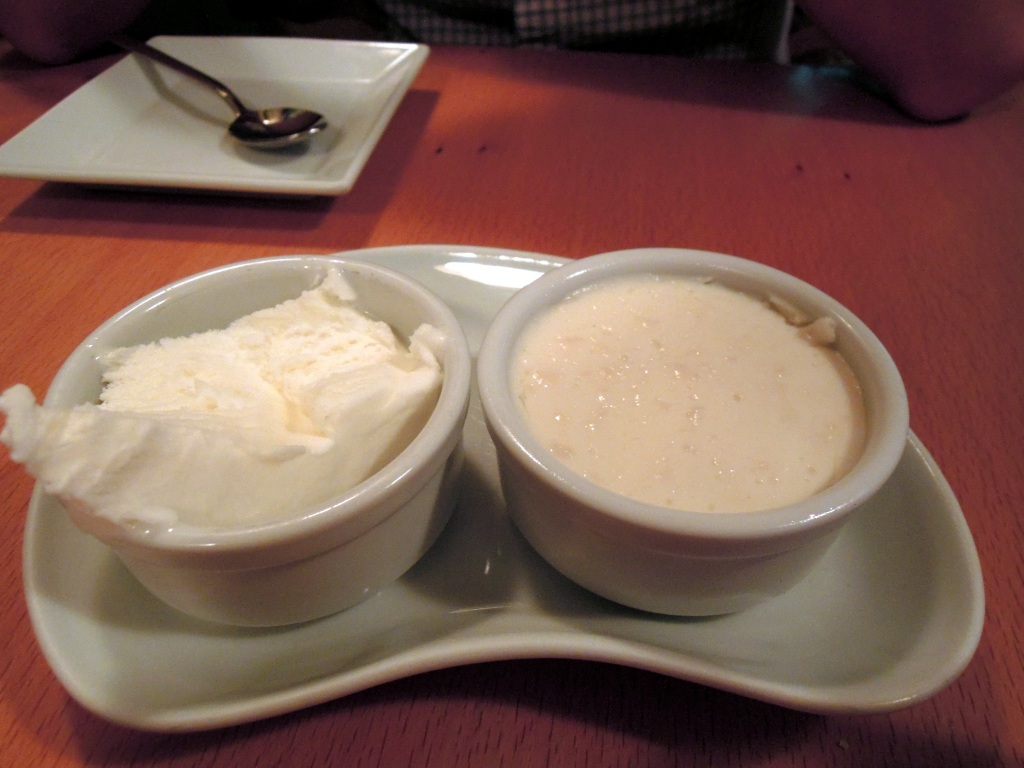 On another day, in a restaurant a couple of miles away, we had a chance to try something else I’d heard of last time and not tasted. Fıccın serves Turkish food as well as dishes from the Caucasus region. I’m not sure we sampled the most unique items on the menu, but we did enjoy this meat pie and the mantı (basically I can always eat mantı, just as I can their East Asian counterparts!).

Our most fun meal of the trip, though, was one where we were lucky enough to be mere guests, with no say over the ordering or even the choosing of the restaurant. This was the welcome/pre-wedding dinner of our friend Z, held at an elegant kebap restaurant overlooking the Bosphorus.

It’s fortunate that the restaurant has an easily recognizable logo because that’s how we located it. We had expected to take a cab there, but a driver informed us that traffic was too bad in that direction; he refused to go. So we went back to the apartment, where I changed my shoes and hastily rechecked the map, and then we were off walking downhill to the public tram. When we emerged at Kabataş station, I couldn’t tell exactly which intersection we were on, and everything was dark and apparently signage-less. I said, “I think it’s that way,” and pointed us down a badly lit street without many open shops. Although it was a busy road, it didn’t feel welcoming, and I was just thinking of turning back when I glanced down an alley and spotted a sandwich board with the restaurant logo; it was the valet stand. I went up to the two uniformed men standing there, pointed at the sign, and said (in English), “This restaurant. Where is it?” and they replied, accented, “Fourth floor,” and pointed toward a building behind them. The building in question appeared dimly lit and extremely old. I had to pull out my pocket flashlight to get us up the first two flights of stairs — steps of marble, centers worn deep from many, many feet.* It turned out there was also an aged elevator (the kind with the metal grille) but since it was so dark in there we hadn’t noticed. So we were extremely surprised when we came out at the fourth-floor landing and were greeted by warm light, a smiling host, and sleek décor.

After all that, we enjoyed a several-hours-long meal, a glorious view, and lovely conversation with new friends and Z and her family.

Talking over meze is so pleasant! I don’t remember what all we had, but there were cheeses and yogurt, various cold vegetable plates, hummus, and lentil köfte.

The restaurant bakes all its own breads, and we received quite the sampling! 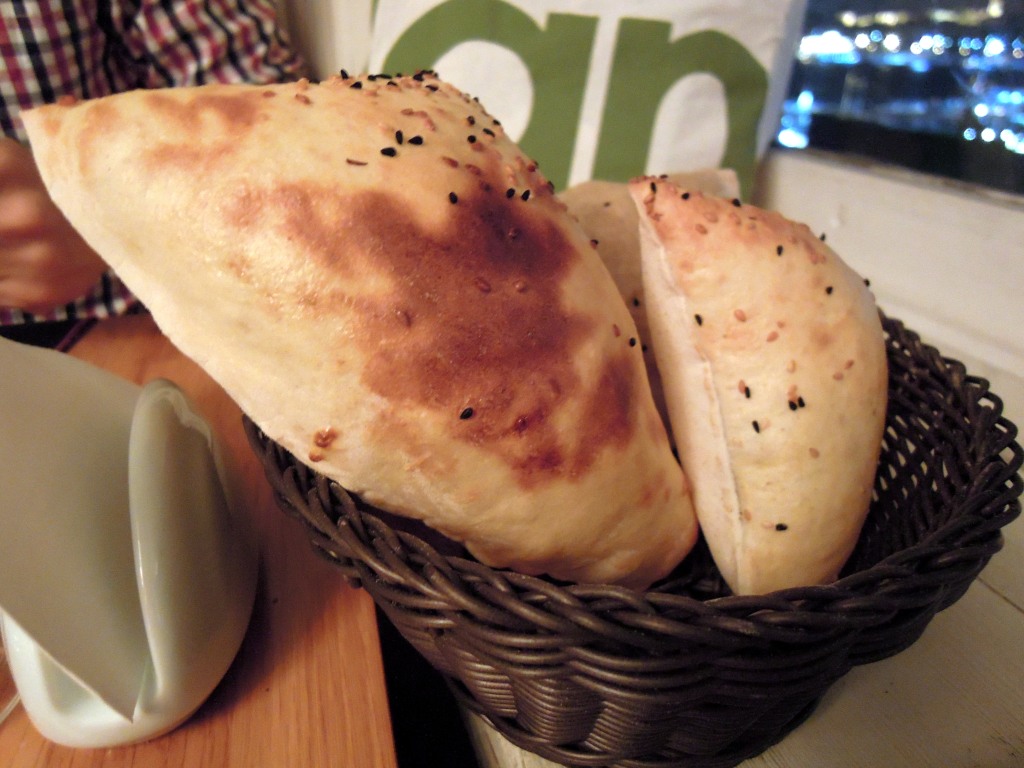 Individual mini börek, handed around by a waiter with a basket and tongs.

Çöp şiş, “garbage” şiş (pronounced “shish”) kebap, because it’s made of odds and ends of meat. I loved it because it was very fatty and flavorful. I didn’t put much on my plate to be polite and also to pace myself, but if I were eating this by itself, I could devour many times this amount!

More kebap: grilled meats and chicken wings, all served with very thin flatbread. I want this every day. Almost.

And two exciting desserts: some kind of pumpkin with walnuts and sauce (and more dondurma), and a melty (cheesy I think?) semolina cake (again with ice cream).

That meal was such a highlight, and not just of the trip. You know how there are some meals in your life where everything just comes together? (My friend Andrea was telling me about one such meal, just yesterday.) The food, the company, the location, the conversation, whatever journey you had to take to get there, whatever particular pleasurable note the evening strikes for you… everything was just right for me in that moment, down to the lighting in the restrooms!

(But not, perhaps, the lighting outside the restrooms — though this selfie gives you a sense of the ambience.)

That meal also got me craving kebap. A couple of days later, we passed a casual kebap eatery and went in. It was the middle of the afternoon and the restaurant was nearly empty, and we sat in the back room with windows overlooking, not a glittering nighttime waterfront this time, but an empty lot full of cats.

We ordered way, way too much food. But it was good. And they also brought us beautiful fresh breads, which we were unable to finish (sigh). 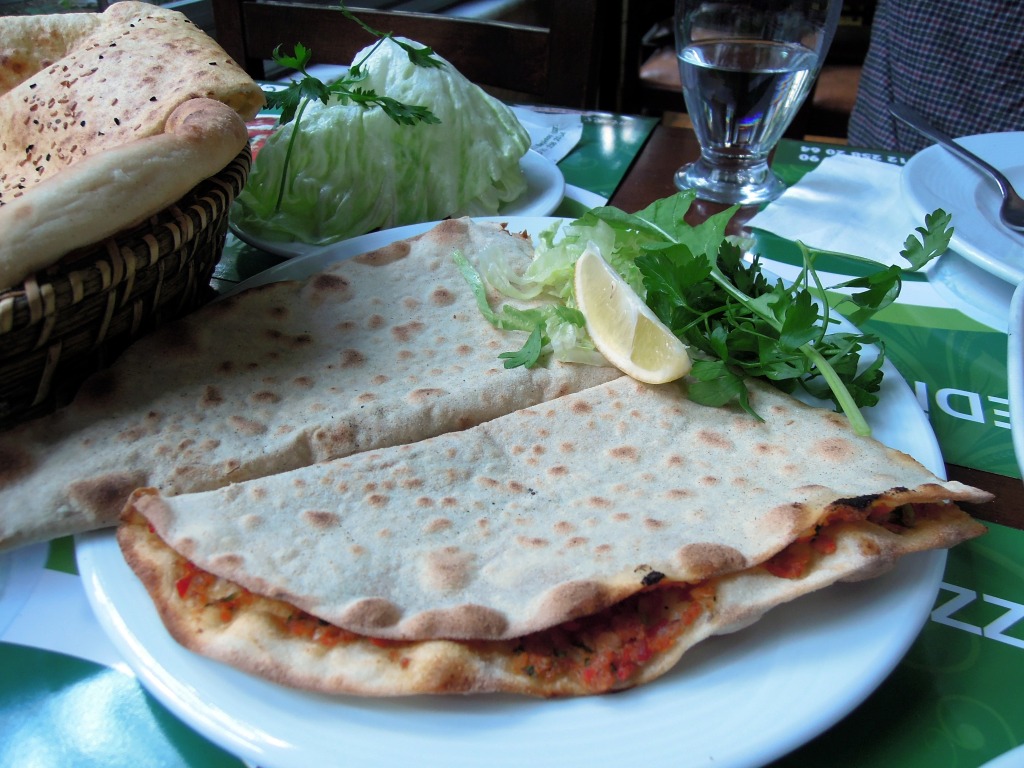 More çöp şiş, which I would never have known to order were it not for that previous dinner (and one of our new friends telling us what it was called).

I am thinking now about what people say, about food tasting best in its own country. Some people are snooty about it: “Oh, you haven’t tasted sushi until you’ve had it in Japan!” Some people say it with longing: “I miss the food my mother made in Thailand. I can make the same thing here, but it’s just not the same.” My feeling is that it is both true and not true. I have eaten remarkably good food in many places of the world, including here at home in California. Flavors can be reproduced. Ingredients (though not all) can be transported. The physical experience of eating is a transitory sensation at best: how well can you recall the precise taste of any given mouthful, the exact texture, even moments after it’s been swallowed? There is a futility about it, as food writers know; we are all attempting the impossible.

But. There is so much about food that is not physical. Terroir, that French concept that celebrates the place-ness of food, has its roots in the physical — soil, water, climate — but has come to mean something more. One cannot write meaningfully about food, or talk about it, unless one touches on those infinite aspects which have so little to do with the physical experience.** The company. The context. The journey. And this is why food, so often, does taste best in its own country, regardless of whether you were born there or are just passing through. It is not about what you are eating. It is about who you are in that moment and in that place, and that is not — though we may try — a reproducible experience.

—–
*From what I can gather online, the building is maybe a century old, which isn’t that ancient, especially in Istanbul. But I was impressed by the worn steps because there is a similar pattern of wear in the marble staircases in the main library of UC Berkeley, and those steps aren’t worn down nearly as badly as the ones at this restaurant. (Then again: kebap > books?) go back

**This is the same for all experiences involving the body, like sex — which is why this piece is so funny.