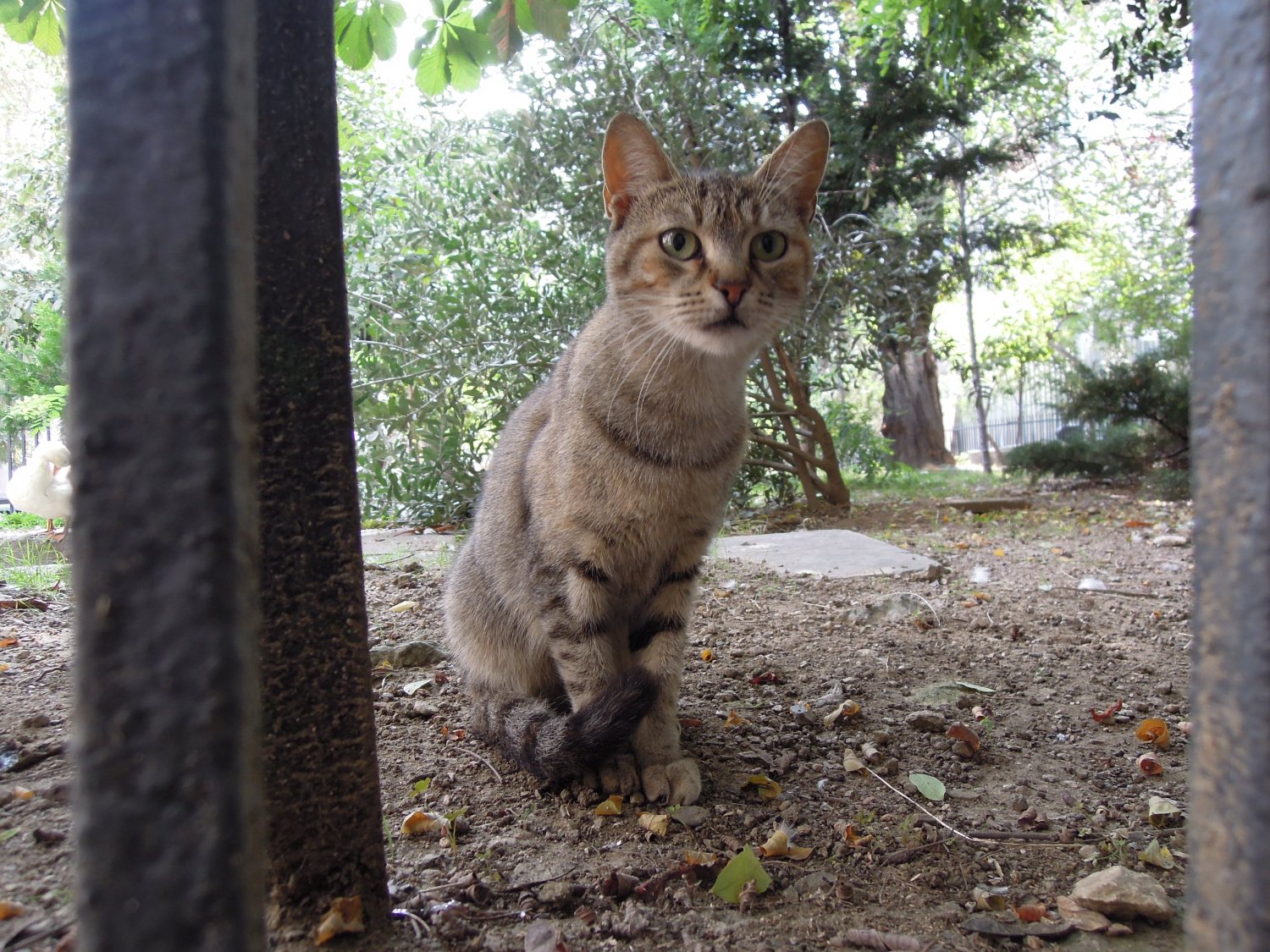 I thought I was my own boss, but jet lag had a different opinion. This morning I tried again and again to wake up, and I couldn’t do it. It was as if my body had melded to the mattress and my eyelids had stopped working. When I finally did get out of bed, around 1 PM, I only did so because I was afraid that if I slept any longer it would wreck my internal clock for the rest of our trip.

Outside the apartment, we were greeted by the usual contingent of kitties, and… fowl?! 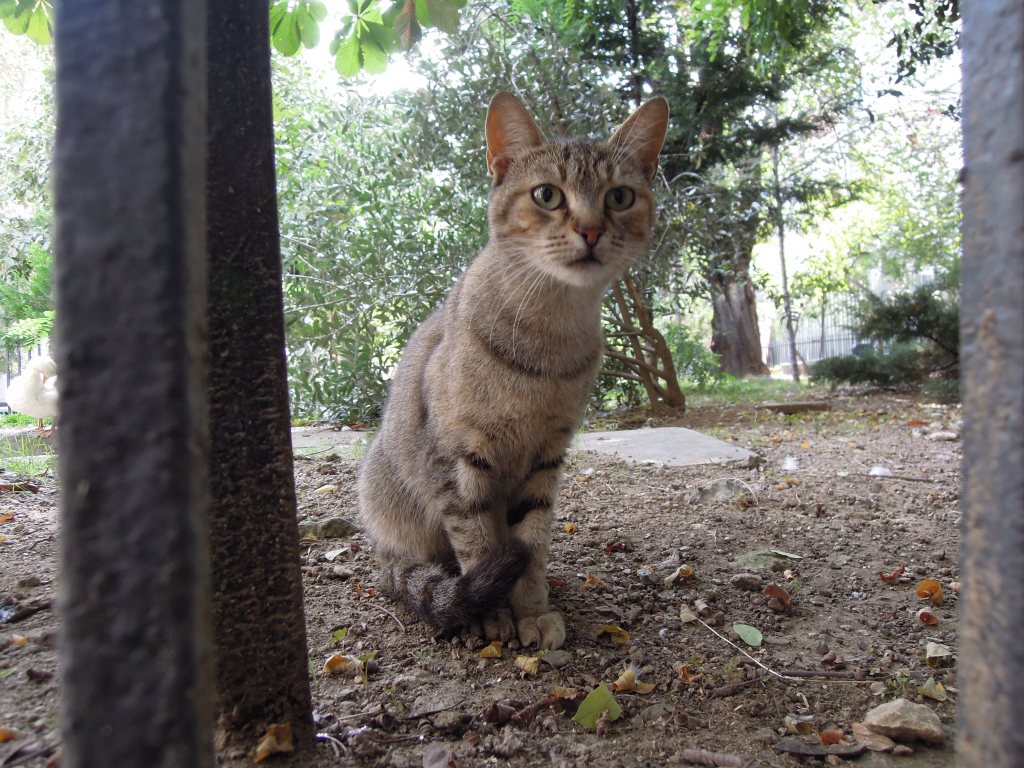 One of the most wonderful things about Istanbul is it’s perfectly reasonable to order breakfast at nearly any hour, if it’s the type of restaurant that specializes in breakfasty things. This morning we tried a different café around the corner from where we had breakfast yesterday (TimeOut Istanbul: “Çelebioğlu Sokak pretty much exists just so that Beşiktaş residents can eat breakfast“). I love their place mats; however, in spite of their restaurant name, they don’t have an English menu. Many places don’t, but we always get by, either with help from the staff or our own piecemeal knowledge of Turkish food words. This time we ordered the breakfast spread for two. (Longtime readers will remember my many Turkish breakfasts from our 2012 visit — or my recent attempt to re-create one in Oakland!)

By the time we finished our “breakfast” it was nearly four o’clock, but whatever. We walked the few minutes to the naval museum (Deniz Müzesi), paid our 6 lira apiece (less than $3), and spent the next hour examining the shiny gilded caïques of the sultans. I made sketches. 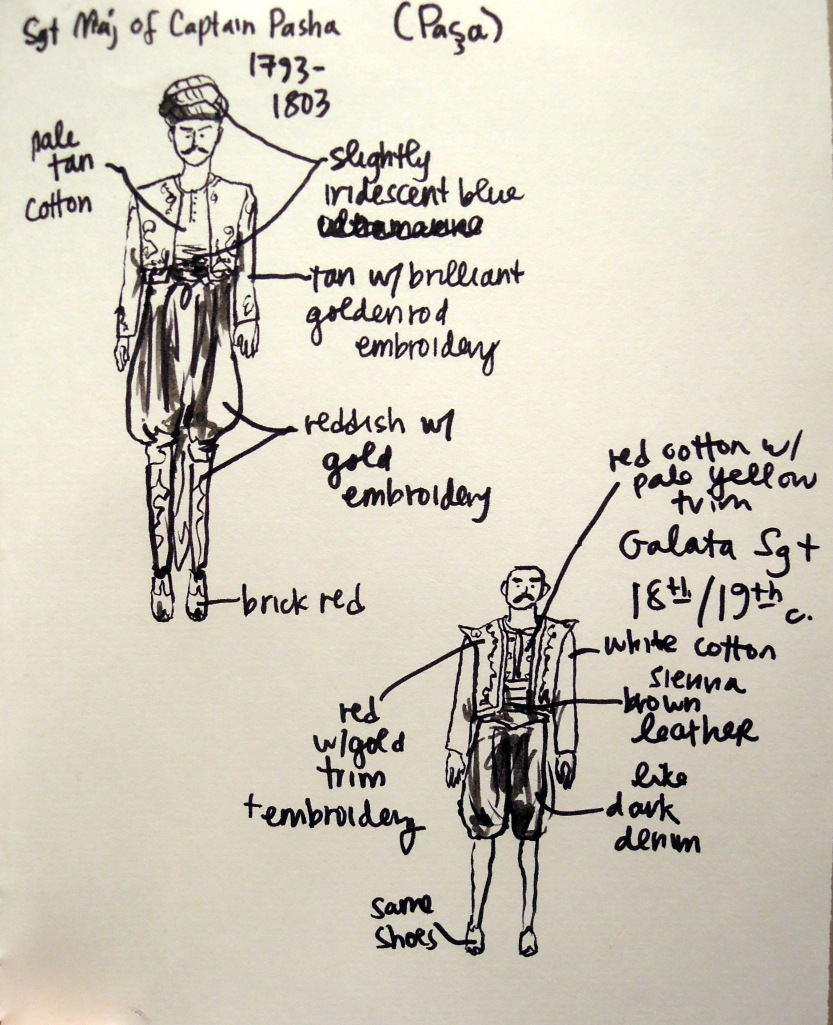 The Naval Museum is appropriately located on the waterfront, so after our visit we went around back and joined the many locals enjoying the view. People threw bread to the fish; we watched one large piece bob around the surface, shrinking in rapid movements as a cluster of fish tore off bites. It was fascinating and a little scary. (You might need to click on the photo to enlarge it and see the fish.)

At first I’d been thinking I might sketch the Asian side of the city, across the water, but after awhile I realized the boats would be more interesting — especially after drawing the ones in the museum. I was also pleased to recognize the not-so-towering Maiden’s Tower. 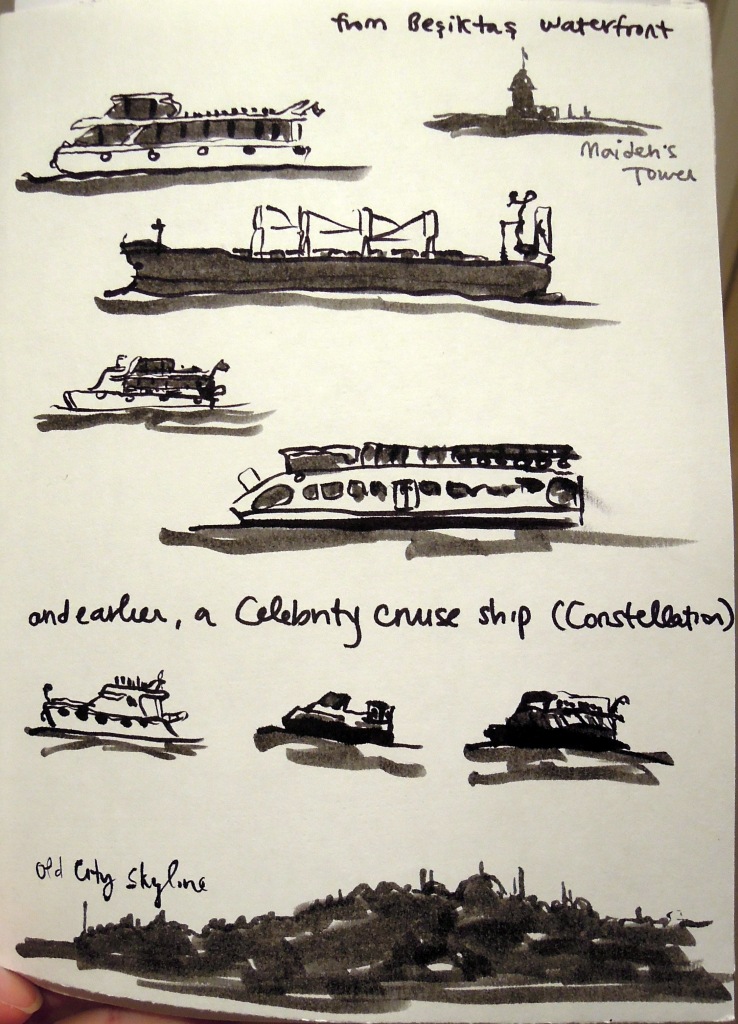 Just after I finished this sketch and closed up my book, a ferry docked nearby and sent a sheet of water splashing toward us. I’d been sitting with my feet sticking out and my boots got water all over them; as I scrambled up, another wave sent water right over the edge of the concrete wall itself. Everyone was jumping up and rushing off the wall; girls shrieked the happy dismay of getting mildly dampened on a nice day with their boyfriends next to them. It was the kind of unexpected occurrence that is more diversion than any real annoyance (unless you happen to be dressed up — or have your sketchbook in the line of fire, which I didn’t).

After that we went for a meandering walk around the neighborhood. I’d suggested to Erik that we could find a bus and go elsewhere in the city, but he pointed out that buses would be jammed during rush hour, and said, very reasonably, “Unless there’s something particular you wanted to see in some other area, we can see just as much here as we can anywhere else. There’s no point running around just because you’re afraid you’re missing out.” I thought for a moment and realized he was entirely right. So we followed Ilhamurdere Caddesi (street) past the restaurants and bakeries (pastanesi) and shops selling chicken and eggs (köy yumurta = village eggs), then the shops selling bedding and cooking pots, and then there was a park that went uphill so we went there and passed a group of men talking and then a group of middle-aged women in flowered headscarves doing knitting and then a dog who barked and dodged through traffic to join another pair of dogs on the other side of the street. Then we turned around and went back along a different set of smaller streets.

There wasn’t anything to see, per se, on these streets, unless you count the cat who leapt up and bawled us out when Erik greeted it. (My translation: “What the f—, dude?! What the f—! Did your mom not teach you manners? You can’t just sneak up on people like that! Get out of here!” Not exactly an attack, but definitely ready for a fight!) But I remembered a similarly aimless wander around oddly similar streets in a random neighborhood of Kyoto, and the memory made me happy. Often when we travel, I worry that we’re somehow not doing it right, that there is a right way and we haven’t mastered it. But this is what we do — the aimless wander — and it isn’t a universal skill; we’ve mastered it, at least to our own satisfaction. (It is, alas, not a pursuit that is safe for everyone in every place.) It is the very nothingness of the aimless wander that makes it special; it offers a different sense of place, one inaccessible in the busy urban centers and tourist hotspots. This is also why we like staying in people’s apartments when we travel: there is a lived-in quality to local residences that you can’t find in hotels.

When we got back to the busier part of Ilhamurdere Caddesi, we went into an intriguing-looking shop that turned out to sell dried fruit, nuts, herbs, spices, loose tea, and some beauty products and soaps.

I was a little intimidated (as usual), but one of the young shop employees spoke enough English to convey that we could sample freely. I bought dried jumbo apricots and white mulberries. 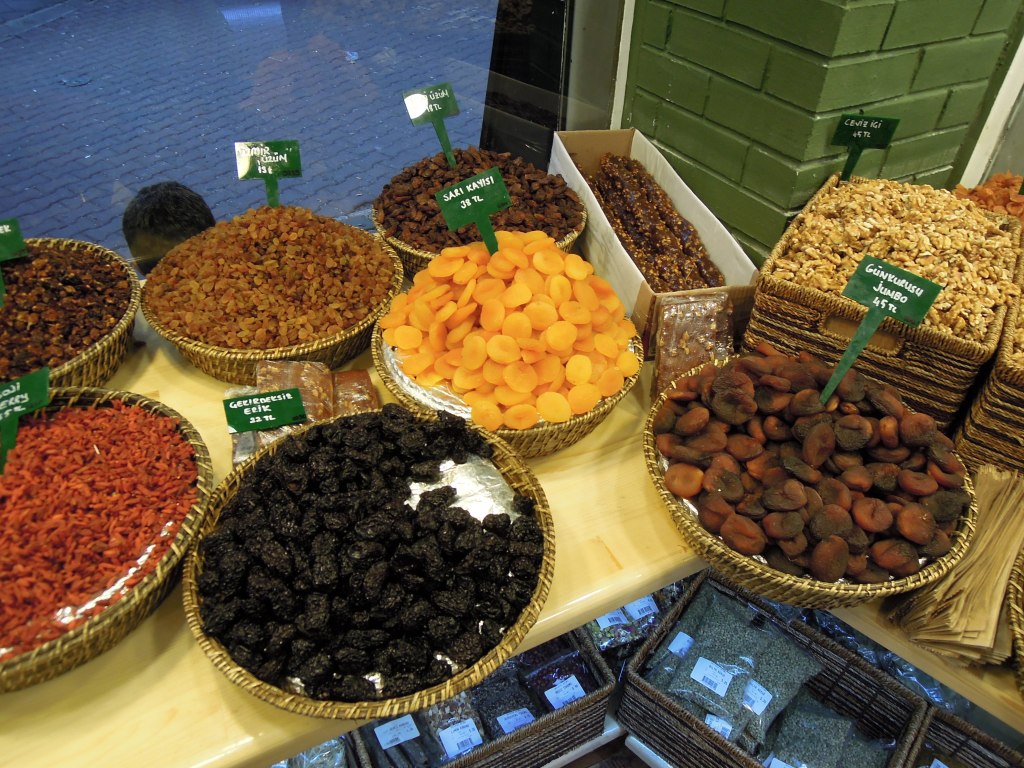 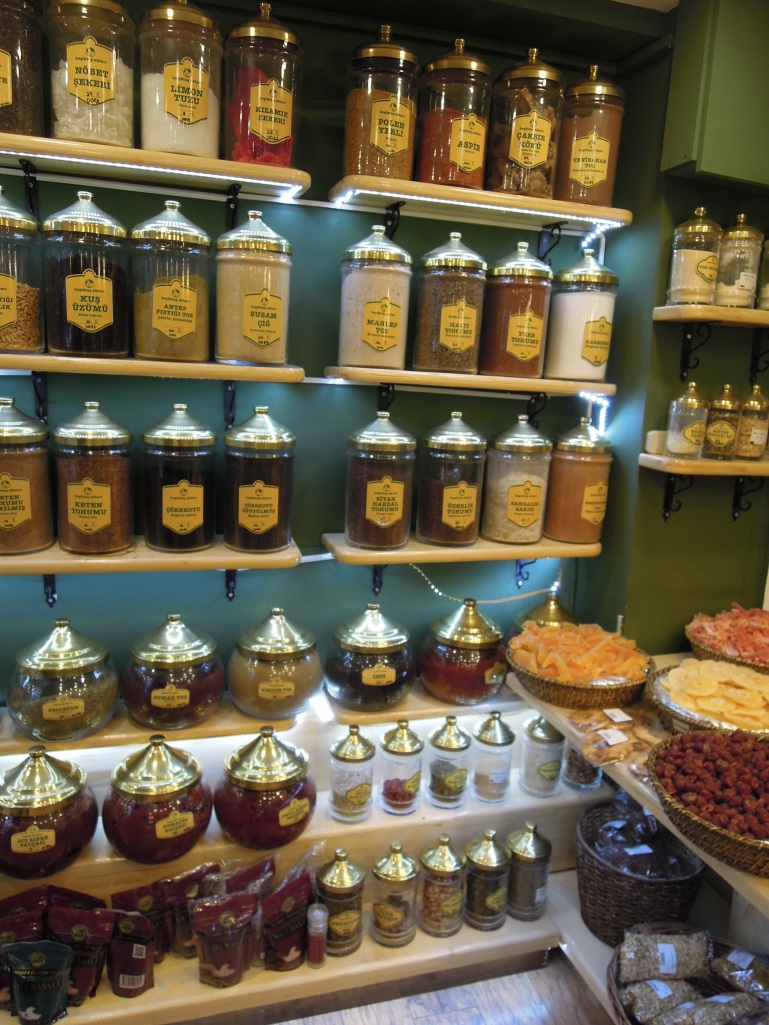 After that, we also went into a tiny eatery on a small side street, run by an older couple and maybe their daughter. None of them spoke any English, but they were possibly the most welcoming shopkeepers we’ve encountered. Eventually it became clear that they were closing up for the evening and only had a few dishes left, so we decided not to eat there. But I’m so glad we went in. They were so nice.

We ended up at a café called Kirpi, where the resident tortoiseshell cat eyed everyone hopefully, and the English menu indicated that “kirpi” means hedgehog (I was totally confused by the Hedgehog Breakfast option until I made this connection!).

I had saray (palace) mantı; the waiter was briefly concerned that I might not know it had garlic in it, but I said that was okay. Then he went back into the kitchen and I watched the cook hand him a clove of garlic and a press. 🙂 The mantı came out of a package in the freezer, but I didn’t mind; this wasn’t a mantı specialty restaurant, and anyway, last night we noticed a mantı shop in the area that sells its own frozen mantı, so maybe these came from there. Anyway, I enjoyed them. 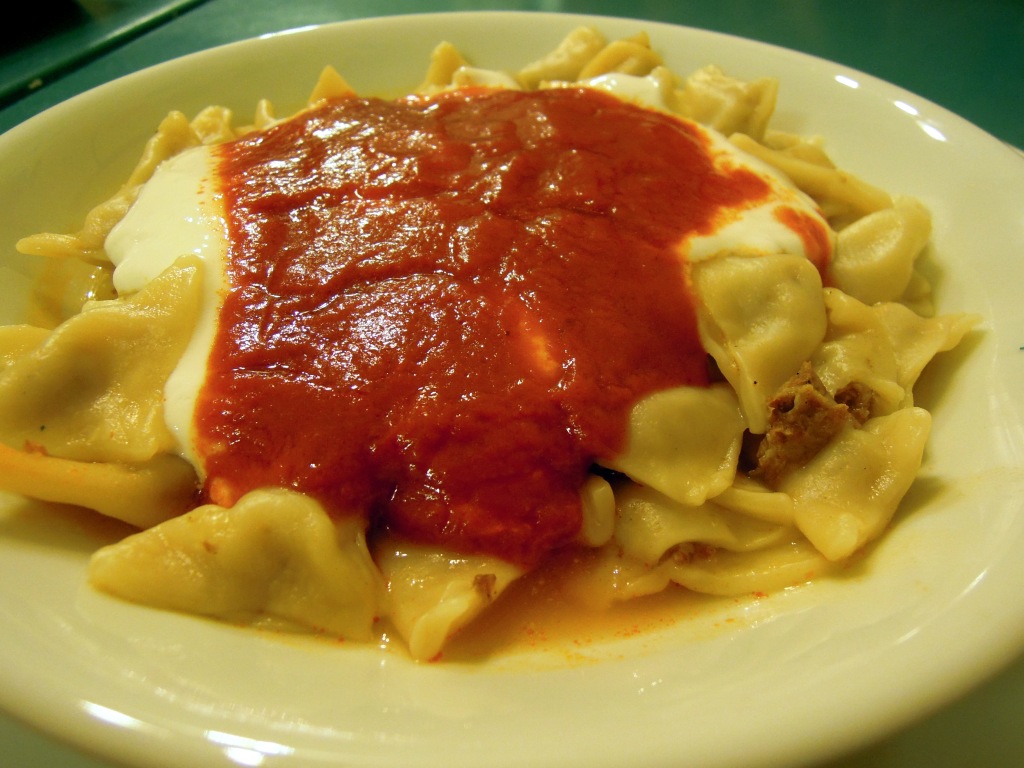 Erik ordered izgara köfte, but they were sold out, so he got içli köfte instead. We are very fond of köfte, though we’d forgotten what the different kinds are. Içli köfte are what other cuisines call kibbeh, basically ground meat wrapped with bulgur. 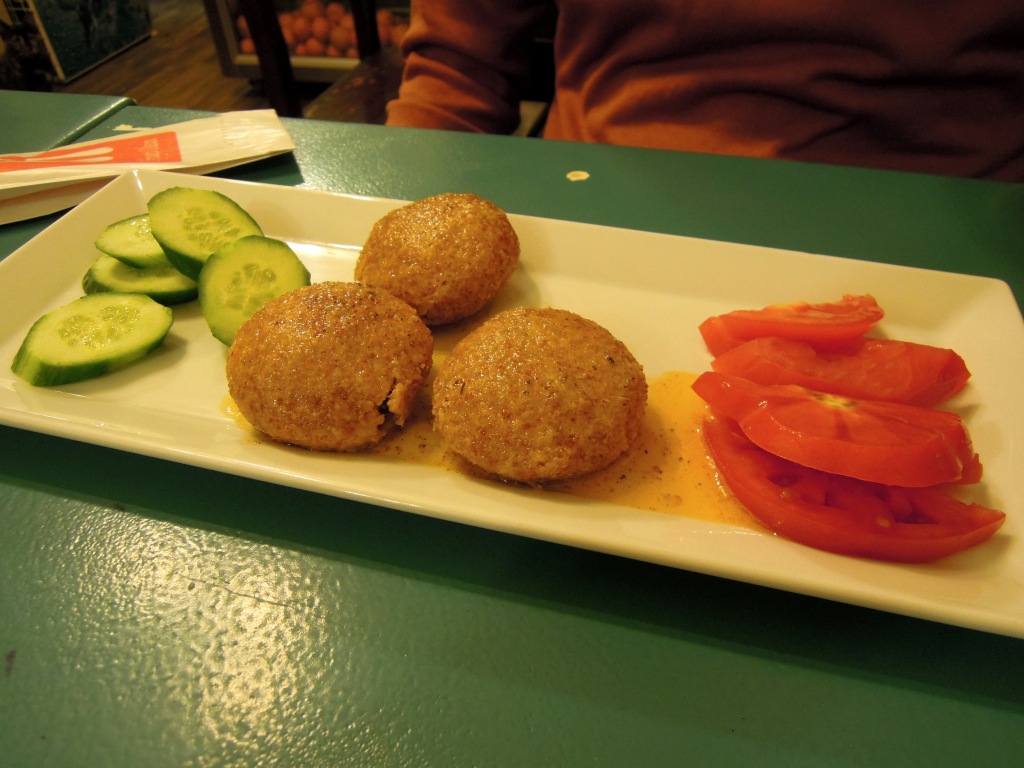 It was a pleasant day of reasonable quiet and several small adventures: good reinforcement that I can do nothing and know next to nothing and still have a lovely time.

Tomorrow, if I can get up early enough, we might have a bigger adventure. We’ll see!