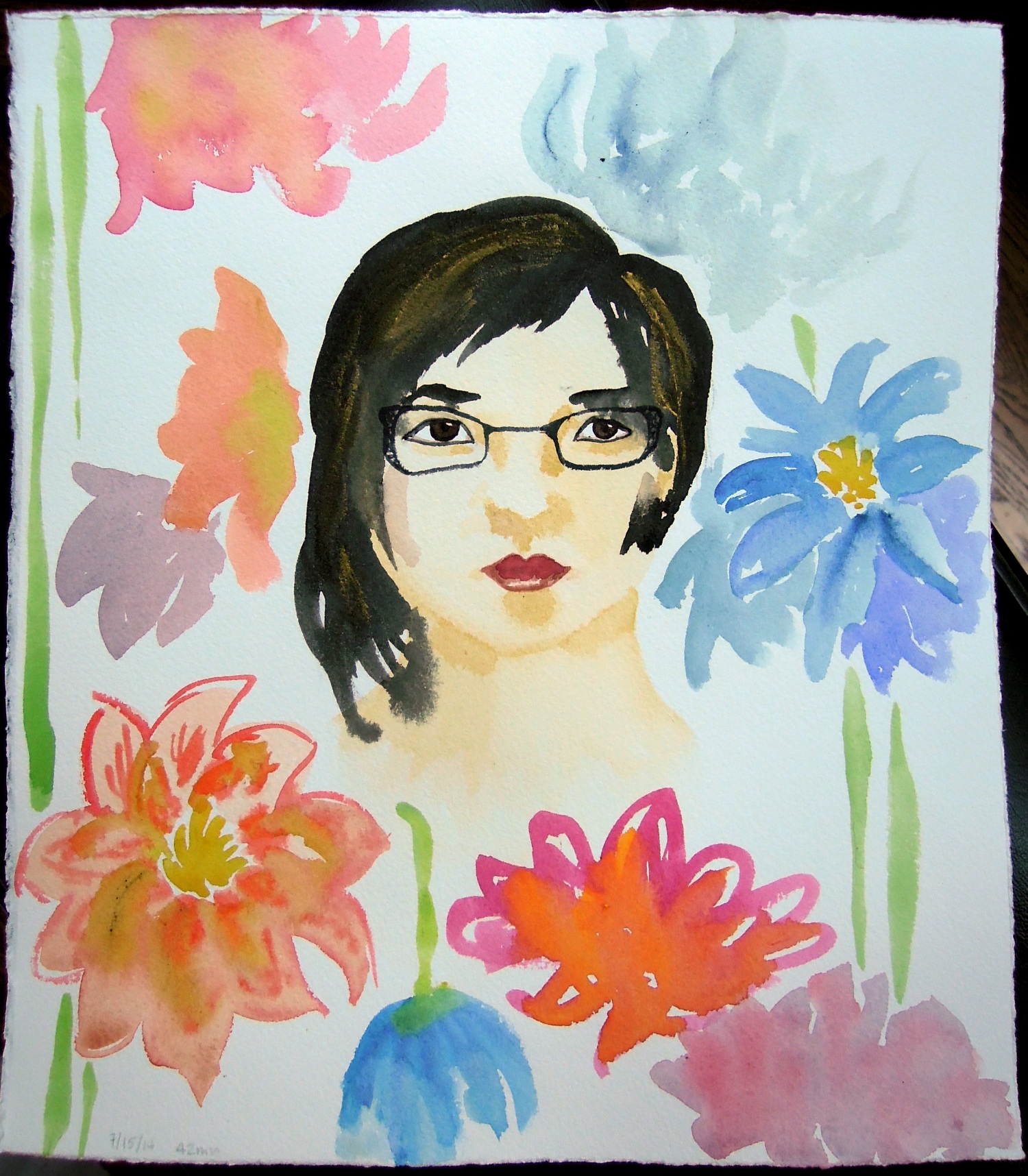 I’m finally feeling better after my week and a half of illness — as evidenced by my eating too much at dinner last night, and then wanting to paint. Both very normal (for me) activities which sound utterly unappealing when I’m not well.

I took to my desk and decided to paint a self-portrait without benefit of a mirror, a thing I’ve done once before with interesting results. When I don’t worry about resemblance or proportion, I can make something that more closely reflects my mental state — and also I feel more free in general, because I’m not focused on accuracy. This is what I made last night:

It’s also worth noting that I spent the entire painting session listening to Nirvana’s Unplugged concert. I’ve long had a couple of songs from that set on my playlists, but when I read this on the Kurt Cobain Wikipedia page*, I wanted to hear the whole thing:

Nirvana’s acoustic Unplugged set, which was released posthumously as an album in 1994, may have provided a hint of Cobain’s future musical direction. The record has drawn comparisons to R.E.M.’s 1992 release, Automatic for the People,[22] and in 1993, Cobain himself predicted that the next Nirvana album would be “pretty ethereal, acoustic, like R.E.M.’s last album.”[20]

“Yeah, he talked a lot about what direction he was heading in,” Cobain’s friend, R.E.M.’s lead singer Michael Stipe, told Newsweek in 1994. “I mean, I know what the next Nirvana recording was going to sound like. It was going to be very quiet and acoustic, with lots of stringed instruments. It was going to be an amazing fucking record, and I’m a little bit angry at him for killing himself…”

I was too much of a self-identified “good girl” (and probably just too young, in general) during the early 90s to be openly listening to Nirvana, but I remember the much older boy across the street blasting “Lithium” from his window, and being drawn to the music even while confused by lyrics like “I’m so ugly, but that’s okay ’cause so are you.”

Anyway, if Nirvana has any influence on this self-portrait, it’s not immediately apparent. What’s striking to me is the “floating head” aspect — disconnection from the body — and the sense of stillness amid the tumbling flowers. I also like the metallic gold dust in the hair, though I’m not sure it’s discernible in the photo. When I sat down to paint this, I felt happy, but the happiness of painting is a complex creature; there’s a lot more there than simple pleasure, and I think that comes across in the portrait, which to me shows peace and turmoil at the same time.

I’d love to hear how it reads to you.

*I also learned that Kurt Cobain was a Lead Belly fan, which makes me happy. My favorite song off Unplugged is his cover of “Where Did You Sleep Last Night.” go back