When I was younger I had a notion that the potential for great achievement was something you either had or didn’t, like double-jointedness or the ability to wink.* This was, of course, before Carol Dweck’s theory of the growth mindset. My parents subscribed me to National Geographic World, which had a regular section called “Kids Did It!” that featured kids’ outstanding achievements: starting a citywide recycling campaign, for instance, or saving someone who was drowning. Clearly these stories were meant to inspire, but for me, they only confirmed my belief that those kids had something I never would.

A really big part of my creative journey over the past seven or so years has been unlearning this mentality, erasing the many years of “art is not for people like you” engraved on my brain. I still fight it every time I do something badly; my first reaction to possible failure is always to make like Don Music and bang my head on the keyboard, wailing, “I’ll never get it, never, never, never!”

I love that I have friends who are doing work that makes me feel excited, that fills me with a great boundless sense of aliveness and gratitude for that aliveness. A lot of creative work is solitary, unremarkable, emotionally fraught. I was just reading Toni Bentley’s diary of being a corps dancer in the New York City Ballet, and it reminded me just how much agony lies behind every one of those miraculously suspended jetés. Not that most of us work as hard as young ballet company dancers, but still, there’s a big difference between what “audience” sees and what artists see. So every now and then, when I get to experience an end product (or even an intermediary product, like a polished draft) of a friend’s long creative process, it’s like… “oh, right! That is what we’re aiming for!” It makes me want to do dance leaps myself. I used to, after going to the symphony, but now that my body is older, I’ll have to think of some other way to express my joie de vivre after being moved by art.

I originally meant to say only that I was reading Stacie‘s and Alejna‘s blogs this evening — both of them have been posting prolifically recently — and they inspired me, as they usually do, to come here and post something of my own. So thank you, ladies. You inspired quite a lot more than I originally intended to write!

I made this last week for my sister Sarah’s birthday: 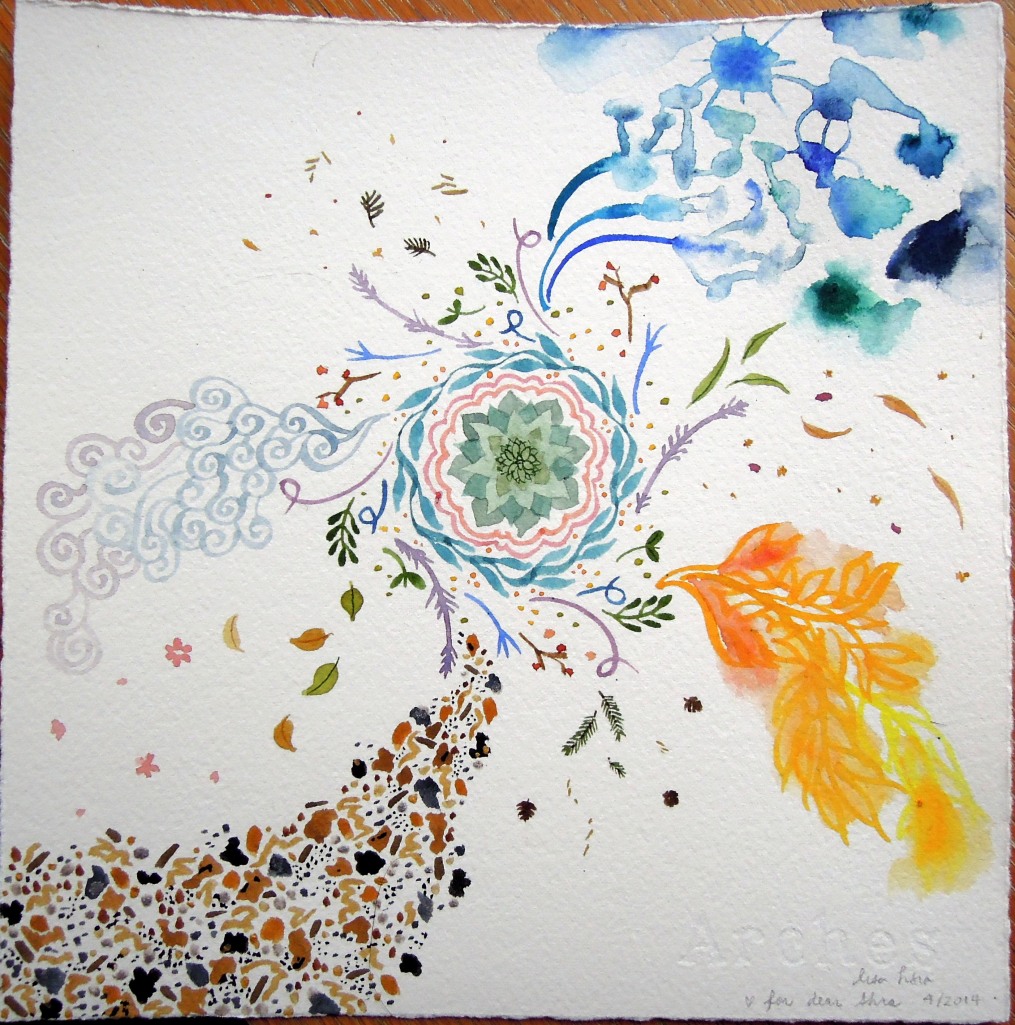 My mandalas seem to get more and more deconstructed each time. I very much like the breeze-blown-plant-matter effect of this one. Inspired by allergy-laden spring pollen!!

I went for a walk this evening with one of my former college TAs, Rachel, who is quite an inspiration in her own right. Seems like she’s done everything from joining the Peace Corps to being a university professor, and probably dozens of other things I know nothing about. We walked around Lake Merritt, which is a more than three mile walk, and talked about family histories and life drawing. And I admired the light and reflections on the water.

*I can’t wink, meaning I cannot close either eye individually. I can only do both at once. It only occurred to me last year to ask an ophthalmologist about it, and after triple-checking what I meant, she said, consideringly, “Yes, that is uncommon. But it’s not pathological.”

**I also adore his name.