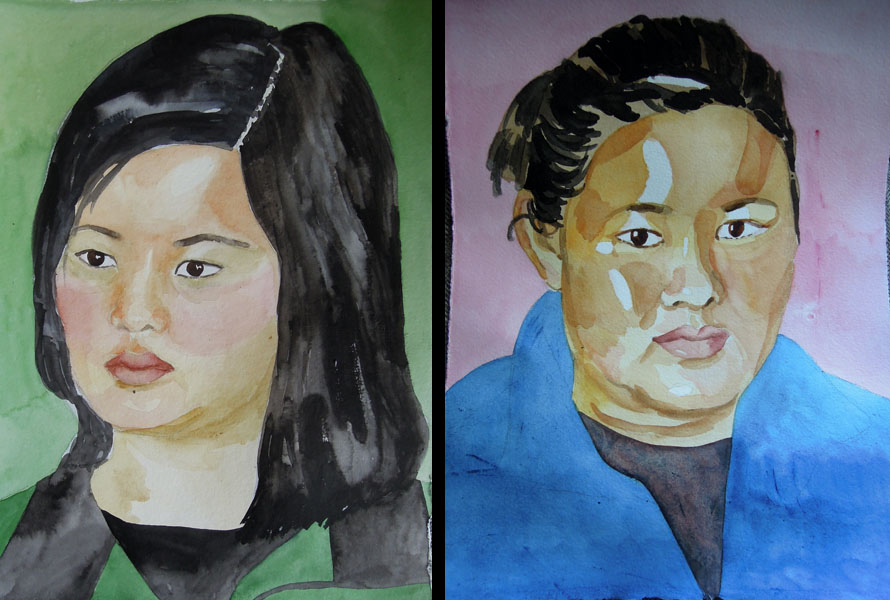 After doing more portraits and improving dramatically with each one, I felt bad for Erik and my sister Allison, since they sat first and therefore ended up with the worst portraits. So before leaving San Jose, I asked Al if she would be willing to sit for another attempt. She said sure.

I was determined to do a more accurate pencil sketch this time around, since the first one came out so distorted. Al said, “I think I have a lumpy-shaped head.” I don’t know if that’s true, but I certainly had trouble. I probably spent at least 40 minutes on the drawing alone, and if you look carefully at the animation below, you’ll see that I altered the pencilled outline of her face before I added the first touches of paint.

Here’s the finished portrait, a bit distorted once again (though this time because of buckling in the paper):

And a side-by-side comparison with the first one, done about two weeks earlier:

Do they look like the same person to you? They’re both distinctively Al expressions, but I did the skin tones and shading so differently, I don’t think I’d recognize them as the same person if I didn’t already know her.

I’m in Florida now, with our dear friends Ying and Ståle, and as usual, the change of scene has my habits a little askew — not that I had a routine, but what routine I had now feels like it needs to be restructured. That sentence barely makes sense, but all I mean is that re-settling in a new location, even when the transition is smooth and easy, changes my perspective enough that I feel I have to learn how to use time all over again. It’s a bit annoying, especially the accompanying self-doubt and criticism (“why am I so incapable?”), but it also keeps everything fresh. We’re enjoying being with our friends. And I have promised to paint something for their walls, so there will be that.