Last weekend the artists of Fort Point opened their studios to the public. More than two dozen artists in our building participated, including our next-door neighbor Jim Shea, who makes gorgeous pottery. I wasn’t going to do anything for the event because (a) we’re only subletting so it’s not our studio space, (b) I don’t have that much work with me here, and also, if we’re being honest, (c) I secretly feared the more established artists would hate me for crashing their party. But the more I thought about it, the more I felt that to do nothing would be letting a cool opportunity walk away. So I took my two current sketchbooks to a color copy shop, painted some signage, bought a new roll of painter’s tape, and set up a little display in the hallway.*

Open Studios ran from Friday through Sunday. On Friday evening I stayed in the apartment and worked, but left the door open with a note saying, “The studio is closed but I am in & happy to step out & say hi!” This wasn’t the best idea; most people were expecting studios to be open (duh) so they simply walked in without noticing the sign, and then I had to explain that there was nothing to see inside. It made them feel silly, and me too. And I don’t think any of them stuck around to check out my work — they’d come to see studios, and so they just moved on to Jim’s or someone else’s properly open studio. 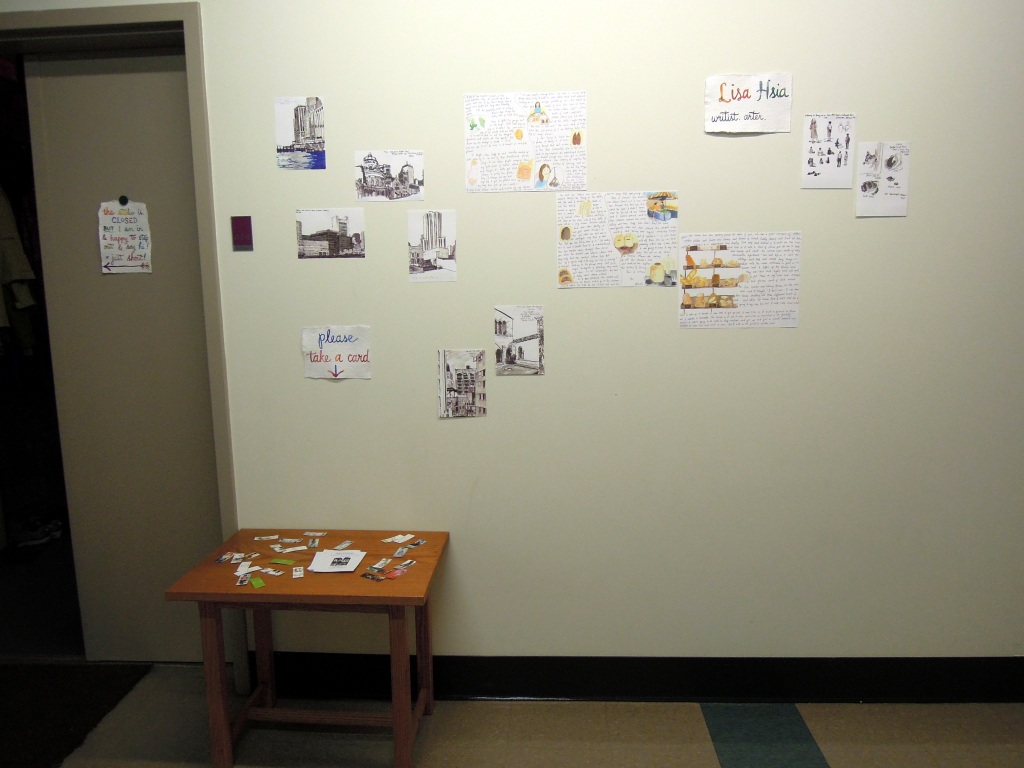 Still, on Saturday I prepared to do the same thing. I put out the sign, opened the door, and settled at the dining table for an hour or so of writing. Then I decided to switch to sketching, and realized I could do that just as easily outside of the apartment. It felt a bit like putting myself on display as well as my drawings, but on the other hand, I could actually interact with people when they walked by, instead of hiding inside and waiting for them to reach out to me (which, as I said, didn’t really happen anyway).

Our across-the-way neighbor put up a beautiful installation of balloons and electric fans: the air stream from the fans kept the balloons in midair, as if by magic. I enjoyed it all weekend, and it was a fun thing to try to draw. Images are static but the balloons were constantly in motion, bobbing and rotating and floating up and down. 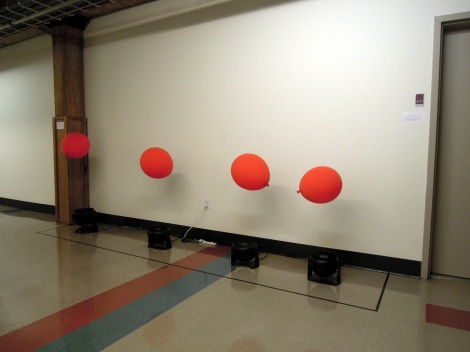 It’s always a slightly awkward business, showing at events like this. I haven’t done an open studio before but I have done several craft fairs, and it felt really similar. You want to be friendly and accessible, but not come across overly eager or intrusive — however, one person’s friendly is another’s pushy, so really, you can only be yourself and hope for the best. (Actually, that’s probably what makes it scary.) I always find my introvert and extrovert sides at war when I put myself out in public like this: I’m simultaneously terrified, and excited to talk to everybody. I imagine some people walk by and think I’m disengaged and standoffish, whereas with other people I really open up and we have a conversation.

Anyway, I’m not sure I even need to worry about it, because passersby seemed to fall into three camps. About a third of people just walked right by without even looking at me (or at those fantastic balloons, what?!). Another third kept walking but gave a token hello and maybe a glance at my work.** And the last third actually stopped, looked/read, and talked to me, and those people were pretty much all wonderful. They made all the downtime worth it.

On Sunday I woke up super-early and decided I was going to get a little further out my comfort zone, and ask people whether I could sketch them. I’ve always wanted to do this but have never dared. I wanted it to be practice for me, but I didn’t want to take up too much of people’s time (or give away too much of my own), so I kept the sketches to one minute each — a good challenge. I was very nervous about this, and for the first couple of hours I let a lot of people walk by without saying anything. But this young woman was so sweet and lovely, I didn’t mind asking her. I think I went a little over a minute but I really like the sketch. 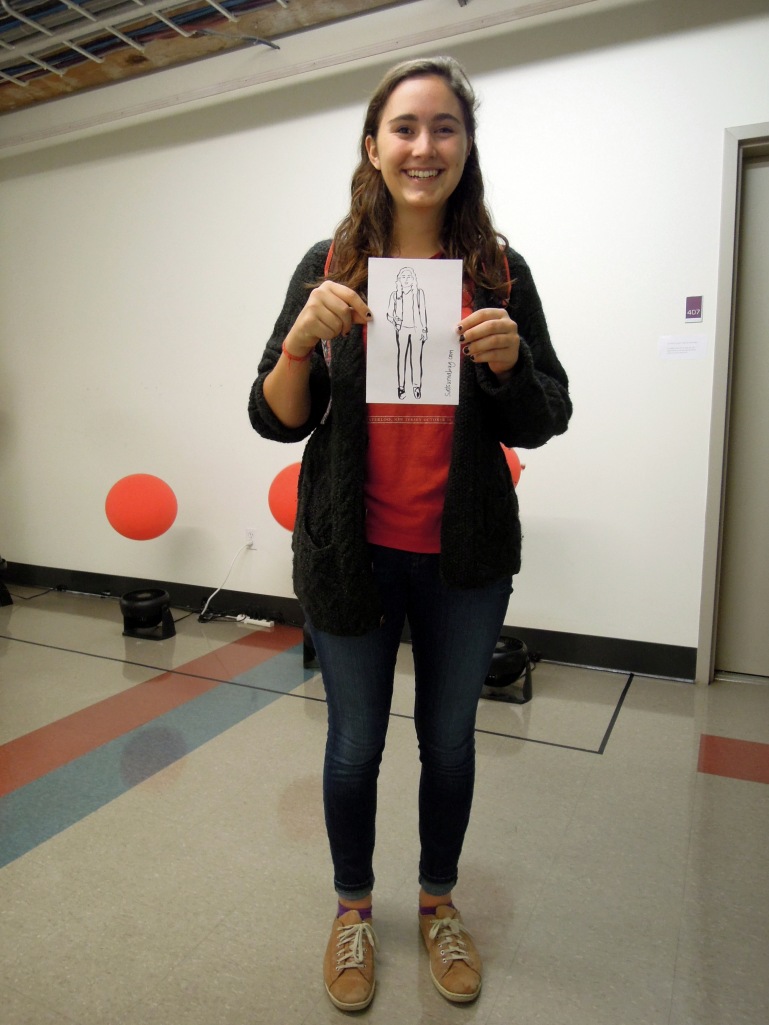 My next subjects were a cool couple who told me afterward that they’d been looking for artwork to put on their walls. I exaggerated her nose too much and his hair didn’t come out right, but hey. I was going to ask for everyone’s names but asking for the sketches (and photos, and permission to share on the blog) was nerve-wracking enough; I chickened out. But I seem to remember this lady was Lisa — she commented on our shared name. Her partner is an architect and he said some really poetic things about my sketches of buildings; it was so affirming to hear that he thought I’d captured “the essence of the space.” 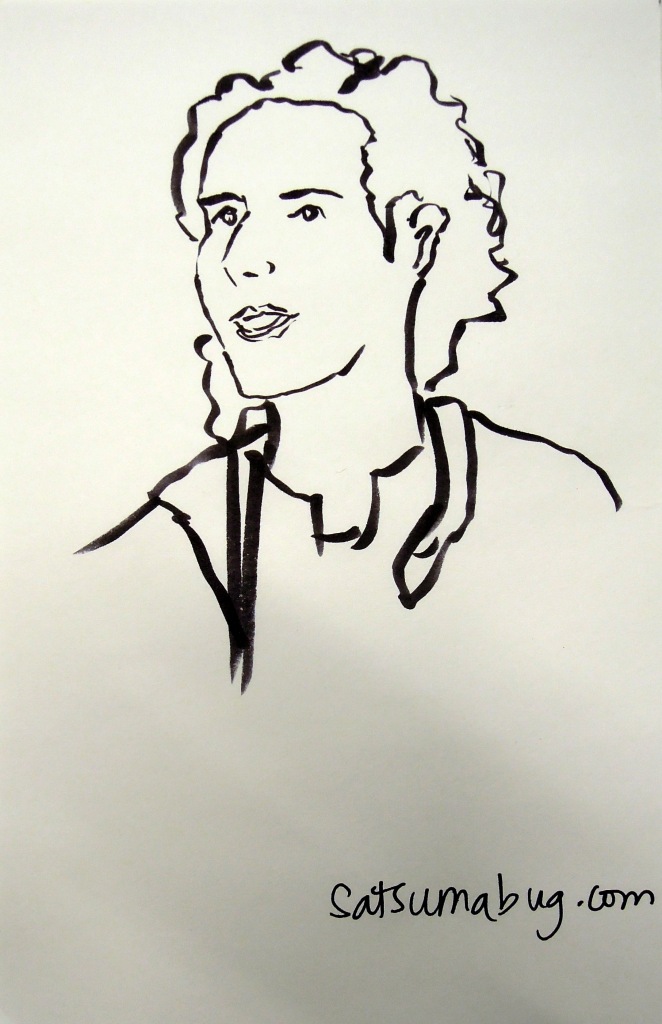 Here’s another person whose name I got: Chris. He recently moved in upstairs and he is, among other things, a drummer in a rock band called RIBS. Give them a listen; they’re awesome. (I kind of thought they might be because Chris had a great energy and presence.) He posed for his photo in roughly the same stance as for the sketch.

This lady is also an upstairs neighbor, Anh. When she stopped by she said, “I came by yesterday but you weren’t here!” What a fab greeting. She had a very delightful energy and remarked after the sketch, “No one will believe I stood still for a whole minute.” Turns out I had spoken to her husband the day before; he designs clothes and was probably the nicest person I talked to on Saturday. Wish I’d gotten a sketch of him too. Anh is much more trim than she looks in the sketch, but I think I captured her expression as she looked at my drawings. 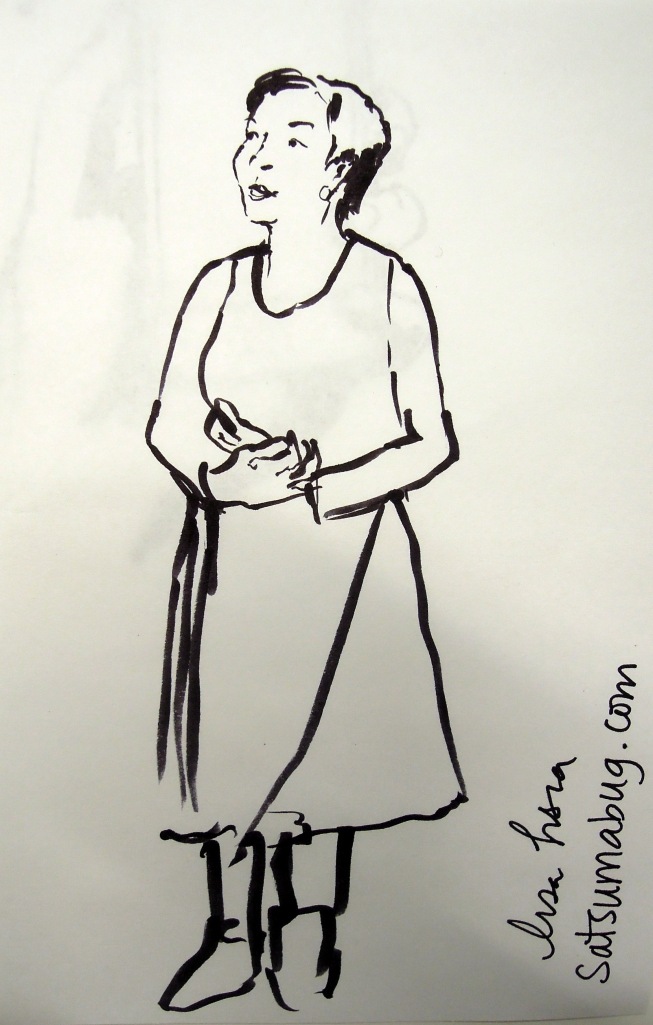 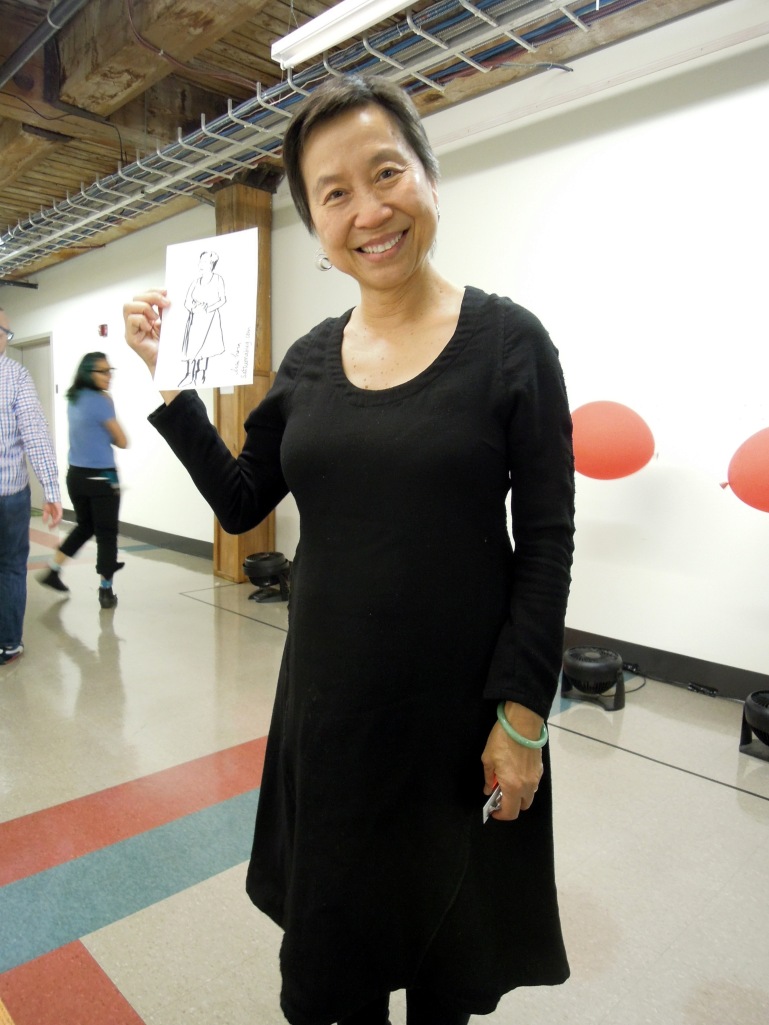 These two were a mother and daughter (I assume); when Mom saw my display she gestured to her daughter and said, “This reminds me of your work!” and her daughter protested, “I don’t have ‘work’ — I don’t… art. I do drama.” I hope she won’t find it super embarrassing that I share this story, but I do so because it’s how I felt for many years and still feel sometimes at events like this one, where I can’t stop comparing myself to all the fantastic working artists in the other studios and thinking oh god I can’t match up (ahem: total proof). Drama, writing, art, whatever you do — I once read this amazing quote by Richard Bausch: “When you feel global doubt about your talent, that is your talent. People who have no talent don’t have any doubt.” (from Off the Page: Writers Talk about Beginnings, Endings, and Everything in Between) 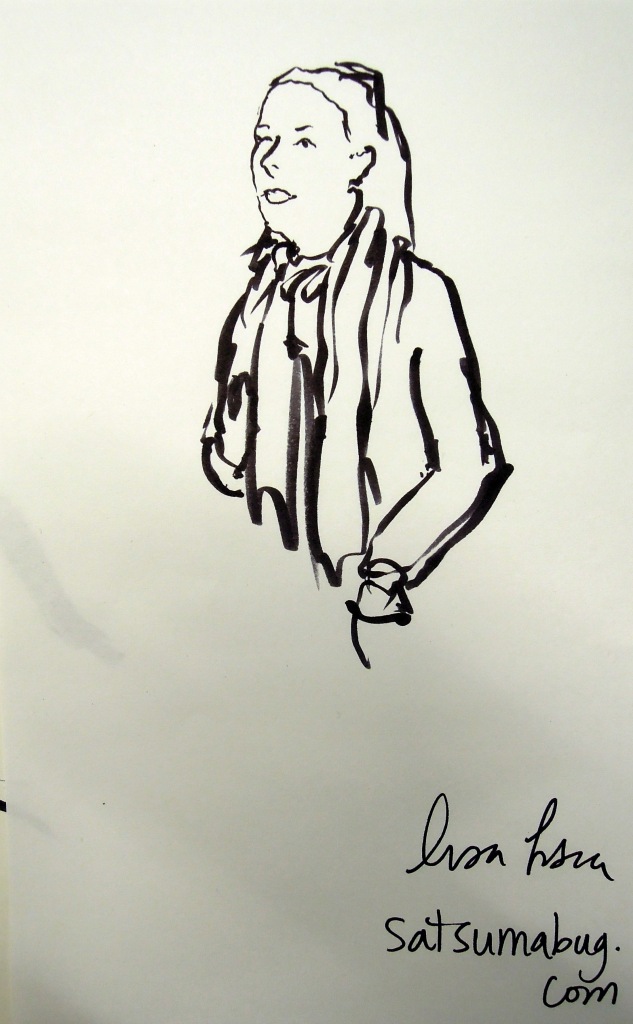 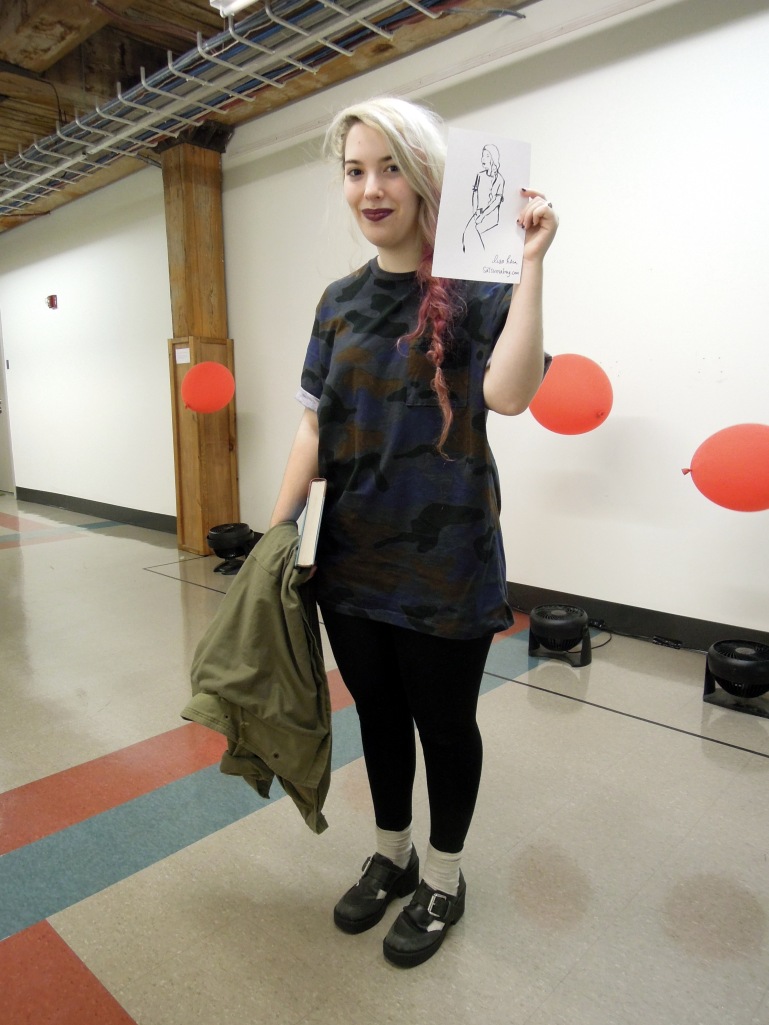 The last lady I sketched was also super nice and had really lovely hair which I again failed to capture. It’s funny, I’m good with hair when I’m using pencil, but that doesn’t always translate with pen or paint. I still feel, though — as I am quite surprised to feel, with all these sketches — that my rapid sketch gets the essence of how she appeared to me. Maybe superfast sketches capture essence even better than longer ones; I’ll have to try that experiment sometime.

For much of that day, I was kind of berating myself for not sketching more people; I thought I was being too shy by not offering to sketch every single person who walked by. In retrospect, though, I think my instincts were right. When I first came up with the idea I wondered if I was giving away too much of my work by handing out sketches for free, and I think I would have been, if I’d been doing it as a promo tool — basically bribing people to stop, look, and take home my URL. But by only extending the offer to people who already showed interest, people I thought I would enjoy interacting with for longer than a moment, it felt like an exchange — which, as regular readers know, is a central aspect of my creative process. To my sketch subjects, if you’re reading this, I truly enjoyed meeting every one of you, and I thank you for sharing your time with me (and permitting me to post your likeness on my blog). You made my first Open Studios a great experience — you were shining highlights amid the downtime.

And there was a lot of downtime… 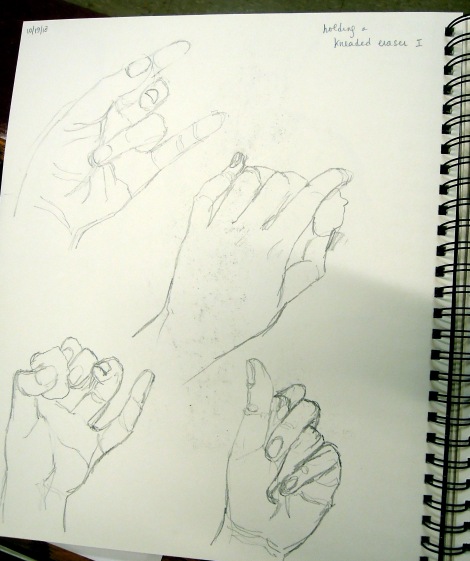 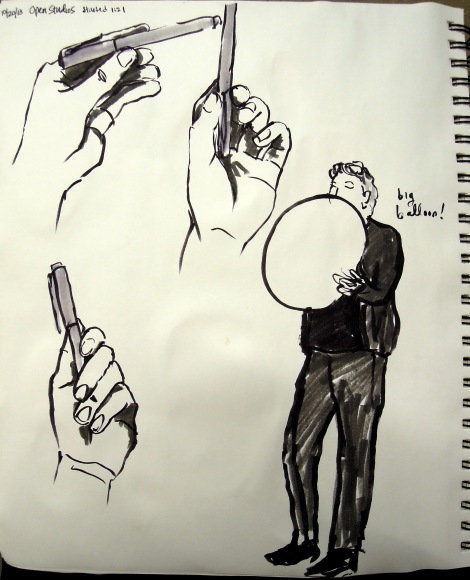 … but, you know, twenty-six attempts later, I’ve gotten a lot better at drawing my left hand. And hands in general!
—–

*Most of the other artists were showing their original work, not prints or copies, but because my sketches are my diary as well as my work, I couldn’t bear to leave them in the hall unattended. Also I didn’t want to remove the pages from their bindings.

**By the way, I’m not judging the people who didn’t stop. I’ve gone to too many shows myself not to know how dazed and overwhelmed one gets, trying to take in so much all at once. I’ve been the person who walks by without looking, or the person who just says hi politely and moves on. As an artist/exhibitor, of course I wish everyone would pause and engage, but it’s just not possible, and it’s my job to recognize that it’s not personal and it doesn’t reflect badly on my work.