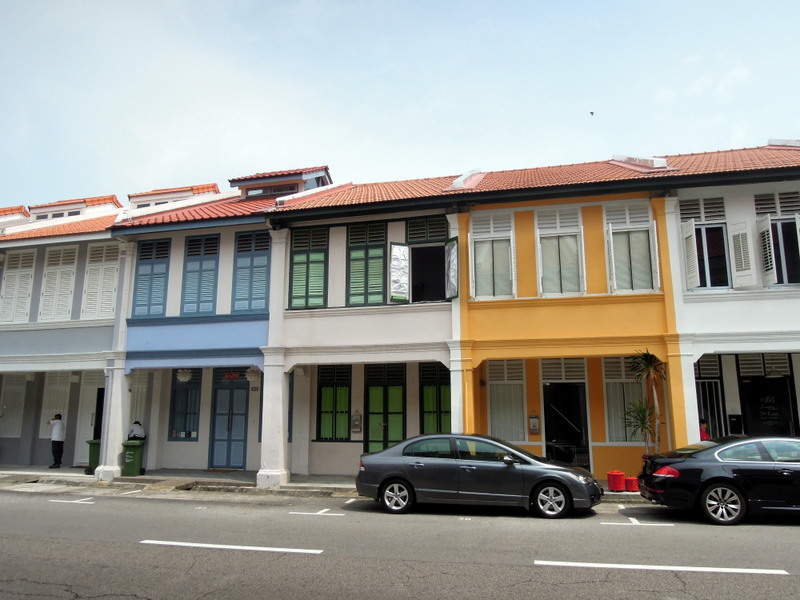 I’m typing this from the airport before our flight to Auckland. Before we came to Singapore my aunt, who lived here for several years, told me she thought a 10-day stay might be too long. It’s true the city is not large, and the heat and humidity are daunting. But I’ve found it a very interesting place to visit. Singapore reminds me a bit of Hawaii, in that the population is very diverse (but mostly Asian), and most people came here from somewhere else — a migration that may have happened a few days ago, or a few generations. Erik and I both felt that the country’s blend of old-school and super-modern, Asian and Western, resonated with our own backgrounds.

If I had more time, I’d write long thoughtful posts about all the places we visited. But since I haven’t, here is our Singapore trip in photos, with some commentary. Best not to read when hungry!

On our second day here, we visited a hotel buffet with Singaporean dishes. Normally I avoid hotel restaurants, but this proved a good introduction to many local foods. They had chefs making roti prata and laksa to order. 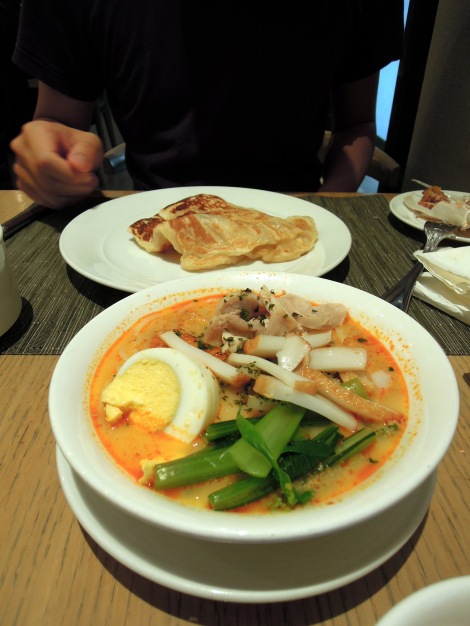 I even tried a bit of durian cake. Durian is infamous for its overpowering aroma and love-it-or-hate-it taste; LA food critic Jonathan Gold, no shy eater, wrote that he wanted to claw it from his mouth. Even  diluted by cake, it was an aggressive flavor. It reminded me of raw peanuts with a hint of caramelized onion — it wouldn’t have been too bad, except that I still found the scent absolutely repulsive. I wanted to eat it and claw it from my mouth.

After that we visited the National Museum, which was very well put together and lots of fun.

Many exhibits had audio, so we could hear interview or music clips, or dramatizations by voice actors. 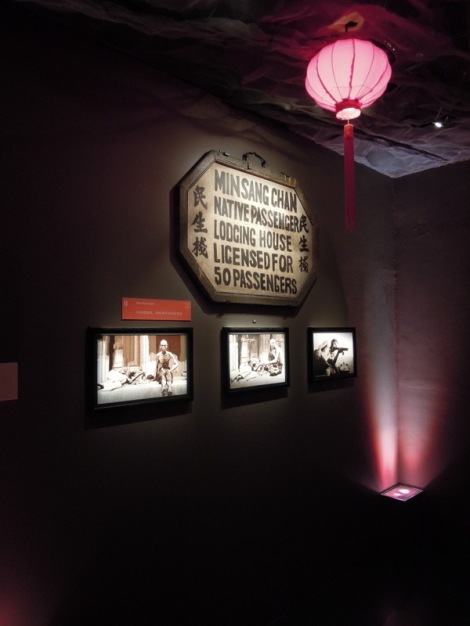 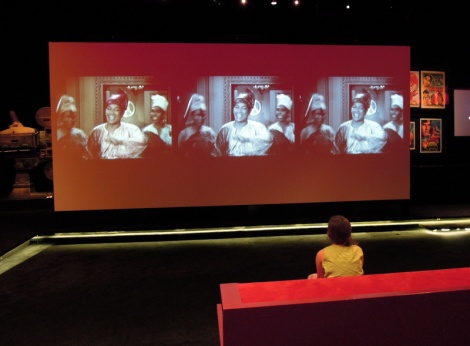 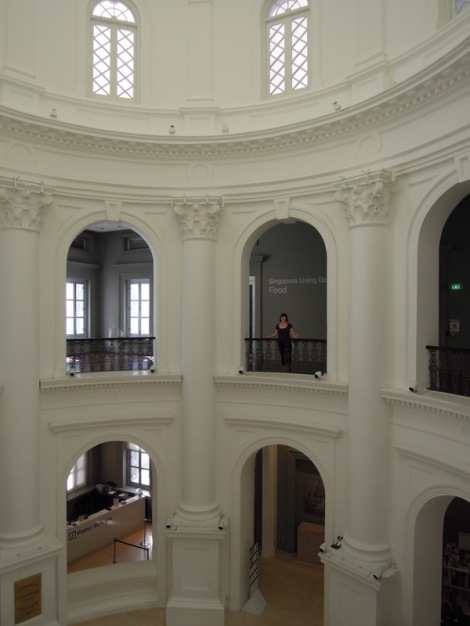 To add to the sensory experience, there were even food aromas piped into the culinary gallery! 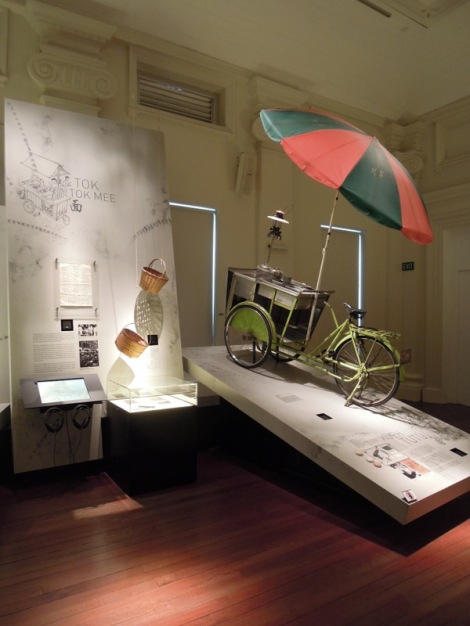 A couple days after the National Museum, we went to Geylang (I mentioned the hawker centre in an earlier post) and walked around until I wanted to collapse from the heat. It’s a pity I can’t spend more time outdoors here, because actually Singapore is beautiful: leafy and lush, with colorful temples and shophouses, striking commercial and public architecture, and walkways and highway overpasses swathed in bright pink bougainvillea. 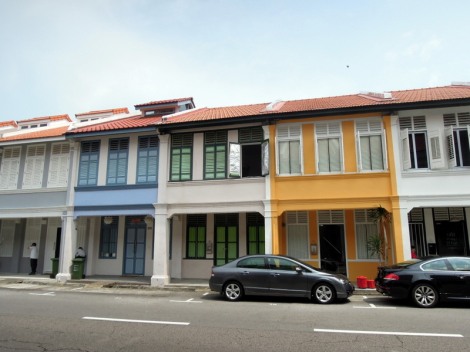 There is also, of course, food around just about every corner.

On another day I visited the Peranakan Museum (“per-AH-nah-kahn”), dedicated to the descendants of Chinese who immigrated to the area several centuries ago. It was a charming museum, even if I found the exhibits a bit scattered. 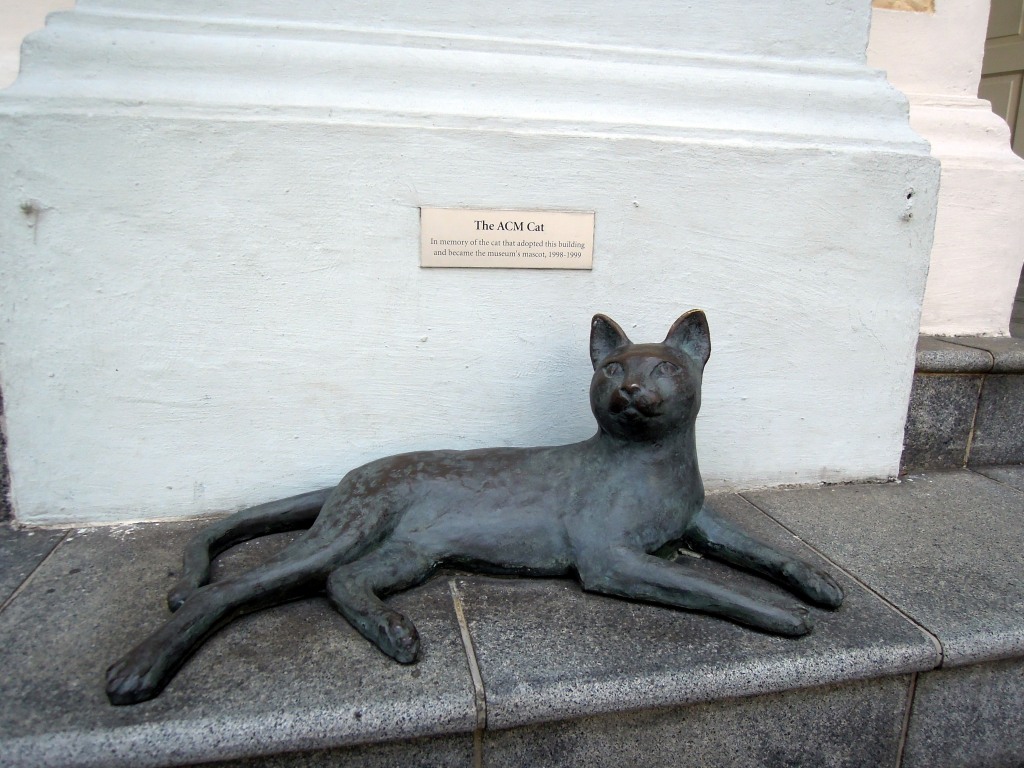 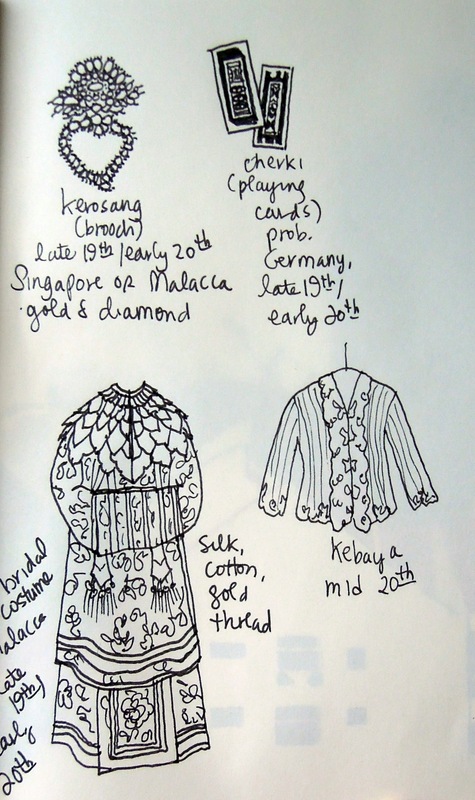 Area around the museum:

I followed up my museum visit with a shopping trip to Haji Lane. It’s a tiny lane and I had some trouble finding it, but I enjoyed walking around the neighborhood (sweating all the while, naturally). 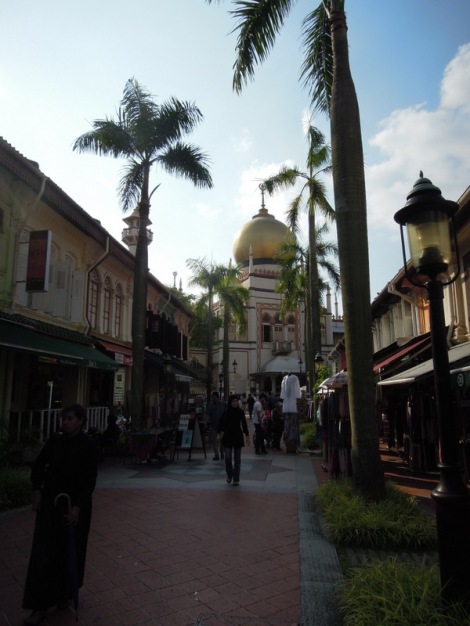 Around dinnertime I took a bus to the Maxwell hawker centre, where Erik met me. Up till then I’d been getting meals where the queues were shortest, but this time I decided to join the longest line. After I’d been there a couple minutes, one of the vendors came out and asked me what I wanted (in Mandarin). I told her “chicken rice” in English, and she said in Mandarin, “We might be sold out. Not sure. I’ll check.” When she finally came back, she told all of us at the end of the queue — in Mandarin — that they were sold out. The white guy behind me clearly didn’t understand most of her speech, but he got the gist: “All right, meiyou, okay.” (Meiyou = no more.) I walked around the centre a bit, then returned to that aisle to find a new queue forming at a second chicken rice stall, and there I got my chicken rice. I wondered if the queue would travel around the centre, always going to the next best stall, until they were all sold out! (My photo from this evening didn’t come out well, but there will be a chicken rice photo later in the post.)

We liked the Maxwell centre so much (thanks Angelina for the recommendation!), we returned another day for another meal.

Wonton noodles here are called wanton mee. Every time I see the sign I just imagine the dumplings as flagrant hoydens: wantons.

One of my new favorite drinks here: aloe vera juice with lemon. It’s got bits of jelly in it! 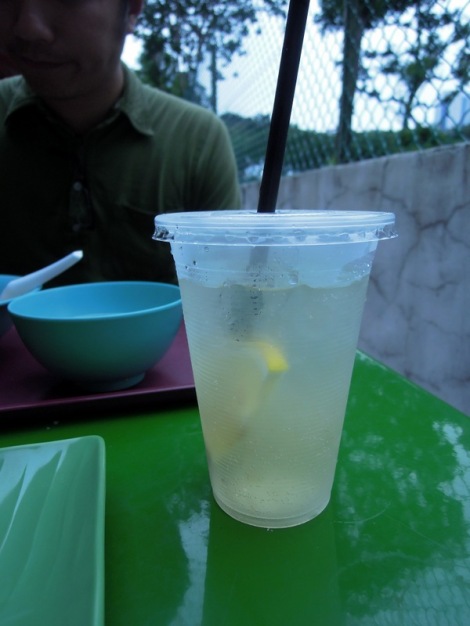 I passed the Singapore River while on the bus that afternoon, though I didn’t take this photo until days later (and from a different angle): 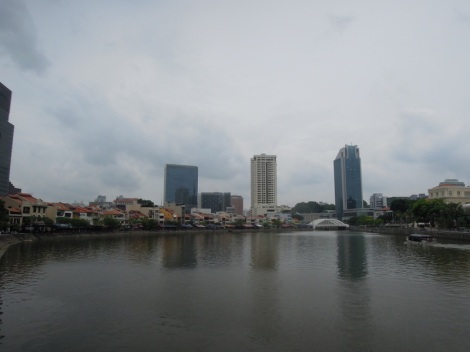 That was a Friday evening and we ended it at MAAD, the Red Dot Design Museum‘s monthly marketplace. There were DJs and dozens of vendors selling handmade items or edibles. I tried on a printed tank (too small, no surprise) and bought a delicious rose pomegranate drink from a friendly young guy. In a country of so many malls, it makes me very happy to know there is still an indie handmade scene. 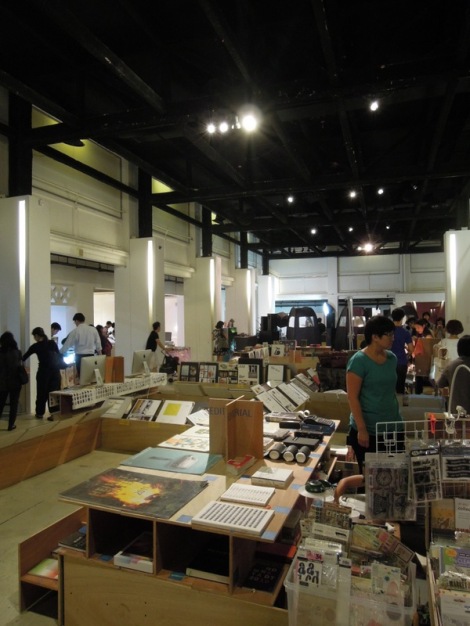 The museum itself seemed quite appropriate for Singapore, since all the design on display seemed to be consumer goods. 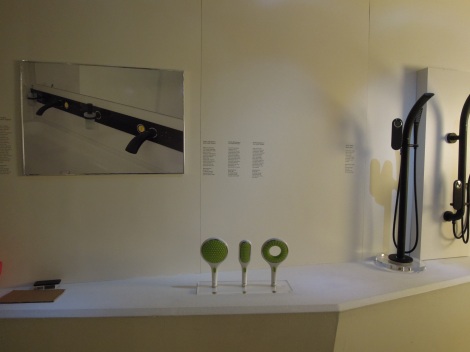 The next morning we had a relaxed breakfast with our hosts on their balcony. Later I made a sketch of the view from the same balcony. There is construction all over Singapore — the price, I suppose, of keeping an island nation as modern and efficient as possible. It was Saturday so I hadn’t realized the work was still going on, but when I looked up from drawing some of the cranes, they’d moved!

That evening Erik and I went to the malls again, to walk around and eat dinner in the comfort of the air con. There are so many shopping malls around Singapore, I can’t believe people buy enough to support them, but apparently they do.

The same chain stores are even repeated several times on the same block; I visited a Muji two malls down from another Muji, and a Sephora in a mall next to another mall with another Sephora. You’d think it would feel like Groundhog Day, but actually each mall has so much of its own character, you learn to tell them apart. By now we even have our favorites.

Food in the malls, though usually more expensive than comparable dishes in the hawker centres, can be quite good. There is usually a lower-priced food court on the basement level, with a nicer food court on an upper level, and cafés and pricier restaurants scattered around the various floors. 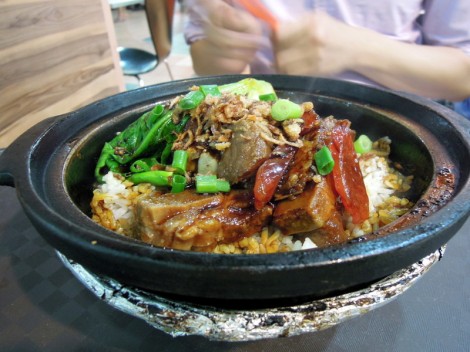 Chee cheong fun from the upper-storey food court at Junction 8. 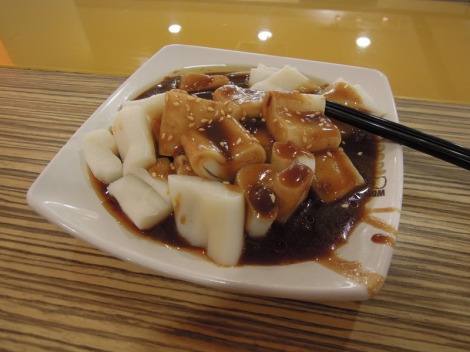 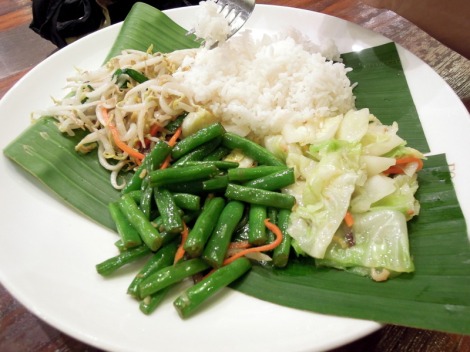 More chicken rice! You have to pay extra to get a drumstick.

Dinner at one of the restaurants, Paradise Dynasty, at Ion Orchard. Not to be confused with Taste Paradise on the same floor!

Chijmes isn’t one of the big shopping malls, but it is a centre with shops, restaurants, and bars. Amazingly, it used to be a convent.

We had lunch at Lei Garden. The dim sum was quite nice and the service reminded me of places we went to in Hong Kong.

Fried taro dumplings filled with chicken and mushroom. Usually they are not this shape.

Baked seafood rice with white sauce was a bit salty, but tasty.

And here’s some non-mall dining to counteract the above (that’s how I always felt, when we left the malls: that we were attempting to cancel out the chain stores, the environmental impact of air con, and impact on our wallets!).

Chinatown (near the Maxwell centre). 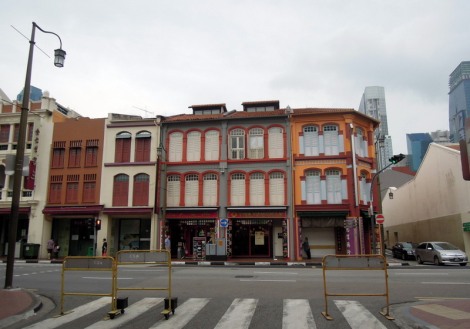 This bakery had a long queue, so we joined it.

Diamond-shaped dan ta! I’ve never seen such a thing. I ordered in mixed English and Mandarin: “one dan ta, one coconut dan ta.” This apparently made perfect sense to the girl behind the counter, because she bagged them up and then gave me the total in Mandarin. This is something I enjoy very much about Singapore, the mix of languages. 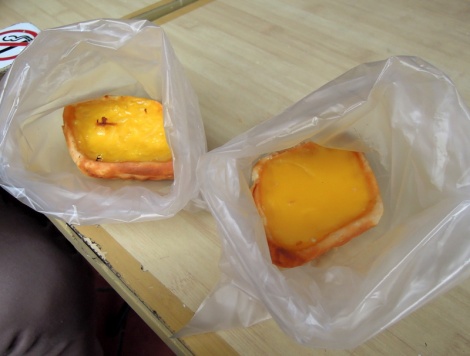 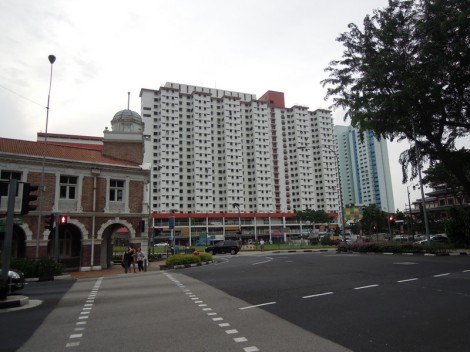 Early breakfast at the hawker centre at Jalan Besar. We got there around 7 AM and most of the stalls weren’t yet open. 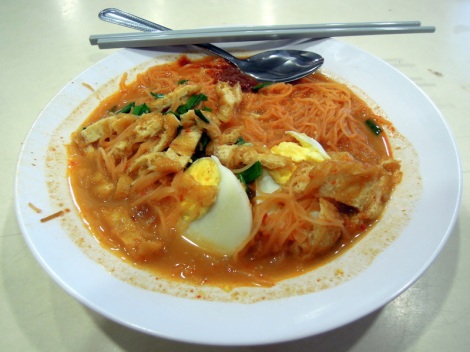 Kaya toast set, a Singapore standard. It’s toast sammiches with a generous pat of butter and kaya (coconut curd), two soft-boiled eggs, soy sauce and white pepper, and coffee or tea. According to local custom the tea is sweetened with condensed milk. I don’t like Thai tea, which also has condensed milk, but I have really enjoyed the Singapore teh. 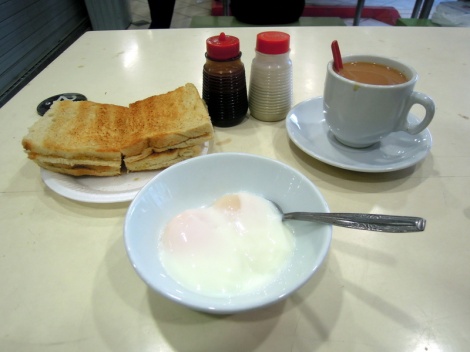 Yesterday, on our last full day here, we visited the Singapore Art Museum (SAM). There were many exciting, provocative, and delightful pieces from artists all over Asia. Here are a few from Singaporean artists, some of them under 35.

From Ryf Zaini’s Unveil the curtain in the window with no ledge, 2013. 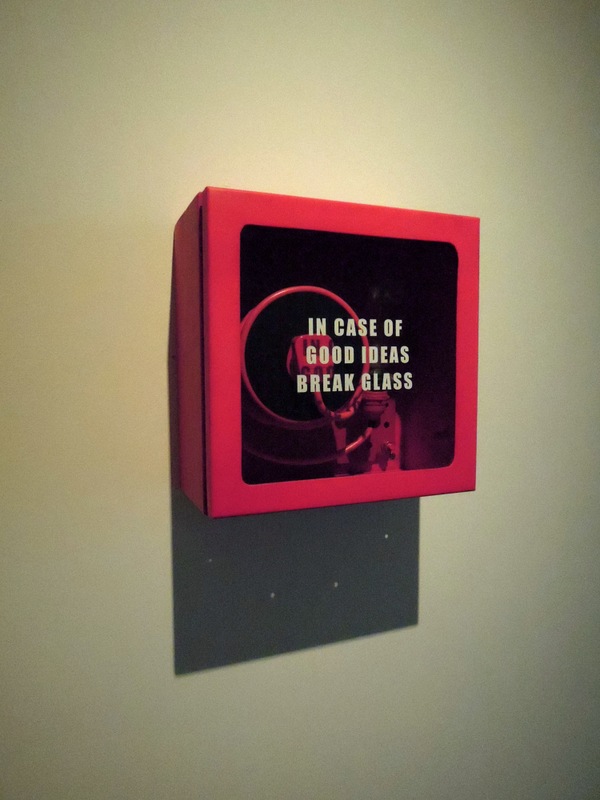 Grace Tan’s refuge, 2013. The clouds are made from polypropylene loop pins.

I’m not sure whether this one is an art piece or part of the museum: 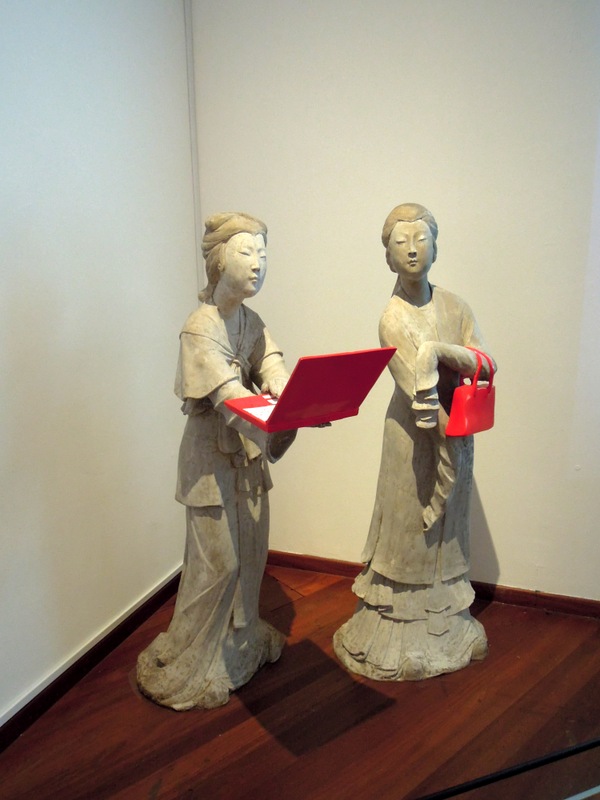 Just about every day we’ve been here, it has rained. It starts with a rumble of thunder and a few drops, and then before you know it the sky is roaring and the drops fall thick, fast, and heavy. Within about an hour, everything is clear again. We watched yesterday’s rainstorm from inside the museum. 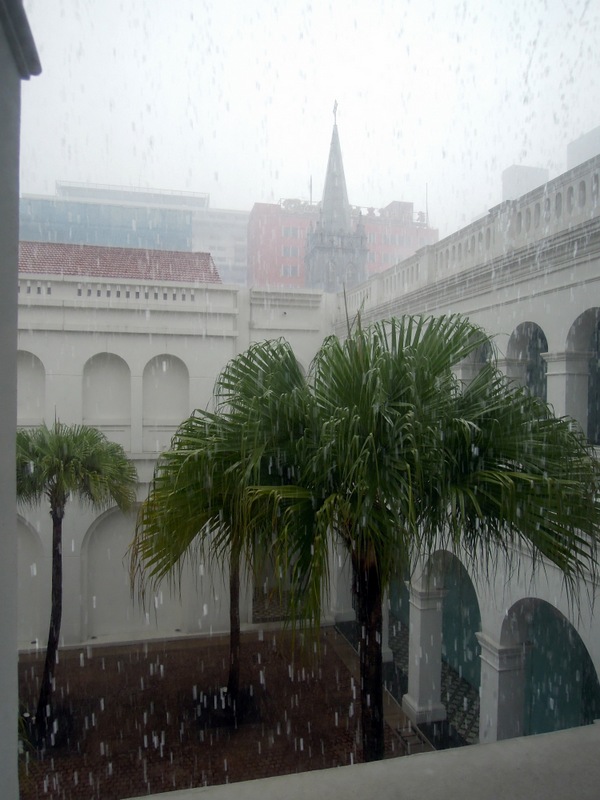 And here’s a view from our street, after rain:

Today we had our last Singapore outing when we went out for lunch. We took a different route than usual and found it full of intriguing-looking homes. 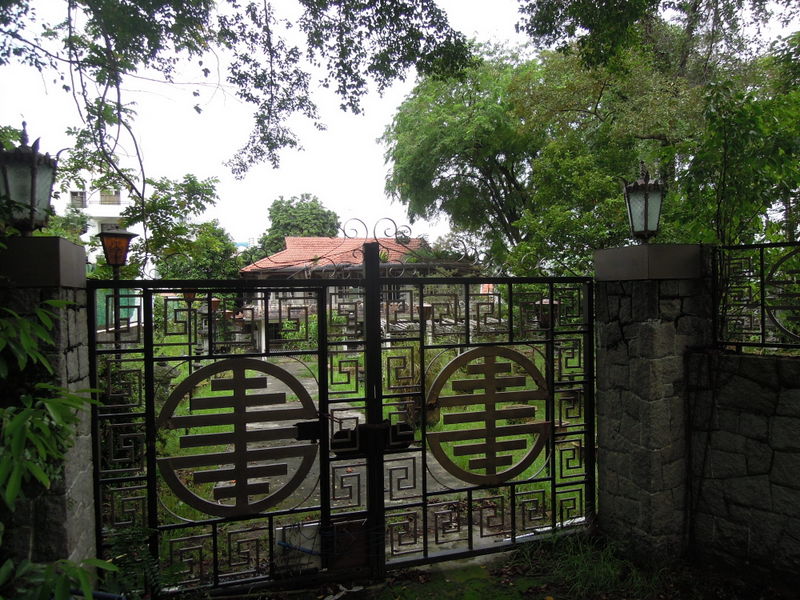 At the mall we had lunch, and I bought snacks.

Kueh lapis in regular and pandan flavors. I was very excited to find this cake here, as I’ve been baking it for years after finding a recipe in Saveur magazine. It’s a many-layered buttery spice cake and it is simply delicious, though even the four-layered beginners’ version I make is time-consuming and a bit tricky. 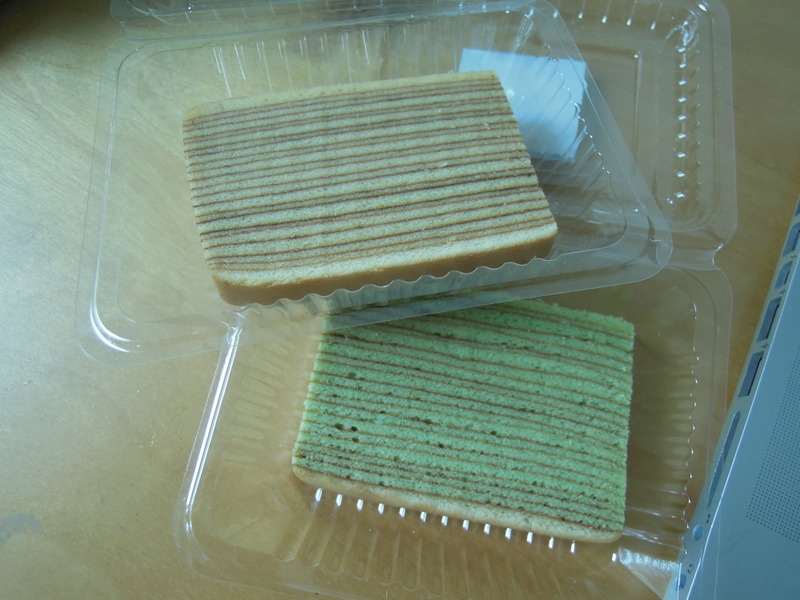 And now it’s time to board the plane — see you in New Zealand!!