Kiyomizu-dera is one of Kyoto’s most famous temples. Founded in the 8th century, with the current buildings dating to the 17th century (and constructed without the use of nails), it perches on a hillside in the eastern part of the city. Here’s a dramatic photo from Wikipedia:

We timed our Kiyomizu-dera outing to coincide with Hanatōro, “flower and light road,” an evening festival which adorns the Higashi-yama district with about 2500 lanterns and many ikebana arrangements.

We set out well before sundown. The 206 bus dropped us off at the foot of Kiyomizu-michi, a narrow street that slopes gently up for 600 meters until reaching the main gate of the temple. As we neared the temple, there were more and more shops and restaurants, selling everything from cheap tchotchkes to fine porcelain to fishcake on a stick. The food shops handed out samples; we tasted chocolate and banana yatsuhashi, generous cupfuls of green tea, and delicate matcha-flavored langues de chat. Meanwhile, everywhere we looked there were slow-moving groups of local schoolkids and Taiwanese tourists in rented kimono.

{click any photo to enlarge, but no mouseover descriptions today} 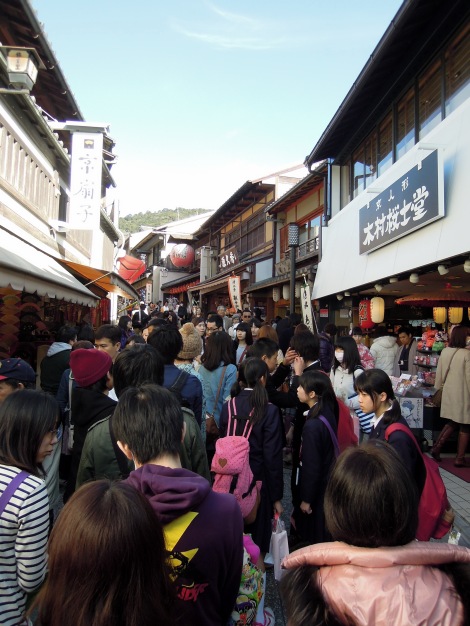 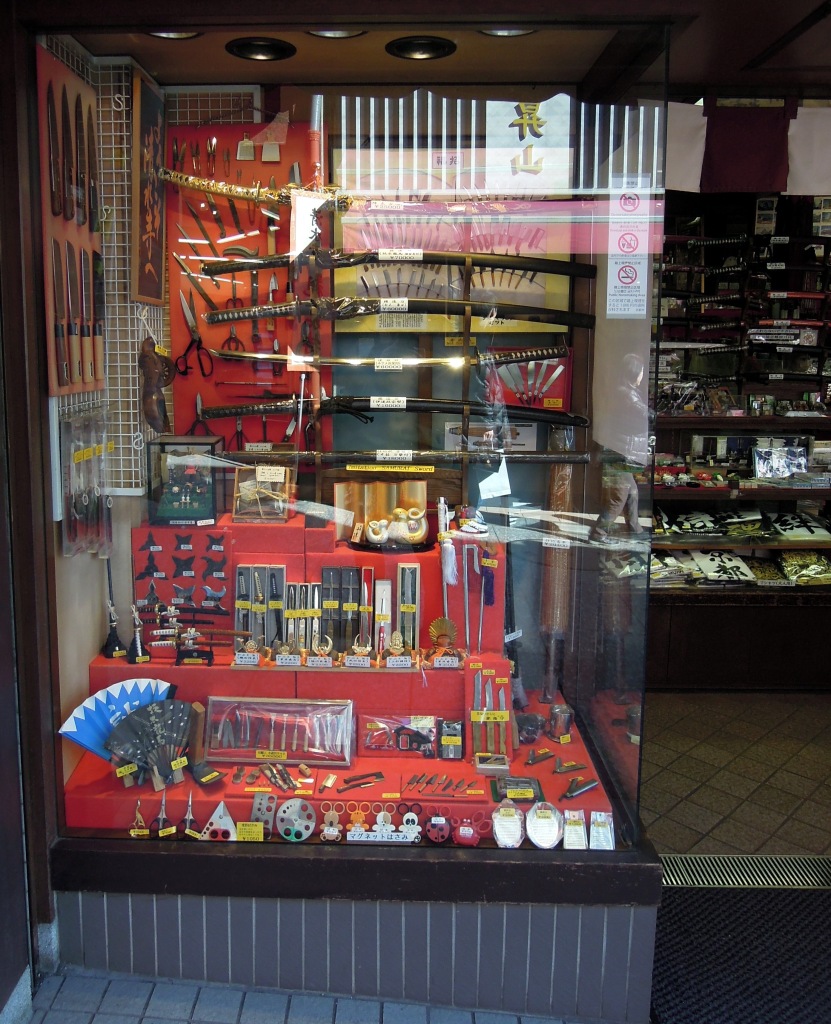 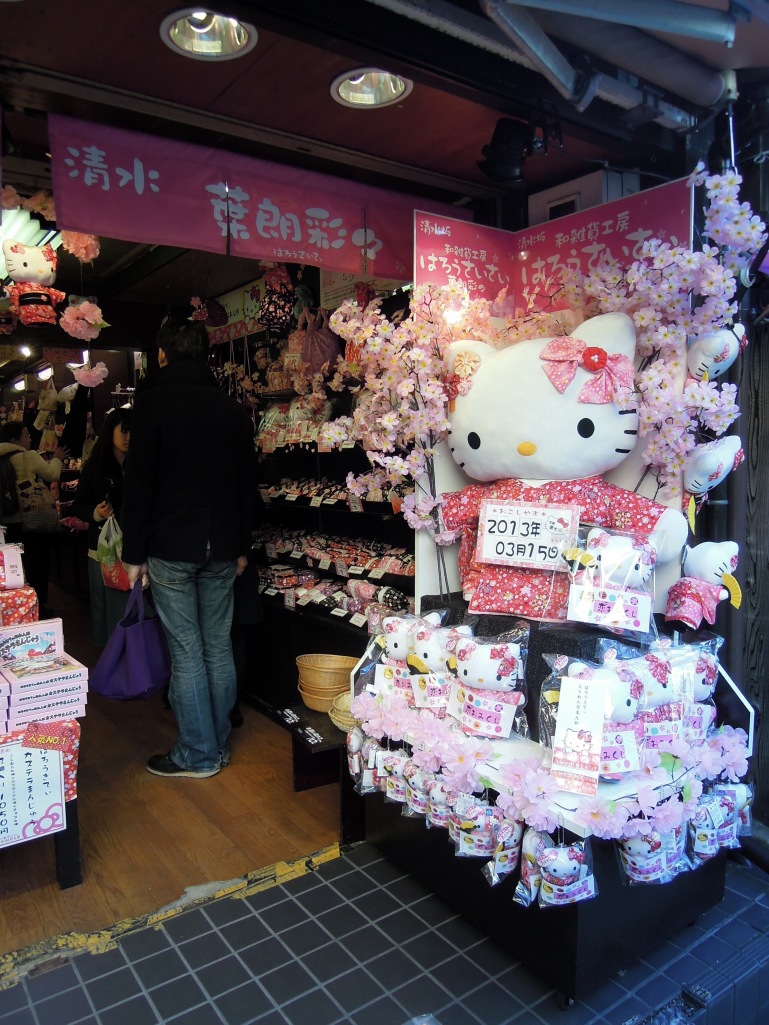 Cute decoration on one of the little side streets:

Looking back down the street from the steps of the temple:

Once we arrived at the temple itself, the crowds thinned a bit as people dispersed over the grounds. The vivid orange main gate was quite a sight with an early-blooming tree (ume?) right in front. 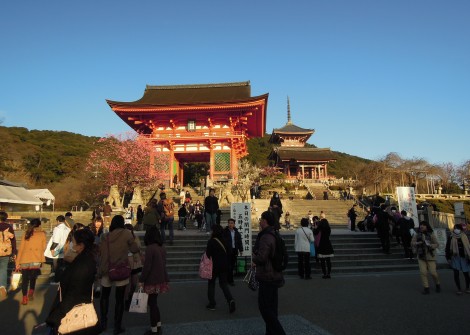 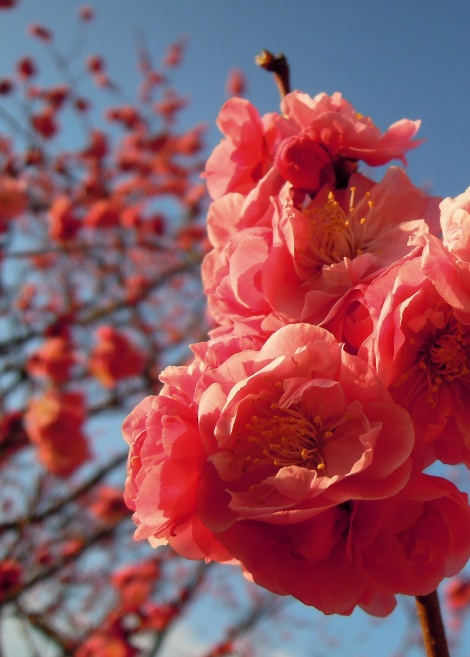 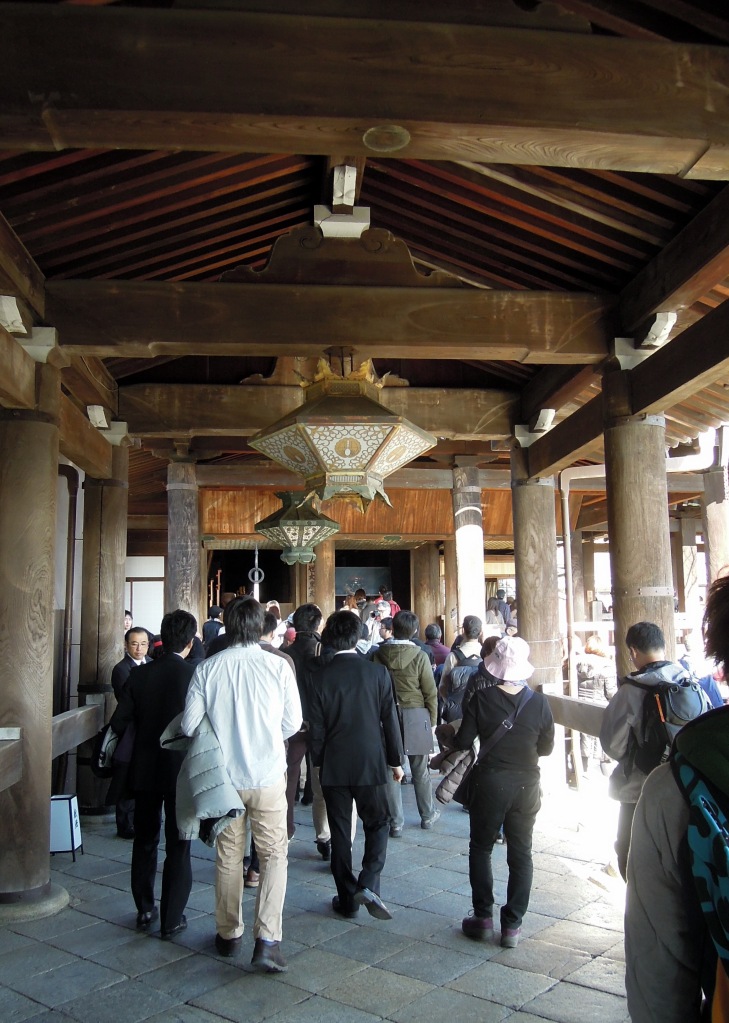 We paid ¥300 apiece (about $3 US) to enter what I guess is the main building. There was incense burning, treasures on display, and myriad items for sale, mostly good-luck charms and pretty little wooden tablets for writing down prayers. You could also shake a wooden cylinder full of fortunetelling sticks, but the fortunes were all written in Japanese. 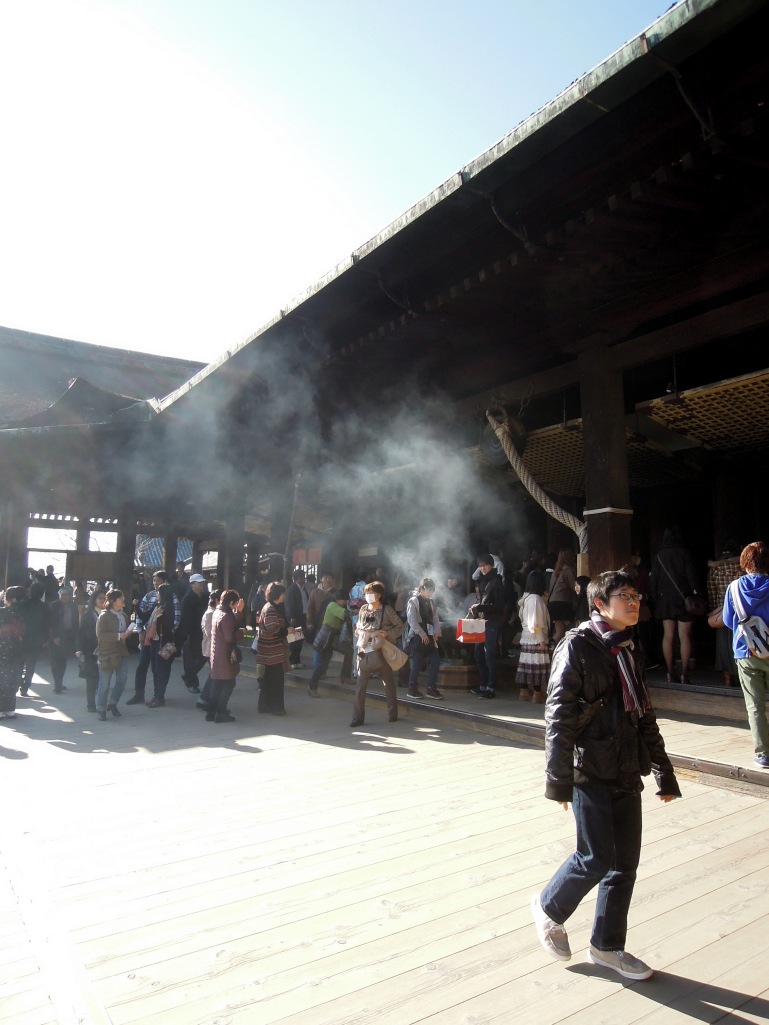 We weren’t as interested in all the above, but there was also a view:

Down below (juuuust visible in the pic) there are three little waterfalls from which people line up to drink. The temple is named for these; kiyomizu means “clear water” (清水). A funny thing about the water: it’s said to have special powers, but what are these exactly? One guidebook says simply that the water is “curative,” but most other accounts ascribe a separate power to each of the three falls. One website says long life, wisdom, and love; a guidebook says long life, wisdom, and beauty. At dinner the other night with some new Japanese friends, one said, “The waterfalls give you a long life, money, and… uh… hmm.” The other four couldn’t remember either. After a moment he said, “Ah, no: long life, wisdom, and… and… hm.” In the end he offered, “Well, what would you say are the three most important things in life?” Perhaps that’s the best way to approach the waterfalls, after all!

After exiting the main building we took a path leading around the hill for more views. 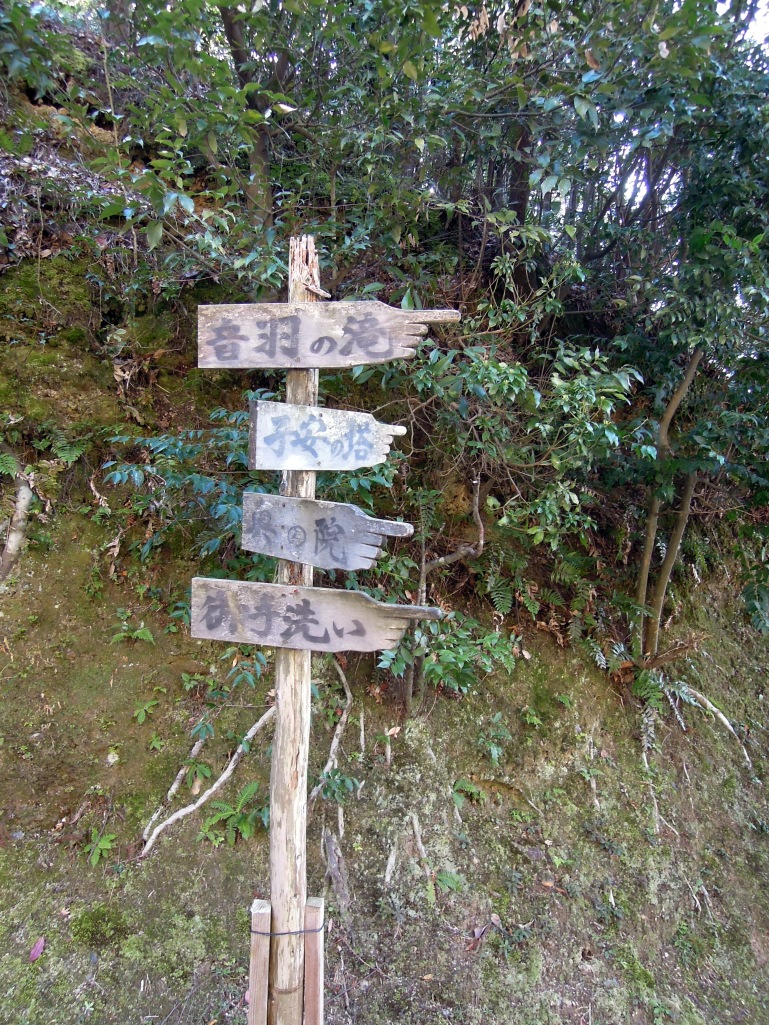 The path branched off at one point and I stood there and made a sketch. When I was almost done an older man said in passing, “Very good.” (Did he have a British accent?) I couldn’t tell whether he was surprised to hear my reply (“Thanks!”) in English.

Along here I heard a middle-aged man and a younger woman speaking Shanghainese. They were discussing kimono sleeves (inspired probably by the young woman in front of us).

After that we left the complex and wandered around the shopping street for awhile. I bought some stationery and a drink, then Erik suggested we return to the temple to watch the sunset. We were not the only ones with this idea, but the place was much less crowded than before.

As it turned out, we didn’t quite catch the sunset. At six the temple closed for half an hour, and guys in white vests came around asking everyone to leave.

We thought of sticking around to see the temple illuminated for Hanatōro, starting at six-thirty, but ultimately we decided to move on. Other places were starting their illuminations at six, so we took a map and headed north. 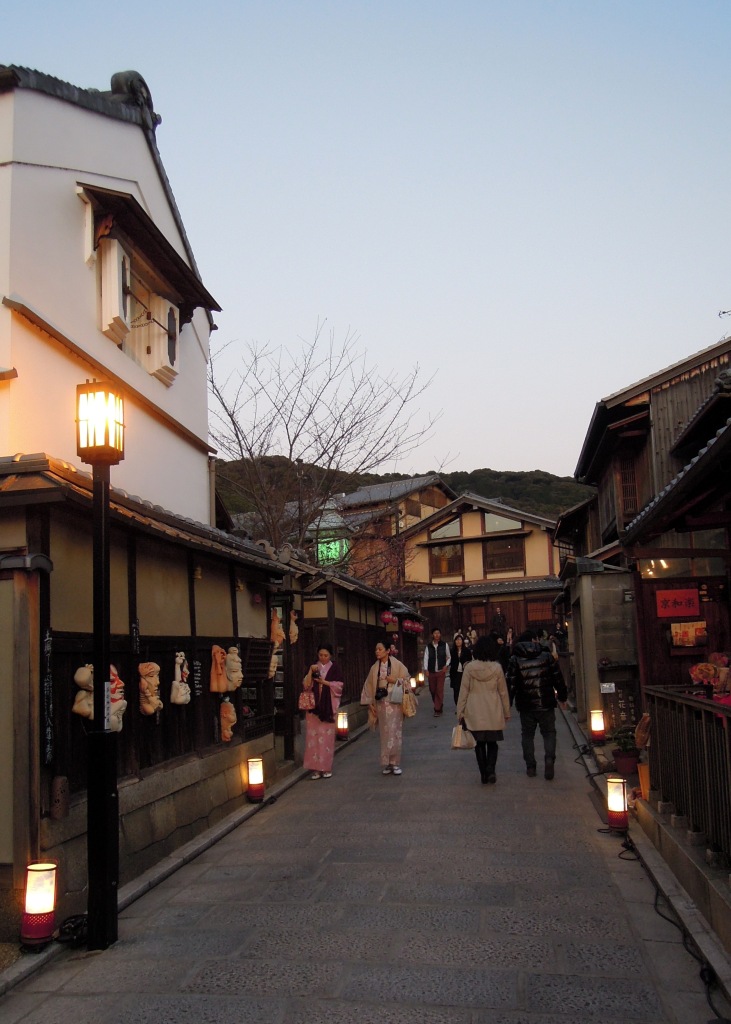 As the sky darkened we saw many photographers (always men, I think) setting up tripods to catch the lanternlit views.

Generally speaking, Kyoto’s streets aren’t lit as aggressively as in some other cities, so the festival illumination really made for a lovely contrast — and because so many of the lanes are rather dark, one appreciates the lanterns more. 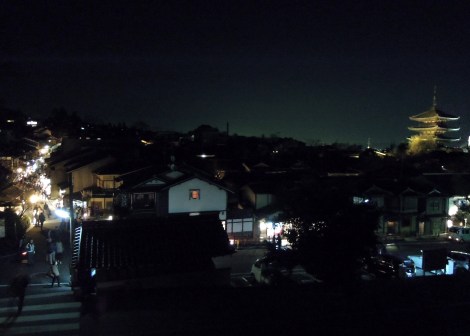 We stopped for a tasty dinner at an udon restaurant called Omen. At the risk of overloading an already photo-heavy post, I’m throwing in a number of photos of our meal just because everything was so pretty! 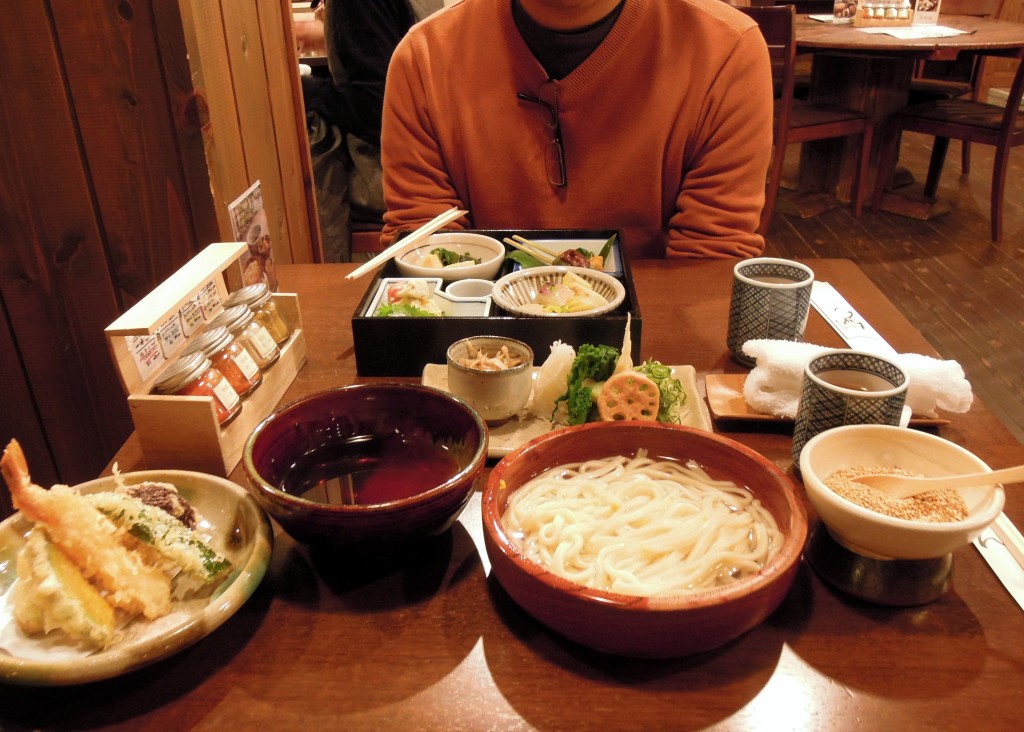 The vegetables for my udon set. Left to right: seasoned burdock (gobō), daikon (if I remember right), Chinese broccoli, spinach, ginger, baked (or fried?) lotus root, negi. I thought I disliked gobō but it was really good!

Tempura with a bit of salt for dipping. I must say this was far from the best tempura I’ve had.

Little sprinklings of yuzu zest over the udon. The noodles are sitting in water, I think to keep them separated. 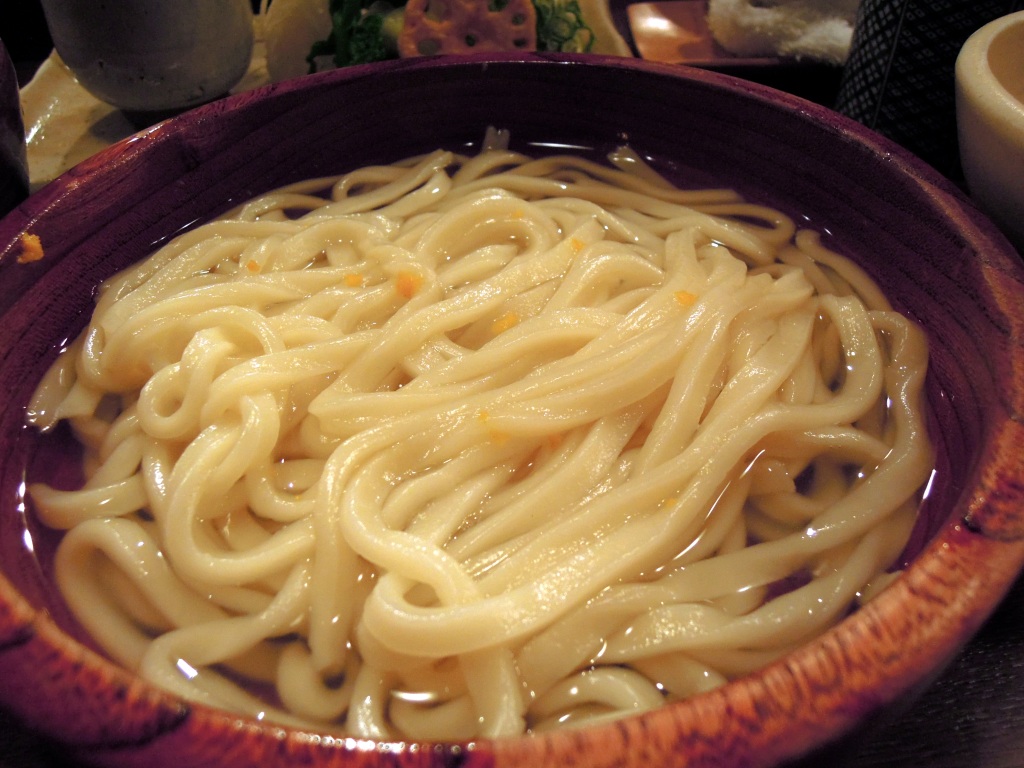 While we were eating dinner we heard the sound of children’s voices and wooden blocks being clapped together. I turned around to look out the window — as did everyone seated along that wall — and saw a line of young kids in matching outfits, parading along and singing and clapping the blocks. It was very sweet and it seemed the local diners thought so too. Apparently the song was about fire prevention.

After our meal we kept going north and ended up at Kōdai-ji, a well-known Zen temple. It was founded in the early 1600s by a woman — Hideyoshi’s widow.

I think we missed a lot by not seeing the temple during daylight hours — the water features and maki-e lacquer were not so visible in the dark — but on the other hand, the nighttime atmosphere was very special. Inside the buildings we had to take off our shoes, which I liked very much for the quiet and the intimate feeling of walking around the tatami with all these strangers.

Quick sketch inside one of the buildings, where photography wasn’t permitted:

The rock garden had a sort of light show with different colored lights and fiberglass light “streams” flowing over some of the larger rocks.

And when we could see the water, the reflections were gorgeous. (No, the trees aren’t that color! That’s from the lights.) 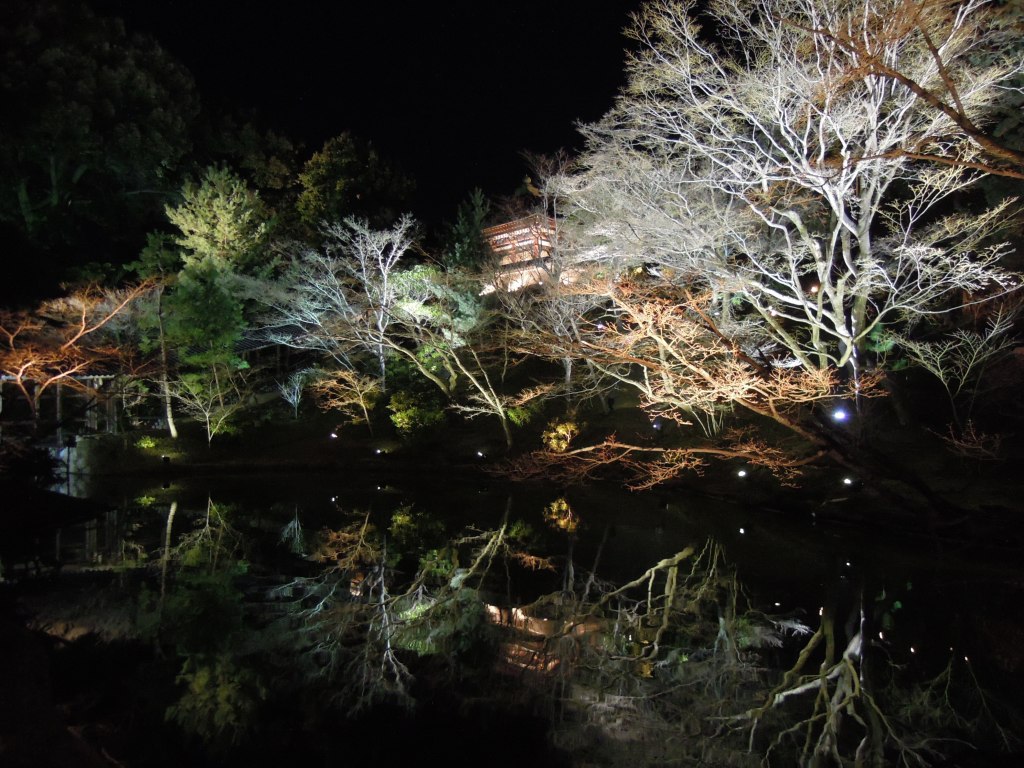 On the hill behind the buildings there was a bamboo grove with very tall trees. The air was perfectly still, so the bamboos were too, otherwise I think it might have been a bit creepy to walk among them. Bamboos make a very musical plok sound when the breeze blows them against each other — something I learned in Hawaii. 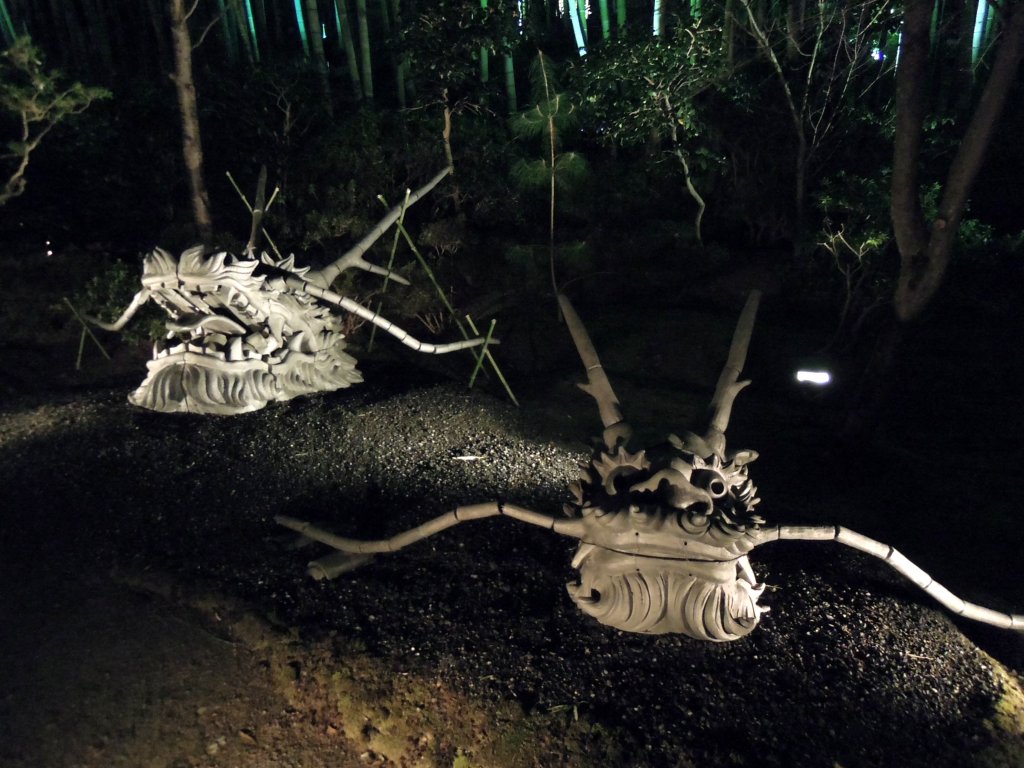 Upon leaving the temple, we checked our phones and found that it was almost closing time for the festival. So we hurried to Maruyama Park. 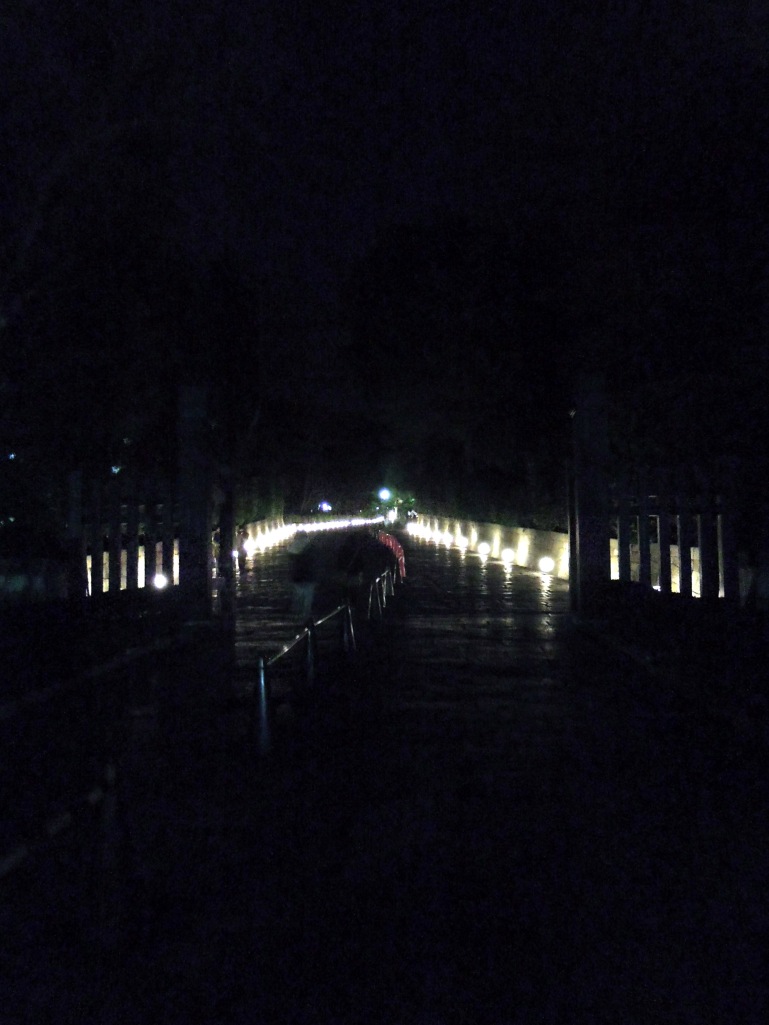 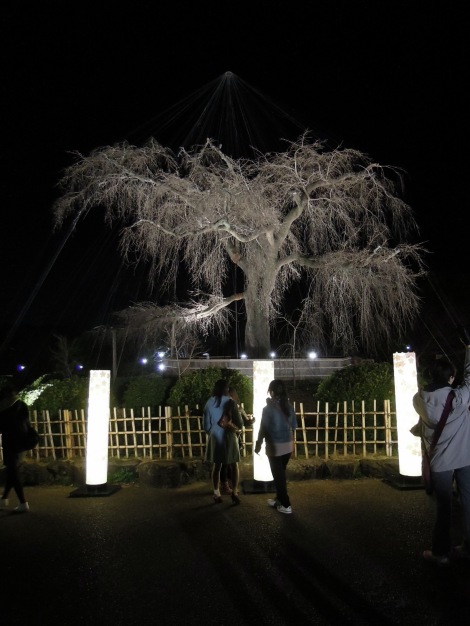 The park has some of the most exuberant displays of the festival, including many big light sculptures. There were whole groves of them, though alas, their colors didn’t photograph well.

This one was mostly white with some bands of color:

But these big ones were very brightly colored, and you can’t tell that at all in the pics:

Besides the large sculptures, there were also scatterings of smaller lanterns.

These bamboo lights were in a tiny river and we crossed over on stepping stones.

Vendors were selling hot wine (“hottu wain”), and there were a couple of cafés with dessert sets. I wanted to stop and get a parfait, but we decided just to head toward home. We passed another famous temple, Chion-in, with its massive gate that is one of the national treasures.

As we made our way home I was grateful we hadn’t stopped for dessert. The long day was making itself felt, and the 1.5 km walk and 15-minute subway ride began to feel interminable. I actually closed my eyes a few times while trudging along Karamaguchi, wondering if it was possible to doze while walking. When we finally arrived at our door, I took off my shoes and then pretty much just fell onto the tatami — but after a lot of water and a long and very hot bath, I felt like a new person.

I’m so glad we went out for Hanatōro. The festival wasn’t mentioned in any of my guidebooks, and I only found out about it by accident when browsing the web for something else. In our travels, I’ve noticed that several things make me feel instantly more comfortable in a place: getting to know the transit system, making sketches, successfully navigating for a half-day or longer. Our outing covered all those bases.