I’m in Reykjavík now, enjoying the tea I bought in the Lochaber Farm Shop outside Fort William, still thinking how weird it is that 36 hours ago I was on the train in the Highlands and hadn’t yet reached Glasgow. In the past two days I have crossed two national borders and a portion of the Atlantic Ocean, and been on a bus, a plane, a taxi, a train, and a rental car; the day before that, I was on another train and also a ferry, to visit the Isle of Skye. It’s strange indeed, but there is an unexpected continuity in going from our Highland yurt to this new island. I’ll probably write about that another time, but for now, just know that things are good. I’m feeling comfortable here, I’m not jet-lagged (it’s only about a two-hour flight), and I’ve already cooked twice today and done two loads of laundry — I feel really surprisingly nicely grounded. And it’s raining outside, so it might as well be Scotland. 😉

I’ve still got a few days of our Highlands visit to catch you up on, which means more (of course) vitally beautiful scenery.

{As always, click photos to enlarge, or mouse over for description.}

One of the big attractions of this part of the Highlands is the Jacobite Steam Train, which does an 84-mile round trip between Fort William and the coastal town of Mallaig (“MAL-egg”). It’s an old-style steam locomotive, but that’s not the reason people pay upwards of £32 (about $50) for the privilege of riding it. They pay, and do so in droves, because it’s the train used for the Hogwarts Express in the Harry Potter movies. 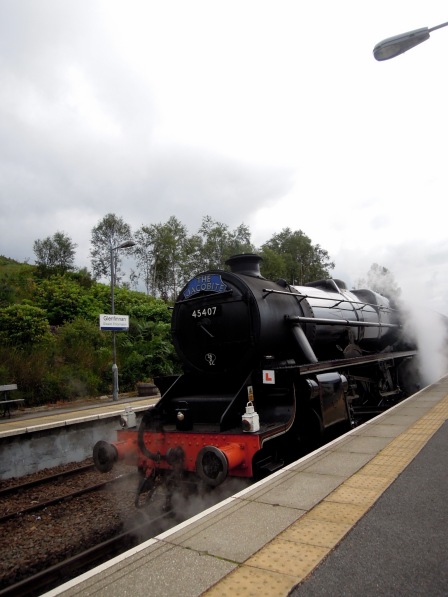 To be honest, I really wanted to do the Harry Potter train, but in online discussions people said it’s not worth it unless (a) you pay for a first-class ticket, (b) you sit on the left side of the train when you get on at Fort William, and (c) it’s not raining. A few reviewers also pointed out that there’s a regular Scotrail train that does the exact same route for much cheaper. So I decided not to book in advance, and we’d just see how we felt when we got to the Highlands.

As it happened, the day after our Cow Hill hike, we weren’t sure what to do with ourselves so we just got in the car and drove toward Mallaig. We passed some beautiful loch scenery — which Erik couldn’t appreciate, since he was too busy concentrating on the road! — and then Erik declared he did not want to drive all the way to Mallaig, so we stopped at the next most convenient town: Glenfinnan. I remembered that in the yurt camp guestbook someone had written that the Glenfinnan Dining Car (an old train car they’ve parked and turned into a restaurant) was worth a visit, and before long we spotted its sign. We parked the car and walked up some steps to the station, where we bought a trail map and realized we could walk up the hill and see the famous viaduct that’s also in the Harry Potter films. So we decided to have tea and buy takeaway sandwiches at the dining car, and then set out on the trails.

I love old railway cars. They remind me of The Boxcar Children, The Railway Children, Agatha Christie, and just generally the happy-childhood feeling of being inside a playhouse. The Pacific Dining Car in LA was one of my favorite downtown places to eat, and this one served equally delicious, if less fancy, food. Outside there was a deck with a busy bird feeder. Both the lady in the tiny station museum, and the man behind the counter in the dining car, were so sweet and nice, and it’s thanks to the man that we were able to watch the steam train arriving at the station after our tea (he alerted us, or we would have set forth to the trails without ever knowing it was there!). 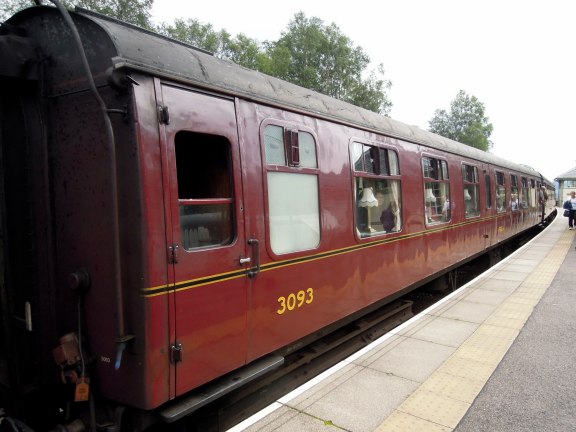 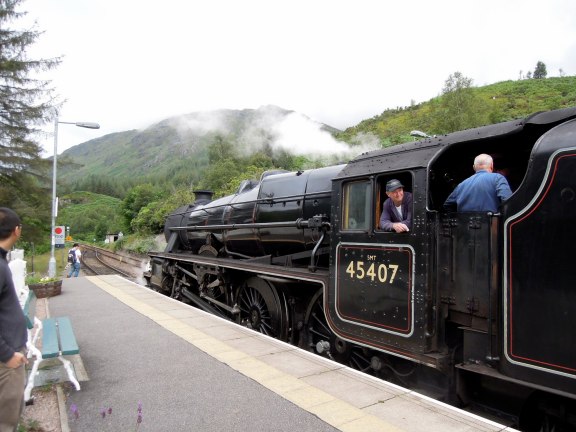 So we left for our walk very happily, having eaten, been inside a historic train car, and seen the Hogwarts Express. 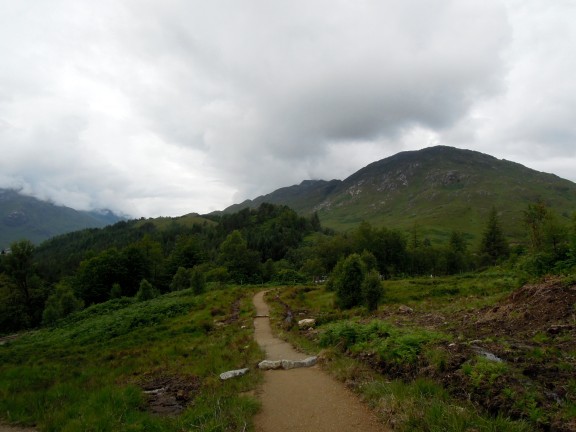 When I’d asked the woman at the museum about the viaduct trail, she hesitated and then said, “It’s not maintained, so… it will be wet.” It sounded like a caution, but she smiled and added, “But yes, the views are spectacular.”

During the first 15 or so minutes of walking, the trail was extremely pleasant, so we wondered if we were on the wrong path after all. The path was lightly wet from the rain, but not even slippery, and there were gorgeous views by the time we hit the first (very small) hill. 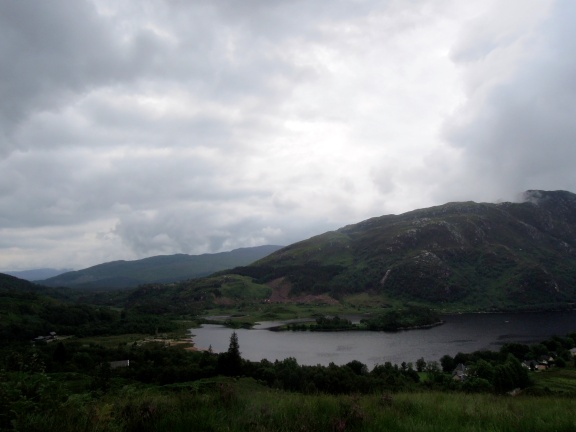 The view from the hill of Loch Shiel, with all its little inlets and islands, was so magical we could have gone home after that and still felt like we’d seen something. In fact, I considered it, but then we still hadn’t seen the viaduct — and what would we do with ourselves until it was time to eat the sammiches? So we kept walking, stopping frequently to admire the hills and loch laid before us.

Pretty soon — and I remember this as happening abruptly, but maybe it didn’t — this easy civilized path gave way to the promised “wet” trail we’d been warned about. Wet is hardly the word. Afterward I read a better description online: “boggy.” I have never ever walked on anything so squelchy for such a sustained time, not even that afternoon at Linn Park outside Glasgow. At one point my right foot sank so far into the mud that I squeaked in shock and Erik turned back in alarm. I think Erik slipped once or twice. A few other times I slipped, and once I doubled right over and my backpack, heeding gravity, fell downwards and landed on the back of my head. (Fortunately, I caught myself before my hands touched the ground, and had the presence of mind to grab my backpack so it didn’t hit the mud. So I stayed clean, except for my shoes. Gratitude again for the waterproof shoes!)

We went on for a long time like this, picking our way through the squelch and thanking nature for the grasses’ robust root systems. There were some parts of the hillside where the trail almost vanished and I wondered if we were being really stupid, going out on a muddy hillside without telling anyone where we were. What if it started pouring, as it had on Cow Hill? There was no way we’d be able to use that trail to get back if it got any wetter than it already was; we’d be wading, and in the narrower parts there simply wouldn’t be a trail anymore. But we are silly and obstinate, so we kept going. (And really, it seemed much preferable to going back through that same mud.)

Anyway… the view was spectacular, as promised.

Finally, after what felt like forever of slogging, we reached a more solid area of higher ground, and there, before and below us, was the viaduct. 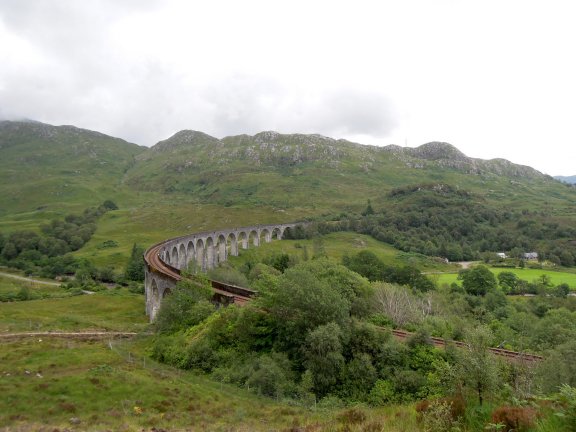 The trail sloped downward from there, and there was no more mud. We sat down on a dry stone step and ate our sandwiches from the dining car. Their brown bread was well buttered and they tasted delicious, and we had apple juice to go with them. “Is this the most beautiful place you’ve ever eaten a lunch?” I asked Erik. He thought for about thirty seconds and then replied, “Yes.” I said, “Me too.” 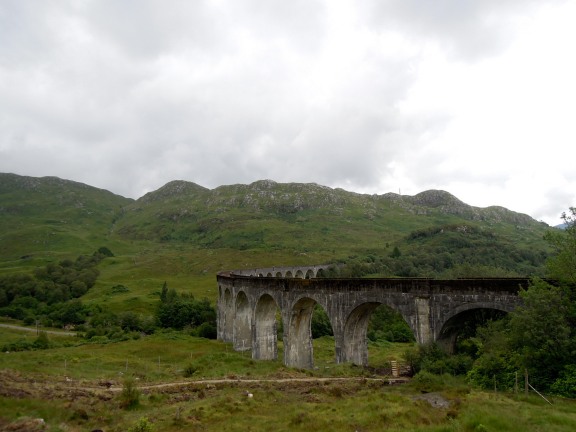 We lingered for a good while, hoping to catch a train, but there was none. So we went on down the hill, passing under the viaduct — which is pretty huge, up close.

From there it was a long, flat, unmuddy, and comparatively boring walk back to the station.

I thought that would be the end of my encounters with the Glenfinnan Viaduct, but no. On our second-to-last night of our Highlands stay, I decided our last day would be well spent visiting the Isle of Skye. Again Erik didn’t want to drive to Mallaig (where the ferry leaves for Skye — don’t worry, pics coming next week!), so we took the train — yep, the Scotrail service between Fort William and Mallaig, the same route as the Harry Potter train. And on our return journey, as the train pulled out of Glenfinnan Station, I staked out a spot at the back of the rear car and got ready to take a video of us going over the viaduct. The onboard ticket-taker tapped me on the shoulder and I thought he was going to tell me not to hold my camera out the open upper window, as I was doing.

Instead, he motioned to me to follow him to the very back, through the door marked “staff only,” into a tiny little room (a stall really). I was shaking with excitement and I barely noticed what else was in the room; I think there was some kind of control panel, but honestly, there could have been a cat in a bunk bed (heck, there could have been my cat), and I probably wouldn’t have seen it. What I saw was a wide-open window –– and not one of those awkward little upper ones — and I knew I was going to have to stick my hands and head out of it to get the view I wanted. I remembered the viaduct from Monday and I couldn’t recall any weird sticky-out things or extraneous structures along the tracks, so I figured it was safe, and went for it.

Maybe my life has been a tame one, but poking my head out of the moving train was one of the most exhilarating things I’ve done. All those breezes on my face, trying to hold the camera steady and keep my eyes peeled for any protruding trees or anything that would hurt or knock the camera out of my hands, the knowledge of getting to do something special, gratitude toward the ticket-taker, and my memory of the viaduct from just a few days prior — it was quite a lot to be feeling and calculating all at once.

Soon there was a rap on the door and the ticket-taker reappeared with a couple of other passengers, and I stepped out to give them their turn, stammering “Thanks, thanks!” I got in one good still photo before I went out, and not of the viaduct, but of the view.