Yesterday I went to the new espresso and chai bar of Indian Rice Factory, a Toronto restaurant that’s been around since 1970. Their selection wasn’t so much Indian blends as just tea in general, but the patio is beautiful. Two hours there got me both sun and rain. 🙂 (This hardly ever happens in California. Generally speaking, if it’s raining it’s raining, and if it’s sunny, it’s not going to rain later. Here in Toronto I’ve had to get used to bringing both sun hat and umbrella on my outings. Yesterday it was so humid that I was dripping sweat by the time I arrived at the chai bar, but the sky greyed over and the rain started not ten minutes after I’d sat down.) 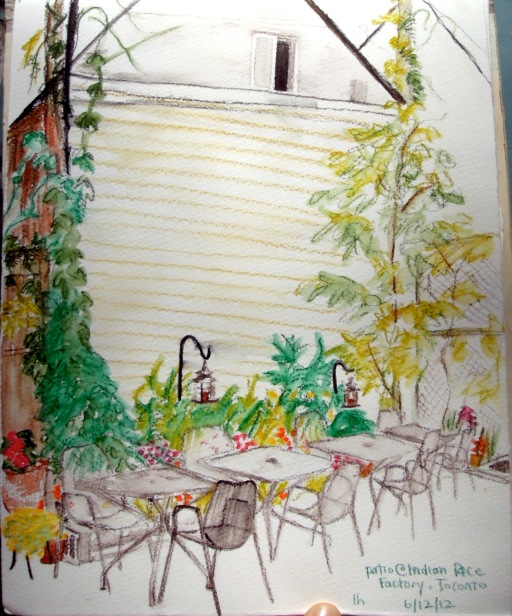 In the evening we went to the June Keyhole Sessions event (remember last month?); I’ll post photos soon. A nice day of drawing.

Also I just had to share this little video clip, which I took over the weekend at a free international drumming festival near Toronto’s beaches (beach = shore of Lake Ontario). The band, Bassment Sound Crew, introduced this as “famous YouTube song.” Alan, Munira, and Ré, this one’s for you! (Remember?)