Yesterday I took the subway to the Four Seasons Centre to hear a noon concert. To my great pleasure and amazement, the Canadian Opera Company offers these concerts free of charge, 2-4 times a week, from September to June. That alone almost makes me want to move to Toronto!

While waiting in line, I sketched the view across the street. Most of my fellow concert-goers were absorbed in conversation or reading a book, but a few of them noticed my drawing and spoke to me. Maybe sketching in public is a good way for me to meet people on my shyer days, when I’m not as willing to approach strangers on my own. 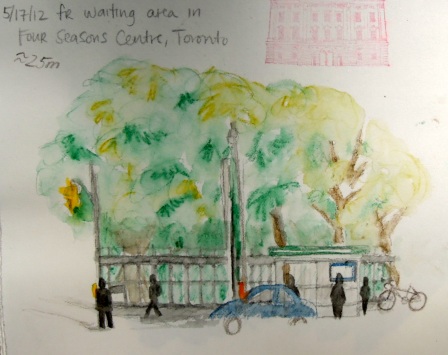 Once inside the hall, I followed the group up a couple of flights of stairs. I had assumed the performance would be in the main concert hall, but we stopped on what seemed to be the mezzanine level, and began taking seats on risers next to a grand piano. The west and north walls were all glass and we had a fantastic view of the corner of Queen Street and University Avenue. (If you read my Monday post, this is directly across from Osgoode Hall.) 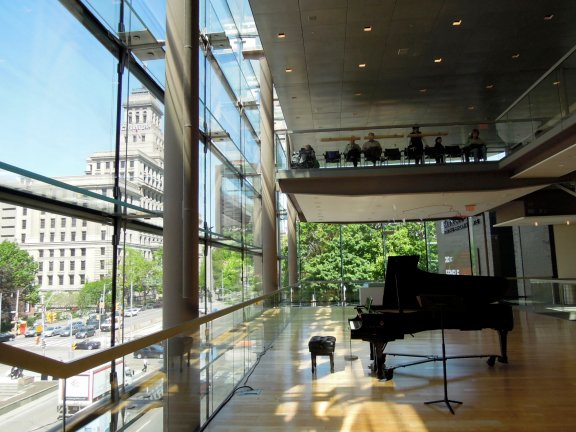 I couldn’t believe we were getting 65 minutes of live music in this gleaming light-filled space, free — and all I had to do was show up; I didn’t have to sign up for anything or reserve in advance.

We had half an hour before the concert began, so I made a quick sketch of the piano setup, and then chatted a little with the sweet lady sitting next to me. She said she tries to come to these concerts as often as she can, and they have fed her soul through a difficult time of her life. “After a concert, I just feel nourished,” she said, smiling.

The performers were baritone Adrian Kramer (my favorite male vocal range, yay!) and pianist Christopher (Topher) Mokrzewski; Kramer was making his farewell to the Ensemble Studio, the COC’s 1-3 year training program for young performers; Mokrzewski is an alumnus. They were great individually and together, very talented performers with lots of stage presence. (Bonus: while Googling Kramer, I found the website Barihunks — pronounced “bare a hunks” — which celebrates the deeper-voiced eye candy of the opera world. Who knew?)

I haven’t been to an opera since we lived in LA, and I certainly never sat as close to the stage at the Dorothy Chandler Pavilion as I was sitting to the performers here. I forgot how much acting there is in opera — it’s as much about expression and gesture as it is about musicality. The demanding Schubert “Die schöne Müllerin” song cycle is a first-person story (in 20 songs) of a wandering miller who falls in love with a beautiful miller’s daughter, only to lose her affections to a huntsman. Kramer took us through the gamut of emotions from optimism to infatuation to despair. It was a fantastic concert and I enjoyed every minute of it.

If you want to listen to the song cycle, here is a lovely interpretation online, sung by Randall Scarlata, with piano by Jeremy Denk (from the Isabella Stewart Gardner Museum in Boston, via Wikipedia). I recommend it. You may also want to read more about the song cycle, or refer to the text and English translation in this PDF file.