On Saturday we set out for what we thought would be a pleasant little walk. Somehow this outing turned into a giant loop of 11+ km (more than 7 miles) and we didn’t get home until 6 PM. It was fun, tiring, and probably a crazy thing to do. Maybe it’s because I didn’t have breakfast before we left? (Seriously, I have this weird habit of walking forever whenever I badly need to eat and drink; I’ll just keep going for miles, until I find a place that meets some unarticulated but extremely specific set of criteria for noise, light, and comfort level. I’m sure there’s some primordial biological reason for this, but I don’t know what it is.)

1. Kensington Market.
This was our original destination, described by a friend as “basically the coolest place in the world.” It reminded me of a combination of Hong Kong and Berkeley’s Telegraph Avenue. Unfortunately, the sprawling neighborhood of shops and food vendors was not a good fit for me on a too-hungry-to-stop rampage (though I did do a double-take when I spotted this store and thought it was called SATSUMAART). 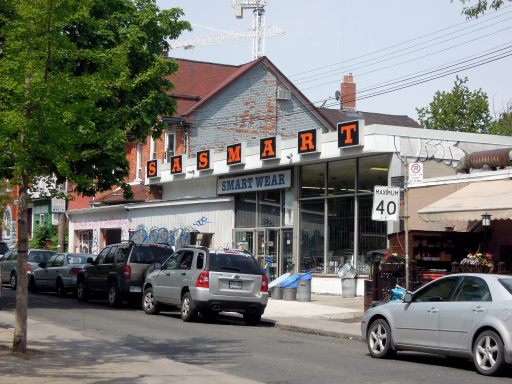 We walked up and down the market, and then sought refuge across the street in

2. Chinatown.
People have told us that this old Chinatown on Spadina Ave is no longer the hub of Chinese culture in Toronto — “it’s all Vietnamese now” — but I could not resist this:

We got two egg tarts (one with shortcrust, the other flaky), sticky rice wrapped in a lotus leaf, a steamed bun, and a Minute Maid apple juice for $3.70. The flaky crust was amazing, and we were surrounded by Cantonese-speaking grandmas, so I was very happy.

3. The Art Gallery of Ontario
Some blocks away from Spadina, we spotted a giant, sparkling, glass-and-titanium building and decided to go closer to check it out. When we realized it was the Frank Gehry-designed AGO I got excited; I’ve wanted to visit it since I saw a photo of its Baroque Stair in a magazine several years ago. In fact, to be completely honest, it was that photo that first planted the “let’s go to Toronto” seed in my mind — long before I could ever have dreamed of a world trip.

When we got inside, though, there was a long line for tickets, so we decided to return on a weekday. No point paying a $25 entrance fee (that includes the new Picasso show) to fight crowds.

4. St Lawrence Market
St Lawrence is ranked as the #1 food market in the world by National Geographic, and one of our new Toronto acquaintances called it the city’s “pride and joy.” We should have known this would make it an insufferably crowded destination on a lovely spring Saturday. We pushed our way through the first floor and down to the lower level, stood in line for fresh juices, and then escaped across the street to the farmers’ market. There we found an enticing assortment of local food, including many samples, but by then I was really tired and just wanted to sit someplace alone for a while. So we left. I think, like the AGO, this might be a place to visit on a weekday; the local farmers won’t be there, but that’s a sacrifice I’m willing to make for smaller crowds!

We did see this cool trompe l’oeil building on our way to the market, though:

5. St James Park
After the craziness of St Lawrence Market, we fled across the street to this quiet park, where we sat on the lawn, sipped our juices, and watched the pigeons. A bride and groom came by with photographers; when a little girl called out to them, “Are you married?!” the groom responded, “Not yet!” I took off my sun hat and decided to paint some of the trees into the margins of my sketchbook.

6. Cathedral Church of St James
There were several lovely churches along our day’s route, but this was the only one where we stopped and took photos. 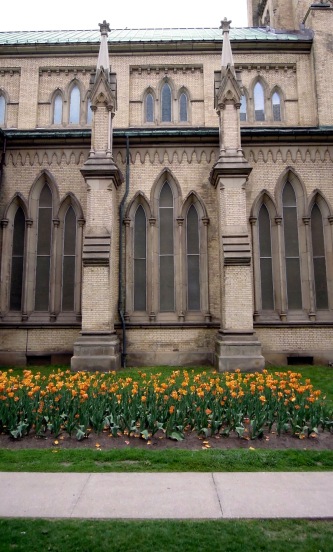 7. Courthouse Square
We found this little square by pure accident, when I looked down an alley and saw a sign for Terroni (a restaurant I liked in LA, which turns out to be Toronto-based!). It turned out the entrance to Terroni was on the other side of the block, but we spent a few minutes exploring the square (site of public hangings in the early 19th century?!). I liked the stone books. Of course we went and had pizza at Terroni afterward.

Welcoming public spaces are the pedestrian urban nomad’s oasis. And this one becomes a skating rink in winter!

9. Osgoode Hall
Half a block down from the square, we saw people slipping through wrought-iron gates into a little sanctuary of grass and trees. “What is that?” we wondered, and decided to follow and find out. The building is from the early 19th century, and has since then been a center of legal activity in Toronto.

This is a busy, popular street with everything on it. We walked a very long stretch of it and saw art galleries, chocolate shops, clothing stores, fabric stores, bead shops, restaurants, pubs, and several talented street artists (including one who swallowed a yardstick). 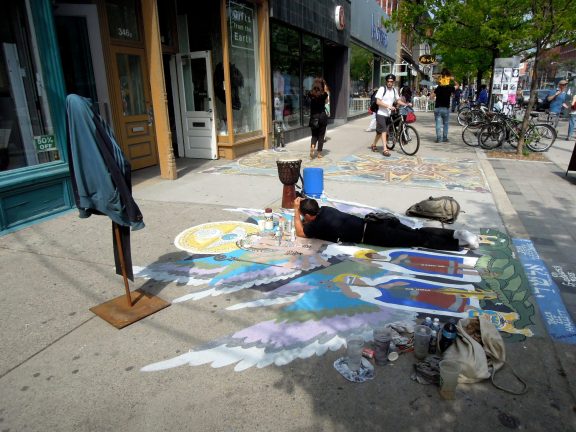 After peeking into probably a dozen shops, and buying a pair of walking shoes, we finally headed home (along #12 on the map, Gore Vale Avenue, but I’ll save the many flower photos for another post).

It was a long day and an exhausting one, but a good tour of downtown Toronto. I plan to return to several of these places on weekdays, when I’m well fed and hydrated and ready to take my time.