Happy Valentine’s Day!! I’m so pleased to share my annual card — click the image to go to it… 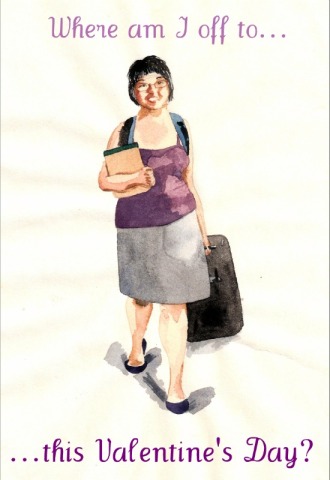 … or continue to read about my process in making this year’s card.

Every year I start brainstorming casually around mid-January; I begin to turn over how I want to sum up the past year, and how I want to lead into the coming year. At some point — usually in early February — I sit down with my sketchbook to transform my ideas into something visual. Very often, a concept that seemed great in my head doesn’t translate to drawings at all; in past years I’ve sometimes had to start over completely after days or weeks of building on one particular idea. This year, though, I didn’t have to do a whole lot of tweaking. I knew I wanted to draw a map that I could use as the new cover photo for my Facebook Timeline, and I knew I wanted to lead into it with an image of myself (as is my tradition).

I started with the map. I went online and found a printable outline world map that suited my purposes (it’s a Mercator projection, which is not the most accurate, but I chose it because I think it’s pretty). At first I wanted one with the US states and Canadian provinces as well as other countries, but I couldn’t find one I liked. Good thing, too; it was painful enough to draw, without having to worry about states!

I printed the map, laid a sheet of drawing paper over it, and used a pencil to trace only the general outline and position of the continents — nothing more. I had a feeling that if I traced the entire thing my map would look soulless and, well, traced. I then took a pen and, using the printout as well as several more detailed online maps for reference, drew the rest freehand. It was very tedious, though doubtless educational! Of course I fudged badly on many of the countries — particularly the landlocked ones — but so be it. I like the overall effect quite a lot; what it lacks in accuracy it definitely makes up for in character. I was very glad I didn’t trace the whole thing. 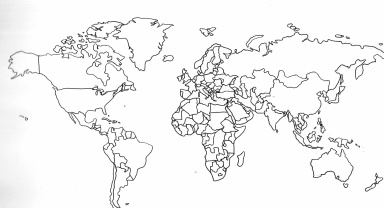 After I was done with the map, I scanned it in and digitally made the lines thicker and smoother. I printed out that new version and photocopied it onto a sheet of that thin Japanese watercolor paper I like so much. Then I began the also tedious, but much more satisfying, process of painting in the map (again looking at online reference maps, to fix up any glaring errors I’d made in the line map). After I’d finished all the land, I was exhausted, so I went to bed.

Painted map without oceans. That radiant pattern in the background is the wrinkling of the paper.

The next day, I painted in the oceans, using a mixture of blues and two different brushes. I did the details around the coastlines with the same small round #4 brush I’d used for the countries, and the larger areas with a #14 round. Inevitably, though I tried to work fast, some of the paint dried before I could blend it into the next area, so I ended up with obvious lines of demarcation. I made a diluted blend of all my blues and swirled that over the entire thing with a hake brush, and it smoothed everything over nicely. The map was done. I scanned it in and then considered what I wanted on the first page of the card.

At first I planned to draw myself and Erik carrying our traveling gear, but then that seemed too staid. I thought of something more whimsical, like Mary Poppins-style flying umbrellas, but in the end I decided I didn’t want us both on the front page of the card. This whole Valentine tradition began in an effort to foster all kinds of love on V-Day, not just romantic love; ever since the beginning, you’ll notice, I’ve deliberately avoided depicting us as a couple. But it didn’t seem right to neglect Erik in a card about our world travels. I decided he’d make an appearance on the map, but not the front page. I returned to my original idea and recruited Erik to photograph me with my wheeled duffel, backpack, and sketchbook (all of which will, indeed, go with us on the road). I can’t say I really think a tank top, skirt, and ballet flats are suitable traveling garb, but one must make some concessions to aesthetics. 😉 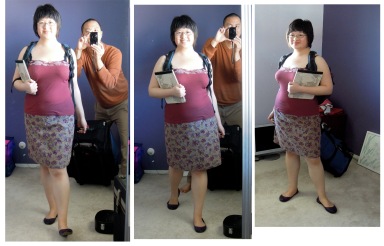 We took a number of poses, and after I’d imported the photos and looked at them on my computer, I narrowed it down to three. Rather than nitpick among the photos, however, I simply took up my sketchbook again and tried all three as drawings. That made the decision easy; the center pose clearly stood out as the most lively and the strongest statement.

I turned to a blank page and made a more careful sketch of myself in that pose, focusing especially on proportions, shapes, and outlines — I wanted it to look recognizably like me, even without fine details. 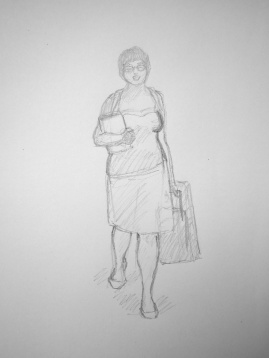 Once I was satisfied, I covered the drawing with a sheet of tracing paper and used a pen to render a cartoony, outline version of the sketch. This was the version I would work from in the final painting.

I laid another piece of the Japanese watercolor paper on top of the tracing, but then found the outline didn’t show through, and wished — not for the first time — that I had a lightbox. Then I remembered a trick I’d used once before, and taped the tracing and watercolor paper together onto my west-facing glass sliding doors. Voilà! Instant giant lightbox! My pencil tracing was done in a trice, and I was ready to paint. 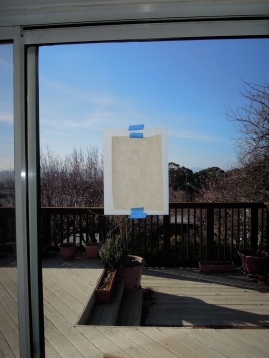 A cheaper, more eco-friendly lightbox… if you live in a sunny area!

Regular readers might remember that the last time I did a self-portrait I was very displeased with how it came out, and several of you suggested I work from a photo. It appears you were right (also, this one is much smaller — the finished figure is a mere 6½ inches tall). I’m very, very pleased with the finished painting. I think it’s one of my best yet. I scanned it in.

Finished painting of myself

After the paintings, the rest was easy. Using Picasa, I made a “polaroid” of a recent photo of Erik and me. I used Gimp (an open-source version of Photoshop) to place the “polaroid” on top of the map, and then did the text and the mini-airplane in Picnik. I created the webpages and uploaded them to my site, and that was it.

In case you didn’t click at the top of the page!

Happy Valentine’s Day, my dear loves! May the day bring you many reminders of love in all its forms.