I mentioned on Monday that our first IWL meeting started with an exercise from Twyla Tharp’s book, The Creative Habit. The book has long been one of my Inspirations. When I first read it in 2007, I did the same Creative DNA exercise Jaime assigned to us two Saturdays ago, and blogged my answers on my LiveJournal. I thought it’d be fun to revisit those old answers in comparison to the new ones, so here we go:

Your Creative Autobiography
from pp 45-46 of The Creative Habit: Learn It and Use It For Life, by Twyla Tharp with Mark Reiter. Simon and Schuster, 2003.

1. What is the first creative moment you remember? 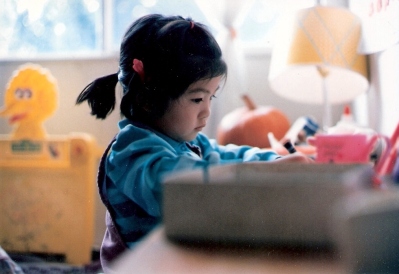 2011: Probably drawing something in my parents’ house.

2007: This is what I remember:
“I have two teachers in kindergarten, Miss Ranjana and Miss Foster. Miss Foster has long blonde hair and has a pretty way of talking. When she says ‘box’ her word is short and crisp. In the car on the way home I say ‘box’ like Miss Foster and Mama asks me why I have an English accent.

“Miss Ranjana tells us we are going to practice printing. She gives us paper with solid lines and dotted lines. I already know how to print. I begin to draw bubble letters like the ones on the cover of my favorite book. They are round and puffy, like the noodles in alphabet soup. My classmates notice and start to watch me draw. Miss Foster appears and I show her what I’ve done.

“She says, ‘We told you to print. This is not printing.’

“She takes the sheet from me and gives me a new one. I begin to print the alphabet. My classmates return to their own worksheets. I am ashamed. I did not know I was breaking the rules.”

2. Was anyone there to witness or appreciate it?

3. What is the best idea you’ve ever had?

2011: I don’t know about “ever,” but lately it would be an idea I had about how to visually introduce all the family members/characters in the family history graphic novel.

2007: Deciding not to have a traditional wedding. This isn’t the decision I made after we got engaged; this was a decision made years earlier, in high school, during an evening out at the symphony. Maybe this isn’t the best idea ever, but it’s what came to mind.

4. What made it great in your mind?

2011: It’s funny, meaningful on many levels, and is a different twist on a trick used by lots of graphic novelists.

2007: It was a total rethinking of what I wanted out of my future, and it was based totally on my own desires, not the expectations of society or anyone I knew.

5. What is the dumbest idea?

2007: Going to grad school? Again, this might not be the dumbest idea I’ve ever had, but it’s what I thought of first.

2011: Overcommitting seems to be nearly always based on external motivations, not internal.

2007: I was swayed by others’ expectations and by my own rather fantastical dreams. I never properly thought it through realistically.

7. Can you connect the dots that led you to this idea?

2011: The tendency comes from thinking I have to be perfect, the best, and/or superwoman. I guess the operative word there would be and.

2007: Yes. The dots go back to high school probably, when I wondered what would become of me and college seemed the only answer. Later, in college, when I still wondered, grad school became the answer.

8. What is your creative ambition?

2007: To write a graphic novel and illustrate it myself through drawing or (preferably) painting.

9. What are the obstacles to this ambition?

2011: My skill level, and the strength of my commitment to the project.

2007: Not being good enough at art. Not being disciplined enough with my writing. Getting published will be an obstacle only once the book is written.

10. What are the vital steps to achieving this ambition?

2007: Art classes: drawing and painting. Writing regularly. Getting feedback on my work, and assessing it with a critical eye.

2011: I vary on nearly every other morning ritual, but there’s always breakfast!

2007: Checking email and favorite websites, eating breakfast, and usually feeling guilty and uncertain already about what I’m supposed to be doing instead of checking email and eating a leisurely breakfast. At least the breakfasts are healthy.

12. What are your habits? What patterns do you repeat?

2011: I go overboard with all things: I overeat, I overcommit, I spend too much time at the computer.

2007: I’m constantly checking email, making to-do lists (with mixed success), playing games on the computer, and procrastinating. Every week I have dinner with my friends, go to Pilates on Saturdays, go to the farmers’ market if I need to, and watch a movie with Jason and Erik (when he’s in town). I’ve also developed some more sporadic habits, tasks I do regularly in the general sense but not in a daily or weekly sense: stretching and yoga, writing, reading (not just my old favorite children’s books).

2011: The book I wrote for the Young Authors’ Faire when I was fourth grade. It had something to do with animals… I think there was a fox character and the cover was cornflower blue. It’s still in my parents’ garage somewhere.

2007: The senior thesis I wrote in my junior year at Berkeley, on San Francisco Chinese restaurants from 1848 to 1915. I researched and wrote it over one obsessive semester. Later I presented it at events and conferences. I’m sure there were many earlier successful creations throughout my childhood and adolescence, but I can’t bother to think back to those.

2007: The short story, “Bridges,” I named above. It’s a creative retelling of scenes from my childhood and teenage years.

2011: They’re both books I wrote for an assignment or outside project, that were (aside from that initial impetus) completely self-generated: content, form, text, image.

2007: Both were written for a class, and never revised (I should do that). The thesis was a nonfiction historical work, the story was a creative nonfiction autobiographical work. I felt very proud and happy when I completed each, and I still feel proud and happy about them.

16. What are your attitudes toward: money, power, praise, rivals, work, play?

2007: money: I like it very much. Erik and I recently sat down and made a list of all the non-rent things we pay for each month that we’re unwilling to compromise on — so, excluding “fun” things like concerts, restaurants, and clothes shopping — and the amount was horrific. I do think we could get by with less, but obviously I’d hve to change my lifestyle quite a lot.
power: I don’t need it, but I do want respect.
praise: I acknowledge my weakness and admit that I really need it.
rivals: I’m not good at coping with rivals.
work: I have a hard time sticking to my work.
play: Play is good!

17. Which artists do you admire most?

18. Why are they your role models?

2011: They told their own stories in their own way.

2007: They all created something very different than what already existed, and remained very true to themselves in doing so.

19. What do you and your role models have in common?

2011: We are women and, perhaps, unexpected artists?

2007: I hope it’s that loyalty to my unique and personal vision.

20. Does anyone in your life regularly inspire you?

2007: She’ll be surprised to read this, but Margaret does.

2011: A source of inspiration, energy, and momentum.

2007: Someone who makes one want to create. Teachers do this for me, but that’s not a muse exactly.

23. When confronted with superior intelligence or talent, how do you respond?

2007: With grudging respect, but also with jealousy and despair. On the surface it probably just looks like respect.

24. When faced with stupidity, hostility, intransigence, laziness, or indifference in others, how do you respond?

25. When faced with impending success or the threat of failure, how do you respond?

26. When you work, do you love the process or the result?

2011: The result. I love the process only if the result seems like it’s going to be good.

2007: I love the process, but only when I’m in it, not before or after. That there will be a result and that I will be pleased with it is a given.

27. At what moments do you feel your reach exceeds your grasp?

2007: These days I fear it often. Usually, it’s when I see truly great work, or even just work that is better than mine. At these moments I fear my reach will always exceed my grasp, and I despair.

28. What is your ideal creative activity?

2007: Writing and drawing or painting, with maybe some collage/craft-type work thrown in.

29. What is your greatest fear?

2011: Always grasping, never appreciating what is.

30. What is the likelihood of either of the answers to the previous two questions happening?

2007: That I’ll write or draw/paint for the rest of my life: pretty good I hope, about 75%. Mediocrity: Not very likely but still quite possible, about 40%.

31. Which of your answers would you most like to change?

2007: They’re all related.
#27, or the disabling consequences of my fear that I’ll never be good at anything (mediocrity again!).
#23, my acute discomfort with greater talents, is I’m sure due entirely to that fear.
#29, fear of mediocrity, is a good impetus for working harder, but a terrible fear to live with when one’s work habits are (like mine) not very good.

2011: Celebration and acceptance in the moment, and drive/ambition in the long run.

2007: To have one’s skill be second nature, to have achieved a deep internal understanding of one’s work.

It saddens me that at this point in my life I have reached this level of mastery only in having guests over.

33. What is your greatest dream?

2011: To feel like I’ve arrived — at whatever that destination is.