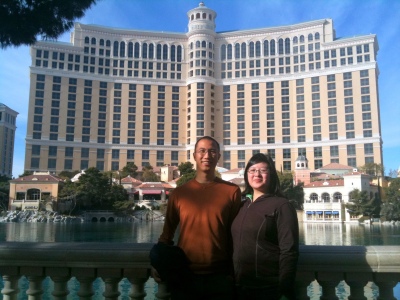 In front of the Bellagio

Erik and I spent the weekend in Las Vegas, arriving there Saturday afternoon and returning Monday after lunchtime. Neither of us had ever been there before, though we have dear friends who adore the city. One of them, Jason, was running the Rock ‘N’ Roll Marathon on Sunday, so we flew out to support him and reunite with a couple of other LA friends. It was a fun, exhausting, and slightly overwhelming trip, and yet I’m feeling totally energized and balanced this week, go figure. The very craziness of Vegas, combined with the reading I did en route (more on this in later posts), seemed to be just what I needed to get everything on track again. 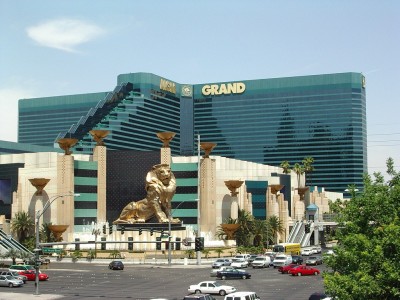 Before we left for Vegas, I was strangely nervous. I’m always a little anxious about unfamiliar places, and I didn’t know anything about the city and refused to research it because I didn’t want to prejudice myself. When we arrived, I was surprised how much it reminded me of the new side of Macau, only with desert and mountains in the background instead of ocean! At Jason’s suggestion, we were all staying in the MGM Grand, a mind-boggling megalith (but then all the hotels on the Strip are insanely huge) located right on what Wikipedia tells me is one of the busiest intersections in the country. Along with its restaurants, theatres, and casino amenities, the MGM boasts a lion habitat with genuine lions… we saw two of them on Saturday afternoon, young ones lying around resting, their giant paws reminding me of Tisha’s big feet. There was a rodeo event going on all weekend, so everywhere we looked, we saw cowboy hat-wearing guests right alongside the Asian tourists and miniskirt-clad drinks waitresses, and the music playing on the sound system was always country (which, luckily, I like). 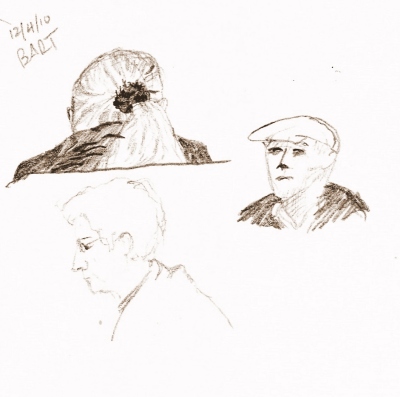 Sketches on the train to SFO

Since I don’t drink or gamble, and have no interest in paying for expensive shows or “girls girls girls direct to you in 20 min,” our Vegas getaway was quite a tame one. We walked a great deal (14 miles on Sunday, my pedometer informed me!), ate at five different buffets ranging from the sorry to the superb, cheered Jason on, and hung out and talked in our hotel rooms. But Vegas itself assails the senses. From the moment we left the taxi to the moment we entered our room, we were surrounded by a cacophony of noise and spectacle. First there were the crowds, and the sheer size of everything. You can never get to anything in a hotel — not your room, not the restrooms or the restaurants — without first fighting your way through the casino and other entertainment areas. In the MGM, the ceilings are low and the ambient lighting dim, so it was like navigating an underground passage punctuated with cartoony slot machines and their various bips and boops. I’m well used to crowds, but having to push through such a populated, loud expanse every time we needed to go anywhere took its toll after a while. At the end of each day my hair smelled of smoke and my skin felt dry and coated in the dirt and excitement of so many thousands of people. It was like living upstairs from a bar… a big, big bar. 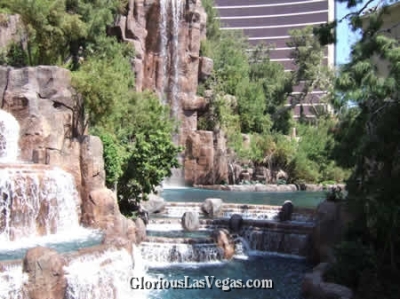 Waterfall at the Wynn. Photo from gloriouslasvegas.com

Second, it was such a manufactured experience. “Like Disneyland for grownups,” we all said, gazing up at the skyscrapers of New York-New York and the half-scale Eiffel Tower of Paris Las Vegas. I felt like I was living the Mouse Market in reverse — instead of everything else being miniaturized, I was the tiny one, walking through a world of gigantic proportions, where everything has been prepared to lure me into this unreal fantasyland. Out on the sidewalks, music blares from every building, and giant signs and billboards beckon us to Cirque du Soleil or burlesque shows. There’s almost nothing to do that isn’t inside a hotel/resort, and since MGM owns 11 of those in Vegas, it’s like being in the paw of the giant lion. I enjoyed the fake waterways, the festive indoor holiday “gardens,” the prime rib and mashed potatoes at the Wynn buffet, and the marble floor and shower in my hotel room… but the whole experience was so surreal, now that I’m home, it kind of feels like it never happened. 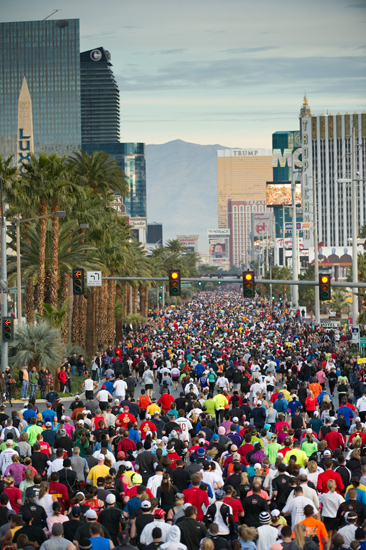 Marathon runners on the Strip. Photos from las-vegas.competitor.com.

The part that felt most authentic was watching Jason run in the marathon, but that also had its share of the surreal. They closed the Strip to auto traffic, so when we walked Jason to the starting line at 6:30 AM, we could stand in the middle of Las Vegas Boulevard and watch the sun rise over the Sphinx at the Luxor… along with thousands and thousands of other runners and their supporters, like a horde of slow-moving zombies (with the occasional runner warming up with high knees or side jumps) converging inevitably on their shared destination. All day long, as we traversed the race course to cheer Jason on at agreed-upon mile markers, the runners kept coming and coming: thousands of male and female Elvii (or Elvises, if you prefer), women in bridal veils (there was an optional detour through a wedding chapel), wiry fast athletes and slow, lumbering recent couch potatoes. While our friend did his 26.2 miles, we walked, ate breakfast, walked some more, took a nap, and walked again to wait for him at the finish line. After he did, we sat for a time on the asphalt, then walked (or limped, in my case; this was the day of the 14 miles) back to the hotel, rested again, went to dinner, came back and talked, went out for a late-night snack (leaving Jason happily recovering in bed), then came back and collapsed into bed. That was the only full day of our trip.

Not that I recommend this as a regular fix, but swinging to extremes always helps me find balance, and it helps to live that extreme for at least the length of a weekend. After two or more days of unstinting excess, I feel such a craving for the comfortable, healthy, no-drama familiarity of my normal life. Even if the house is a mess, it’s my own mess, and I can clean it up when I feel like. The morning after our return from Vegas, I sat down with my journal and my breakfast and felt so grateful for hot oatmeal with raisins, a glass of filtered water, my own kitchen table, and the sun coming in through the long windows. I’m glad we went and saw a new city with our old friends, and I’m even gladder now to be home. 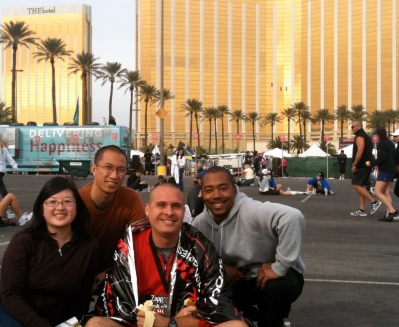 Here we are with Jason after the marathon! My best friend Jackie is taking the picture, so she’s not in it. The fancy gold structure in the background is the Mandalay Bay.