Since Tisha’s passing, I’ve been feeling highly comfort-zone-y. Staying home, eating chocolate cookies, not answering the phone — it’s been all very nice. But yesterday a simple piece of paper forced me out, literally out of the house and very much out of my comfort zone. This paper was an about-to-expire Groupon for the Capoeira Arts Center in Berkeley, bought months and months ago in a fit of health and optimism. Capoeira, a Brazilian martial art, has been on my radar since I heard about it years ago; in fact, I even used it in a short story I wrote in 2005. But I’ve kept putting off the classes, telling myself I need to get in better shape before I try anything as active as capoeira.

I play such a mind game when I’m scared. My brain offers many excuses: Traffic is too bad at that hour. There’s no parking. It costs too much. I don’t have time for something like that. I don’t have energy. It’ll be too crowded. It’s a bad week. Underneath these plausible-sounding reasons are the real ones: I’m out of shape and slow, and I feel self-loathing whenever I see my hips at three-quarters view in the mirror. I feel ugly today. My skin looks bad. I don’t like being a beginner and not knowing things, and I especially don’t like being a beginner when everyone around me has more experience. The teachers won’t give me extra help — or worse, they will. Each one of these fears hits at some soft, tender, old vulnerability that emerges at its squishiest, most cowering form when I’m not feeling my best.

If you’d given me this Groupon in 2002 I would have jumped on it like a homemade frosted chocolate cake. There were so many things I couldn’t wait to do at that age, like learn Argentine tango or all the languages taught at school. I made it through a good portion of that list — I began yoga, Pilates, and modern dance, and mastered the basics in French and Portuguese. I’m always saying so, but those were days when I really thought I could do anything. At the time I thought I was confident, but I know now I wasn’t — I was just cocky. I didn’t realize there was a difference until I lost the cockiness and found nothing there to replace it. Since then, I’ve been slowly learning confidence, the real confidence that enables one to reply to “you suck” with eye contact and “you’re wrong.” This confidence has grown fairly strong where art-making is concerned, but when it comes to physical capability and looks? My self-belief is as weak as my pec muscles. 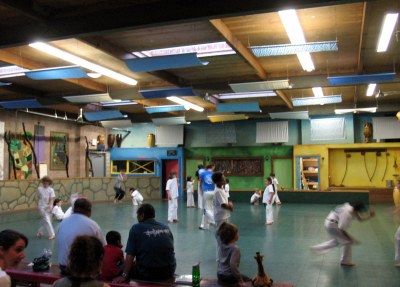 But, luckily for my body, I already let two other Groupons expire this month, and my pride wouldn’t let capoeira be the third. I went to the center and was greeted by a lovely warm woman who, thank god, looked like someone you’d want to hug and have tea with, not like a fitness model. She explained the center to me, then I had about 20 minutes to watch the beginning children’s class. It did not make me feel better. By the time the adult class began, 10 minutes late, I was feeling actively nervous.

As it turns out, I was right to be worried about my stamina — I was dizzy, dry-mouthed, and exhausted after the first 10 minutes — but not about my ability to follow. It was no harder than a dance class in an unfamiliar style, and in fact, the movements were much easier than many of the dance classes I’ve dropped in to. I think I got lucky in that there were a few other total beginners, so we all got paired together and didn’t have to do what the other students were practicing. The teacher was encouraging, but he didn’t mess around — in one hour we learned the basic movement (ginga), two attack kicks (meia lua de frente and armada) individually and combined, and two defensive moves (cocorinha and aú). When we started class the teacher said, “Maybe tomorrow you won’t be able to walk,” and I thought he was exaggerating, but truly, my calves are forcing me into a bit of a hobble.

I think it’ll be good for me to go to some more capoeira classes. At the end of class we had to spar with the more experienced students (verrrry slowly, of course). Regarding the sparring, the teacher said, “It’s like any game, only when you learn chess, they teach you all the rules before you sit down to play. Here, it’s like you sit down first, and each time the opponent makes a move, that’s how you learn.” Sounds like good exercise for my inner control freak.