Last night I had a tough time sleeping. I was stressed about everything I have to do this week, and I was feeling kind of blue and thoughtful to boot. Plus I had chocolate in the afternoon: never a good idea (I’m very sensitive to caffeine), but I do it constantly all the same. So I fell asleep and then woke up again and couldn’t relax, but it was one of the fruitful 3 AM waking sessions, not one of the angsty ones. I like the productive ones, even if they cost me some energy the next day. I’m awake, but not fully so, and I have nothing else to do so my mind just thinks — but it’s a dreamlike, meandering process, not the left-brain analytical thinking I do in my waking hours, and so I usually end up taking my ideas to good places. What usually happens, last night no exception, is that I think my ideas out until I’ve thought up every last detail, then I can’t rest until I get up and write them down. I think I’ve mentioned before, these kinds of nighttime brainstorms have made me very good at writing in the dark! Then I get back into bed and my brain keeps worrying the idea a little more, until I generate one or two more little thoughts that are usually decent but not earth-shattering. At some point I decide that’s all I’m coming up with that night, and I fall asleep. In the morning, I find my after-dark scribbles, remember those last couple of thoughts before sleep, add those to the sheet, and get my breakfast with a sense of tired satisfaction that my day’s work is already begun.

I spent this morning out at the gym and running craft-supply errands. I really hate going to big-box chain stores, but it seems impossible to avoid. Where else does one get things like self-adhesive labels and plastic storage bags? (And why are these things so freakin’ expensive? $12 for labels, are you joking?!) Once inside the store, shopping becomes inordinately time-consuming, because the stores are so big and so poorly laid out that I can never find what I need — and when I do, it’s only a sort-of version of what I wanted, at a higher price than I hoped to pay, so I have to wander around some more trying to see if there’s anything else that will fit the bill for cheaper. Usually the answer is no, but it takes time to figure that out, and by then I just want to give up and get out of there. Ugh. Luckily there was dim sum to restore my spirits. 🙂

I spent part of the afternoon communicating with a fellow artist for whom I’m making a custom cash apron. Our convos have been taking up lots of my precious time, but I have to admit it’s been really fun. She has a strong sense of what she’s looking for, and she’s able to articulate these ideas clearly, without being fussy or overbearing. I think it’s going to be a pretty cool apron, and definitely a step up from the simple one I’ve been making. Of course I’ll post photos when I’ve got something to show! 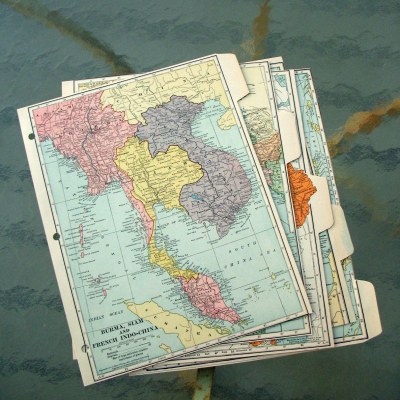 The late part of the afternoon went to getting started on one of the ideas I had last night: binder dividers, covered with antique maps, wallpapers, or any of the other cool papers I have around the house. I spent a good bit of time figuring out the tab size and shape, then making sturdy cardboard templates. Then I had to hunker down outside in the breeze to do the spray-gluing. Augh, I hate that stuff, but it does its job so well.

The map dividers came out beautifully. I also started a set using a hand-printed antique wallpaper I found at East Bay Depot last weekend, but I ran out of cardstock. I think I’m going to go scour the thrift shops around town to try to find some more, though I don’t hold out much hope. I hate to buy fresh stock when I’m going to cover it up anyway. Surely there are old manila folders sitting around someplace… maybe even back at the Depot? And I’ve just remembered I have some old wall calendar covers in my decoupage stash, too, so I’ll use those next.

I’ve been thinking more about pricing lately. It hit me today, while I was putting down so much money at Staples and Jo-Ann, that I’m never going to be able even to break even on my crafting… unless I let go of the mindset that I have to keep competitive with Etsy prices.* I know I’ve been repeating this all over this blog in different forms, but it’s just so hard to remember when I’m online seeing other people selling their wares for ridiculously cheap. I keep my prices low in hopes of making sales, but I’m not making that many sales anyway, so I might as well raise them and see what happens. And I’ll sleep a lot better at night, too, knowing I’m charging a fairer price for my time.

*And when I say “break even” I’m referring not just to money, but to time.