Right, I noted last night what I wanted to put in my journal today. Now with rice cooking and no more obligations for the day, I can write. The rice is a fairly big deal because I hardly ever eat rice on my own anymore. I usually get home so late that by the time I can prepare food I’m already hungry, so rice seems like it takes too long, and I end up making noodles instead. I like noodles better, but sometimes one just wants some variety. So on this lovely (chilly) afternoon I am making TWO kinds of rice! Ha! I am so with it.

This is going to be a long entry, but with pictures.

Chinese food again
My ricemaking mission, actually, is also inspired by my current research. Finally, finally, after fretting about it all winter break, I have some direction again for my independent study. It makes such a difference just to be motivated again, to be actually excited about it again. I don’t have a definitive topic yet, or even a specific research question; all I know is I would like to explore the nexus between the culinary traditions of China and America, as manifested in the gastronomic habits of Chinese Americans. I’m sorry. That sounded like one of those sentences I hate. Rephrase. I’m curious about what Chinese immigrants to the US did when they came here and found none of the foods or tools they were accustomed to, and that some of their traditional cooking methods would no longer be feasible. This is the story of cross-cultural food connections worldwide and through history, really. Right now I’m looking at cookbooks as a starting point, taking Chinese cookbooks written for an American but non-Chinese audience and just noticing what ingredient substitutions they make, what kind of techniques they recommend, etc. Last night I was having a lot of fun with this and was thinking of getting a bit ambitious and broadening the project to include related topics, too, like food/cooking suppliers (to see what actually was available in stores).

I met with my professor yesterday afternoon to talk about my project (and be highly entertained by his anecdotes… and his language), and afterward went straight to the biosciences library to look at their cookbooks. I spent a couple of hours there looking through just a few, but they were such gems. I have to share.

The first, Chop Suey: A Collection of Simplified Chinese Recipes Adapted for the American Home by Mei-Mei Ling (B.S. Home Economics, University of Hawaii, M.A. Home Economics Education, Columbia) and published in Hawaii in 1953, has mostly very simple recipes easily prepared with any household ingredients, but the instructions on “How to Give a Chinese Party” made me laugh. There is a suggestion for how to word the invitation:

CLANG!
Join us for an evening in Old Cathay
Cymbals sound at 7
Tuesday, September 5th, in our humble abode
Come in pants, pajamas, or what have you

There is also a list of Chinese greetings, with confusing phonetic spelling for the Cantonese. If you spoke no Chinese and had never heard it spoken, would you understand how to pronounce “Mähn, mähn seck”? (“Take your time and eat slowly”, but people use it like “bon appétit”) Would you use it on your guests? And then there are instructions for how to play a drinking game–because you know those funny Chinese like to drink and gamble!

Another book is Recipes from San Francisco’s Great Chinese Restaurants (1976), by Jinx Morgan, who according to the front matter is also the co-author of Saucepans and the Single Girl and The How to Keep Him (After You’ve Caught Him) Cookbook! Morgan includes many really interesting personal anecdotes about eating out in Chinatown, including stories about going into the kitchens of some of the restaurants. I haven’t read her book carefully yet, since there’s a lot of information in it, but here’s a sample:

Most wine fanciers feel that a fruity, moderately dry white wine best accompanies Chinese food, with rosé a second choice. Although it is not authentic to serve Western table wines with a Chinese meal, it’s a pleasant improvisation. Personally, I’m very fond of beer with Chinese food. (To tell the truth, I’m very fond of beer, period, so I suppose that colors my thinking. However, it seems to me that some of the spicier dishes from Hunan and Szechwan fairly compel the quaffing of a cold brew.)

I enjoy a funny cookbook writer. Food needs not be taken too seriously.

My favorite of the few books I looked at last night, and the book I find most endearing, is The Art of Chinese Cooking, published in 1956. It was written by a few Benedictine nuns from America! One of them had a degree in Home Economics and taught that subject for years in high schools and colleges, but they all learned Chinese cooking from the man who was their cook while they were living in Beijing. After moving to Tokyo, they began teaching Chinese cooking, to earn their keep, and apparently developed a fair following. This book is adorable. The nuns’ real love of the food, and the care they take in the process, is obvious. Behold their note on soy sauce:

This is as important in Chinese cookery as salt in American cookery. It adds distinctive flavor to food and makes of an unpalatable dish one fit for a king. Soy sauce, though salty, is not entirely interchangeable with salt. In these recipes soy sauce means either the Japanese shoyu or the Chinese chiang yu. None of the American soy sauces should be used in the same amounts. If you cannot get the Japanese or Chinese variety, we caution you to use the American variety very carefully and to taste frequently to judge the correct amount. Use only a few drops; it is very salty and much more concentrated than the Oriental brands.

The book has adorable illustrations throughout, which just go to show that Japanese decorative artists have been drawing strange but cute animal-and-food combinations (and making toys based on these drawings) for decades. Each recipe title is written out in English, Wade-Giles romanization, and Chinese characters. There are proverbs in Chinese and English printed on the bottom of about every two pages. So cute. Oh, and the good sisters refer to wonton, egg roll, and potsticker wraps as “doilies”. As good a term as any, as far as I’m concerned, and far more descriptive.

Here’s a detail from the recipe for Pork and Peas.
[image link broken]

Wood dance
This week we’ve been lucky enough to have three guest instructors in our dance class, all dancers from the Wood Dance Company, which is in the middle of a three-week residency at Berkeley. It’s amazingly energizing to have young instructors who are still actively dancing. Wood Dance is my new favorite company. The technique is very, very athletic and can be very fast paced, but it’s intuitive and exuberant and, I think, very beautiful. If you have Quicktime installed on your computer, I urge you to check out this video clip [link broken] to get an idea of what their style is. Have your sound on. Of course what we did in class wasn’t at this level, but the energy and flow are the same.

Yesterday’s instructor, I think her name is Gayla, got me really moving around and testing my limits, and I think her class collapsed some sort of mindblock I’ve had for most of my life. She kept telling us (sometimes looking pointedly at me) to be brave and challenge ourselves, and I’ve noticed a real difference in my mental state. Of course, it has only been a day, but I think she and Leslie (who taught us on Monday) really made me feel like a dancer. Such such such a good feeling.

Self-indulgence
Partly because I’ve been feeling so fearless and so pleased with my self this week, and partly inspired by Hedy Lamarr’s famous quote (“Any girl can be glamorous. All you have to do is stand still and look stupid.”), I spent a few hours last night playing dress-up and taking pictures of myself. I knew getting a camera would be a bad idea for procrastination! See the album here or check out my whole picture page here. [links broken, but I’ve re-uploaded some of the images below] 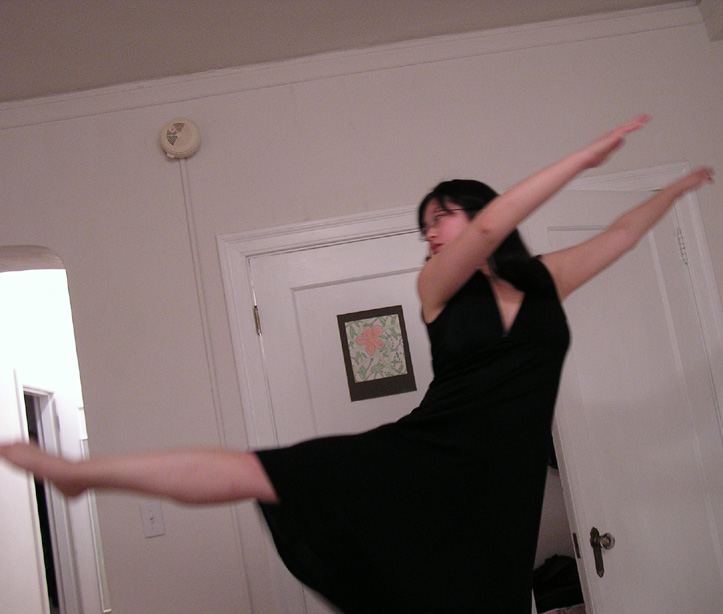 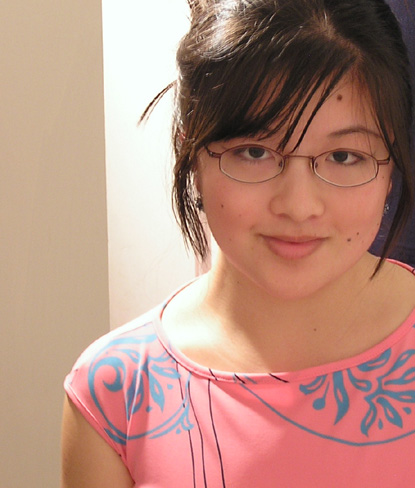 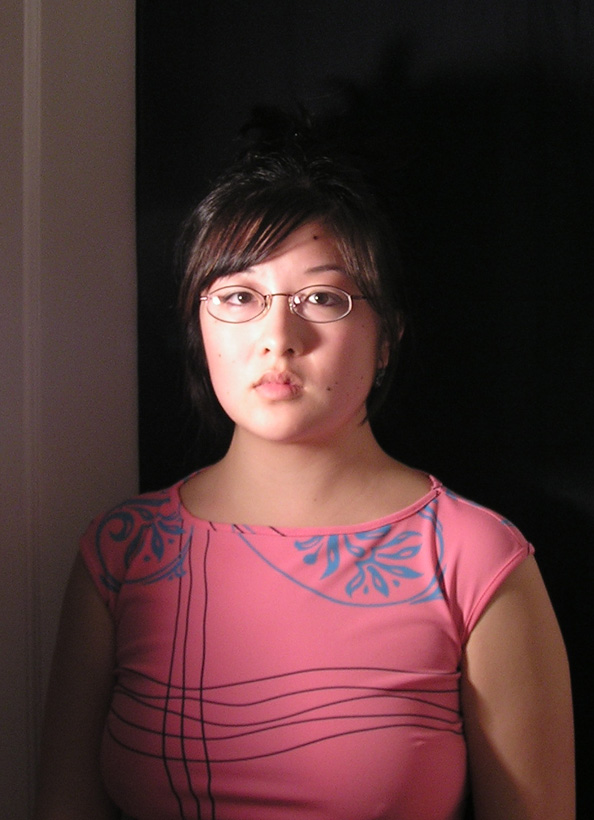 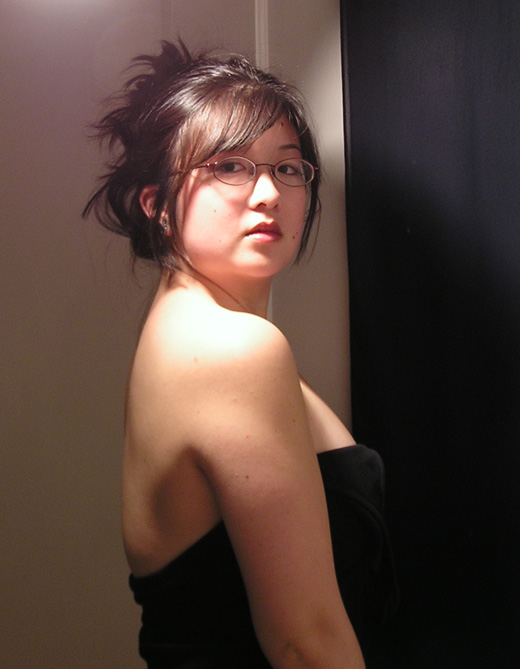 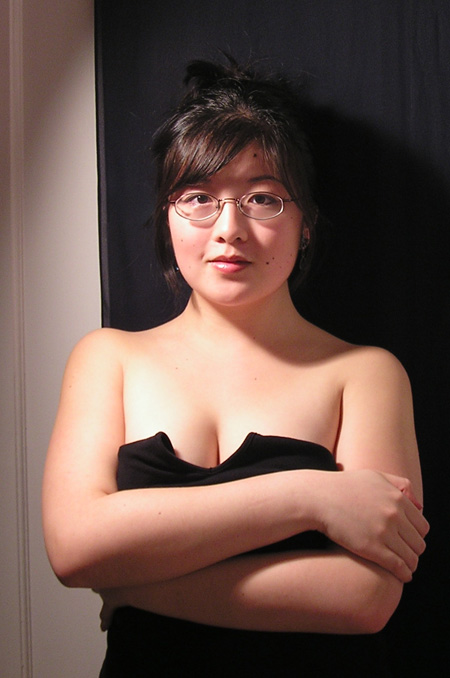 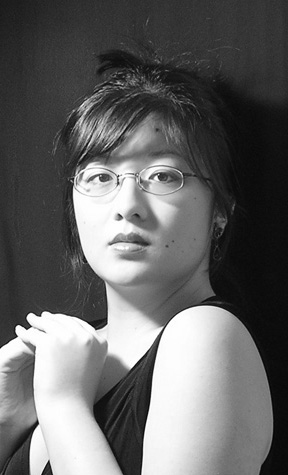 Thank you for reading. 🙂

currently: hungry and about to go investigate that rice I cooked