Since I now have a camera, I can illustrate my entries, sort of. Some of the links are photos. [links broken, but photos inserted]

Yay for being done with finals. I love that productive feeling of so-many-things-to-do when all the obligations have nothing to do with school: making/wrapping Christmas presents and cards, organizing my apartment, all that good stuff. 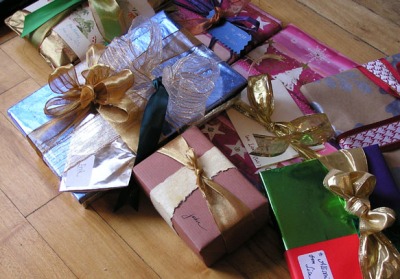 Erik is coming tonight, and we’re going to do nothing all weekend. Well, and we will make truffles. I’ve been looking forward to that for a while. I bought a 1.5″ truffle scoop and some other toys yesterday at Sur La Table, so I’ll be playing with those. I’m excited about the scoop because although it’s a little bigger than I wanted (however: Jennifer’s comment: “You have a problem with bigger chocolates?”), it’s got a… well, how to describe. You know how there are plain ice cream scoops and then there are the ones with the handles you squeeze and the little curvy thingy that runs along the bottom of the scoop to make the ice cream drop out cleanly? Yeah I don’t know what it’s called either, but this scoop has one, so hopefully I won’t end up with the mess of ganache I’ve had in the past. I know, extra ganache is not a bad thing, but the more I get out of the scoop, the better and bigger truffles you will have, so be glad I have this new scoop. Provided it works.

Anyway so back to my week. I had my CA history final on Wednesday, which went okay. My last essay was pretty bad, but at that point I just wanted to go home. I was sitting between two guys, at least one of whom was a bit… pungent… When I got out of the exam I wanted to play but Jennifer was in SF at Macy’s, so I had to play by myself. So I went to Crossroads and bought some new clothes, including a soft fuzzy burgundy blazer that is rapidly becoming my new favorite jacket. Alas, if only I could button it across the front, but for $10 you can’t have everything. ;b Afterward a nice grown-up person named Lynne picked me up, Mineisha too, to go see a dress rehearsal of the Oakland Ballet’s Nutcracker at the historic (built 1931) Paramount Theatre. It is a really stunning theatre, inside and out. 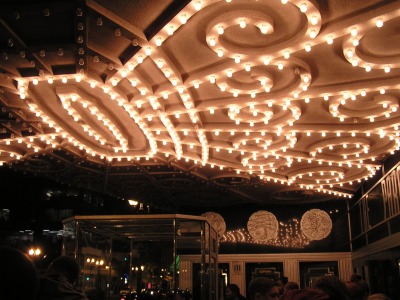 The rehearsal itself was okay. The dancers were good, but not notably so, and the sets were pretty but a bit cartoony. At one point a voice came over the music and dancing to announce to the crew that “the tree should NOT be growing right now.” (The Christmas tree can be stretched and smushed to show that the characters are growing or shrinking.) Later they stopped the whole thing to work something out. We left at intermission because Mineisha hadn’t had dinner and was hungry, so I missed my favorite dances of the program, but oh well. We went down the street to Mr Pizza Man. Mineisha and Lynne had pizza, but I had toasted raviolis. Overpriced they were, but there was a sign advertising them in the window and I just had to try them. I really think the cook just breaded normal raviolis and put them in the toaster. They were weird. I wouldn’t get them again. Anyway, I am pretty sure Mineisha had fun, and I enjoyed hanging out with her and getting to meet Lynne, who is a painter. Oh and I got to see Mineisha’s cat, Boots, who is absolutely beautiful. White with peachy orange stripey parts around her ears, and an adorable, intelligent expression. So this is the cat who likes to eat paper. She has attacked some of the chapters I’ve written for Mineisha. Wish I’d taken a picture, but I only saw her through the window.

Erik was waiting at my apartment when Lynne dropped me off, and within minutes we were on our way out to Oakland again to hear Charlie Hunter at Yoshi’s. Man I love Yoshi’s. Hugo had organized a whole bunch of people to come to the show, so we had reserved group seating, and I had a pear cider and some California Roll and was very happy. Charlie Hunter is fabulous. I am his new fan. He plays a custom designed eight-string guitar with three bass strings and five regular strings, so he sounds like he’s playing two instruments, and his sound incorporates rock and funk while still managing to sound like jazz. He’s also quite young, and so was the audience. I was one of only a few people dancing in my seat. What is wrong with young people these days?

I woke up super happy the next morning. I had lunch with Huy at Tako Sushi and we had a good talk, first since the early part of the semester. I can’t believe he’s applying to thirteen grad schools. Best of luck to him. I’m sure the people next to us thought we–or no, probably just me–were nutcases because we were talking about kids’ books (like what was the name of the rat in Charlotte’s Web) and violence on TV and grad schools and music and books and all kinds of stuff. Around two thirty he walked me to Jennifer’s so Jennifer and I could go shopping. Jennifer had been hanging out with Daniel, which is a great thing because Daniel remembered the rat’s name: Templeton. Huy had thought it began with an R, and I had remembered it as a masculine-sounding name. Is Templeton masculine-sounding? I don’t really know.

Jennifer and I walked around Fourth Street and spent lots of money. At least I did, more than I intended to. But I got presents for all the people I’d thought would be hard to shop for, namely family, so I’m pleased. A funny thing happened while I was getting Daddo’s present. I want it to be a surprise to many people so I won’t say it here, but the store had nothing in the genre I wanted except the exact thing that I wanted. I was totally tickled, and jumped up and down. While we were walking around I saw a guy with a pink knit hat and scarf. This morning I found myself in the elevator with a pink hat and scarf guy in Doe Library, so I asked if he’d been on Fourth Street yesterday and he was surprised and said yes. He and his girlfriend and I talked a wee bit. Funny. Oh and Jennifer bought the coolest present for Moony. It’s a red knitted yarn octopus with catnip in it. I would like an octopus like that, but without the catnip. Its tentacles curl up at the ends. It’s really cute.

So now it’s Friday and I have a fun weekend to look forward to!

[This post was imported on 4/10/14 from my old blog at satsumabug.livejournal.com. Photos have been re-uploaded.]