We’re flying out of these lovely islands in 9 hours’ time. Since I last wrote, we have made our way up from the southern tip of the North Island, from the west coast to Tongariro National Park (home of Mount Doom, to LOTR fans) to the east coast, where we are now. Shortly we’ll leave here and drive the last couple of hours to Auckland airport.

In Wellington (the aforementioned southern tip of the North Island), we stayed with a couple from California, also a writer and composer. We were there for less than a day, but enjoyed chatting with our host — and I made sketches from their fantastic oceanfront living room. 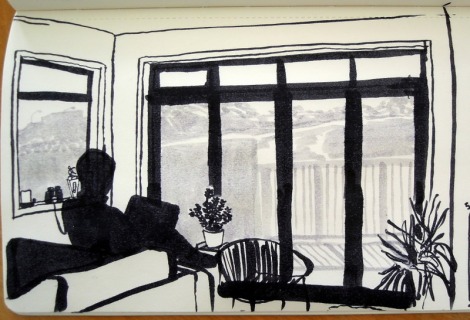 An hour north from there, we had lunch in the coastal town of Paraparaumu.

We were meeting Hinemoana, a friend of our friend Kuukua, at a cool café she suggested. Over the meal we had a lovely talk about writing, music, and Māori culture in the past and present. Be sure to check out her music!

Cutest tea cozy ever. It had “RSC” (the restaurant’s initials) embroidered on one side. Also featured: Hinemoana’s elegant hands!

The rest of the day was pretty uneventful. In passing through one town I spotted an Icebreaker outlet and went in for some shopping. When we were home over Christmas, I discovered this New Zealand merino clothing company and fell in love with their lightweight, comfy tops and bottoms. I’ve been wearing them everywhere and was pleased to get some new additions at deep discounts!

In another small town, a random windmill:

We pulled into Ohakune well after dark, taking a route that seemed totally deserted (later we found out it passes through fields and forest). 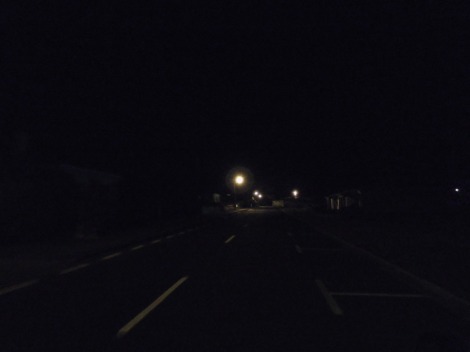 But at the B&B where we were staying, we were met with a very warm welcome from our host and the several cozy fireplaces. He made us some tea and showed us the 1906 house, and then directed us to a restaurant/pub/hotel around the corner where we had an amazingly good dinner.

The next morning, after a delicious and very hearty breakfast (including home-baked ciabatta!), we set out to explore Tongariro National Park. It’s the fourth-oldest national park in the world, and it’s huge. People go there to do long hikes, the kind that last for hours (or days?) and come with danger of hypothermia. We, on the other hand, just drove around and made some leisurely stops. There was lush forest near the entrance, but barren snowy mountain a short drive away. It’s a visitor off-season — too late for summer crowds, too early for the skiers — and we saw almost no one for hours.

The road signs amused us; the symbols were so vivid! 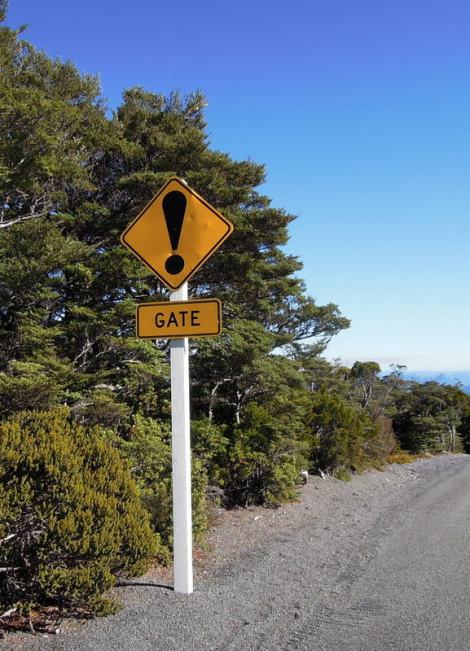 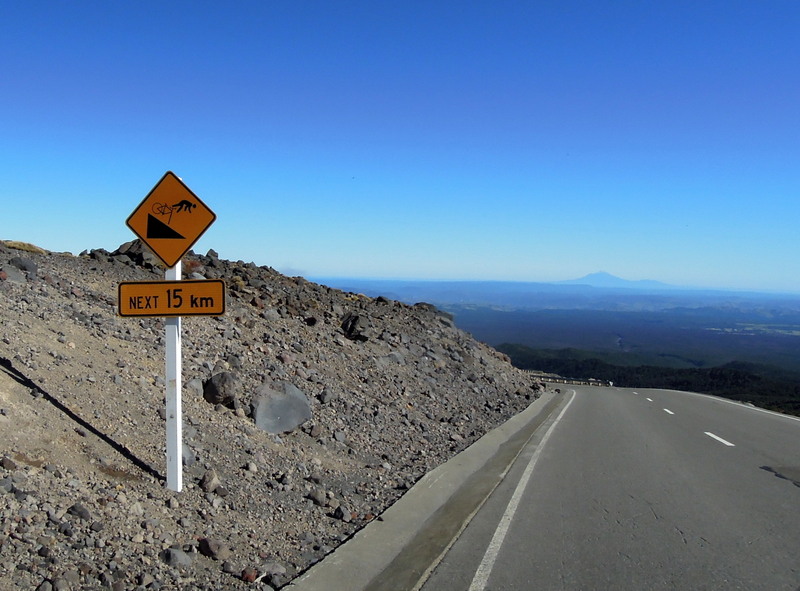 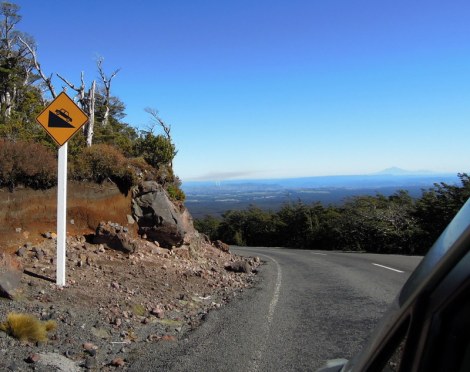 By Mount Ruapehu we pulled over and had a short explorative walk. The place reminded me strongly of Þingvellir in Iceland: similar terrain, colors, and plants; similar feeling of expansive solitude and freedom; even the time of year was almost the same (September in Iceland = May in New Zealand?). 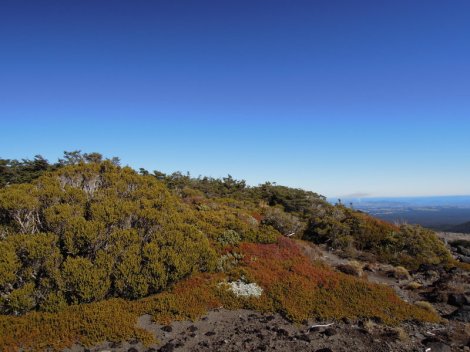 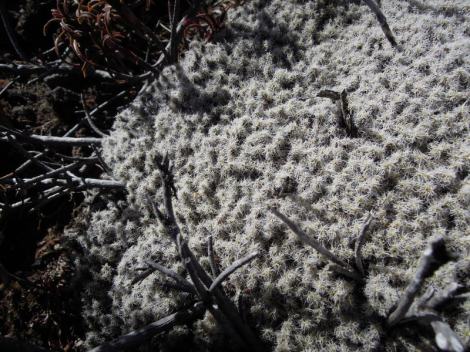 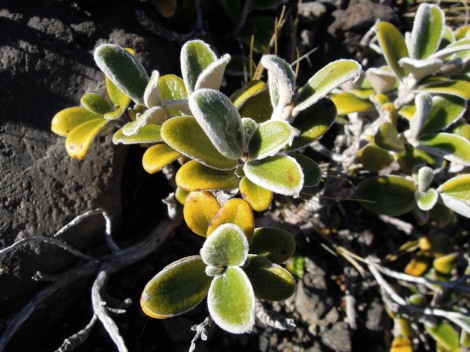 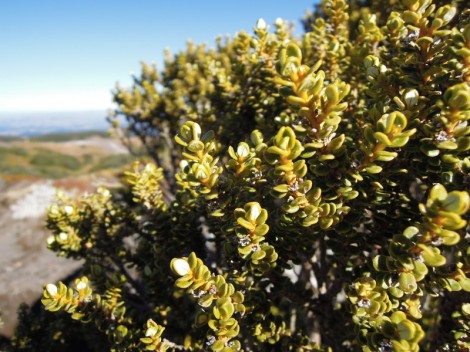 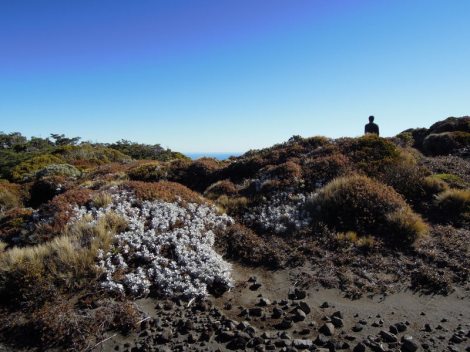 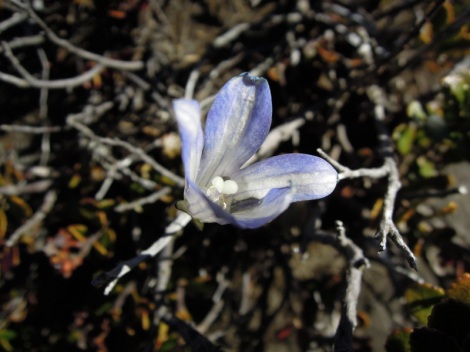 Attempting to use the self-timer: 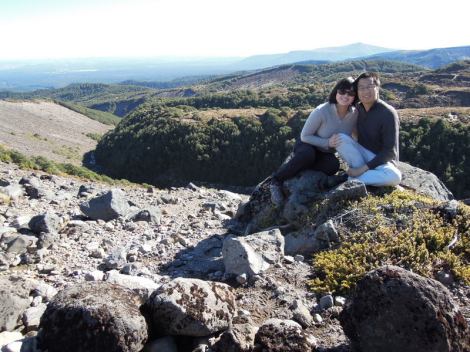 A helicopter circled overhead and we felt a bit James Bond-ish even though actually it was just helping with construction: 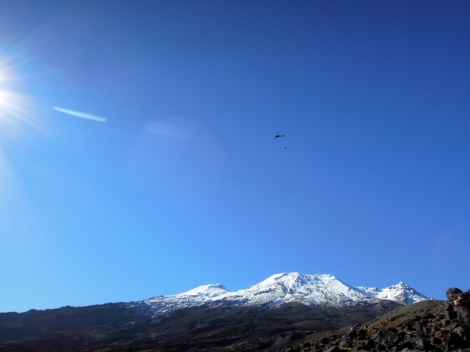 At lower elevation the plant life was quite different. 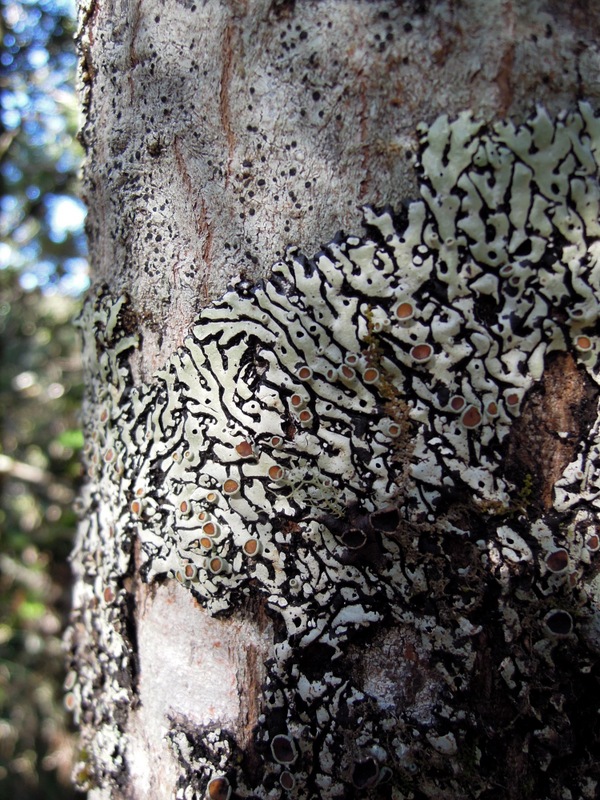 And even lower, in the forest, different yet again. We rambled along this trail for an hour and a half; we took the return walk much faster, and it only took us a half hour!

How you know this is New Zealand: silver ferns and cabbage trees.

We read that Māori used to use the upturned fern leaves to mark trails at nighttime.

The so-called cabbage tree has nothing to do with cabbage, though it was used for food. 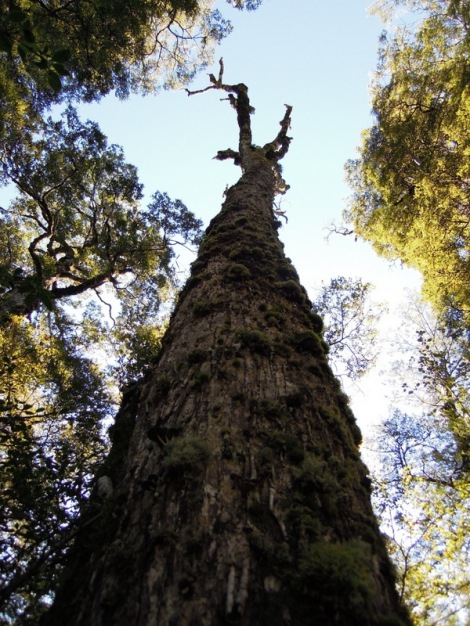 We saw a skeleton!!! And strangely enough it was not creepy, just mysterious: how did it come here? Whose is it? Who put the skull there?

If you have read this blog for any length of time, you know that I adore mushrooms. This trail made me very, very happy. 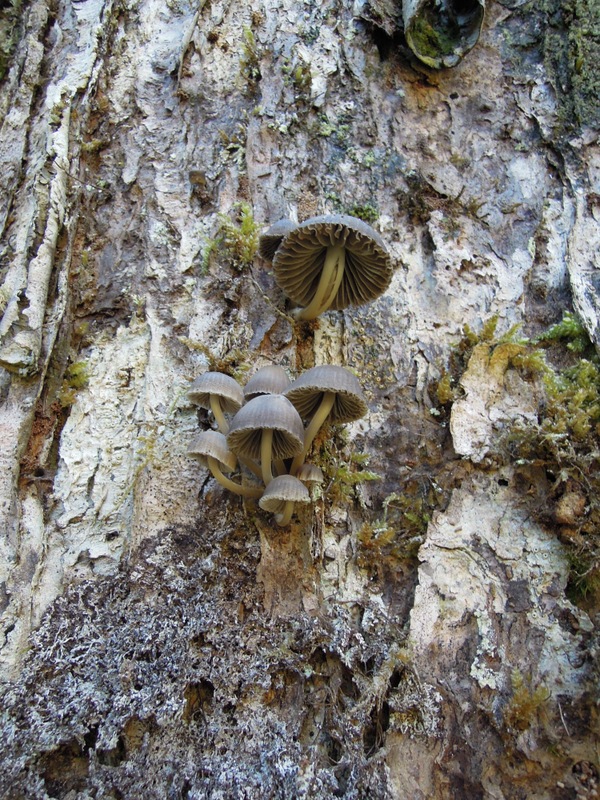 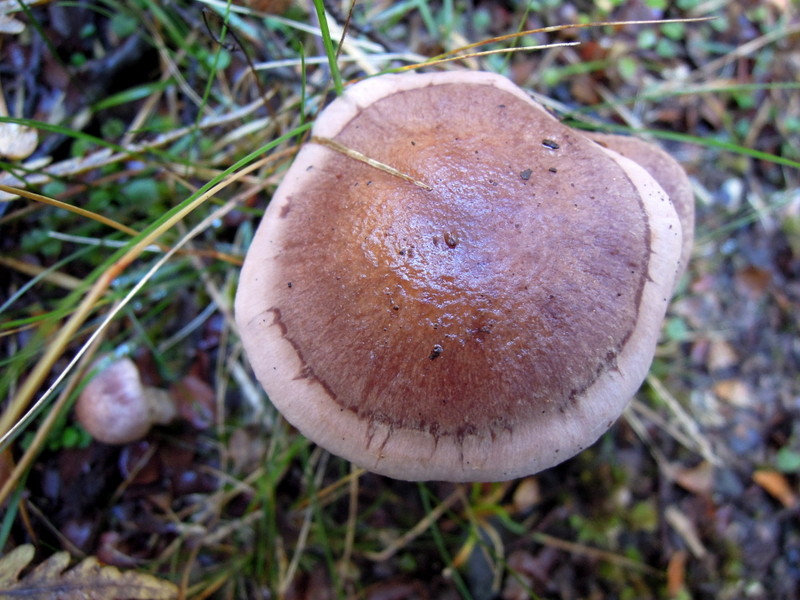 I honestly don’t know if these are mushrooms, but they’re fascinating:

This one had me jumping with excitement. I’ve never seen anything like it, at least not in person. We only saw one.

It’s quite small, you see: 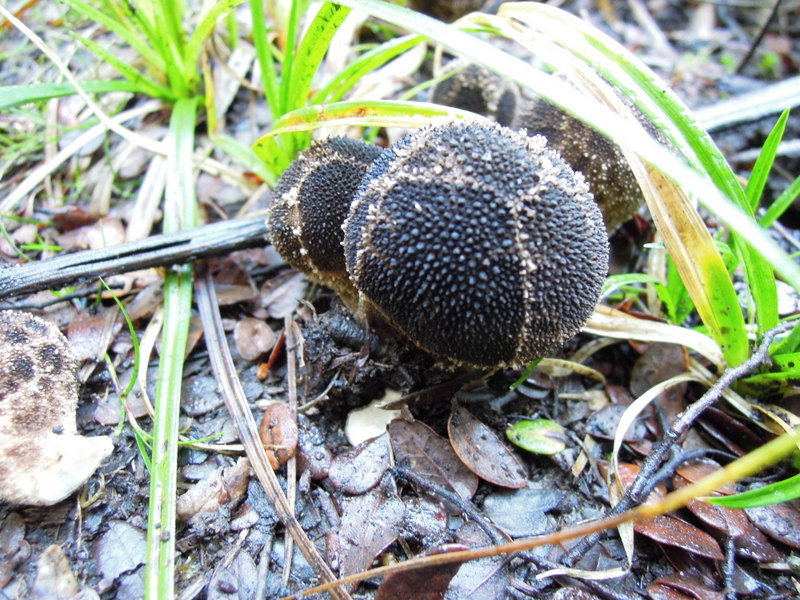 Post-walk: vanilla slice and hot lemon-honey-ginger infusion at a cute café in town. 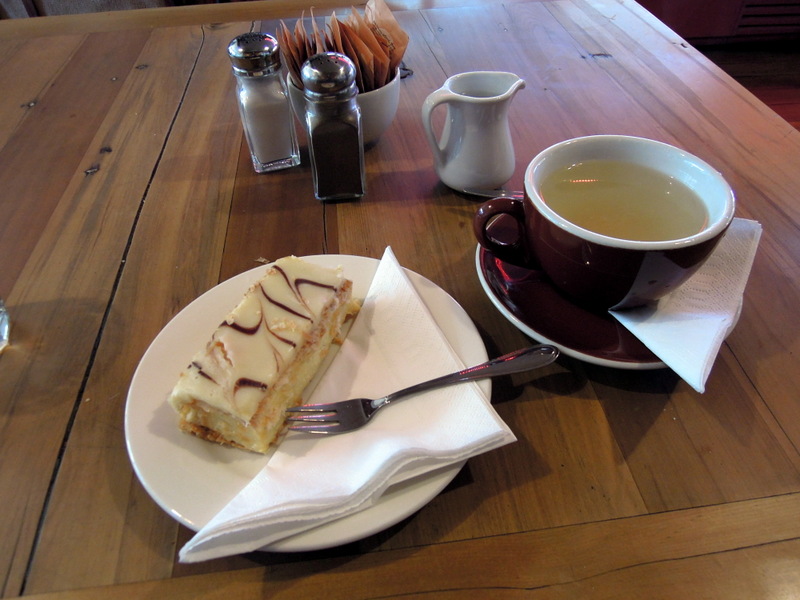 When we got back I found I still wanted to sketch, so I approached Harry, the resident Labrador. He’s already famous — one of our hosts has written a sweet children’s book in which he stars — but he’d never before served as an artist’s model. He was quite the natural at it, holding each pose just as long as I needed, and then considerately shifting to a new position after that!

Having always lived with cats only, I find dogs very hard to draw. I just don’t know them as well. Sometime last year I was attempting to draw a dog from imagination and could only turn out these sad-looking misshapen cousins of goats. So drawing Harry was a good little education!

That evening we returned to the Powderkeg for another good dinner, and the next morning I made one last sketch of Harry, in the B&B visitor book: 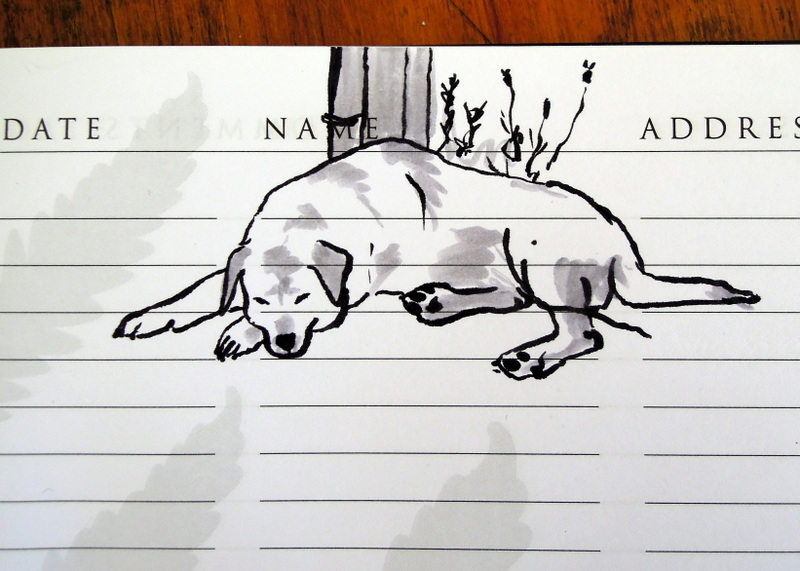 On our way out of town we made a discovery:

Our route took us past another side of Tongariro National Park. There was some very odd terrain out there — something that looked like moss-green tussocks all over black sand?! — but we didn’t stop. I snapped a few pics from the moving car.

We made a quick stop at a picnic area that turned out to be a trout centre. This pic has the reflected treetops and, if you look closely, some swimming trout. There was also a museum there and some river walks, though we couldn’t take time to investigate; Erik commented that we could easily have stretched our NZ drives across weeks rather than days. Too true.

Later we passed Lake Taupo, which is enormous and epically beautiful, especially with that long white cloud just sitting on its distant surface. 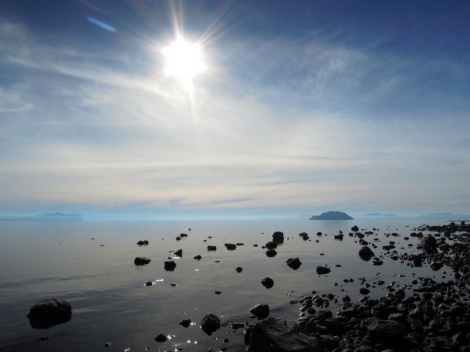 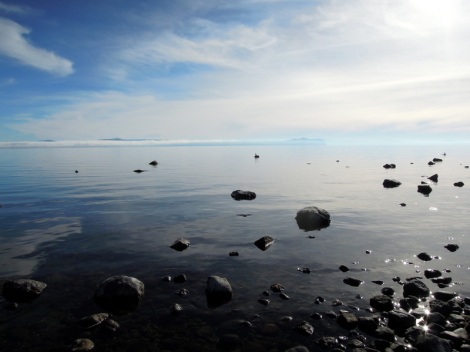 Another hour or so out from there, we saw steam rising from the earth — we’d found the geothermal areas! We were happy, remembering Iceland.

Our Ohakune host had given us directions to a hot stream, but somehow we didn’t see the turning, and passed by without finding it. Ah well. At least we’ve done it before — and this will give us something to look for, next time we visit!

In Tauranga, we arrived to hugs and this view: 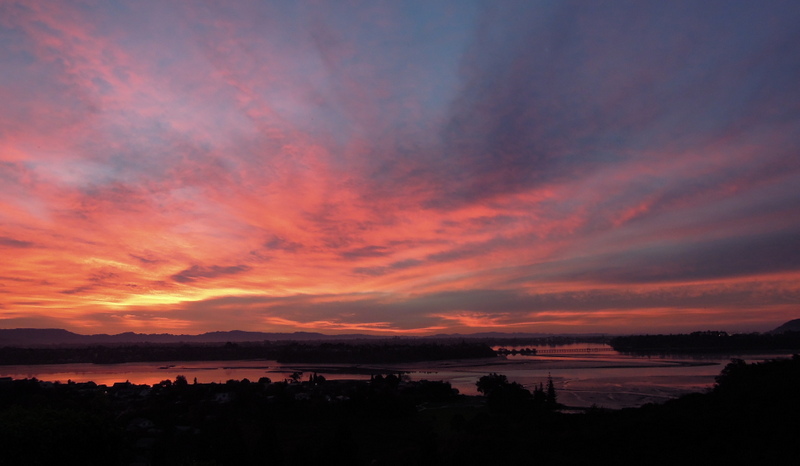 After a fabulous dinner with our hosts, we had a soak in their spa, which had colored lights and seating for… oh, nine at least. It wasn’t a hot river but it suited us fine.

I’m sorry we’re leaving New Zealand, but at the same time I am very eager to get back to North America, where we will spend the next two weeks with friends and family. After the constant moving and mapping of our road trip here, I’m looking forward to having others around to share (or even make) the decisions about what to do, where to go, and how to get there — and of course I am beyond excited to be returning to our Toronto friends (the same ones with whom we stayed when we started our trip last April!), and then to my family (we’re gathering in upstate New York for my youngest sister’s graduation). It feels like full circle.