The other day I came across this post on Anna’s (Girl in the Hat) blog, where she wrote vividly and strikingly about what writing is like for her. I’ve come across many such descriptions of writing — and creating in general — but mostly they don’t describe how I feel about it. I used to think that’s because I’m not a “serious” artist, or I haven’t yet written something long enough to be sweating blood over, I’m doing it wrong, etc. And I used to never have an answer about what writing is for me, if it’s not the tickly torment it is for so many other writers. But yesterday, after reading Anna’s post, an answer came. I wrote in her comments:

Writing is a thing I do, like lining up pinecones along a trail, or stacking fruit at the table to see if it’ll balance. Like drawing faces on the steamy shower door, like talking to cats, like opening up someone else’s cabinets so I can know what’s inside. It is simply a thing I do.

As I wrote this I could tell that it is true for me, and I wondered that I never recognized it before. It’s not that writing just flows out of me like a delicious cream sauce (mmm… cream sauce), or that I don’t struggle to find the right way to express something. But I don’t think of it as pain, or even particularly as joy, although it can be. It’s just what I do, along with the many other things I do, like making pictures, or making laughter — or making tears.

Of course, after leaving this comment, I went back and reread some of my own posts that I’d tagged with “writing,” trying to imagine how my writing would sound to someone who’d only read my comment on Anna’s post. Then I realized that, as much as I admire and envy and long to be like the writers who do things in what I think of as a “more grown-up” way, I truly love the simplicity and brightness of my words. My pictures, too. All my life I have wanted to be more of a grown-up, and all my creative life I’ve despaired because I’m not as dark and edgy and angsty as everyone around me. I never wanted to sound like a kid, even when I was a kid.

But… why not? Picasso said famously that it took him his entire life to learn to paint “like a child.” Is there really any point to trying to be a grown-up when all around me, serious adults are trying desperately to hang on to their youth? I am not a rosy-glasses recaller of childhood; I remember how much fear and helplessness and anxiety there is in being young; but there is still so much wisdom that is lost with growing older, and so much of the immediacy of life. Recently I discovered an IAmA with a four-year-old in which someone asked him (via his dad), “What do you think about the world?” He replied (also through his dad), “I think it’s pretty good, but not if you’re alone or scared or dead or something like that.” There you go!

Here’s one answer to my “why not?” A critique I have often heard of my work is that it’s lovely and fascinating and fun to read, but it “doesn’t go anywhere.” It occurs to me now that this is a good description of what kids do, too. They have creativity and imagination and unfettered-ness like we adults can never achieve, but (perhaps because of it) they don’t make statements, and they can’t create a body of work. Those things take editing, and if you’re capable of editing, you’re capable of judging, and that’s why you can’t think 100% like a kid anymore. You know too much. Does everything have to “go somewhere”? What happens if it doesn’t? Well… adults won’t like it, and now that I’m an adult, everything I create (even if it were for an audience of children) has to go through adults. But what if I don’t care about that? Is there anything intrinsically less important about work that “doesn’t go anywhere”? 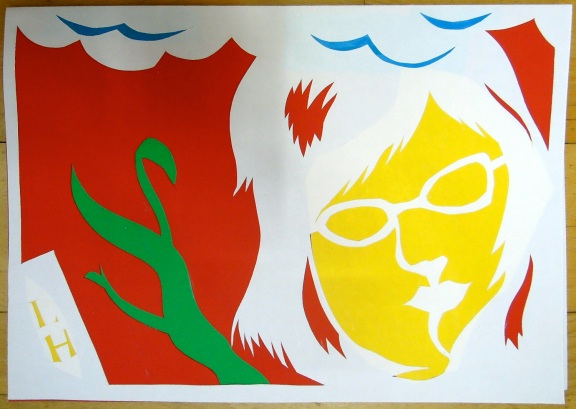 Paper cutout self-portrait I made last night at a free National Gallery of Modern Art event. Took me about 40 minutes. It was like kindergarten, with scalpels.

I’m not sure if I need an answer to that question (and I’m not sure I agree with that critique of my work anyway). It’s not really important. The important question is: having decided maybe I’m childlike and I’m okay with that, how much more can I create? (And: how much more can I live? And: is this childlike quality something the rest of you have been liking in my work for ages now, and I’m only just starting to figure it out?)

Categoriescreative philosophy
Tagsbeing a grownup, being myself, Personal insights, Writing